HOF Profile: Scott Flory, a lover of the game 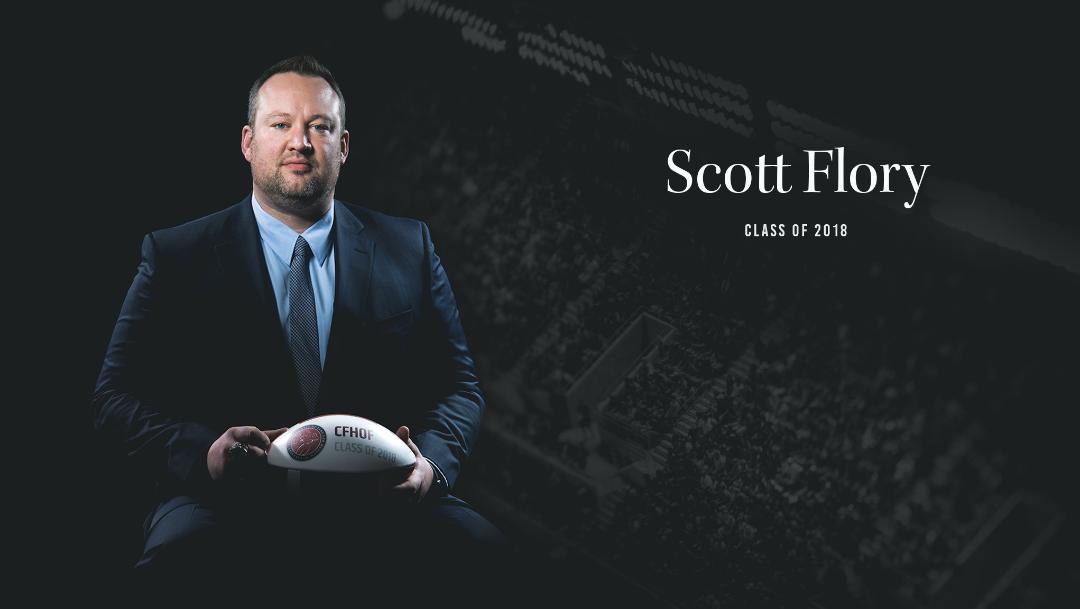 HOF Profile: Scott Flory, a lover of the game

Scott Flory isn’t sure how it happened, how at the age of 12 he was in full football gear, running out the door of his home in Regina, Saskatchewan, with one thing on his mind.

“I just remember having to run across Albert Street in Regina with my pads on, riding my bike to practice and I thought I was the coolest dude alive. I just loved playing the game, I loved being around the game. I just wanted to play,” Flory recalled.

“I don’t remember exactly how I started. If I begged my parents, if that was the process, I don’t remember but I knew that I didn’t have to be told twice about when practice was and how to get there.”

Everything about football came naturally to Flory. He came up through Regina’s minor football system and went on to play for the Saskatchewan Huskies, where he’d win a pair of Vanier Cups. A third-round pick of the Montreal Alouettes in 1998, Flory settled in with the team for the 1999 season, building a 15-year career that saw him named a CFL all-star nine times. Playing right guard, he was named the league’s top offensive lineman in 2008 and 2009. In Montreal, he was a key piece of the fortress of quarterbacking solitude that surrounded another hall of famer, Anthony Calvillo.

Those Als teams played in eight Grey Cups in 11 years, winning three. At the time,

“I was 22-years old, I had no clue,” Flory laughed, describing the situation he was walking into.

“I was just trying to get on the metro and get to and from practice. With time you gain perspective. At the time, I was just happy to be there and be a part of the team, work my butt off and play.

“I think as time goes on you gain that perspective and you realize how fortunate you are. It’s not often in the moment that you see it. I knew those guys were amazing, but I don’t think you really understand the gravity of the situation until you get a few years of experience and perspective.”

When Flory arrived in Montreal, he tried to soak up the experience of the offensive linemen around him.

“I got to play beside Brian Chiu, Uzooma Okeke, Pierre Vercheval, Neal Fort,” he said. “Those guys turned me into a professional. They set the standard and I like to think we carried that along on offensive line for a long time.”

Of course, with Calvillo becoming professional football’s all-time leading passer and teammates around them gradually being inducted into the hall of fame, the Alouettes’ offensive line did its job and let the talent that stood behind them flourish. There’s an anonymity that comes with that job and Flory loved it.

“I think that there are certain characteristics about offensive linemen that are fairly universal,” he said.

“You take your reward through the success of others. There aren’t really stats for you as an offensive lineman. You’re doing it together, it’s all five of you. All five of you share in that together and you really get your success through others.

“There aren’t stats for it and even if there were I don’t think offensive linemen would care. It’s about being together, doing their job and protecting, making sure everyone else is good. If we did our job then everyone else could do theirs. They couldn’t do theirs if we didn’t do ours. You carry a heavy burden and you take your success through others. That’s pretty unique among offensive linemen.”

Flory retired from football in 2014 and became the president of the CFL Players Association. He left that role in 2017 to round out his football journey as the head coach of the Saskatchewan Huskies.

“I knew I wanted to be a part of football. Early in my career I used to (coach clinics) in the offseasons. I’d coach youth (football) as much as I could and developed that into running camps,” he said.

“The kid that rode his bike to practice with his gear on in Regina now wears the colours of his alma mater in Saskatoon, trying to give opportunities to a new generation of football players, looking to be rewarded for the success of others.