O’Leary: Carter ‘can’t wait to get out there’ with Argos 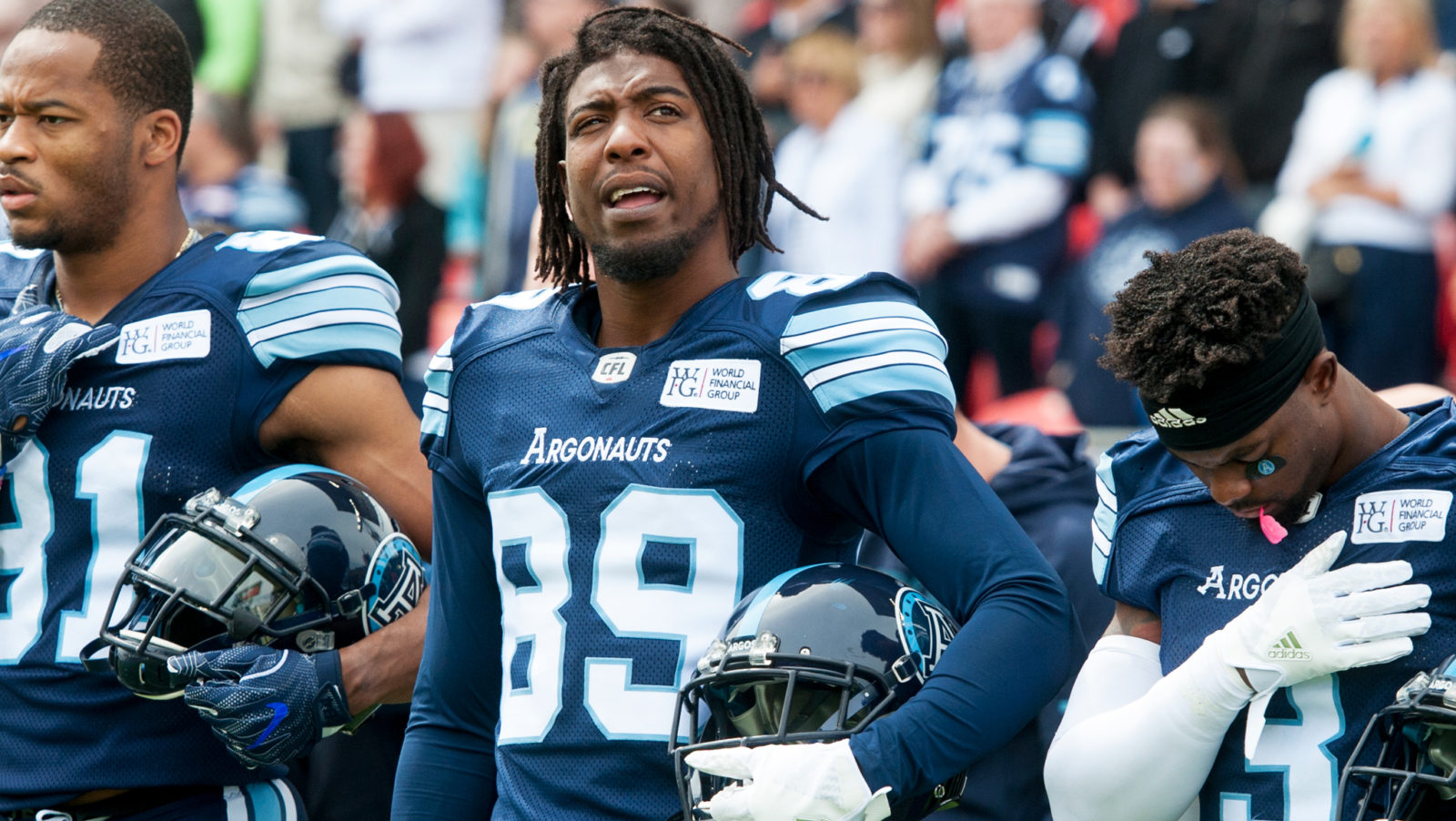 O’Leary: Carter ‘can’t wait to get out there’ with Argos

“I would anticipate waiting the rest of the week and seeing how much we can get out of him and how much of the game plan we feel good about with him in there,” he said.

“I don’t think it matters who starts as much as we’ll see how the reps are divided through the game.” 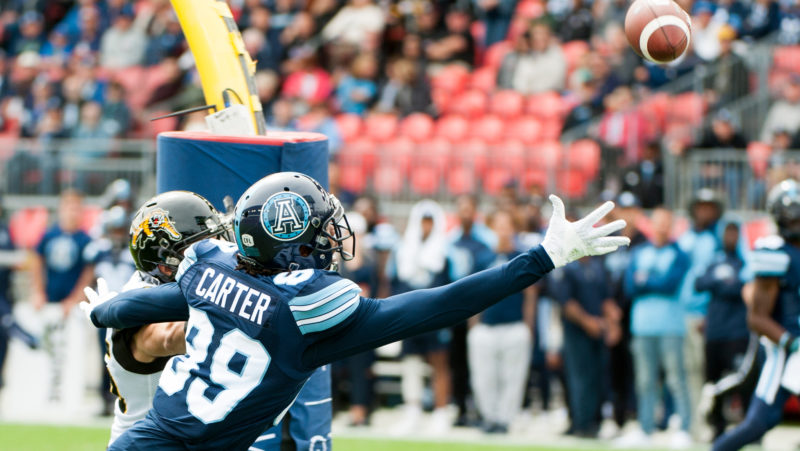 Carter misses a target during the Labour Day Rematch in Toronto (Adam Gagnon/CFL.ca)

He wasn’t trying to speak metaphorically, but he might as well have been. The start and the middle of the Toronto Argonauts’ season hasn’t gone the way they wanted it to. Sitting at 3-8, they’re three games back of second-place Hamilton and four games back of first-place Ottawa in the East. The Argos are up front about their situation. They know it’s not good and that they need a run of epic proportions to squeak into the playoffs. Forget the start. It’s about how they finish out these final seven games.

That’s where Carter comes in. Since the Argos came back from their bye week on Saturday, the uber-talented receiver has been a busy man. He’s taking more and more first-team reps in practice, hoping to build on his debut with the Argos two weeks ago.

“I think that’s the plan,” he said of an increased role in the offence. “Coach Trestman has put enough trust in me to put me in the offence, to give me some targets. That showed last game. My first play was a target to me, that’s always exciting. I can’t wait to get out there and produce for the team.”

Sitting in a three-game funk, Carter could add some punch to an offence that’s been jabby at best this season. The Argos have the second-lowest points (236 in 11 games) and the second-lowest net offence (3,393 yards) in the league. A 1000-yard receiver when he’s a regular part of the lineup, Carter has shown that he can help a team produce. With a new offence and new teammates to adapt to, Trestman said Carter’s still learning as he goes.

“I still think he’s growing, still getting used to it,” Trestman said. “We’ve got him rotating in there with Rod (Rodney Smith) and we’ll see where it goes.

“He’s got to continue to condition and get himself back into shape. I know he’s working hard at it and we’ll continue to go that way, just practice both of them, Rod as well.”

Carter said the biggest adjustment has been meeting the specific needs of Trestman and offensive coordinator and receivers’ coach Tommy Condell.

“If you let it get on you I think it is (a tough playbook),” Carter said. “It’s a whole lot of plays. Coach is going into the game with 150, 175 plays and you have to know all of them in a sense, but it’s not that hard. Once you get the basics, also the words, it’s helping. Mac (McLeod Bethel-Thompson) is a great quarterback. He explains everything.”

Start or no, Carter would love to get on the field with his former teammates on Saturday. The Riders cut him out of nowhere on Aug. 11. The Argos brought him in on Aug. 26. He didn’t record any receiving stats in his debut in the Labour Day rematch with Hamilton on Sept. 5, but he did handle some returns.

He said he’s been in contact with a number of his teammates since he left Regina. 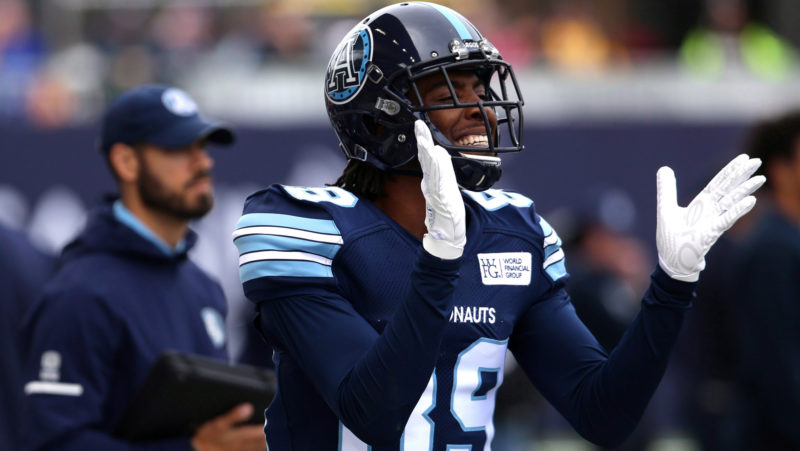 Carter will be facing his old team, Saskatchewan, this weekend in Toronto (The Canadian Press)

“Oh yeah I talk to them pretty much every day. Those are still my friends outside of football,” he said. “They can’t wait to come over and play against me and I can’t wait to see what I can do against them.

“I just want to get a win with my new team, that’s the biggest thing. Whether it’s 100 catches or zero catches I don’t want to go in there and not get the win.”

This year has been a new frustration for Trestman, who never won less than 10 games in his five seasons in Montreal. Winning the Grey Cup a year ago takes any sourness of the Argos’ 9-9 record out of the equation.

“In this league, I haven’t been on a team that’s been 3-8 and I think that’s a challenge,” Trestman said.

“I wake up in the morning thankful to have this challenge that appears to be very difficult and it is, but it’s very exciting as well. I like to feel like I’m in the business of turning a negative into a positive and we’re trying, we’re doing it each and every day. That’s all we get.”

His players are still responding on the practice field, where the effort and intensity looks the same as it did early in the season.

“We’re in a deep hole and there’s no hiding from that,” running back James Wilder said.

“You find out a lot about people when your back’s against the wall. That’s when you see what you’re about. The practices we’ve had have shown a lot about our character and what type of team we are. It takes more than effort, we have to execute on the field. But how we’re preparing excites me for what we’re going to do in the game.”