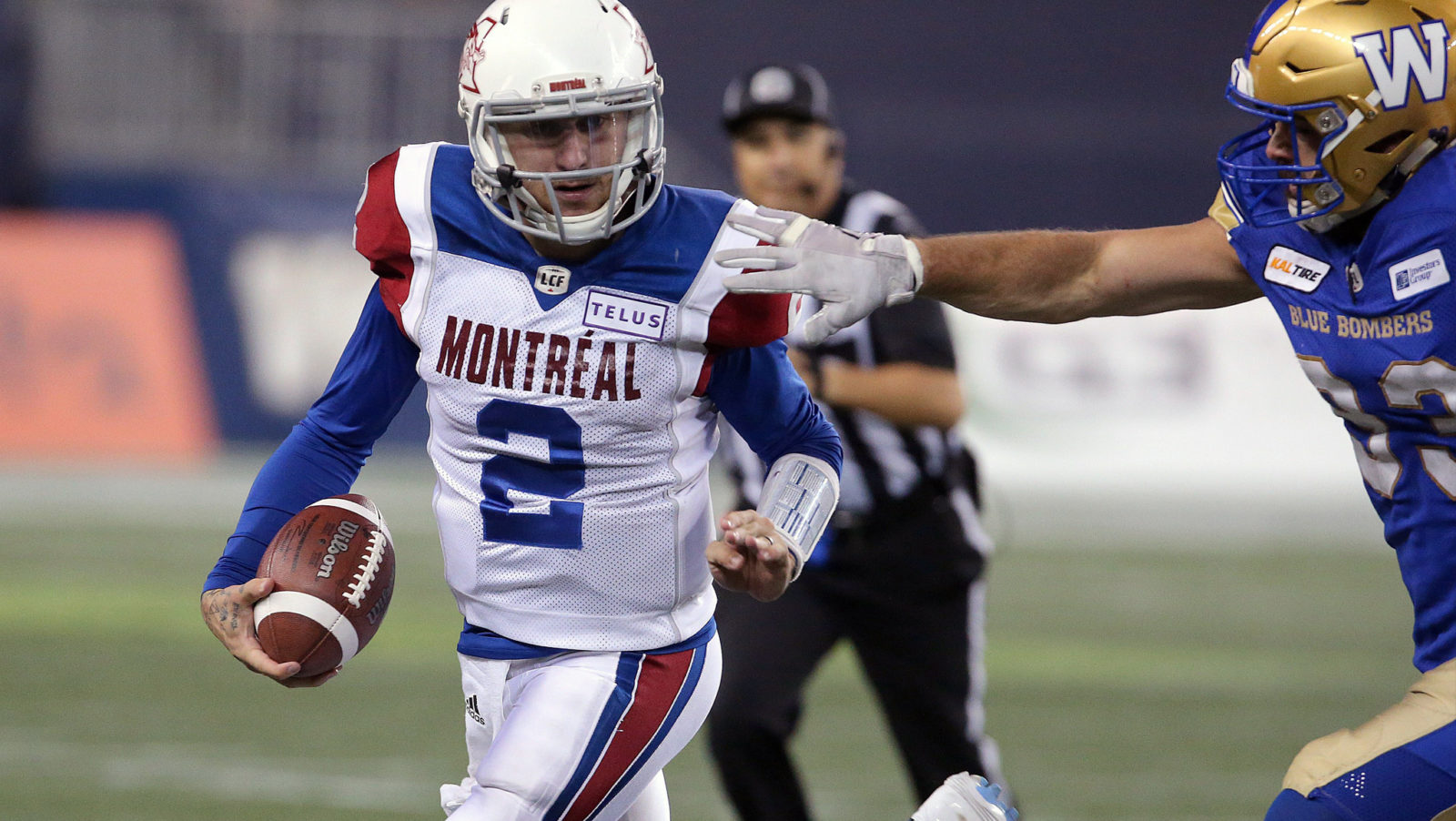 WINNIPEG — Johnny Manziel knows there may be some uncomfortable moments in this week’s film study.

On the field, however, it couldn’t be more opposite for the Montreal Alouettes’ starting quarterback.

The Als fell 31-14 to the Winnipeg Blue Bombers on Friday night at Investors Group Field, but Manziel showed improvement, by all accounts, in his third career CFL start.

“I felt really comfortable for a lot of the night, seeing the field, seeing coverages,” said Manziel, who finished the outing 18-of-25 for 212 yards and an interception. “Even though it’s a loss, from a personal standpoint of learning this game and being out on the field, there were some better things.

“Still a lot of work to be done, but I’m proud of the way our guys fought.”

RELATED
» Bombers back in the win column with win over Als
» Harris leaves game against Montreal, does not return
» Gallery: Montreal at Winnipeg

Manziel added 36 rushing yards on six attempts, and even had a 22-yard reception on a trick play in the third quarter.

There was some magic, like when he rolled out to his left and fired a drive-extending completion to B.J. Cunningham, setting up the only touchdown of the night on a sneak by Antonio Pipkin. Then there were some learning moments, including a fumble that was recovered for a Bombers touchdown, only for it to be called back on a penalty, as well as near-pick six that was dropped by Chris Randle.

The one that will stick with Manziel was the clincher. With the offence moving and his team down 10, Manziel was picked off by Bombers rookie Marcus Sayles, ending the Alouettes’ comeback bid.

“I’m a little sick right now after that last drive,” said Manziel. “I had a really good game plan pre-snap of what was going on . . . Really felt like I went through my reads. I just need to keep playing things up with my footwork. I don’t think I got as much on that ball as I could have.

“I’m hurt by it,” he added. “To put ourselves in a position like that with a drive to go and a lot of momentum to win the game, I’m sick sitting here right now with how that played out. Those guys want to win. There’s no denying the will and the want-to with this team. It’s hard. It’s hard with how hard these guys are working, to come up short like that in the end, like I said, I’m sick to my stomach.

“A million times I’ve seen that coverage . . . I’m sick here, I can picture it in my head, I see it in my head on loop over and over again. It’s hard to sit here and swallow that.”

Rookie running back William Stanback was heavily involved in the game plan and had 106 yards from scrimmage, running a handful of draws and also catching four passes. Eugene Lewis had a team-high 63 yards on four catches to lead the receivers.

Matt Nichols enjoyed a bounce back game for the Bombers, throwing for 256 yards on 18 of 25 with a touchdown, helping his team end a four-game losing streak.

The Alouettes fell behind early, with Andrew Harris scoring the game’s first touchdown and Justin Medlock converting a pair of first-half field goals to give Montreal a 13-3 lead. The Als’ offence sputtered through the first half, with three of Manziel’s first five passing attempts falling through the hands of receivers, including two drops by Adarius Bowman.

Manziel was under siege all night, his O-line struggling to contain an aggressive Bombers front, and while the Als’ pivot was able to escape some of it with his legs, he was also caught behind the line five times, with Bombers defensive end Craig Roh racking up three sacks.

In the second half, though, the offence sustained more drives. The Alouettes finished with 312 yards in all, even edging the Bombers in first downs with 24 against Winnipeg’s 21.

“We knew that on film,” Manziel said of the Bombers’ pass rush. “If you watch Winnipeg and you see them, what they have with Bighill and [Jovan Santos-Knox], they’re able to get pressure with the guys they have up front and the stunts they run. We anticipated pressure, it got to us a little bit in the first couple of drives of the game. Second half I thought we executed much better.”

Bighill left the game for the Bombers and didn’t return, as did running back Andrew Harris, handcuffing Winnipeg on both sides of the football throughout much of the second half.

The loss was the Alouettes’ second in a row, delivering another blow to the team’s playoff hopes at 3-10. The Als look to keep things alive next weekend when they host the Saskatchewan Roughriders.

In the bigger picture, though, their quarterback answered some questions, and in a positive way on Friday night. He’ll have a chance to use the final five games of the season to show he can be the long-term answer for the Alouettes behind centre, one they’ve been searching for since 2013 when Hall of Fame pivot Anthony Calvillo retired.

“I felt really comfortable all night,” said Manziel. “Pre-snap reads. Just seeing the field. I don’t think we had very many incompletions. I felt like we moved the ball well. We stalled here and there on a couple of things, but other than that I’m proud of the way we fought, and from a personal standpoint, I felt more comfortable out there.

“Five games left to continue to do that, but it’s tough to swallow right now.”