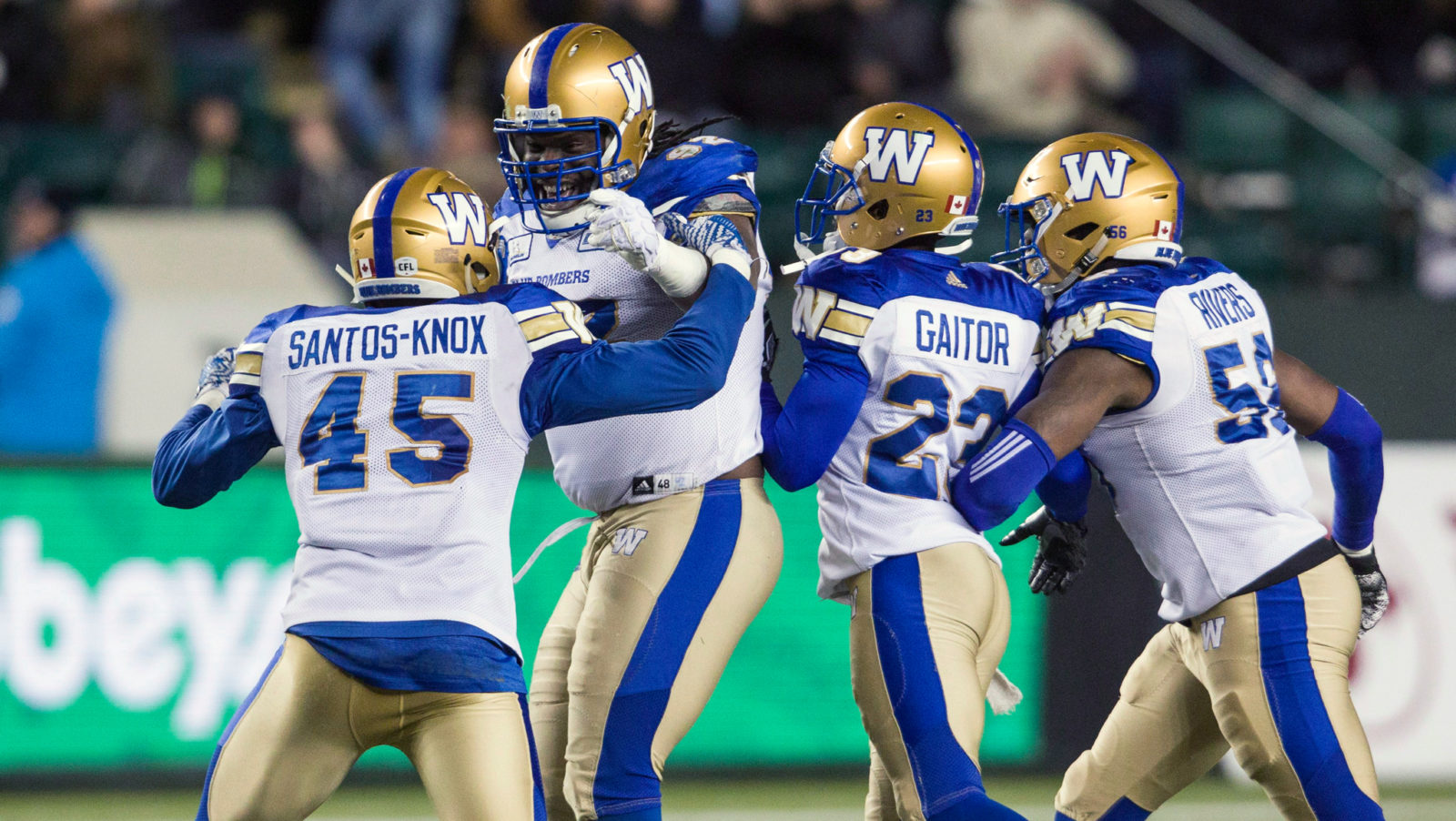 EDMONTON — There’s something about playing the Edmonton Eskimos that brings the best out of Kevin Fogg.

Nearly four months after scoring on a 110-yard missed field goal return in the season-opener, the Winnipeg Blue Bomber defender was at it again on Saturday night, forcing one fumble, recovering another and scoring on an interception to help the visitors defeat the Eskimos 30-3.

Fogg and the Bomber defence stifled Mike Reilly from start to finish, scoring 20 points off seven turnovers to silence a crowd of 28,788 at The Brick Field at Commonwealth Stadium in Edmonton.

Reilly was held to 164 yards on 17-of-31 passing and threw two interceptions, including the pick-six to Fogg in the third quarter that put the game out of reach for the Green and Gold.

The Eskimos’ pivot left the game in some discomfort with just over four minutes remaining in the fourth quarter after taking a sack, but was later spotted wearing his helmet and appeared to be alright.

Matt Nichols did what was needed, completing 16 of 20 for 169 yards and an interception in the win, while Andrew Harris rushed for a first-half touchdown and 73 yards on 20 carries.

With the win, the Bombers pulled into a third-place tie in the West with the Eskimos, the division rivals owning identical 7-7 records.

The two teams will meet again to close out the regular season on Nov. 3 in a rematch at Commonwealth, with the season series now knotted at one game apiece.

Rookie defensive back Marcus Sayles seemed like he was everywhere early in the game, setting the tone with a blocked punt on the opening possession to set up a Justin Medlock field goal, giving the Bombers the game’s first strike.

Sayles was at it again the next time on defence, delivering an echoing hit on Sam Giguere to force the Eskimos to punt for the second consecutive time out. The Bombers mustered a first down thanks to some pinpoint accuracy from Nichols on a 29-yard completion to Drew Wolitarsky, but all they could do was flip the field before having to punt.

Field position would become the theme of the first half, with the Eskimos’ second major miscue of the first quarter tilting the gridiron in Winnipeg’s favour. With Duke Williams looking to extend the drive on a second-down catch, Fogg forced him to fumble and sophomore Brandon Alexander recovered, setting the Bomber offence up near midfield.

However, the Bomber offence failed to take advantage, as a false start penalty and  Kwaku Boateng‘s ninth sack of the season led to a second-and-23, and eventually another punt by Medlock.

After the two offences combined for just five first downs and 104 yards of offence through 15 minutes,  the Bombers finally cashed in on their edge in field position early in the second quarter. It started with an illegal contact penalty, which extended the drive on second down before Harris moved the sticks again with back-to-back runs into Eskimos territory.

Following completions to Wolitarsky and rookie Daniel Petermann — making his first career start in place of the injured Nic Demski — Chris Streveler finished things off with a one-yard sneak from the one, scoring the game’s first major to put Winnipeg ahead 10-0.

The Eskimos’ third turnover of the first half would prove to be the costliest. After a two-and-out, Reilly was back on the field and looking to make something happen, but his pass on second-and-nine was intercepted by Bombers national safety Taylor Loffler and, after a pitch to Fogg, returned to the Edmonton 26.

Moments later, the workhorse running back Harris was on his way into the end zone for his first touchdown of the game, extending the Bombers’ lead to 17-0.

The Esks broke their goose egg with a late field goal from Sean Whyte, but trailed by two touchdowns going into the break. Nichols completed nine of his 11 passing attempts in the first half for the Bombers, but the big difference through 30 minutes was the three turnovers by the Eskimos.

It was more of the same for the Green and Gold early in the third quarter, when Reilly, driving the Eskimos into scoring position to try and pull within a touchdown, threw an errant pass that was intercepted by Fogg. The Bombers’ playmaking corner had his fourth pick of the season, and would take it back 71 yards for a touchdown the other way, extending Winnipeg’s lead to 24-3.

The Bomber defence wasn’t finished yet. Soon after, Alexander hit Reilly’s arm from behind while throwing, with the fumble falling into the hands of Fogg, marking the fifth turnover of the game for the Eskimos. Medlock added another three-pointer, extending the lead to 27-3, with 20 of those points coming off turnovers.

Medlock added his third field goal of the night for the Bombers, while Nichols was picked off by Eskimos defender Monshadrik Hunter in the fourth quarter.

Reilly left the game with 4:30 left and was replaced by Danny O’Brien after being sacked and getting up slowly. He was looked at by trainers but was later spotted standing with a helmet on alongside Kevin Glenn.

Turnovers were by far the biggest factor in the game, with the Bombers holding a 7-1 edge in the takeaway department. The Eskimos gave the football away three times each on fumbles and interceptions, and once on downs. That took the pressure off the Bomber offence, which needed just 239 net yards and 17 first downs to notch the W.

Wolitarsky led Bombers receivers with four catches for 51 yards, while Harris, in addition to his 73 yards on the ground, added 24 receiving yards on four receptions. With 1,051 yards on the season, Harris remains the league’s second-ranked rusher, still 90 yards back of league-leader and Ottawa REDBLACK William Powell.

Despite the one-sided score, running back C.J. Gable had 64 yards on 11 carries for the Eskimos. Their passing attack was led by Bryant Mitchell, who finished with a game-high 69 yards on six receptions.

Both teams hold a two-point edge over the fifth-place Lions, as the race for playoff positioning in the West continues to intensify. The top three teams are guaranteed a spot, but a fourth addition is almost a certainty via the East Division crossover.

The slumping Eskimos, who have lost back-to-back games and four of their last five, look to get back on track in a Thanksgiving clash with the Saskatchewan Roughriders on Oct. 8.

The Bombers seek a third straight win on Oct. 5 when they visit the nation’s capital to take on the REDBLACKS.