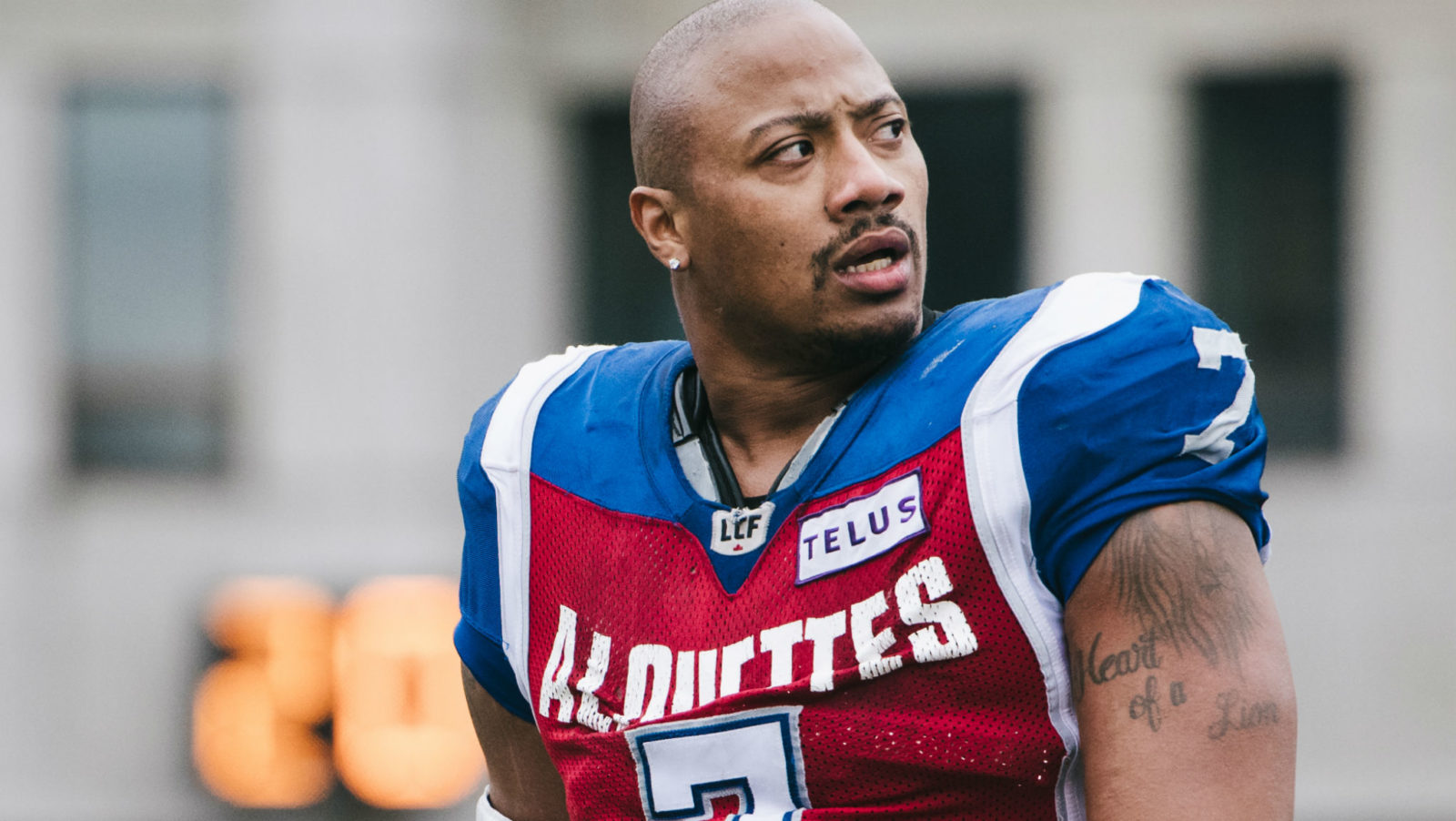 With his retirement imminent and with an old teammate seated next to him, John Bowman took a moment out of the final month of his career to look back.

It was an unseasonably warm day in Toronto on Wednesday, the temperature pushing past 30 C with the humidity. Sitting on a patio on the Esplanade, Bowman wore a straw fedora, brown-lensed glasses, a beige hoodie and jeans. All three of us have dressed for the date, not the forecast. Bowman doesn’t seem to mind as he goes back to his debut season in the CFL, where the Alouettes lost the 94th Grey Cup 25-14 to Dave Dickenson, Geroy Simon and a powerhouse Lions team.

» Bio: John Bowman
» Rewind: Bowman tears up as he reflects on CFL career 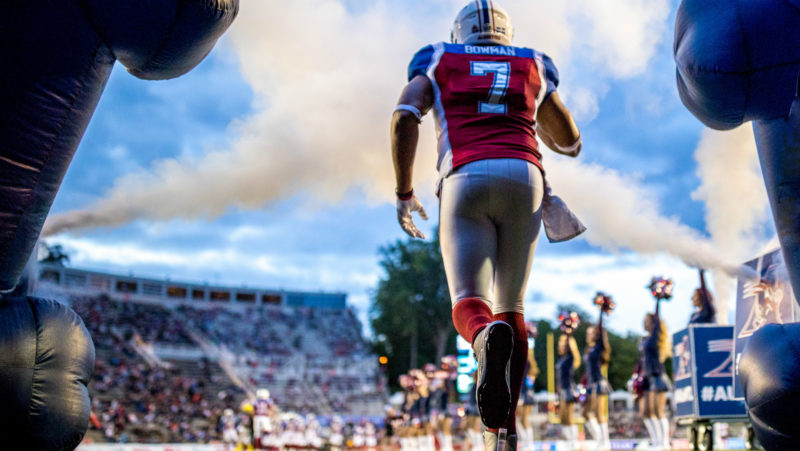 After a 13-year career, Montreal’s John Bowman is ’98 per cent’ sure that he’s ready to call it a career. (MontrealAlouettes.com)

Throughout Bowman’s recapping of events, Davis Sanchez is seated next to him, his eyes growing wider the more that he hears. By the time Bowman finishes his argument on the 2006 loss, Sanchez has leaned his head into his former teammates’ periphery.

“Are you kidding me?” Sanchez said.

“We should have won.”

Time has put a slight haze on the finer details of that day for both of them. They spend the next few minutes arguing about the deficit in the loss, which players were on each team and which players arrived on each roster later on in their careers.

“They dominated the sh– out of us. They were so much better than us,” Sanchez said.

“They had a good team, but we still should have won,” Bowman said.

Sanchez shakes his head in disbelief and calls on a higher power once more.

“We still had a chance to win that game,” Bowman said.

“So ’06 I felt like we could have won, 2008 for sure, I think we should have won that. In ’09 and ’10 we did win. We came close a couple other times. These last three years of being at the bottom of the league and not being in the playoffs, it kind of hurts a little bit.”

That doesn’t change his mind, though. Asked about his future, the 36-year-old doesn’t flinch.

“I tell everybody I’ll think about it, whatever, I’ll let everybody know in January but I’ve already told my coaches and everything like that. I’m 98 per cent done,” he said.

He figures that remaining two per cent will always be there, a shard of him that will wonder if things could be different with one more year. His heart will steer him to the game, but his head knows better. When he tore his bicep in early August, he was expected to be out for up to six weeks. He got back on the field two games later. Thirteen years, 124 sacks (and counting), and two Grey Cup wins later, Bowman knows that 2018 is his last dance and that there are only so many songs left to play. 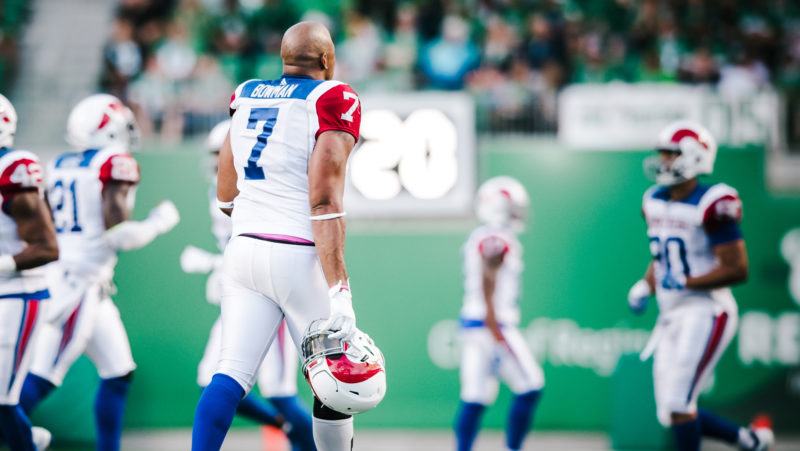 He admits that this isn’t the way he thought it would end.

“I always envisioned leaving at the top, being carried off like Rudy,” he said.

“I envisioned winning in the Grey Cup or having a good playoff run, pushing some team to the brink and then just hanging it up and walking off and not thinking twice about it. This is a sombre way to go.”

The Rudy ending will elude him and ultimately he’s OK with that. The CFL trade deadline ticked past Bowman on Wednesday afternoon without his phone ringing. He wasn’t sure how he’d feel about latching onto a new team for the last month of his last season anyway, not after the years he’s put in in Montreal. When he steps back and looks at all of it, there’s a feeling of completion. He goes back to that 2006 Alouettes team again.

“If you’d have asked my old teammates from my rookie year, they wouldn’t have thought I’d have the run I did,” he said.

“I asked my old DC Chris Jones when we played against Saskatchewan, ‘Could you ever imagine I would have become whatever I have?’ He was honest with me. He said, ‘I never thought it. I thought you’d be two, three, four years and that’s it.’

Bowman’s against-all-odds upbringing is well-documented. He was one of eight children in a one-bedroom apartment in Brooklyn, N.Y. that saw family members deal with drug addiction. He was surrounded by violence in the formative years of his life, before moving to North Carolina to live with his aunt.

He started playing football in the 10th grade and while he was an All-American at Div II Wingate, he didn’t know what his future held for him as he wrapped up a business admin degree that focused on marketing.

“My senior year, I remember my stats. I had 70 tackles, 17 sacks, 33 tackles for a loss. Sixty solo tackles and I go to this all-star game. This guy is reading my stats off, I think it was a guy from the Eagles and he was impressed. And then I stand up,” Bowman said, letting out a big laugh.

“There was this look of disappointment and disgust. He knew he was going to find a gem at this Div II all-star game, no one’s ever heard of me, I’ve got the guy.

“We went out and played I had a couple of sacks in that game, whatever. I thought I’d never play football again.”

Bowman was convinced by some friends to join the National Indoor Football League in 2005. He played two seasons, collected some but not all of the cheques he was due (“I’ve got probably $65 in my bank account and these cheques are bouncing all over the globe,” he said) and when then-Als GM Jim Popp went to scout Bowman’s teammate, Marcus Brady, he was intrigued with both of them.

The rest is hall-of-fame-bound history. The playoffs aren’t in the picture but he’ll enjoy these final few games and like he has all year, will make sure to take in the small things. He doesn’t encourage hecklers, but he’s come to appreciate the smart, enthusiastic fans across the country.

“If somebody knows football, fine, you can talk as much sh– as you like. When we were in Winnipeg, this guy was like, ‘Bowman, it’s time to retire. You’re slowly declining. Your stats are going down.’ I’ll take that kind of ribbing. That’s fine.”

He’s not sure what’s next for him. He knows the game well enough to coach it but says he doesn’t have the temperament for that profession. He’d like to see his future in Montreal. A return to the States is possible, “but it all depends on the government,” he said, laughing.

“I tell everybody, I’ve been to Miami, Colombia, Costa Rica, L.A., Montreal, from mid-May until like mid, end of September is the best city I’ve ever been to. I want to stay in Montreal.”

He won’t get the Rudy ending but there’s some pleasant finality in this season. His first game in the CFL was in Hamilton. The Als wrap up the season at Tim Horton’s Field on Nov. 3 and Bowman is currently eighth all-time in sacks, two behind Stewart Hill. The scout at that college all-star game was right; he just didn’t know it. He’d found a gem in John Bowman. All he needed was a chance.