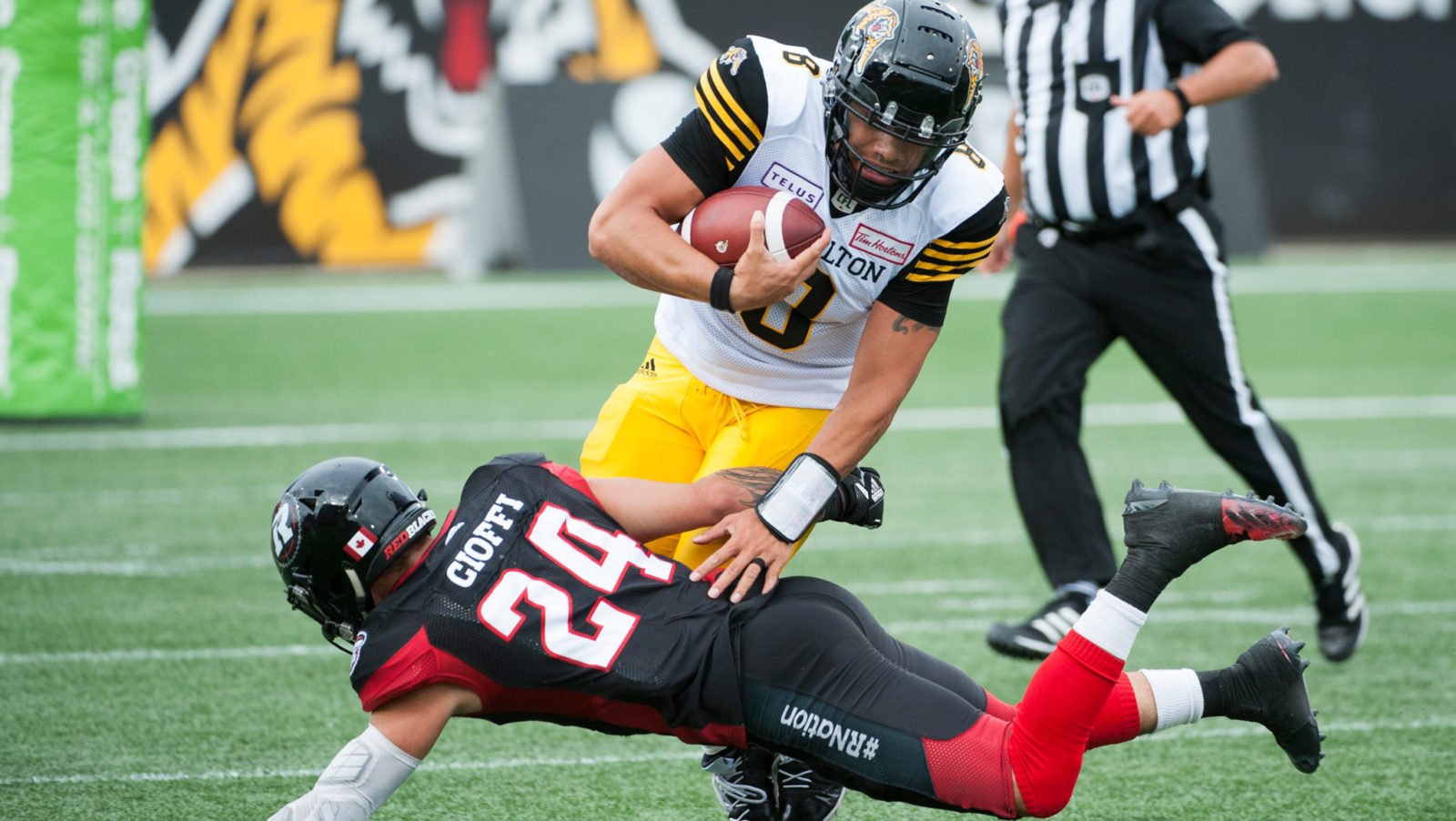 There is a focal point for the Ottawa REDBLACKS, as they attempt to regain their edge in the East, with two gargantuan games against the Hamilton Ticats coming this week and next.

They could look behind them and feel sour about losses that, had they been the victories they’d counted on, would have them feeling much more comfortable ahead of this showdown. They could bemoan their inconsistent play throughout 2018. Or, they could look ahead.

RELATED:
» Buy Tickets: Hamilton at Ottawa
» Ferguson: Which late-season acquisition will make an impact?
» MOP Watch: Has Masoli taken the next step?

Ahead, they find their focal point; Hamilton quarterback Jeremiah Masoli.

These days, keeping Masoli at bay is difficult. He ripped the Argos last weekend with four touchdown passes, totaling 338 yards through the air. His quarterback rating (101.8) ranks first in the CFL and with a game in hand over Edmonton’s Mike Reilly, he trails last years Most Outstanding Player by 350 yards for the passing lead.

To blunt Masoli’s efforts successfully, to “get in his face,” as Klassen says, is a task of not only physical challenges but of mental ones as well. Attention to the little things, like approach angles and the minutiae of tackling technique, also loom large.

Of all the things that need to go right for Ottawa during this showdown, mitigating the type of damage that the Ticats’ red-hot quarterback has administered to others of late, is top of the list. That’s where Klassen and the rest of the Ottawa defensive linemen come in.

You can talk all you want about what the REDBLACKS’ secondary needs to do or about what their offence must accomplish. Important, yes. But it won’t mean all that much if Jeremiah Masoli is allowed time and space to continue defining his rise to possible MOP status.

“He is a playmaker and it’s definitely something we have to do is keep him in the pocket,” says Klassen, “make him step up, make him make errant throws and hopefully the game will be ours.”

Masoli can poison you in a couple of ways; one, by getting outside and threatening to lug it himself. Or, by standing in the pocket if he has inordinate amounts of time to survey the field and then survey it again. Given too much time, guys like Luke Tasker and Brandon Banks are going to get open. They just are.

“Watching film this week,” Klassen explains with incredulity in his voice, “there’s times where he’s holding on to the ball for four, like or five seconds. That’s when he’s making those big plays. If you can’t get to him in four or five seconds, you’re just not gettin’ it done.”

“We’ve gotta wrap up and make sure we get him to the ground so he can’t escape and make those plays that he’s known for making.”

Michael Klassen on the challenge of facing Jeremiah Masoli 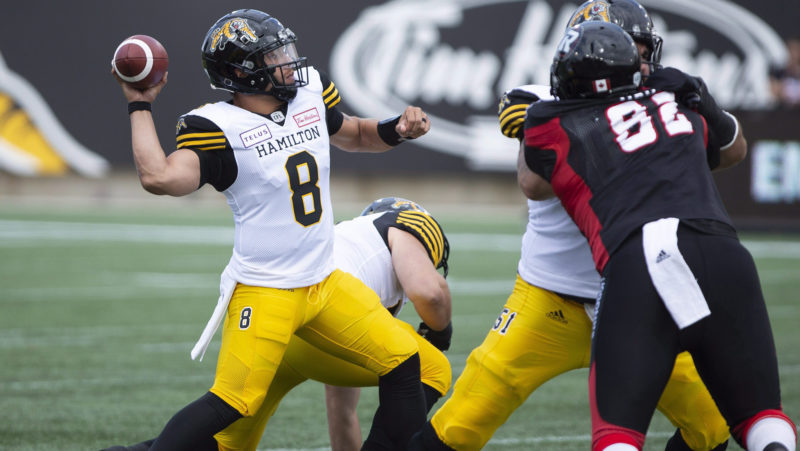 The REDBLACKS will try to keep the elusive Jeremiah Masoli in the pocket this weekend (Adam Gagnon/CFL.ca)

Of course, Masoli has shown a propensity for using his escape hatch in constructive fashion when defensive linemen ARE getting it done. In that, he seems to have not only the physical tools to avoid being taken down but also an innate sense of just where to go when the alarms are going off. It seems so often that Masoli’s first escape decision is the correct one.

“He’s not only an amazing athlete but he knows when to step up and take a shot and maybe escape up the B gap,” says Klassen, the 27-year-old Calgary native in his first year with the REDBLACKS. “Or he might see
that defensive end coming underneath the block and he’ll be able to escape outside.”

“We watch film all week and constantly we’re seeing guys on different teams – the defensive ends – taking the bait, coming (inside) and sure enough, here comes Masoli outside. And he’ll make one of those big throws that he’s known for making and there you go. First down.”

Keeping Masoli from bouncing outside takes discipline and attention to all the angles, says Klassen. That is only part of the chore, however. Because if you do keep him inside, and then you do get to him, there’s the question of ensuring he doesn’t squirm away, something that he can do when a would-be-tackler takes the situation a bit too lightly.

“He’s got a very strong base on him,” says Klassen. “He is a shorter guy so, naturally, he’s gonna be a little more stout.”

The Ottawa defence managed to sack Masoli five times during last July’s 21-15 win over the Ticats in Hamilton, including consecutive takedowns to end the game, with the ‘Cats deep in Ottawa territory.

On that day, Masoli threw for 352 yards and a touchdown, but also coughed up an interception and found himself stymied time and again when he’d marshalled the Ticats into striking distance. He moved the Ticats up and down the field but failed to really take advantage of the situation with major scores.

That was a neat trick that Ottawa pulled that day, using seven Lewis Ward field goals to get the win. Safe to assume they’d take that again on Friday night, even if it is not their preferred storyline, one where they dominate on both sides of the ball.

The REDBLACKS’ defence, though, would be alright with bottling things up just enough and forcing Masoli to be something that he hasn’t been that often this season and that is uncomfortable. Klassen believes they have the personnel to do the job. Along with end A.C. Leonard, Klassen forms a solid veteran base for a sack defence that has a total of 31 to its credit in 2018 (6th in the CFL).

“We’ve been gettin’ after it, but not as much as we’d like to,” says Klassen, hoping for a top-shelf performance at just the right time.

“I feel like we’ve got something to prove this week.”

The entirety of the Ottawa team likely feels that way. It is imperative, however, that Klassen and his pocket-crashing mates be the ones who offer the most proof, as they try to put the wraps on a quarterback who has been most unwrappable of late.