The Grey Cup will air nationwide on November 25th beginning at 6 p.m. ET on TSN and RDS. Kissel joins previously-announced artists at the biggest annual sporting event in Canada, including Grammy award winning Alessia Cara who will showcase the Freedom Mobile Grey Cup Halftime Show and Canadian country duo The Reklaws who will headline the Sirius XM Kickoff Show. 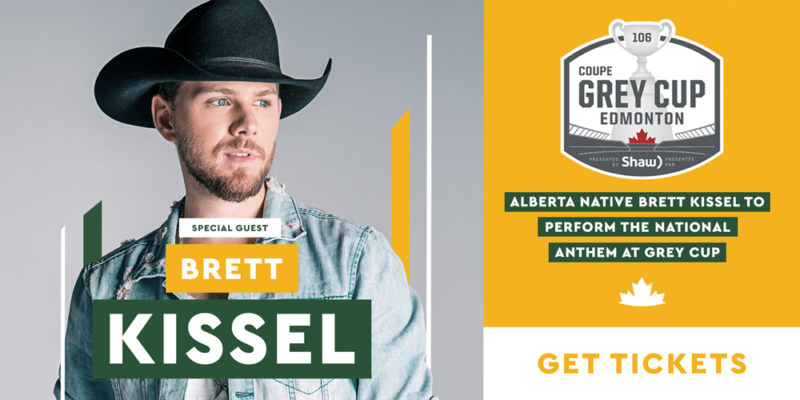 “It’s an honour to be chosen to sing our national anthem at this coveted national event,” said Brett Kissel. “I’ve been a CFL fan my whole life and I will certainly cherish the experience.”

Kissel, a Flat Lake, Alberta native has been a force on the Canadian country music scene. Kissel took home ‘Breakthrough Artist of the Year’ at the 2014 JUNO Awards and has taken home the coveted Canadian Country Music Awards (CCMA) ‘Male Artist of the Year’ in back-to-back years as well as the ‘Fans’ Choice Award’.

His success has seen him become the first Canadian ever to tour with country superstar Garth Brooks. Kissel is in the midst of completing his ‘We Were That Song Tour’, one of the most extensive tours in Canadian history, which will see him performing more than 100+ dates covering every province and territory in Canada.

The 106th Grey Cup will be played at The Brick Field at Commonwealth Stadium on November 25th, 2018 – the fifth CFL championship game held in Edmonton. The game is set to kick off at 6 p.m. ET live on TSN and RDS. Limited tickets are available for the 106th Grey Cup; to purchase tickets click here.

The 2018 Grey Cup Festival presented by Shaw will take place in the heart of downtown Edmonton – Jasper Avenue from 99th Street to 96th Street – from November 21-25. Kicking off on the evening of Wednesday, November 21, the four-day Festival will feature free programming for the entire family to enjoy in the week leading up to the 106th Grey Cup Presented by Shaw. Fans can visit http://www.greycupfestival.ca for a full schedule of events listing.