In football terms, Marv Levy has seen it all and seemingly done it all. He is the only head coach in history to appear in four consecutive Super Bowls, was named to the NFL 1990s all-decade team and sits seventh on the all-time pro football wins list when you combine his totals in the CFL, NFL and USFL.

After serving on the Washington Redskins coaching staff when they reached Super Bowl VII against the Miami Dolphins in 1972, Levy was named head coach of the Montreal Alouettes; a team that featured a young linebacker/punter named Wally Buono. As Buono prepares for the final regular season game of his brilliant career, bclions.com chatted with Levy, now 93 years old but still sharp as a tack, for some of his best memories of working with who would become the CFL’s most decorated head coach. Perhaps not surprisingly, Buono wound up massively exceeding Levy’s initial expectations.

“I studied the roster quickly and learned he was not a very big guy that played linebacker,” recalled Levy from his home in Chicago last week.

“But I soon found out that nothing was going to keep him from doing it. I got to know him quickly because of his high work ethic, great character, his team-orientation and what he did on game day. So all of those contributed to the respect that I began to develop for him and over the years has continued to grow.”

The pair won two Grey Cups together, the first in 1974 at rainy Empire Stadium against the Edmonton Eskimos. But perhaps the most famous victory they achieved together came three years later, Marv’s last season up north when they took down the Eskimos once more, this time at home in the frigid confines of Olympic Stadium. Buono’s teammate, the late Tony Proudfoot was given credit for the idea of Alouettes players putting staples in their cleats to easier navigate the treacherous turf conditions. Levy remembers just how much Buono and the rest of his players were willing to win at all costs.

“Do I ever? It was bitter cold, but we used to have a mantra ‘if it was too tough for them, it’s just right for us,’” explained Levy.

“That was a mantra from World War I. My father was a member of the Marine Corps and in the Battle of Belleau Wood, his commander had said once they had stopped the German Army advance on Paris now the Marines had to attack back across those fields. I may have applied that term in that game and on that day, thinking it was appropriate.”

And it paid off in what would be perhaps their most rewarding victory together before Levy found his way back to the NFL and Buono would enter the later stages of his playing career before the transition to coaching.

“I just know they all played pretty darn well that day. Our defence was outstanding,” said Levy of the Grey Cup performance.

“It sounds like our offence ran away with it, 41-6 I think was the score. I can’t tell you how many tackles he (Wally) had or if he had an interception or a sack, I just know he was an integral part of a championship performance and of some championship individuals on that team. I’m sure he still remembers well many of his teammates. I sure do.”

Although Levy will admit he could have never predicted the huge success Buono would have as a GM and head coach, he insists he saw many of those important attributed in Buono during their five seasons together with the Alouettes.

“His persistence, his resoluteness, his study of what our schemes were and wanting to apply them, explained Levy.

“When things went wrong he didn’t give up or throw in the towel. He went back to work. He reflected so many qualities that applied to not only coaching but other fields as well. Did I think he could go on to be a good coach? Absolutely. But the type of career he ended up having? No one could predict that. It’s an amazing career. I’m so proud of him and proud to be able to say I coached Wally Buono for the majority of his career in the CFL.” 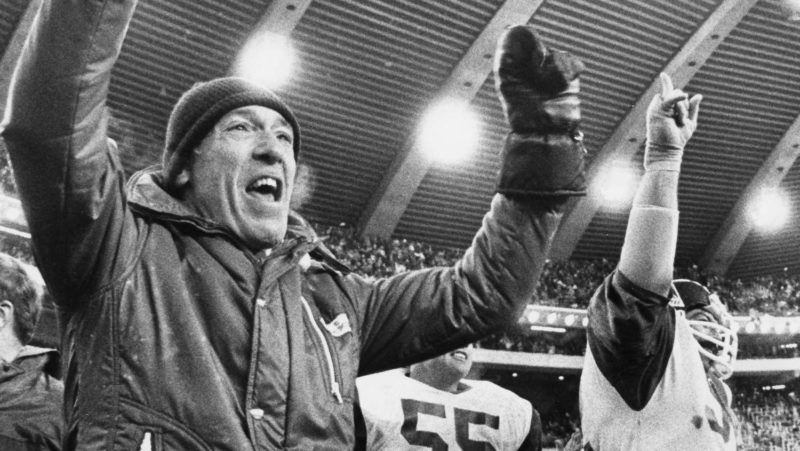 Levy, of course, would never get the Buffalo Bills a Super Bowl win despite knocking on the door those four years in the early 90s. Yet when he looks back at his time with Buono in Montreal, the memories, relationships and Grey Cup championships are still just as rewarding after all of these years.

“It sounded intriguing and there was a lot for me to learn, certainly different rules and different schemes, but the same thing still won: whether it was the Canadian league or American style of football, if you run, throw, block, tackle, catch and kick better than your opponent then you’re going to win,” explained the coaching legend.

And you know he will be following the rest of Buono’s farewell season, however long it may be, like a proud father figure.

“Certainly in 47 years of coaching, there were thousands of young men that I coached. He remains so prominent in my mind. I’m so proud of him and so proud to be able to say I coached Wally Buono myself in the CFL. I did see him at a 40-year Grey Cup reunion years back in Montreal and we exchanged pleasantries, of course. I coached lots of players. He certainly is right up there among the most prominent.”

Pretty remarkable praise for a man who has pretty much seen it all.