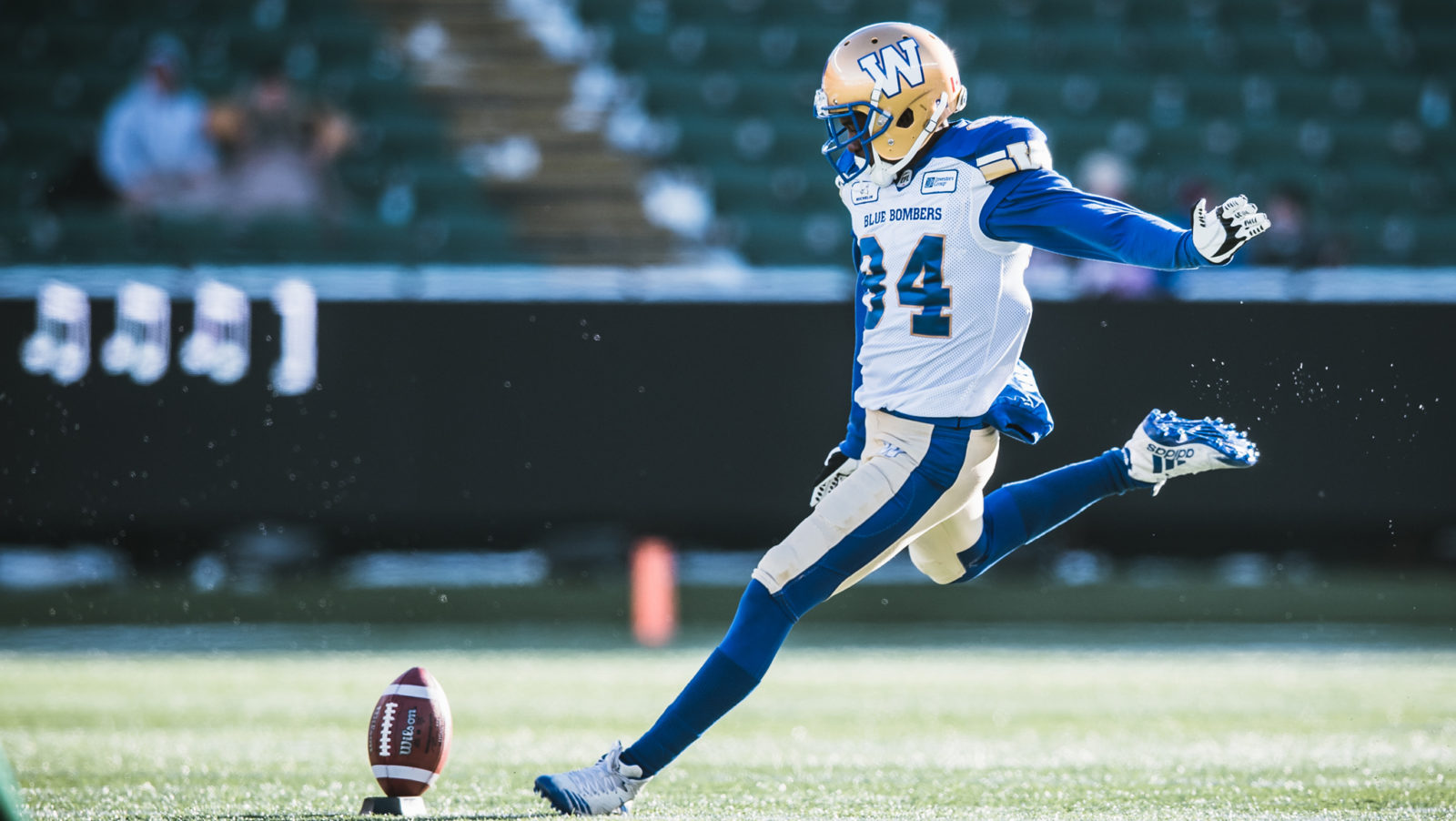 Hello, Jon Gott. I can’t add too much in the way of praise when it comes to what most everyone agrees was the most epic touchdown celebration we’ve ever seen. You are my spirit animal. If you make it to Grey Cup I fully expect all your media avails to be open bar. I’ll bring nachos.

Three losses in a row had things looking a tad bleak for the Calgary Stampeders, heading into their regular season finale in B.C.

Far from the unsympathetic killing machine they’d been over the first half of the season, those losses had the early season Grey Cup faves looking like a fading pony down the stretch, the rest of the field gaining on ’em, lickety-split.

Saturday night’s dominant win over the Lions has it appearing that the Stamps have avoided a continuance of their wobbly ways, and now they get two weeks to heal up and get into a groove in practice, happily watching as the Winnipeg Blue Bombers and Saskatchewan Roughriders tear chunks off each other in the Western Semi-Final.

Rolling to a first half lead of 25-nothing, the Stampeders had most all of the hallmarks of their summertime dominance in effect; An on-target Bo Levi Mitchell, some awe-inspiring receivers’ play (hello, Chris Matthews) an undeniable ground game and a snarling defensive unit, complete with the usual filling in of a running back by Micah Johnson.

Even with more than 2,000 yards in receivers on the injured list, the Stampeders looked formidable on Saturday night, showing that their crisis management strategies have borne fruit.

2. THE TICATS CAN USE JOHN WHITE’S POWERS FOR GOOD 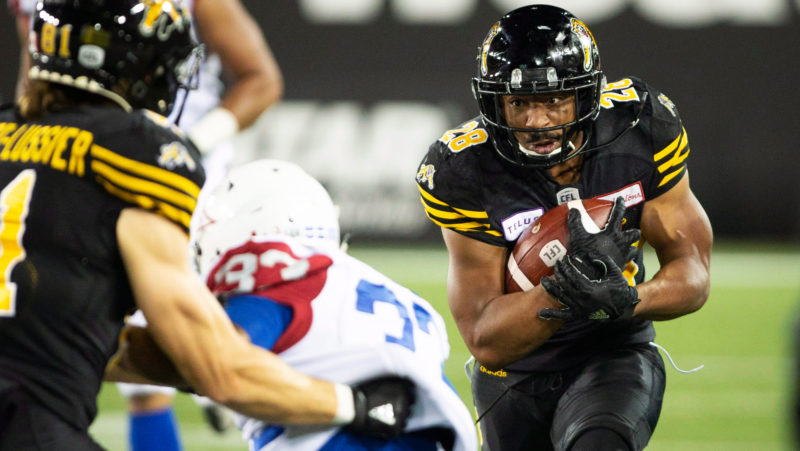 That was some kind of burr under John White’s saddle on Saturday night, in Hamilton.

The Ticats’ back-up running back had just nine carries in the Cats’ 30-28 loss to Montreal, but he piled up 88 yards on those carries, many of those yards earned with, shall we say, extreme prejudice. Included was a 36-yard rip that he followed with a mighty bellow that surely had port authority officials at nearby Hamilton Harbour scrambling to see what unscheduled ship was coming in.

With the Ticats needing to overcome all those injuries in their receiving corps, people have been wondering who might pull the slack in order to power the offence.

Alex Green is Hamilton’s starter at the position, but if the team could find a way to get White in the backfield for some touches as well, they could definitely be the beneficiary of the pent-up, explosive energy White’s appetite has been brewing.

3. THE ARGOS ARE IN FOR A MAJOR RENOVATION JOB

We already know the team agrees with that assessment, firing Head Coach Marc Trestman just hours after Friday night’s loss in Ottawa. Whatever you want to say about tying the can to a man who led your team to a championship just one year previous, Toronto’s unspirited season finale loss to a REDBLACKS team that was manned by a significant number of second and third stringers at significant positions surely depicted a team that is in need of overhaul.

In a shocking campaign that saw the Boatmen fall from top of the heap to last place – and in doing so accrue the worst winning percentage for a defending champ ever – the signs became more and more apparent that big changes were going to be needed moving forward.

In relieving Trestman of his duties, a whole can of off-season intrigue has been opened, as the Argos become players in the coaching free agency department.

That will just be the beginning, though.

BONUS TAKEAWAY: The Edmonton Eskimos might well be not far behind the Argos when it comes to change. Stay tuned.

4. THE CATCH OF THE YEAR NEVER HAPPENED

With due respect to all of the grand receivers who made jaw-dropping receptions in 2018, the one that would’ve topped the charts happened on Friday night at TD Place, even though it didn’t.

Ottawa’s Seth Coate made a ridiculous grab during the third quarter of Ottawa’s win over Toronto. While on his back and reaching back, he got a chunk of a downfield ball heaved by REDBLACKS’ quarterback Danny Collins. The ball rolled up his arm and helmet and landed on his chest, in a bit of majesty that married Cirque du Soleil and the Harlem Globetrotters. Now, it sure looked impossible that it had been completed at first glance, happening so close to the turf as it did and in such quick fashion.

Slo-mo revealed, though, that the ball never kissed the turf – not to my eyes, anyway – and that Coate made the most circussy of circus catches of the 2018 campaign.

Since it was ruled incomplete, everybody wave your hand in front of your face and, in your best Obi-Wan Kenobi voice, repeat after me: This is not the completion you’re looking for.

5. DON’T TELL THE DUKE IT’S A NOTHING GAME

Big D’haquille Williams came into Edmonton’s final game knowing a couple of things. One, that his Esks were missing the playoffs no matter the outcome. And, two, that he was going to win the CFL’s receiving title even if he got bageled on the stats sheet.

Add to those little specks of knowledge that Duke Williams’ reputation had already been well-earned, as well-documented on video over the last two seasons. He had nothing to prove in this game.

Nevertheless, on a frigid Edmonton afternoon, and with a field that had been hardened by a November snowfall underneath him, Duke Williams kept on being Duke Williams.

On an early first quarter throw from QB Mike Reilly – well overthrown, too – Williams dove, stretched out and actually got his fingertips on the thing as he crashed to the turf. Almost pulled it off. Later, in the same quarter, he dove again, flying flat-out to haul in a touchdown pass in the back of the end zone, providing us with one of the catches of the year.

No such thing as a nothing game to the Duke.

AND FINALLY… Winnipeg receiver Ryan Lankford was impressive on Saturday, as a punter and kicker. Chipped a 28-yard field goal attempt straight through, was a perfect three for three on converts, held down a 44.3 yard average in punting and averaged 64.3 yards on kick offs. Yeah, sure, all of that was impressive, I guess. However, what impressed me most was that he actually remembered to go back and pick up the kicking tee after racing downfield to cover one of his kicks.