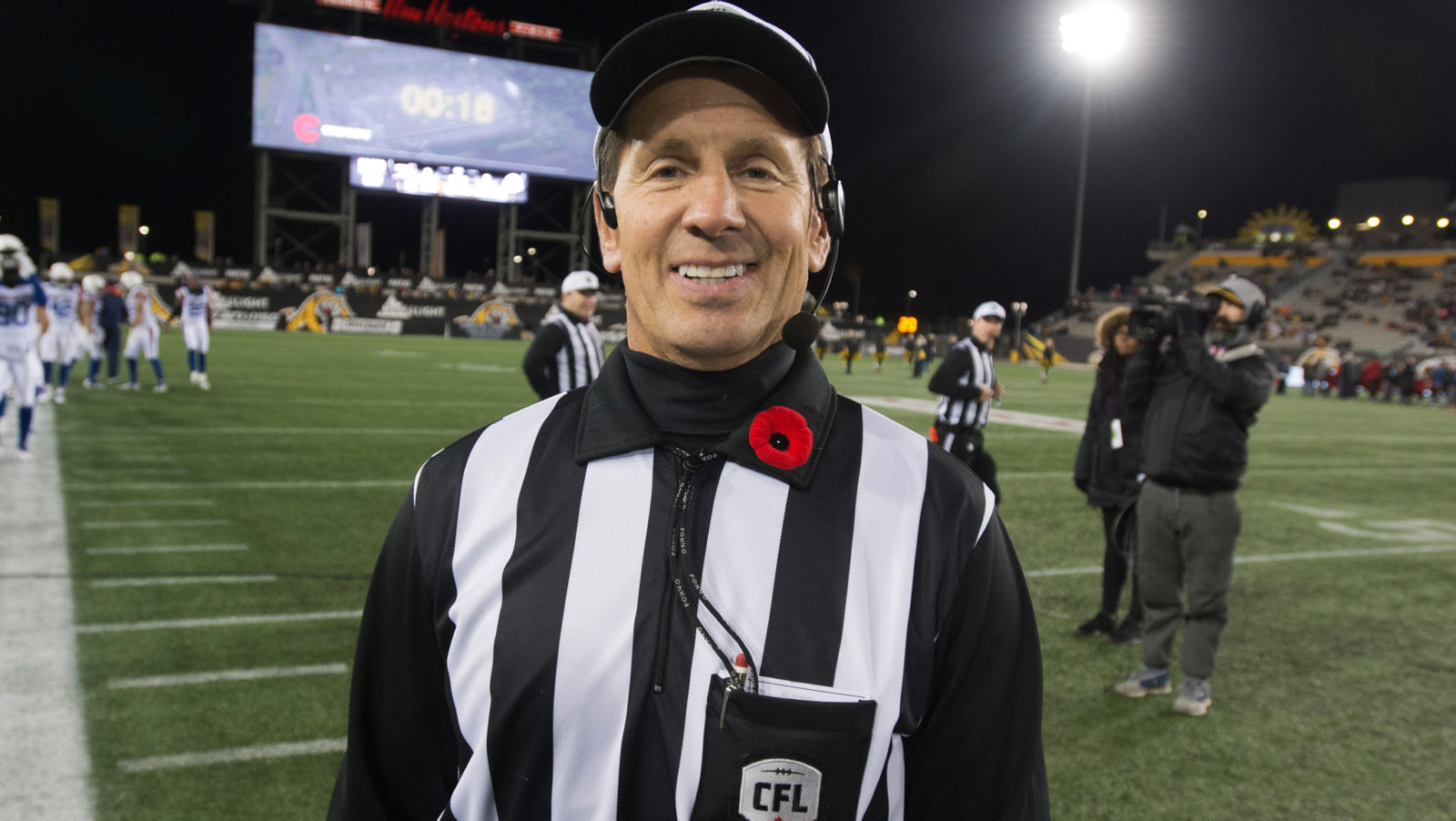 Murray Clarke has heard about it all year from his crew. With each passing week this season, the 27-year CFL referee inched closer to working his 500th game. He hit the mark on Saturday in Hamilton.

“Like anything else, I’m sure it’s one of those things when it’s all said and done I’ll look back and and it’ll seem a little more important,” Clarke said in the days leading up to the game from his home in Victoria, B.C.

Clarke’s been aware of his milestone too, but his focus has been on each game that he and his crew are assigned. It’s been this way for an entire career spent jogging up and down CFL fields.

“When you’re out on the field it’s like you’re alone out there with 24 other players and six other officials,” he said.

He’s proud of his feat but at 57, he says he’s still got a lot left in the tank. He hasn’t tired yet of the red eye flights from out east after a game and quietly traipsing in the front door at 1 or 2 a.m., then getting back on a plane in a few days to do it all again.

“I’ve always wanted to work at least 30 years and get 10 Grey Cups under my belt. That’s always a goal at the start and you never know where you’re going to end up,” he said. 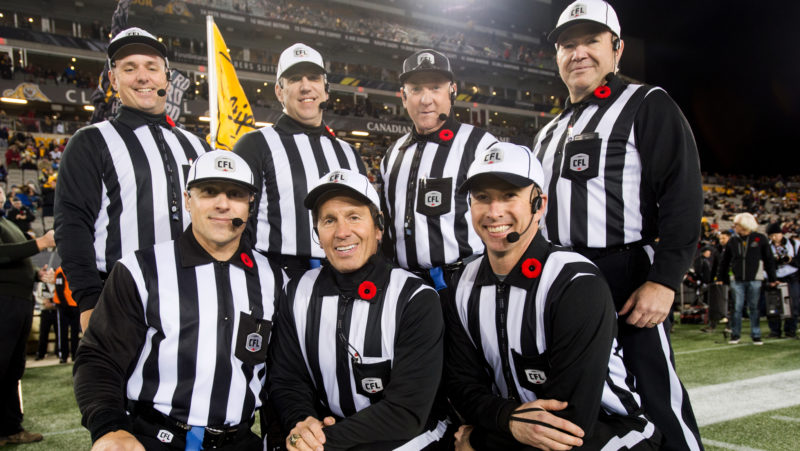 Clarke (middle) poses with the rest of the officials crew during his 500th game in Hamilton (Adam Gagnon/CFL.ca)

Clarke’s getting there. He’s worked nine Grey Cups and can say he’s been in some of the most memorable ones the league has seen. He worked the 2005 double overtime game between Montreal and Edmonton in Vancouver. There was the 2009 game in Calgary, where Saskatchewan’s 13th man penalty cost them a championship. He worked the 100th Grey Cup in Toronto in 2012 and he’s been on the field for two of the snowiest games, in Hamilton in 1996 and in Ottawa last year.

“The main thing about the CFL is you think you’ve seen it all in 27 years and you still see something new,” he said.

If it seems unlikely that a guy that grew up in Victoria would become a CFL official, Clarke doesn’t disagree.

“I confess that I would always get at the refs if I thought they were making mistakes. I always thought it was an important job to do and I tried it out. I’ve been officiating since I was 14. I enjoy it, I seem to have a knack for it and it’s just a different aspect of the game.”

He got serious about officiating in his 20s and started working junior football games.

“I had a tough time getting into any university games because the Vancouver guys were very possessive about the UBC and Simon Fraser games,” he said. “They weren’t very thrilled about giving a spot to somebody from the island so it took quite a while.

“When I finally did get a chance, it was when the CFL started paying Canada West for the travel of some officials so they could get a look at them. I worked one year of college ball and the next year I was in the CFL.”

His first taste of working as a CFL ref was a unique one. It came in Portland, Oregon, in a preseason game in 1992. As Clarke puts it, the league was “dipping its toes” into U.S. expansion at that point. He said Portland fans loved what they saw.

“They packed the place, it was a great atmosphere,” he said. “I’m surprised they didn’t look at them seriously for a franchise. With the close proximity to Vancouver and all of that, I expected to see more teams closer to the border, rather than the deep south.

“Having said that it was quite an experience to get to go and work games in San Antonio and Memphis and Baltimore, it was a real eye opener. They take their football real serious down there. Even though it was CFL football, the fans were so invested in the game. No matter what you called you were wrong. They just had to support their team. There was no logic in any of it at all. They didn’t care, they were just going to give you the gears because that’s how they supported their team.”

While refs might do their best to tune out the noise around them, there’s an ongoing conversation with the coaches. Those relationships and understandings grow as both sides careers progress.

“Don Matthews was always brilliant,” Clarke said. “He was so smart. He understood everything in the rule book and he would come up with ways around it and (try to find) loopholes.

“We were aware of all the loopholes that were just waiting for someone to exploit. And we would always say, ‘Matthews is going to show up one day and do that,’ and sure enough the stuff he would come up with, he was brilliant.” 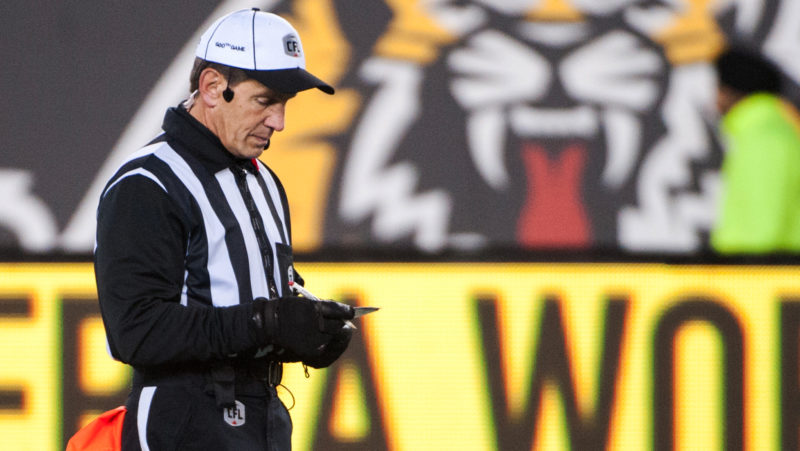 Clarke sees coaches in today’s league, from veterans like the departing Wally Buono to younger head coaches like Winnipeg’s Mike O’Shea and admires the intelligence they bring to their game plans each week.

“(O’Shea has) always got something up his sleeve and Wally Buono, he’s more like a college coach, where he’s the father figure and he’s in charge of everything,” Clarke said. “Even back in Calgary, he ran it like a college program. He was in charge and it wasn’t like how it is today where the players are a lot more liberal and you have a lot more freedom. Back then he ran a tight ship and obviously was very successful at it.”

Clarke had some rare company with him for the game in Hamilton. He brought his wife, Shannon, who usually only accompanies him to a Grey Cup. His sons, Kyle and Connor, watched on TV.

“My wife’s been so supportive,” Clarke said. “She’s the reason I can do it. She encourages me because she thinks it’s great what I do and it could just as easily be the other way where everything’s busy at home and you’re not around. She’s super supportive. Same with my kids. I’ve coached them all the way through and now they’ve both graduated high school.”

If he pushes it to a 30-year career with the CFL, Clarke should be up over the 550 games-worked mark. He keeps his focus on each week, tries to be his best and enjoys the camaraderie with his crew.