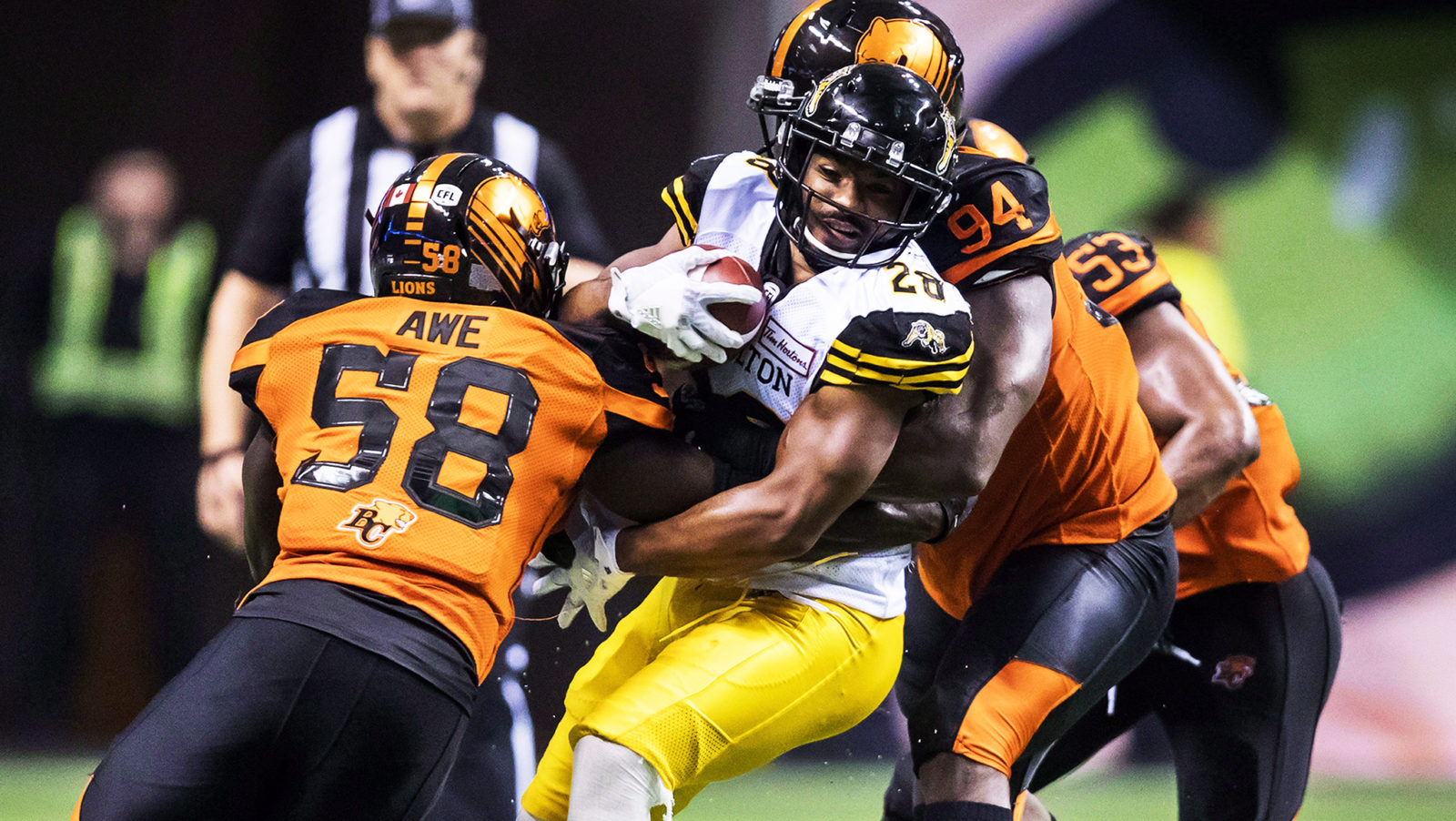 With a degree in petroleum engineering from Texas Tech, Micah Awe is considered a pretty bright guy. Maybe that’s why the hard-hitting BC Lions’ linebacker appreciates the brilliance of the Hamilton Tiger-Cats’ running game.

“It’s very simple, but they know all the nuances of it,” said Awe, sweat streaming down his face after practice despite the chilly weather. “They pull the guard, they pull the tackle. They are not doing something that is made up or some brand new scheme. They just do it very well.

“The running backs, all the way up to the quarterback, everybody understands what they are trying to do on the play.”

» Head-to-Head: Who has the edge in the Eastern Semi?
» Numbers Don’t Lie: Three trends that could loom large in ESF
» Setting the Narrative: 12 storylines for the Grey Cup Playoffs 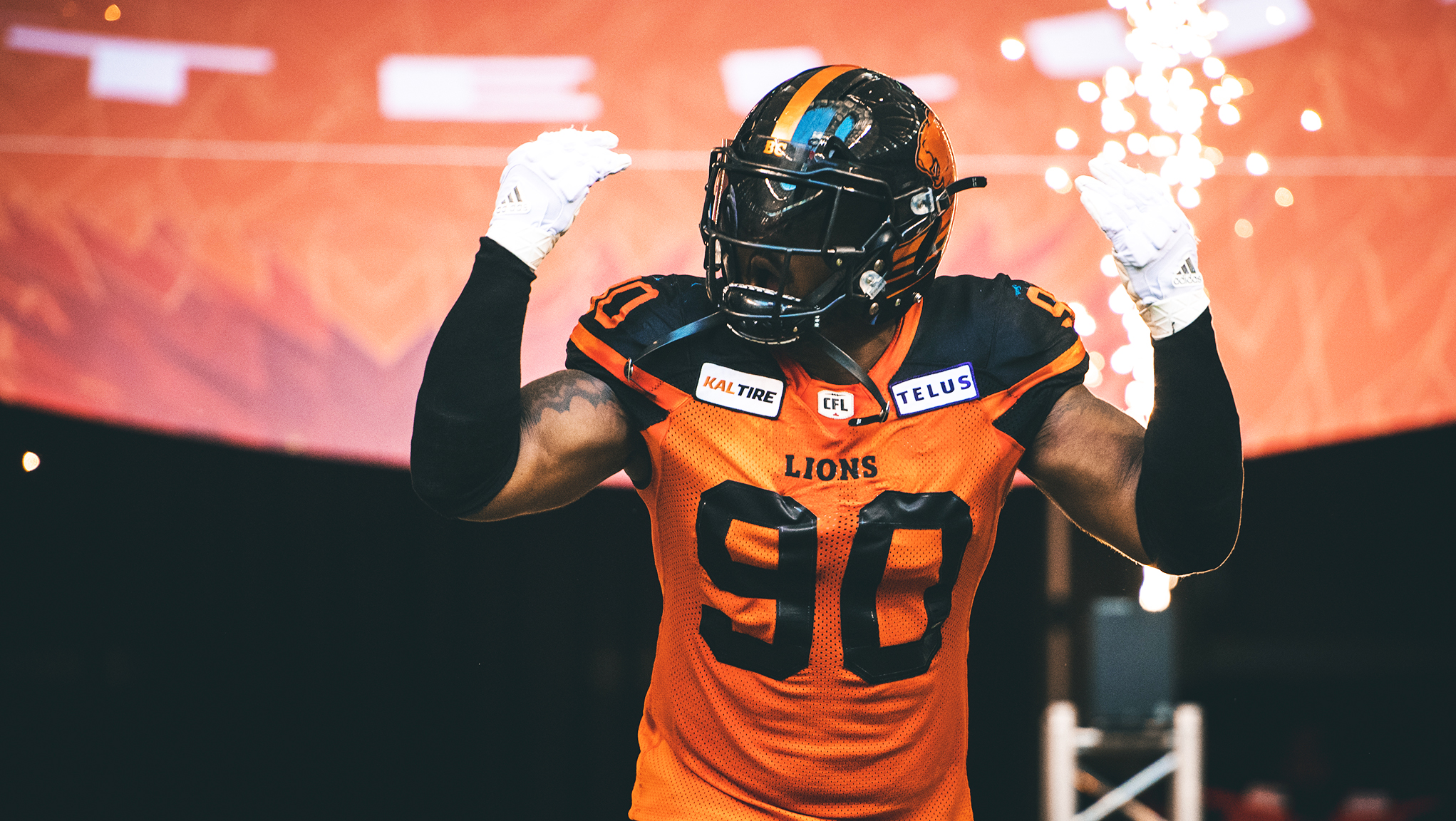 BC Lions defensive tackle Davon Coleman will lead the charge on trying to stop a Tiger-Cats rushing attack that has been productive of late and relied on heavily since the injury to Brandon Banks (BCLions.com).

Containing that running game will be one of the keys if the Lions hope to keep their Grey Cup dream alive with a playoff cross-over win against the Tiger-Cats in Sunday’s Eastern Semi-Final at Tim Hortons Field.

Defensive tackle Davon Coleman said it doesn’t take a genius to devise a winning formula to trip up the Hamilton ground attack.

“Physicality,” said Coleman, BC’s nominee for most outstanding defensive player, “The coach is going to put us in the right positions to take care of anything they shot at us.

“Just be physical and stand in the system and play our style of football. I think we’ll match up well.”

The Tiger-Cats (8-10) led the CFL with 7,300 yards of net offence this season, averaging over 405 yards a game. Hamilton averaged 110.6 rushing yards each game, third best in the league.

The Lions, who finished fourth in the West with a 9-9 record, allowed an average of almost 114 rushing yards a game, seventh most in the league. In the final two games, losses to Calgary and Saskatchewan, BC gave up 344 yards and a touchdown along the ground.

“The last two weeks . . . it’s either been feast or famine,” said retiring Lions’ head coach Wally Buono. “On defence, either we are stopping the running back at the point of attack or (the play goes) 12 or 15 yards.

“That’s something we can fix, and we’ve got to fix. The Hamilton team has a good running game and a good short passing game.”

The Lions defence could receive a boost with the return of middle linebacker Solomon Elimimian, who has been sidelined since July following wrist surgery. Elimimian practiced with the team Tuesday and a decision will be made on his playing status prior to Sunday.

“He is very close to playing,” said Buono.

Hamilton has used both Alex Green and John White at running back this year. In eight games, the six-foot, 228-pound Green has 604 yards and seven touchdowns along the ground. In seven games the five-foot-eight, 195-pound White has 400 yards and two touchdowns.

“Both of them are very similar backs,” said Lemon. “Green is just a little bigger than White, but White plays like he’s the same size as Green.

Quarterback Jeremiah Masoli adds another dimension to the Tiger-Cat run attack. Masoli threw for over 5,200 yards and 28 touchdowns this season. He also was Hamilton’s second-leading rusher with 473 yards and two touchdowns on 63 carries.

“He’s a load,” said Lemon. “He’s a short, compact guy that can make all the throws on the field.”

In a league where Edmonton’s Mike Reilly and Calgary’s Bo Levi Mitchell command a lot of attention, Masoli often flies under the radar.

“Jeremiah might be one of the hardest quarterbacks to sack,” said Coleman. “I don’t think he gets the respect that he deserves.

“His pocket awareness, his footwork, his way to extend plays. He passes in the weirdest positions. He gets my respect.”

Masoli is tied with Reilly for a league-high 18 interceptions. Coleman, who made two interceptions in a game against Toronto this year, was asked about picking off Masoli. 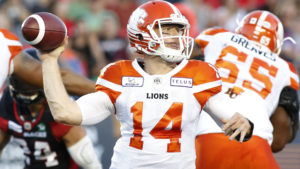 Into the Spotlight: 30 Players to Watch in the Grey Cup Playoffs

New legends will be born this year, but who? CFL.ca returns with a list of the Top 30 Players to Watch in the 2018 Grey Cup Playoffs … READ LIST.

“I definitely can,” he chuckled.

Both teams have stumbled down the stretch. The Lions have lost their last two games while Hamilton is winless in three.

Back on Sept. 22 the Lions battled back from a 14-3 half-time deficit for a thrilling 35-32 overtime win against the Ticats. The teams scored three touchdowns in the final three minutes, BC’s last coming with no time on the clock.

The next week the Lions travelled to Hamilton and were blown out 40-10.

The Lions, who missed the playoffs last year, faced Hamilton in the 2009 East Semi-Final. BC won the game 34-27 with Casey Printers throwing the winning touchdown to Ian Smart.

BC lost the East Final 56-18 Montreal, who went on to beat Saskatchewan for the Grey Cup.

Veteran quarterback Travis Lulay will start against Hamilton but has struggled his last few appearances. He was pulled at the end of the first half of last week’s 26-9 loss to Calgary after completing 10 of 16 passes for 111 yards and two interceptions.

Lulay has thrown for over 200 yards only once in his last four starts. During that stretch he’s tossed five touchdowns (four in one game) and seven interceptions.

“You judge who you are and where you’re at on an entire season,” he said. “What ever happened last week, good or bad, just doesn’t matter.

“Maybe for some guys that influences how you feel for the next week, but for me, for us offensively, this group has a lot of confidence about being able to play to the level we need to be at to win a playoff game.”