Andrew Major has been a Canadian Football League fan for a long time.

Beginning in the 1970s — when his Rough Riders season-ticket holder father would take him to Frank Clair Stadium — through a move to Calgary, Major has been around the league for decades.

And in 2018, his extensive knowledge of the league paid off as he claimed the $10,000 CFL Fantasy grand prize.

“The boys and I are going to have one fun night at Grey Cup, and beyond that, the family and I are probably going to put it towards a vacation in the spring,” laughed Major, who works in the financial sector in Calgary. “My daughter’s now 15 (and) a diehard Stamps fan.

“When Grey Cup was in Ottawa last year, she came with me, got some time with her grandmother and aunt, while me and my friends went to the various events,” continued Major. “She’s lined up for Edmonton this year and Calgary next year — that’s what the CFL is about, having various generations at its family game.” 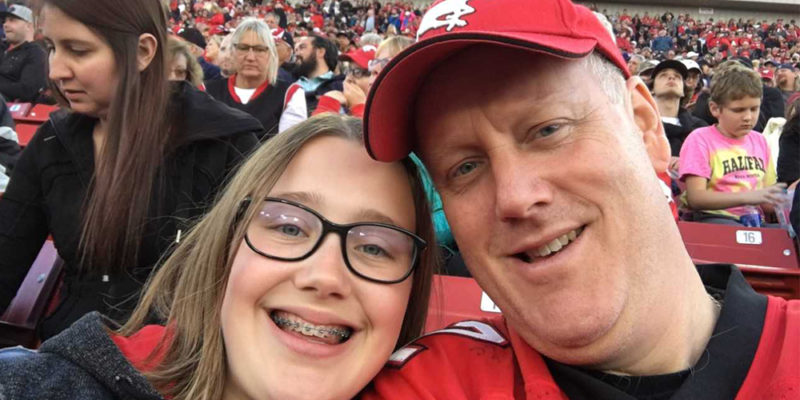 Major and his teenaged daughter at a Stampeders game this season. (provided photo)

While the 2018 CFL Fantasy champion was hesitant to reveal too much about his strategy, he did admit that he was firmly on the ‘use your defence slot’ side of this season’s hottest fantasy debate.

“I was careful with my defences, I think I picked one probably 18 or 19 of the weeks, with just one or two where I saw value in other positions,” explained Major. “In most cases, your long-term average result was going to be better with a defence.”

The champ also had a couple go-to picks throughout the 2018 campaign.

“I like the receivers in Ottawa a lot,” explained Major. “I like Sinopoli or Ellingson, but it was always tough to decide which one to pick. Duke Williams and Bryant Mitchell in Edmonton were two guys I also tended to take regularly.”

CFL Fantasy’s overall leaderboard ended up being dominated by his office; beyond his own title-winning fantasy season, the fourth-place finisher — well-named ‘Eric The Gable Guy’ — is a coworker. 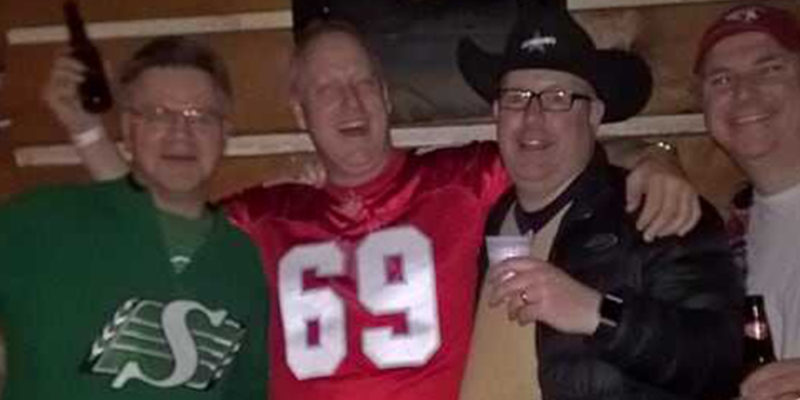 Major (second from left) and friends at one of their annual Grey Cup pilgrimages. (provided photo)

“He’s a big NFL fantasy guy, and he has models that he started to apply to the CFL. As I like to tease him, he came second in the office pool,” laughed Major. “He’s more mathematical about it, which was interesting to see him take the emotion out of it.

“I used my knowledge of the CFL (and) various matchups to get what I needed out of each pick,” summarized the now-longtime Calgary season-ticket holder. “If you look at my picks, rarely did I pick a player that was up against my Stamps (because) early on, they were dominating defensively (and) I just tried really look at matchups.”

Major will be in Edmonton, CFL Fantasy winnings in-hand, for Grey Cup; the CFL Fantasy season is not over, with $6,000 still up for grabs in the Level Up week-by-week playoff competition. Set your roster here!