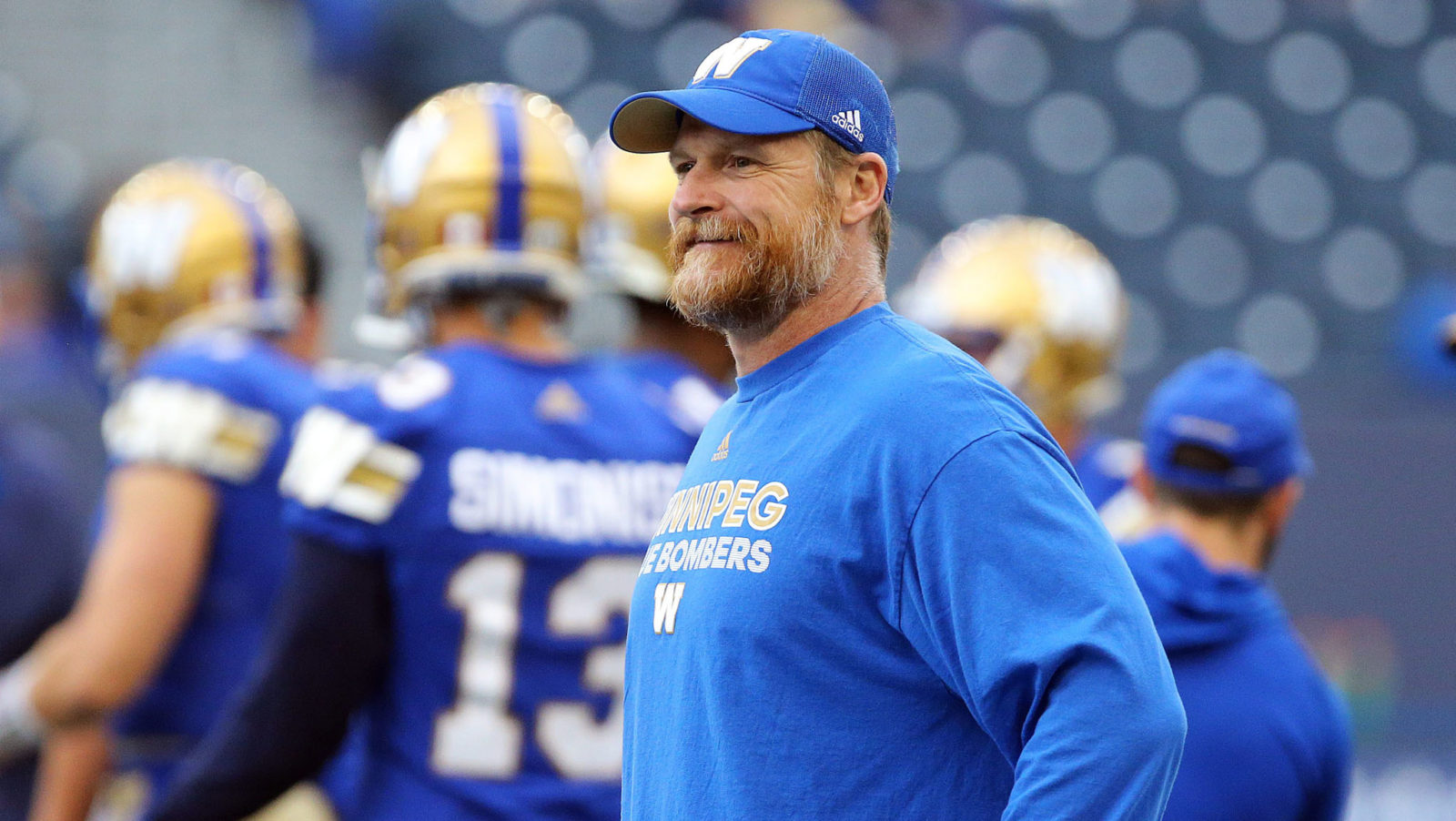 Think for a moment where the Winnipeg Blue Bombers might be if Mike O’Shea had given in to the noise.

It was midseason, Matt Nichols wasn’t playing well and the Bombers looked like they were nosediving. They lost the Labour Day game as well as the Banjo Bowl, and the calls for a change at quarterback hit a crescendo. In that second game, Nichols threw three interceptions and was replaced by rookie backup Chris Streveler. People wanted that change to be permanent.

Columns were written, call-in shows were full of opinionated fans and Twitter was its usual flood of hot takes and demands for the extreme. At the root of it, people weren’t wrong. Nichols wasn’t playing well and the season was tailspinning. The pair of losses to the Riders dropped the Bombers to the bottom of the West, with a 5-7 record.

RELATED:
» O’Leary: Bombers welcoming cold weather, hostile environment
» Into the Spotlight: 30 players to watch in the Grey Cup Playoffs
» Head to Head: Who has the edge in the Western Semi-Final?
» The Weekly Say: Who should be the Grey Cup favourite?

Mike O’Shea stood in that firestorm and didn’t flinch.

“I think honesty and trust, that’s what loyalty is,” O’Shea said this week in Winnipeg. His Bombers came through that dark moment this season, responding to the Banjo Bowl losses with five consecutive wins, keeping a desperate Edmonton team at bay and out of the playoffs.

If only a little bit, the long-suffering fans of the Bombers can exhale this week. Their team is in the playoffs for the third year in a row, an experienced core that’s healthy and playing its best football at the perfect time. Would they be on their way to Regina this week if the coach was the type to wilt under pressure?

“I think he likes to see things through. He believes in process. He doesn’t alter any step in that process to appease people outside of these walls,” said Bombers defensive backs coach Jordan Younger, who was a teammate of O’Shea’s with the Argos.

“Professional sports can be fickle and it’s definitely an immediate gratification that fans want and that organizations want. It’s refreshing to see a guy like Mike O’Shea that’s willing to stay the course and achieve his goals.”

With Nichols, O’Shea simplifies what seems like would be a difficult decision.

Players see those types of decisions made and it carries weight with them.

“That’s someone that anybody wants to fight for, fight with.” Bombers defensive back Kevin Fogg said.

“A guy that’s loyal to you, you want to do what you can to have their back and do whatever you can to do your job. It’s going to be a team thing but he’s our leader. Your own leader is fighting for you going to bat, day-in, day-out. It’s easy to get behind someone like that.”

Nichols found his game in the final third of the season. Having thrown 12 picks through nine games, he’s only thrown one since, to go with seven touchdowns. In his final regular season game, the Bombers finally topped a Calgary team that’s had their number for years. Nichols threw a season-best 358 yards with two touchdowns.

“That kind of loyalty, that kind of willingness to take the lows and the highs with the players, I think it endears them to Mike O’Shea,” Younger said.

“A guy like Matt Nichols who goes through that tough stretch and he’s able to come out on the other side playing at a very high level, that story doesn’t happen without a coach that believes in you.

“There are other guys that are capable of that, but maybe they’re not in situations where they have a coach that’s willing to ride with them. That’s a testament to Mike O’Shea’s desire to see things through.”

“It means everything,” Nichols said of O’Shea sticking with him.

“He preaches to not listen to outside noise and I think there’s a lot of that during the course of a long season. So for someone to preach that and also act upon it when there are certain scenarios that come up during the season, obviously where if you listen to the masses or the outside pressures, things could have been different. To have that continuity in the locker room I think was just huge and powered this football team to get to where we are now.”

This year, it was Nichols. At the end of last year, it was Richie Hall. Younger knew O’Shea as a teammate with the Argos and remembers him being the guy that went full-out when the team was playing out meaningless end of regular-season games. On his coaching staff, he sees someone that looks for the positive, is always focused, regardless of the volume of noise or the heat from the firestorm. With O’Shea, there are lessons by osmosis for players and aspiring head coaches alike.

“There aren’t a lot of guys like that in professional sports, period,” Younger said. It’s the nature of the game. There’s so much pressure to perform.

“When you recognize things like three games, four games that’s a streak, that’s a trend. So when you see things trending in a negative direction, the automatic reaction to it is to change things. Those (coaches) that through so many circumstances, things aren’t able to play out that way…maybe it’s outside pressure, maybe they don’t have the commitment necessary, his attitude isn’t positive. It’s rare to find those guys who are willing to put their name on the line, their record on the line and see things through.”

O’Shea stood there on Wednesday at the podium that he gets behind just about every day during the season. His answers are often short. Three years in, it feels like we don’t know a lot about him. The other feeling that’s there when you spend any amount of time around his team is that his players would stand in that fire for him, too.