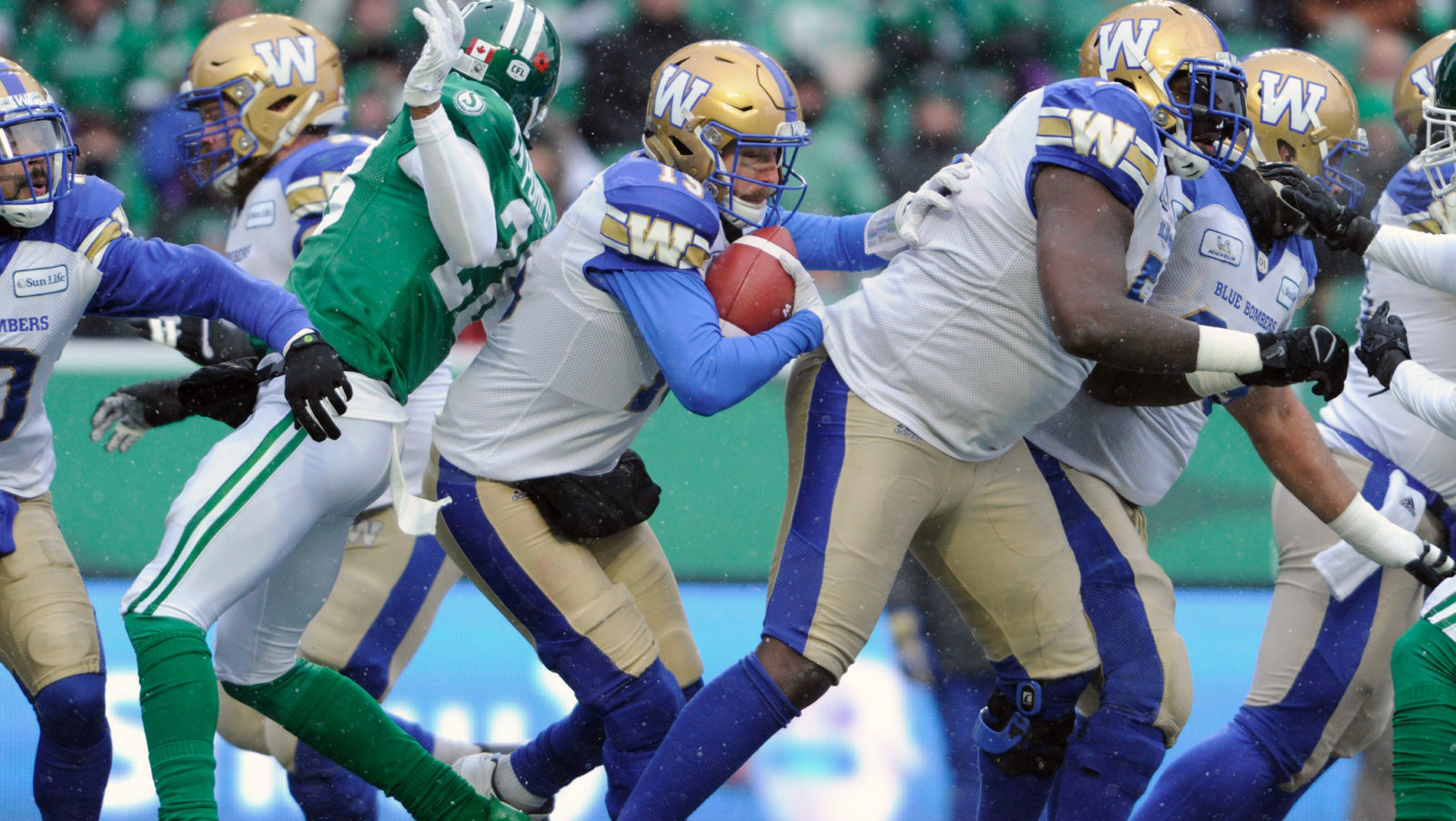 By the time you’re reading this, whatever kind of celebration the Winnipeg Blue Bombers had is over.

“Celebrate this for 24 hours and then it’s on to the next one.”

For the first time in seven years, the Bombers have a next one to play. For the core of this team, the win is the first in three consecutive first-round tries. When the game ended, there was modest celebration. Offensive lineman Jermarcus Hardrick bear hugged Coach Mike O’Shea and players took in the moment on the field. By the time O’Shea, Matt Nichols and Andrew Harris got to their post-game interviews, they were more reserved.

“I don’t think it’s a milestone,” Harris said, after rushing for 153 yards and the game-sealing touchdown.

“We can’t look too far ahead. We still have business to handle. Calgary’s a great team and we need to go 1-0 again next week.”

The next game has to be the focus, but the Bombers’ win in the cold, unfriendly confines of Mosaic Stadium is worth noting. What if the Riders had been able to buck the trend of the game and make something of that last drive? If a hail Mary was thrown up and the prayer answered in the end zone?

A team that’s been good for a long time now, spinning its tires in the first week of the playoffs for the third year in a row would have been something that at the very least would require some deep examination. These Bombers needed to take that next step as a team. They want two more steps in their season, but this first one was huge.

O’Shea didn’t want to compare the past to the present.

“I don’t compound it by taking the emotion of previous years into account,” he said, showing no signs of ill-effect from the Hardrick bear hug. “This is one game. We feel good about it and feel great for the guys, they battled. It’s nice to see this group smile.”

Fair or not, the results always speak about the quarterbacks. This isn’t Nichols’ first taste of playoff victory. He earned a win in 2014, playing in place of an injured Mike Reilly, when Chris Jones was the coach in Edmonton. But taking a team that’s solely his deeper into the playoffs should change the conversation around him when QB debates come up.

“It’s good, our goal is to be 1-0 after this week and we are,” Nichols said after playing a clean game against a turnover-happy Riders defence.

“The goal won’t change this week. We want to go 1-0 again. That’s the way we truly approach it, the last back half of the season is one game at a time and that’s all it is for us.”

The celebration was short-lived, but for a team that needed a win after two tough previous playoff losses, and a fan base that’s aching to end a 27-year-old Grey Cup drought, Sunday night was a chance to exhale and be happy that there’s a next week to get ready for.

“You should see my phone right now,” Harris said. “(The win is) huge to everyone. My friends and family, I’m getting emails from business people, everyone’s excited. We can enjoy this now but we have to flush it and move on to Calgary.”

A bet between the mayors of both cities will see Mosaic Stadium lit up in the Bombers’ blue and gold on Monday night. It’ll be the perfect way to move on from this rare playoff win, with the iconic stadium in Saskatchewan wearing the colours of its rivals.