Weekly Predictor: Another ground out win in the making? 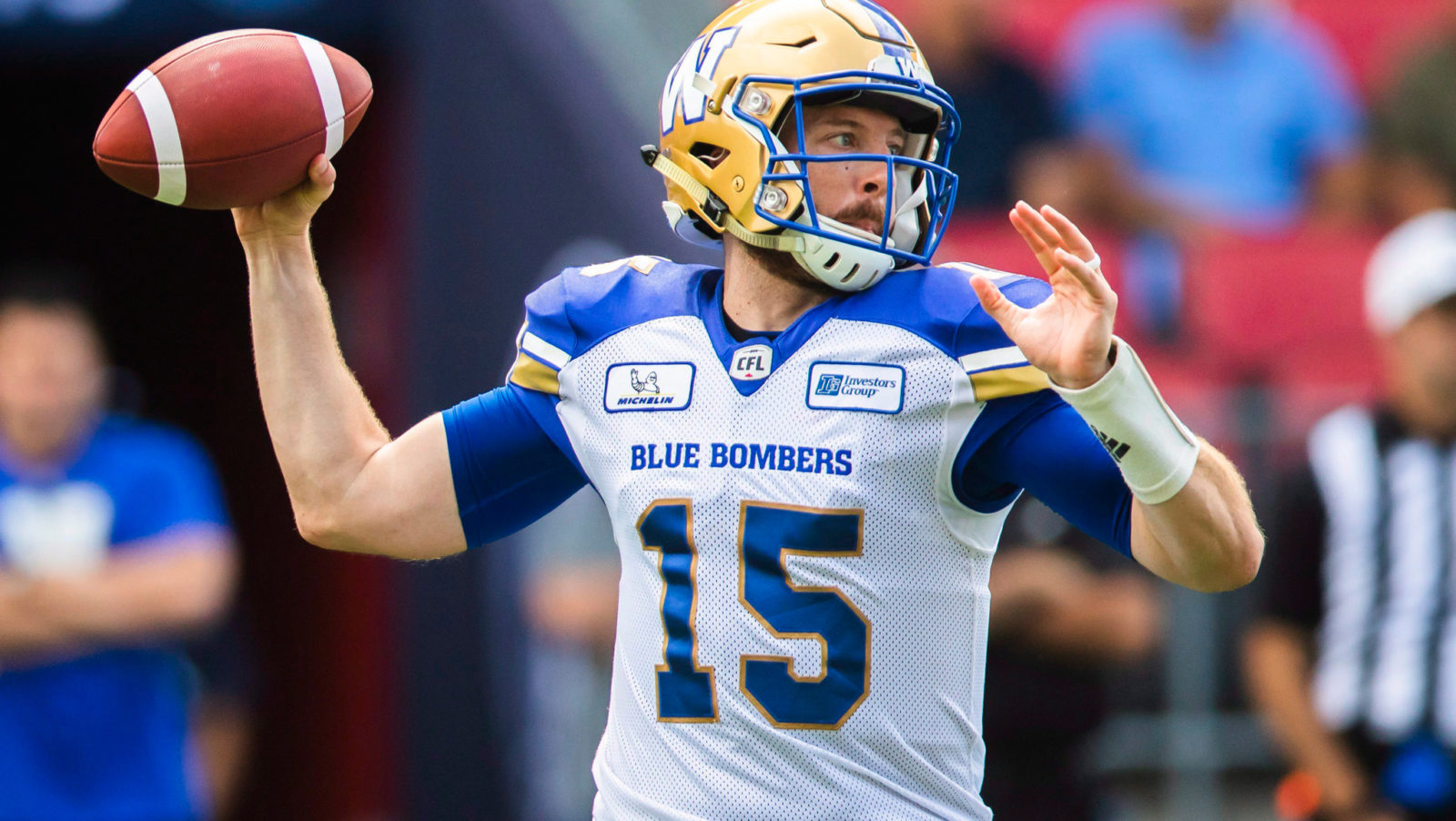 Weekly Predictor: Another ground out win in the making?

One win is all you need and you’ve punched your ticket to the big show in Edmonton for the 106th Grey Cup.

The Ottawa REDBLACKS head into the Eastern Final with the regular season edge over the Tiger-Cats, having swept the Tabbies 3-0 in the seasons series. But will the Black and Gold cast some shade over TD Place on Sunday with the momentum following the Eastern Semi-Final?

As for the Western Final that will be going down at McMahon Stadium, will the injury-riddled Stampeders have enough in the tank to overcome the soaring Bombers, or will Winnipeg continue their western rumble?

With just two games on tap on Sunday, here are Jamie Nye’s picks for the Divisional Finals. 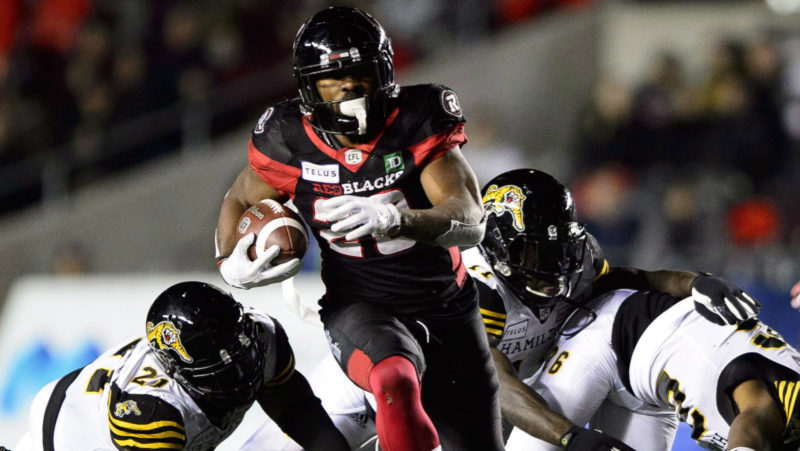 William Powell breaks loose on a run play against the Hamilton Tiger-Cats from their Week 19 matchup at TD Place. (The Canadian Press)

The Hamilton Tiger-Cats took advantage of a lot of B.C. Lions mistakes last week for a blowout win in the East Semi. Now, the odds that the same mistakes will be made by the Ottawa REDBLACKS are low.

Hamilton couldn’t beat the REDBLACKS in the first three games of the season and while the old saying is, it’s hard to beat a team three times in a season, how tough is it to do it four times?

Jeremiah Masoli threw too many interceptions in the earlier contests, while Trevor Harris was the far more efficient quarterback in the three games against each other.

You also have to factor in the forecast for this one and while the current expected high of -2 isn’t frigid, it will have an impact on the passing game to a certain degree and if the forecast continues to cool off, the reliance on the run game increases. I favour Ottawa in that category.

Plus, I really do think rest is best and the REDBLACKS were able to rest starters in their season finale and then had a good week of extra prep to get themselves set for the final.

When the opponent is outright dropping the ball and looking as off as B.C. is, I wonder how Hamilton will respond when it’s Ottawa who punches them in the mouth as the Lions never tested the Tiger-Cats in the Semi.

It should be a dandy. 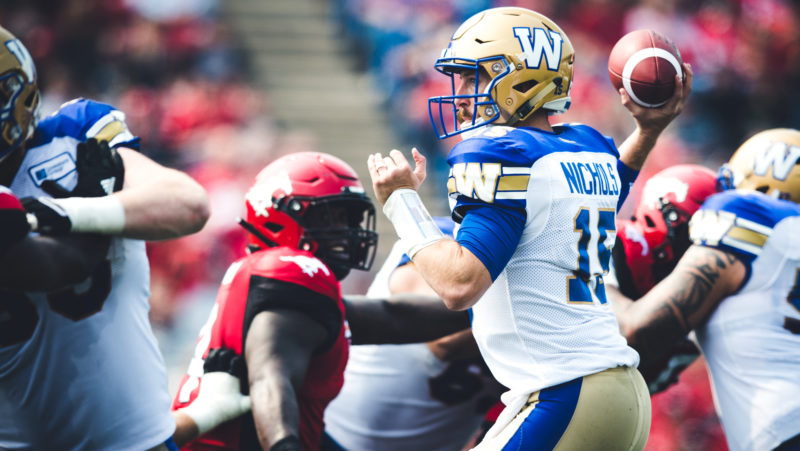 Matt Nichols gets ready to let it fly in a game against the Calgary Stampeders earlier this season. (Johany Jutras, CFL.ca)

The Winnipeg Blue Bombers were well prepared and handled themselves well in a hostile environment in Saskatchewan to advance to the final. Aside from a loss when they rested a few starters, the Bombers have won six straight and are the hottest team remaining in the playoffs after eliminating the second hottest team.

The forecast for Calgary is far better than the -20 windchill Winnipeg played in this past week. A daytime high of 12 degrees allows for better odds the passing game will factor in rather than needing to rely on the running backs. Bo Levi Mitchell and the Stamps will be happy to hear that as they are much better at pushing the ball downfield through the air than they are on the ground.

The Bombers have recently beat Calgary to give themselves confidence going into this one. After a quiet day passing, I’m looking for Matt Nichols to be able to utilize play action with Andrew Harris to give him time to find the receivers as Calgary has to be focused in on 33 after his 150+ yard performance in the West Semi-Final.

The defences are both among the best in the league so it could be another low scoring one between these West rivals.

Calgary got what could be a much-needed break to try to figure out what went sour in the final few weeks of the season. It just did not look like the same dominant force Calgary appeared to be at the start of the season. I’m still not convinced the Stampeders are the best team in these playoffs anymore. In fact, their opponent may be ready to prove that the power has shifted in the West Division. 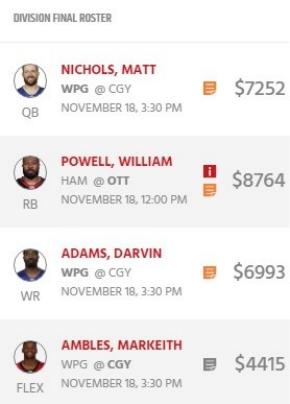 QUARTERBACK – Matt Nichols – I’m taking the quarterback with the warmer weather to have better odds to throw the ball. And with Nichols in Calgary, I think he can air it out much more than we saw last week and Andrew Harris could even be a factor out of the backfield rather than between the tackles like he was last week. Nichols also means you can afford high-quality talent elsewhere. Bo would be a fine pick here as well.

RUNNING BACK – William Powell – A colder day in Ottawa and I’d be staying on the ground to really test the Hamilton Tiger-Cats who weren’t tested on the ground last week against the Lions. Command the clock and keep Masoli and crew on the sideline cooling off would be my strategy and Powell can be just the guy to do it. He should be fresh after three weeks off.

RECEIVER/FLEX – Darvin Adams / Markeith Ambles – Adams had a quiet day in Saskatchewan as his ability to spread the field didn’t come into the equation in ice-cold Regina. It should be a different game plan this week with more opportunities to go deep and if more defenders are up trying to guard against Harris, I wonder who open Adams could be if he gets behind his guy.

Ambles has scored in four straight games and why not keep the good times rolling with a fine investment at a lower cost. It’s clear Mitchell has a confidence and rapport building with the young receiver and trust is a big thing for Mitchell when he chooses who to throw the ball to.