O’Leary: Bombers did everything but win the game 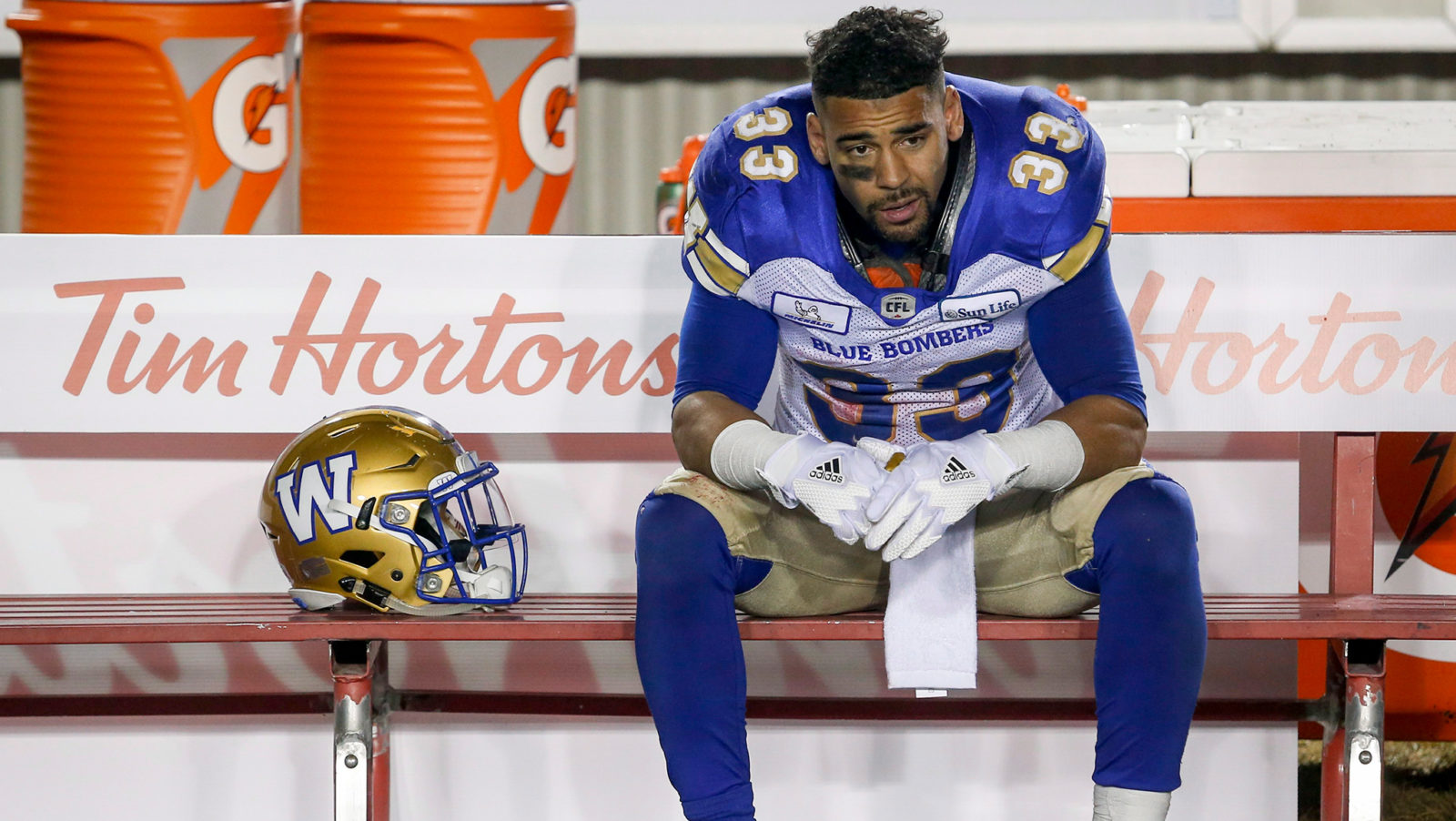 O’Leary: Bombers did everything but win the game

Andrew Harris walked off of the field and down the cold, grey corridor in the underbelly of McMahon Stadium, a towel over his shoulders, his helmet in his hand and was completely silent.

Out on the field, the party was just getting going. The Calgary Stampeders were crowned West Division champions again, in their seventh consecutive appearance in the game, having outlasted the Winnipeg Blue Bombers 22-14. While the music blasted, Stampeders players hugged and high-fived, surrounded by their friends and families.

Down that corridor and into the open door of the Bombers’ locker room, Harris found his people. Inside the door was a pack of his teammates, standing up still in full uniform, just as silent as he was. The team’s star running back walked in and dropped his head into the shoulder pads of a teammate and let all of the emotion out.

“It’s difficult. You go into a game like this with no doubt that you’re going to win and when you don’t it’s a pretty terrible feeling.” 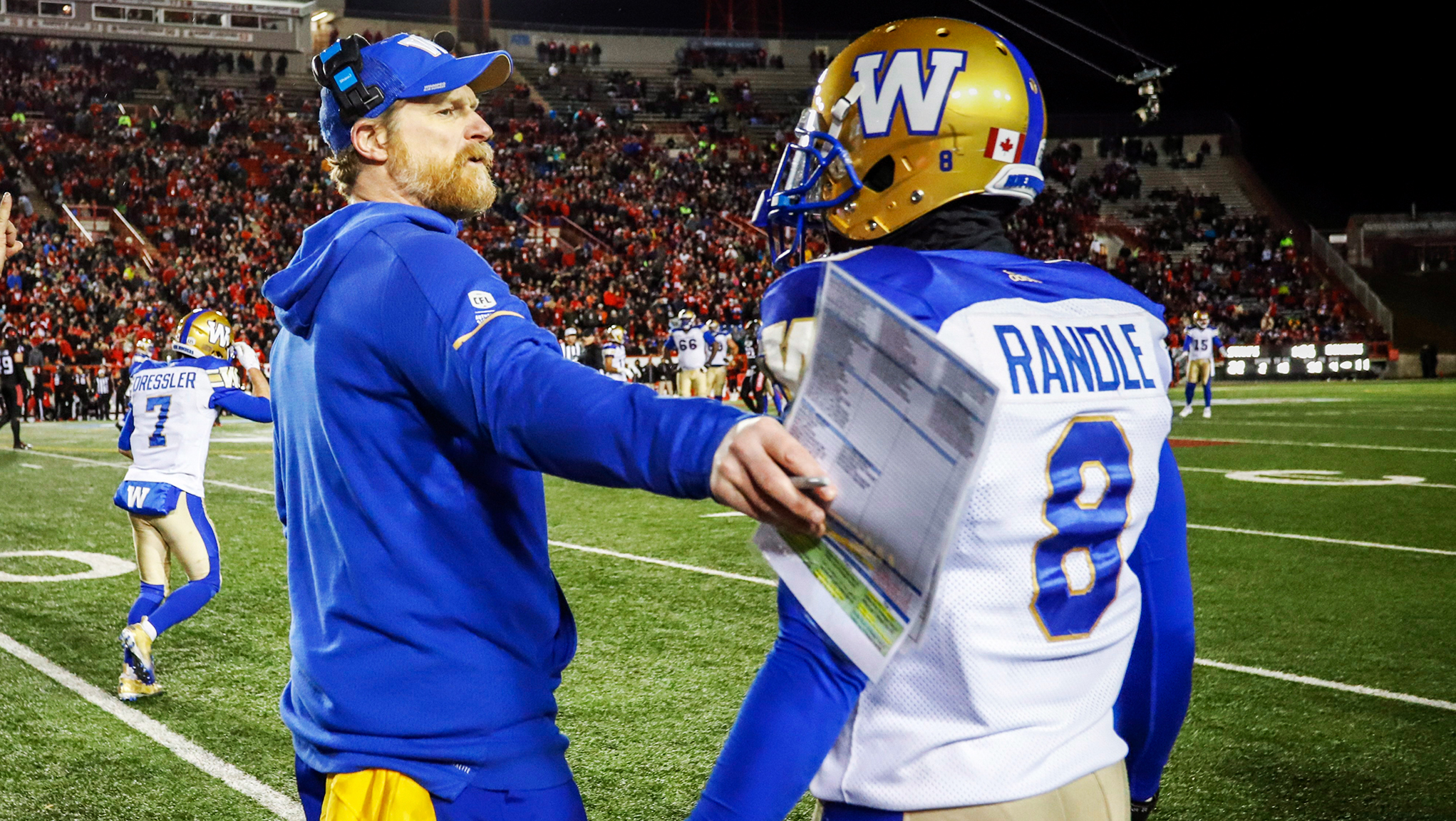 Bombers’ coach Mike O’Shea looked just as drained, like the pain of the loss landed on him from a few stories up as time expired on the game and his team’s first trip to a West Final.

“(You can’t say anything) right now. It’s too raw,” he said of the message for his players. “Stick your chest out and put your chin up and let’s talk about it tomorrow.”

When that discussion begins they can talk about, among other things, how they mostly played the game they needed to to unseat a team that only two others (Saskatchewan, 2013; Edmonton, 2015) have been able to knock off in the last seven years.

The defensive gridlock that we saw on Sunday was the Bombers’ best path to the Grey Cup game. While the Stamps managed a pair of touchdowns in the second quarter to open up a 14-6 halftime lead, Winnipeg’s defence led the charge out of the gate in the third quarter.

It started with Brandon Alexander’s forced fumble and Taylor Loffler’s recovery at Calgary’s 46-yard line, on the Stamps’ first offensive play of the third quarter. There was a near interception on Bo Levi Mitchell on the Stamps’ next drive, which ended with Calgary giving up a safety. All of that happened in the first 2:40 of the third. The score was 14-8, but the Bombers had all of the momentum.

“They played incredible,” Nichols said of his team’s defence. “I think they deserved better. We just score one or two more times…we had plenty of opportunities, especially in the second half. They got us the ball back and it’s unfortunate we just couldn’t get anything going. I think our guys were playing hard. Everyone was playing good and (Calgary) just outplayed us today.”

Calgary’s offence had faltered, opening the window just enough for the Bombers to take advantage and they just couldn’t do it. They got two more field goals from Justin Medlock but couldn’t solve Calgary’s defence to find the end zone. Harris, so emotional after the game and the offensive key to their win a week ago in Saskatchewan, was held to 71 yards on the ground.

“I’ve never felt like this in my life after a loss. We have something special here and I know it’s never gonna be the same,” Harris told The Canadian Press.

“That’s the part that hurts the most. I just love this group of guys and I wanted nothing more than to win a Grey Cup with this group. I’m sad, man, really sad. It’s more than just football.”

“They did what they’ve done all year,” Nichols said of Calgary’s defence. “They covered guys up, they played good tonight and we just couldn’t get in a rhythm. Full credit to them. They just outplayed us.”

There was an overthrow to Darvin Adams in the end zone that Nichols said he’d think about in the days and weeks to come, a pass that felt good leaving his hands, but was pushed a little by the wind and out of the star receiver’s reach.

By the fourth quarter, with Calgary holding a 14-11 lead, the 29,268 fans at McMahon and the players on the field knew the next touchdown would likely be the gamebreaker either way. Mitchell, whose numbers weren’t spared in the defensive battle (17-31, 214 yards) had the breakthrough, finding Eric Rogers for a 10-yard touchdown that put the game out of reach.

With an uncertain offseason awaiting the entire league, Nichols knew what was at stake. It won’t be the same next year, he told reporters. He wanted one more game with that group. There were no words on Sunday night, nothing to break that silence. 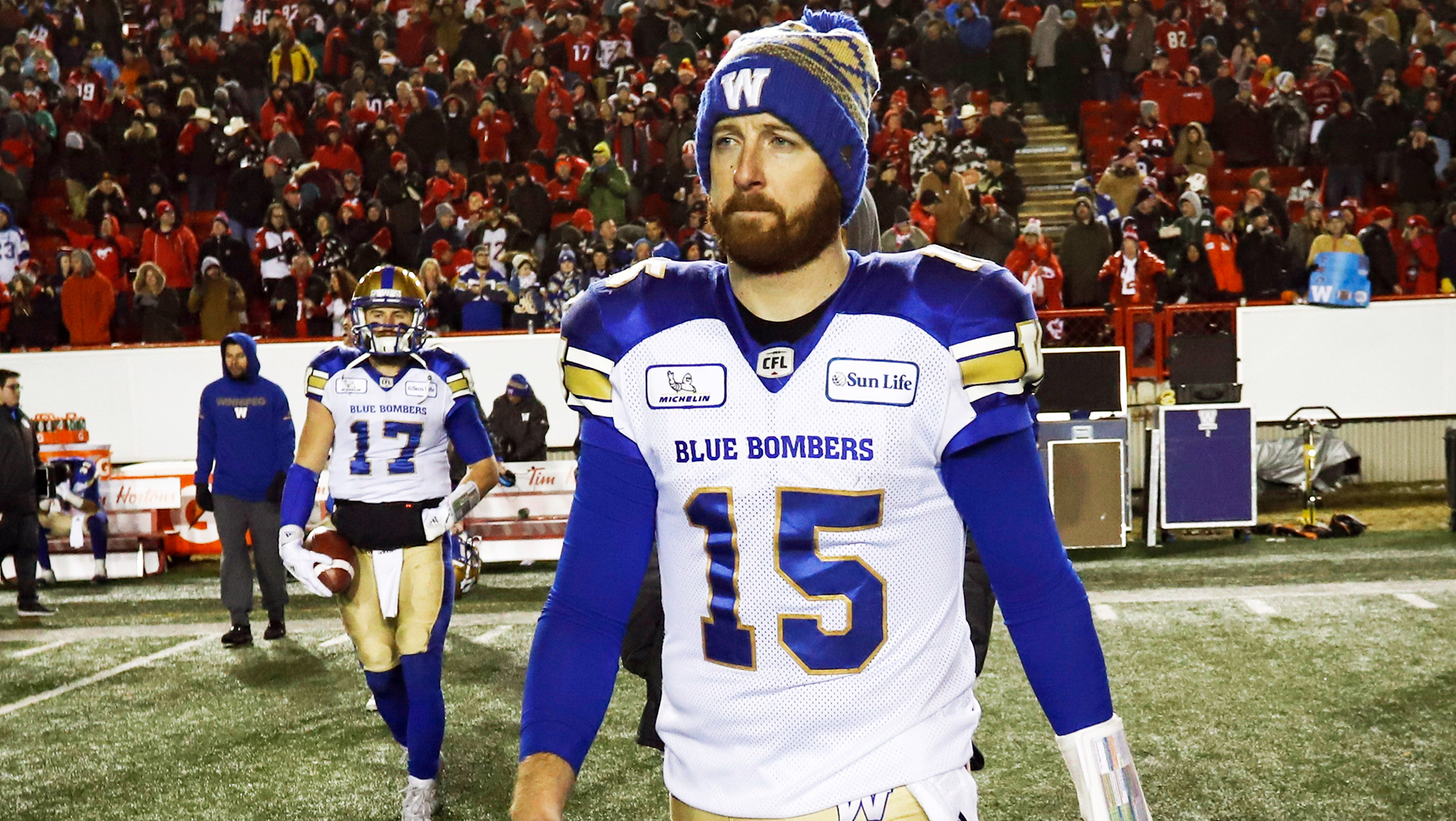 Quarterback Matt Nichols exits the field after suffering a loss to Calgary in the Western Final Sunday at McMahon Stadium (Dave Chidley/CFL.ca)

“(Monday) will be the last time that this team is all together and if certain guys want to say some things, I know I’ll have some things to say. I love this team. I love playing with this group of guys.”

Stampeders coach Dave Dickenson spoke on Saturday about how important it is to him that his teams enjoy the journey of a season, that they can’t just be there for the one game that nine teams chase and only two get to play in every year. Winning championships is the main thing, but there’s more to the game than that.

“I saw Matt Nichols (after the game) and I said, ‘Don’t let a loss take away anything that you’ve done,’” Dickenson said.

“It sucks. He’s not going to get any consolation out of that wisdom of mine, but I’ve been there. They’ve had a nice year and they’re a great football team. They play the game hard and so does Matt.”

Not one for more than feeling the loss and not knowing what the future holds for his roster, O’Shea said his team played well, just not well enough.

“They’ve been on a hell of a journey,” he said. “They’ve all gotten better and they’ve all grown stronger. I believe they really became a team.”