Steinberg’s MMQB: Does anyone own November like Eric Rogers? 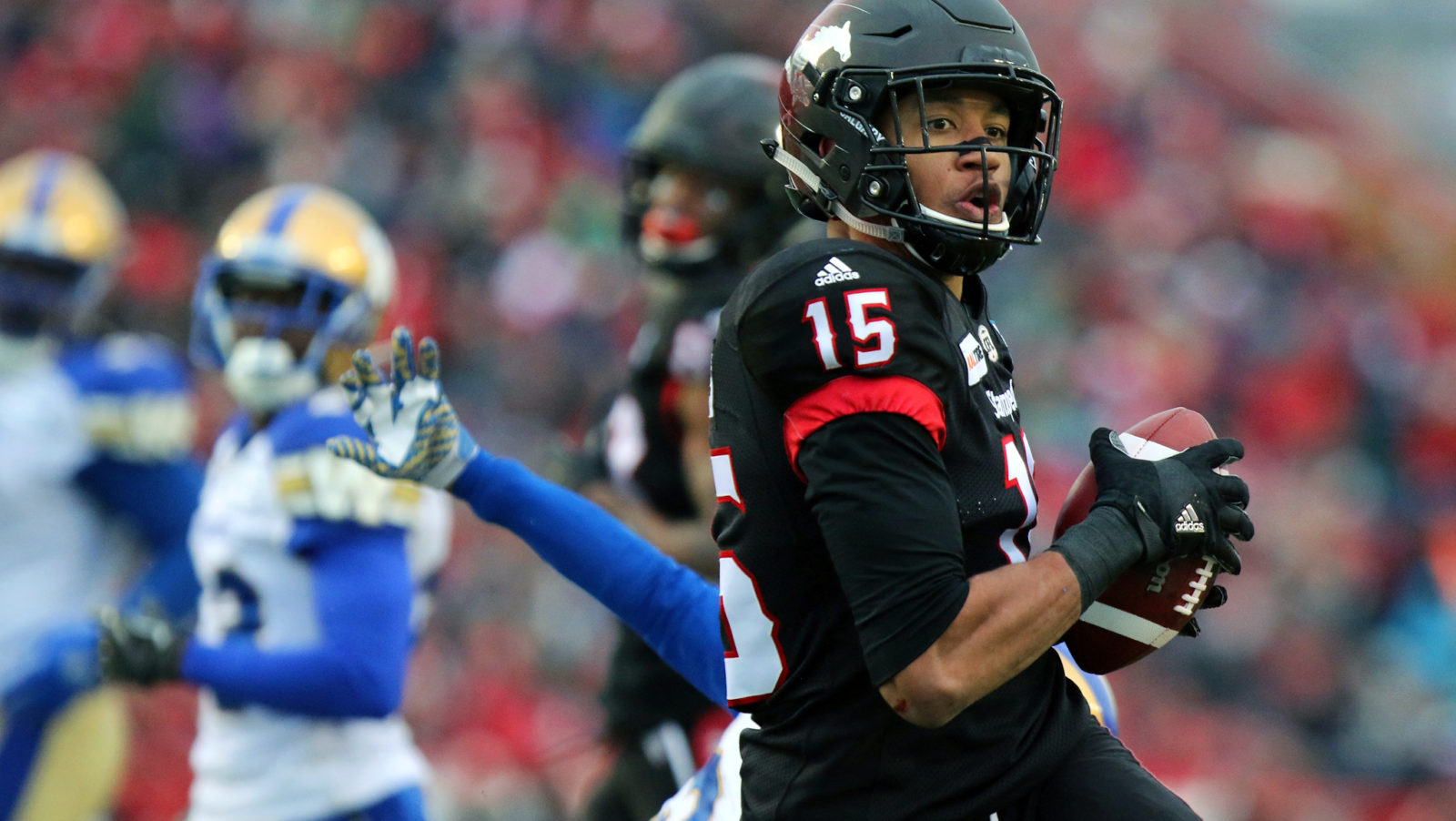 Steinberg’s MMQB: Does anyone own November like Eric Rogers?

Eric Rogers is rightly known as one of the league’s most dangerous receivers. When it’s all said and done, though, Rogers might be remembered most for what he’s done in November. After another epic playoff performance in Sunday’s Western Division Final, Rogers has written one of the best postseason resumes you’ll find anywhere.

Rogers caught three touchdown passes as his Calgary Stampeders topped Winnipeg 22-14 and earned a third straight trip to the Grey Cup. It was a dynamic performance from one of the league’s deadliest red zone receivers, and Rogers saved his best for last with a crucial 10-yard touchdown catch in the fourth quarter that only a few receivers could haul in.

Sunday was the fifth time Rogers has suited up for CFL post-season action, and he’s been a massive impact maker in each and every game. Starting with his coming out party in the 2014 playoffs, Rogers has dominated like few others in November:

Let’s just put this into context for a second: In five playoff games, Rogers is averaging over 83 yards and just under two touchdowns per. As good as he’s been in the regular season, Rogers has taken his game to a whole new level when things matter most. And it’s hard to pinpoint which performance is most impressive.

What Rogers did in 2014 was special because, well, no one had heard of the guy before. Rogers spent almost all of that season on Calgary’s practice roster and was only activated for a pair of late games. While he was impressive in his CFL debut, it was his second game that cemented his spot on the Stamps’ depth chart heading into the playoffs.

In a Week 20 win over the BC Lions, Rogers hauled in a pair of touchdown passes to finish the season and put himself front and centre heading into a bye week. The rest is history, because what he did in a pair of wins en route to a Grey Cup title was instrumental and established Rogers as an elite receiver.

Knowing what Rogers has been through over the last two years, though, his first 2018 playoff outing might feel a little more special. Yes, he caught a hat trick of touchdown passes, which is ridiculous, but I wonder how vindicated Rogers felt when the clock hit zeroes.

RELATED
» Mitchell: There’s no moment too big for Rogers
» Harris silences critics in blowout win over Ticats
» O’Leary: Bombers did everything right but win

Prior to Week 1 of this season, Rogers hadn’t played meaningful football since a 2015 Western Final loss to the Eskimos. After signing with the NFL’s San Francisco 49ers, Rogers tore his ACL in training camp and was waived just under a year later. November 2015 to June 2018 is a long time to go without taking an important snap.

Well, taking his most important snaps of the season, Rogers was the most impactful player on the field on Sunday. The last time the Stampeders won the Grey Cup was with Rogers on field in 2014; if he’s on his game this weekend, he’ll give his team a solid chance to win again. Based on the playoff resume Rogers is crafting, that’s a pretty darn good bet.

No one is shocked to see the Ottawa REDBLACKS going to the Grey Cup this year. After all, this is their third trip in four years to the big dance. What is different, though, is the guy leading the way.

Ottawa’s Grey Cup appearances in 2015 and 2016 were helmed by Henry Burris at quarterback, and the veteran sealed his legacy with a superlative performance in his second trip. Now, after years of waiting for his chance, and his first playoff win, it’s Trevor Harris leading the REDBLACKS against Calgary.

Harris has been starting games on a regular basis since the 2015 season and boasts really good numbers. For various reasons, though, he hasn’t had a ton of playoff success or, in many cases, a chance to succeed.

With Toronto in 2015, Harris saw Ricky Ray reclaim the starting job upon a return from injury late in the season. A year later with Ottawa, Harris posted incredible numbers but ran into injury issues and lost his starting job to Burris, which worked out well for the team. Last year finally saw Harris get a playoff start, but he struggled in an Eastern Semi-Final loss to Saskatchewan. I’ll tell you what: he didn’t struggle in his second start on Sunday.

Harris was in video game mode in a 46-27 win over the Hamilton Tiger Cats in the Eastern Final. Harris threw just three incomplete passes while throwing for six touchdowns and 367 yards in perhaps his greatest performance to date. I can’t think of better momentum to ride into the biggest game of Harris’s career.

Right now, Harris is playing the best football he’s ever played, and it goes beyond his huge performance on Sunday. When the REDBLACKS needed him most down the stretch, Harris stepped up in a big way. Going into a Week 14 meeting with the Riders in Regina, Harris had been an inconsistent quarterback at best and his team was sitting 6-5 and tied with Hamilton for top spot in the East. Things changed dramatically from that point forward.

Starting with a 30-25 win in Saskatchewan, Ottawa went 5-2 down the stretch to seal top spot in the East. In doing so, they beat the Tiger-Cats twice in a crucial home-and-home late in the year, while also taking wins over the Eskimos and Argonauts. Harris’s stat line in the six games he started was exactly what you wanted to see: 11 touchdowns, two interceptions, and and more than 315 passing yards per game.

Harris has overcome a number of hurdles many were wondering about in 2018. He essentially stayed healthy all season, consistently won important regular season games, and, most importantly, helped Ottawa win a playoff game. His next challenge to conquer is a Grey Cup; the way he’s playing heading into this weekend leads me to believe he’s in the best possible situation to do just that.

Neither the Bombers nor Ticats will be ready for consolation prizes this morning, which is understandable. But in a few weeks, or months, these two teams can look back on their 2018 seasons and see the progress they’ve made.

Hamilton established a number of things in 2018 that should prove vital going forward. Jeremiah Masoli is a viable number one quarterback, Brandon Banks is this league’s most dangerous receiver, and Delvin Breaux is a cornerback you just don’t throw at. Throw in names like Ted Laurent, Alex Green, and Luke Tasker, and the ingredients are there for a successful 2019.

The case is a little different for Winnipeg. The Blue Bombers returned to the playoffs after four years in 2016, but after a pair of disappointing losses, finally got over the hump in this year’s Western Semi-Final. They weren’t bad against Calgary this past weekend by any stretch; in reality, they ran up against a juggernaut defence playing at the top of their game.

Winnipeg can use the knowledge they gained in the 2018 post-season as motivation heading into next season. The Bombers know they can win playoff games, as they proved against Saskatchewan. And they know they can hang with the Stampeders, which they proved this weekend.

For both teams, it’s all about taking another step or two in 2019.