Landry: REDBLACKS arrive in Edmonton as a ‘different team’ 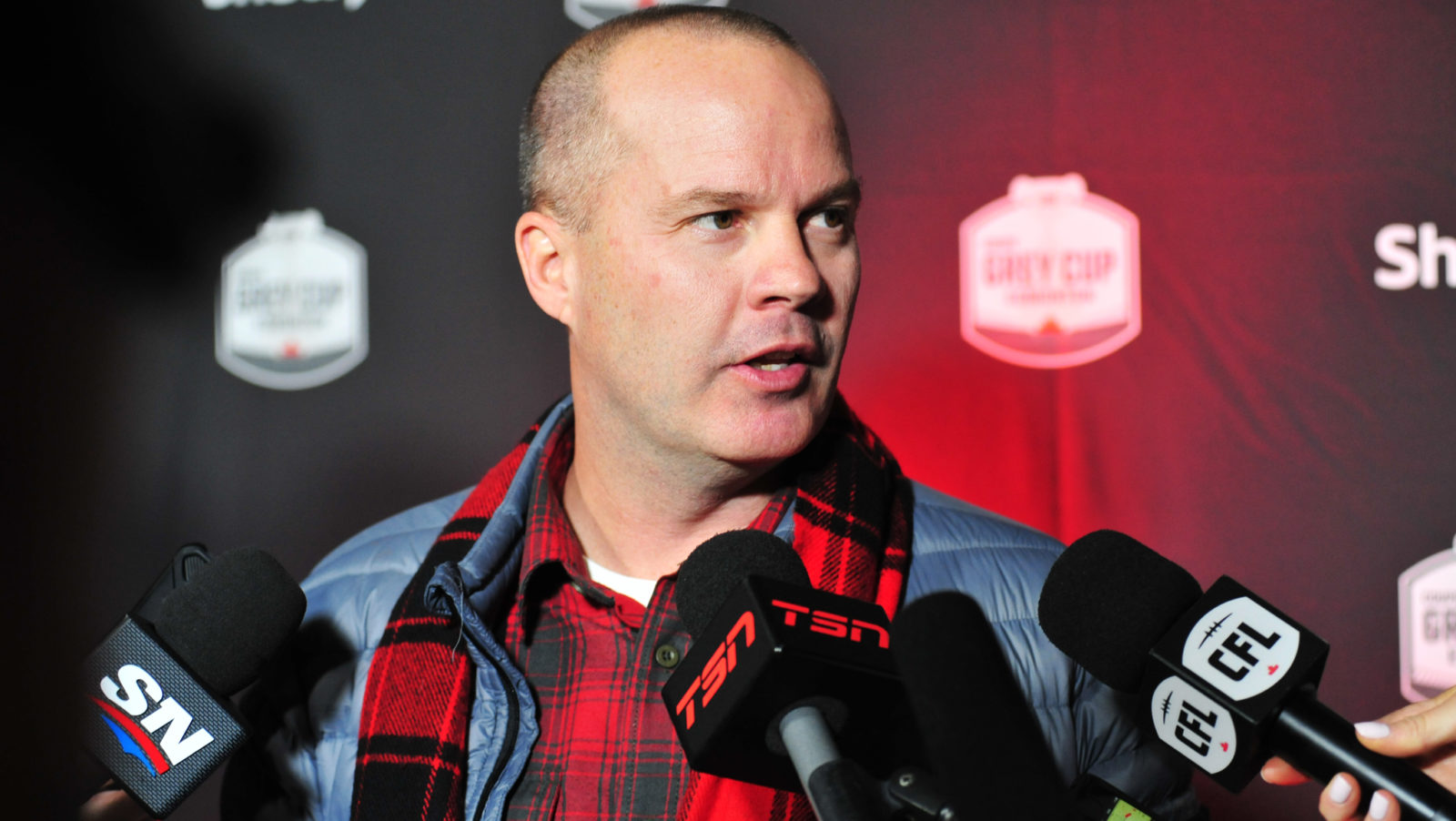 Landry: REDBLACKS arrive in Edmonton as a ‘different team’

The 2018 Grey Cup arrival of the Ottawa REDBLACKS came with a number of differences compared to their entrance of 2016. Back then, you had a beaming Henry Burris, striding into the terminal in a black Stetson, happy to playfully take on the part of bad guy, as well as the joyful underdog. This time? A stoic Trevor Harris in a REDBLACKS toque, game face already chiseled. All business.

But there was at least one thing that was the same, and that was the plaid shirt of Head Coach Rick Campbell, who apparently had on the same lumberjack-flavoured top he wore two years ago. A good luck charm?

“I didn’t actually think about that,” Campbell said. “I just wanted to rock the plaid.”

RELATED
» Head to Head: Who has the edge in the Grey Cup?
» Road to the Grey Cup: Ottawa REDBLACKS
» Cauz: Harris gets the record but the credit should be shared

Rocking the plaid will be the aim, this Sunday, as the Eastern champion REDBLACKS take on the Calgary Stampeders in the 106th Grey Cup presented by Shaw. As they were in 2016 against the Stampeders, the REDBLACKS will be the underdogs.

But if they are as disciplined, on Sunday, as they were in their answers about suspended defensive back Jonathan Rose, that would be a bonus, and very helpful in their quest to upset the Stamps once again.

Rose, who’s appealing his one game penalty for barreling over an official near the end of the second quarter of Ottawa’s Eastern Final win over Hamilton, was one of a couple of hot topics bounced around as Campbell and a select few players were scrummed inside a charter terminal at Edmonton International Airport, just after their arrival.

The other one was: How does this Ottawa team feel about being schooled by these same Stampeders during a couple of stinging losses, early in the season? More on that in a moment, but first, to the suspension of star cornerback Jonathan Rose.

Lips were sealed, if not bitten, as the head coach was quizzed, along with stars Trevor Harris, Brad Sinopoli and Antoine Pruneau.

“I don’t wanna speak too much about it because I don’t know too much of what the result’s gonna be,” said Campbell as the media gathered around tightly. “So I’m gonna let that whole process play out and actually learn more. Like I say, we’ve been on the plane for the last five hours.”

“I have no comment,” said Harris, his usual verbally economical self.

“We can’t say much on that ’til it kinda gets settled,” said Sinopoli. “We haven’t talked much about it.”

The only player to break the theme in the slightest was Pruneau, who answered in the affirmative when asked whether he thought Rose’s suspension was too harsh.

“Yeah, I think it was,” he said, offering not much more than that, other than a few positive words about his teammate.

While Campbell wouldn’t go further in wading into a suspension that may alter the Ottawa defensive mix in a big way come Sunday, he did allow that, generally speaking, a break in discipline is not something he’s fine with from any of his players; something he will no doubt be preaching as Grey Cup Week progresses.

“It’s real important that you stay out of that business and stay away from the chippiness,” he said, succinctly.

As for the foe this coming Sunday, Campbell wouldn’t take the bait on those two early season games, his REDBLACKS being handled by scores of 24-14, in Calgary, and 27-3, at home. Rather than those losses being a function of Ottawa shortcomings, Campbell said, they came in the face of pretty smooth opposition.

“I’ll give them full credit, they’re a good football team,” he said.

Harris, the star pivot who turned in a masterful performance in the Eastern Final, throwing six touchdowns against the Ticats, agreed with his coach’s assessment, but then offered a glimpse into the REDBLACKS’ growing confidence, forged in some late-season games where they performed so very well.

“They took it to us,” he said of the early season losses to Calgary.

“Offensively, we’ve gotta be better. Make sure that we’re doin’ a better job of  executing the way we have been lately. Obviously, they took it to us and they have a great defence.”

“I think we’re a different team in terms of our mindset,” Harris went on to say. “The growth we’ve had, our offence is better in terms of figuring out what we’re good at.”

Sinopoli, who set a record for Canadian receivers in 2018 with 116 receptions, echoed his quarterback’s optimism.

“We’re a lot different,” he said in sizing up November’s REDBLACKS in comparison to the version that lost those two games back in June and July. “That seems like an eternity (ago). Just throughout the season, you grow as a team, you learn to win in situations that are tough situations. We had a couple of pressure games with Hamilton.”

“I think we’ve evolved a lot since those games earlier in the season,” agreed Pruneau, the free safety who returned to action in the Eastern Final after missing more than a month of regular season action with a broken thumb.

The REDBLACKS, then, believe they have much more to offer than they did during those early season duds and because of that, are keen to continue their late season surge, with or without their suspended teammate.

“We’re fired up to be here, but not satisfied,” said Harris, shortly before his portion of the scrum ended.

Off he went into the Edmonton night, along with the rest of his mates, and the coach with his lucky plaid shirt, intent on getting to preparations for another possible championship upset.