Trevor Harris remembers walking out onto BMO Field in Toronto, a few hours before kickoff. He looked around at the expanded seating, felt the crispness in the air and told himself that one day, this would be for him.

Through an up and down 2016 season in Ottawa, Harris came out of it as the backup. Henry Burris had led the REDBLACKS to their second consecutive Grey Cup appearance and would get the chance to write the final pages of a storybook ending against his former team.

Then in warmups, his knee locked up.

Burris went to Harris and told him that he couldn’t walk and that he didn’t know what was going on. He told Harris that he needed to be ready.

For a good 15 to 30 minutes, that Grey Cup pregame took an unheard of turn and Harris was going to start. At some point toward the end of the national anthem, Burris joined his team on the field, resumed starting duties and of course wrote that storybook ending against Calgary.

“It was something else, that’s for sure,” Harris said on Wednesday in Edmonton, after his team’s first practice to go into the 106th Grey Cup presented by Shaw on Sunday.

“I remember going out and walking down to the field…just looking around and thinking I’d have to wait at least a calendar year for this opportunity and sure enough a couple of hours later I was told you’re going in.

“Actually, Greg (Ellingson) walked up to me in the locker room and said, ‘This is why we brought you here. We’ve got two great quarterbacks and we’re not going to miss a beat. Go in there and do your thing and we’ve got your back.’

“That gave me a lot of confidence that day. It was an up and down roller coaster-type of day but obviously it worked out well for us.”

It worked out, but that game could have been much rockier had Harris not handled what had to be a difficult moment as gracefully as he did.

“Not a care in the world, honestly,” REDBLACKS receiver Brad Sinopoli said of Harris’ reaction that night.

“Starting, playing in the Grey Cup is a dream scenario. But if you’re a good teammate…that’s the thing about bringing in good people here. Everyone’s a good person, a good teammate. It happened. Trevor didn’t sulk. He just went right back to, ‘OK my role now is support him, watch the defence when I’m on the sideline and do everything that they do on the sideline.’”

That year had been such a dynamic of Henry and I putting ourselves aside for the team that it almost felt normal, almost felt fitting that he’d been hurt,” Harris said. 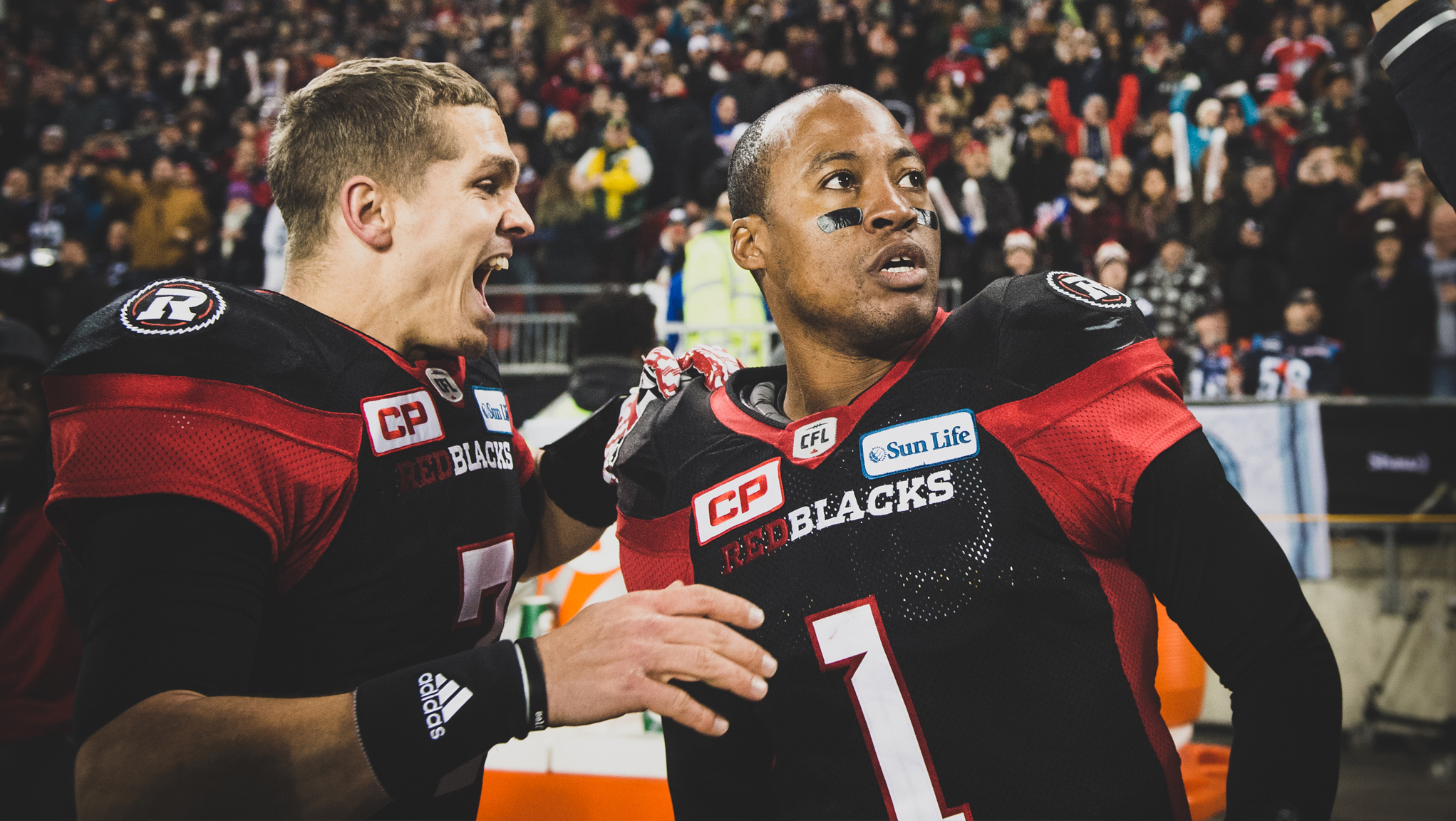 Trevor Harris celebrates and Henry Burris looks on in disbelief after winning the 104th Grey Cup presented by Shaw. Harris, for a brief moment, was to start the game after a pre-game injury to Burris (Johany Jutras/CFL.ca)

Almost two years to the day on Sunday, Harris will walk onto the field at Commonwealth Stadium and take in the surroundings again. There was a question in Rick Campbell’s media availability on Tuesday night, jokingly asking if Harris would start. There are no questions around him now. After backing up two CFL greats in Ricky Ray and Burris, Harris is a legitimate starter, breaking the 5,000-yard passing mark in 2018. He finally has his shot and finally can try to build the type of legacies that he saw as an understudy in his time in the CFL.

“When you’re in your backyard and you’re a little kid you don’t say, ‘Hey, we’re down five late in the exhibition game,’” Harris said of the opportunity in front of him this week.

“You’re in the big game. You put yourself in those situations and when you find yourself in that spot it’s surreal, but it’s really exciting. When it comes down to it, during the game outside of the media and when you can kind of narrow your focus in, it’s still football.”