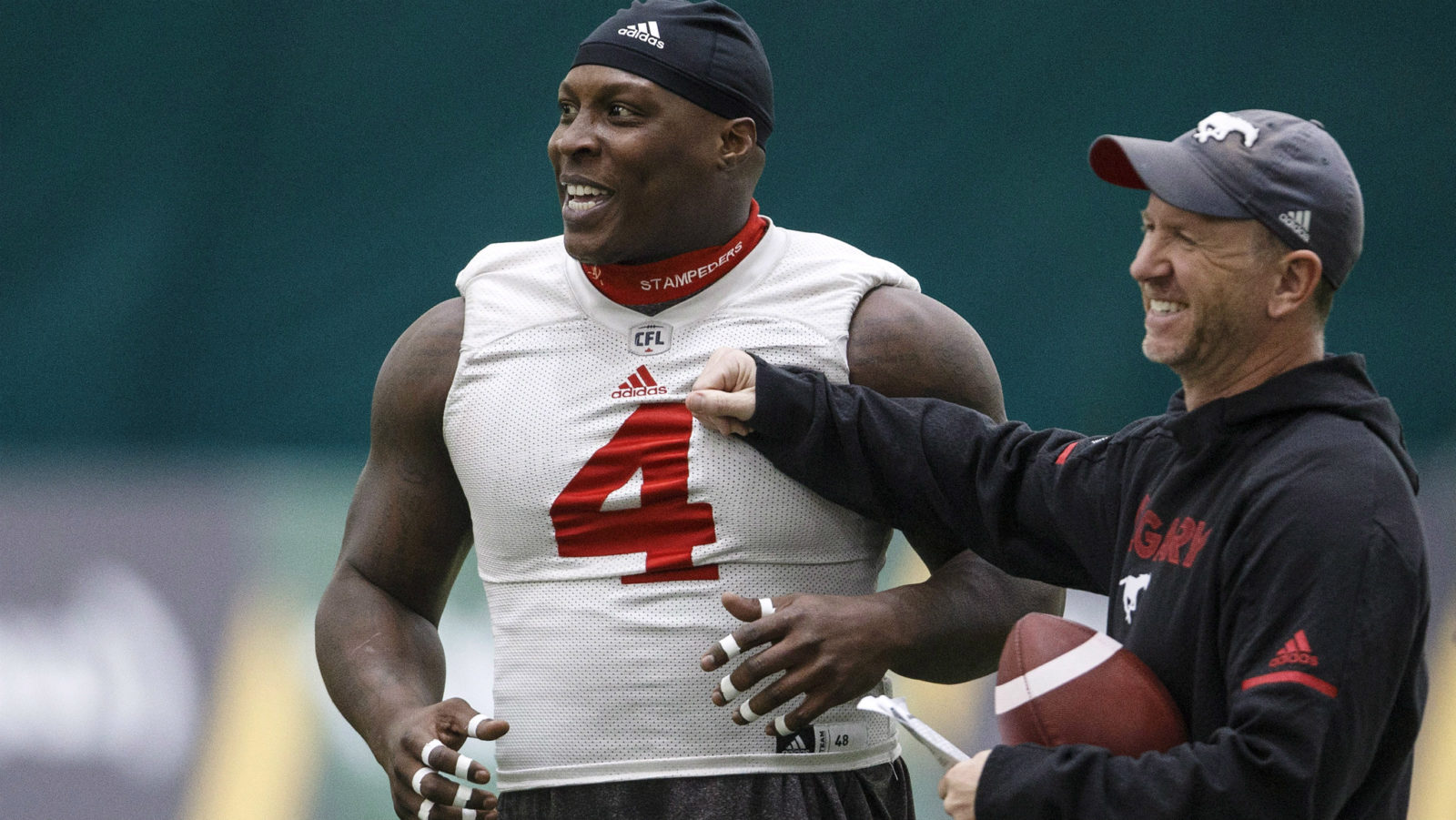 EDMONTON — In nature, animals that don’t adapt often go extinct. That’s why kangaroo rats in the desert get all the moisture they need from the seeds, or, some species of fish produce their own antifreeze proteins to survive the freezing waters surrounding Antarctica.

The Calgary Stampeders’ Micah Johnson played linebacker at college, but after being released by several NFL teams, he realized if he didn’t change positions his football career would be over.

That evolution has resulted in Johnson becoming one of the most feared defensive tackles in the CFL. The Stampeders are counting on his combination of size, power and speed to help them defeat the Ottawa REDBLACKS in Sunday’s 106th Grey Cup presented by Shaw.

» Head to Head: Who has the edge in the Grey Cup?
» Road to the Grey Cup: Calgary Stampeders
» O’Leary: Boisterous back endeared himself to teammates from Day 1

“I was kind of a big linebacker going out of style anyway,” Johnson explained after a Calgary practice at the Foote Field facility on the University of Alberta campus. “Just being cut as many times as I have been, I wanted to make a team.”

In 17 games this season Johnson had 14 sacks, 10 of them coming in the last seven games. His sack total is just one behind CFL leader Charleston Hughes of Saskatchewan. On the year the two-time CFL all-star totalled 28 tackles plus an interception.

His play earned Johnson Calgary’s nominee as the CFL’s Most Outstanding Defensive player. He also was awarded the Stampeders’ Presidents’ Ring, presented annually to the player who best demonstrates excellence on and off the field as voted by the players.

At six-foot-two and 278 pounds, there is no doubting Johnson’s size. He combines bull strength with a cat’s quickness. He can finesse he way past an offensive lineman or simply bowl them over.

“Micah Johnson is a running back in a D-lineman’s body,” said head coach Dave Dickenson.

While Dickenson appreciates Johnson’s athletic abilities, he loves the leadership he brings.

“The players respect him,” said Dickenson. “As a leader, I think he’s growing as a man. His performance is getting better and better.

“There are a lot of good defensive tackles in this football league, as good as any year I can remember. I think Micah has separated himself right at the top of that.”

Johnson played both linebacker and running back in high school. As a linebacker at the University of Kentucky, he had 57 solo tackles, 2.5 sacks and earned first-team All-SEC honours in his junior year.

After not being selected in the 2010 NFL draft, Johnson bounced around between the New York Giants, Miami, Kansas City and Cincinnati, all the time trying to earn a spot as a linebacker. It was when Calgary signed him as a free agent in May 2013, Johnson made the transition to defensive tackle.

“When a coach said this is where I think you’ll be a great player in this league . . . I just jumped at the opportunity,” said the 30-year-old native of Columbus, Ga.

“It wasn’t that hard of a transition for me. Being a linebacker, there is way more on your plate, a lot more to look at, a lot more to study. You have to get guys lined as well as yourself. D-line is actually kind of simple. You deal with the guy in front of you, that’s pretty much it.”

Johnson did have to learn new techniques and moves. His development was also slowed by injuries that limited him to 29 games over his first three years.

“That’s why it’s so fresh and so fun for me,” he said. “I’m still learning so much. I’m not like a guy that has been doing it since college.

“There is so much more I’m learning and there are so many things I can do better. It makes every day exciting.”

“He’s just a big ball of muscle wound up to just want to hit somebody,” said Klassen. “Micah is a great teammate, a great leader in the locker room.”

Ottawa rookie offensive lineman Mark Korte knows containing Johnson will be a key if the REDBLACKS hope to defeat the Stampeders.

“He’s a big, strong guy and he has a variety of techniques,” said Korte, who grew up in Spruce Grove, Alta., just outside of Edmonton. “He’s a talented player that can attack you in multiple ways.

“He’s got the strength to move guys around.”

Of all his skills, Johnson believes quickness is his best weapon.

“It just gives you a little bit of athleticism if you can be a quick guy in the interior and be explosive,” he said. “It’s a big-time athletic mismatch.”

Off the field, Johnson is a teddy bear, with a quick smile and booming laugh. When he steps between the white lines, he transforms into a grizzly.

“He’s a good football player first, very passionate as you can probably see on the field sometimes,” said Dickenson. “He wants to do well and when it’s not going well, that’s when sometimes he bubbles over a little bit.”

It’s that transition from Dr. Jekyll to Mr. Hyde which makes Johnson the player he is.

“When we get on the field, especially on game day, a switch comes on,” he said. “I feel like it has to come on. You have to go out there and attack the game with a certain type of passion. I really try to bring that every game.”