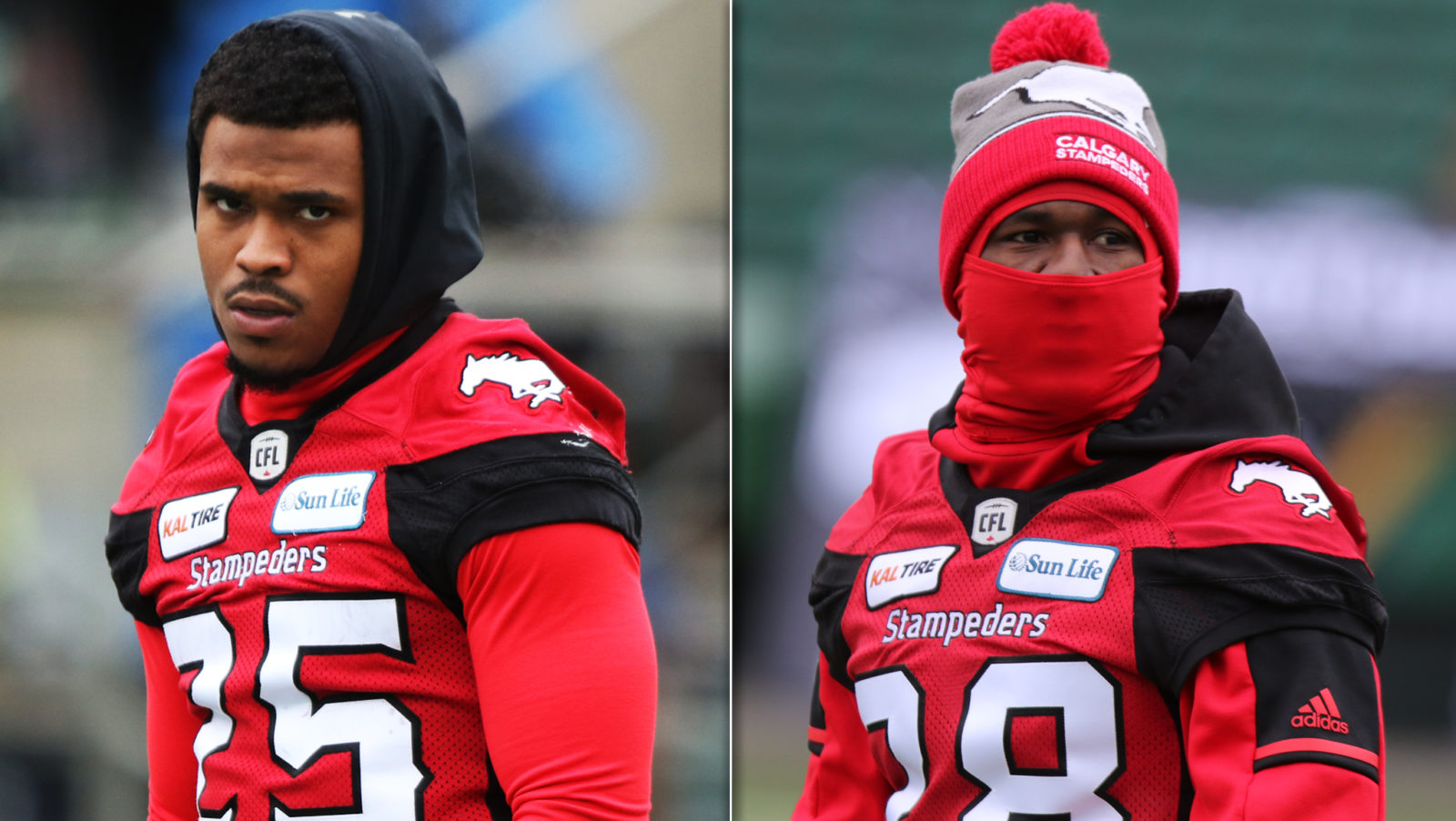 They are both from California and each have a passion for football, but after that the Calgary Stampeders’ Brandon Smith and Don Jackson bring a very different demeanour into Sunday’s 106th Grey Cup presented by Shaw.

Smith, the veteran defensive halfback who will appear in his sixth Grey Cup, is quiet, efficient and always remains in control. Jackson, the rookie running back with the gold teeth, is loud, brash and sometimes battles to stay just on the right side of crazy.

“They are at different ends of the spectrum,” said strong side linebacker Jamar Wall. “They go about it a different way but at the end of the day it’s all the same outcome.

“They want to win, they want to do what’s best for the team and they both bring it in a certain way and get it done.”

» Stamps’ ‘silent beast’ not looking for personal accolades
» Josh Bell learning as he goes in transition from player to coach
» Fuel to the Fire: Daniels finding extra motivation for first championship
» Just In Time: Addition of Matthews exactly what Stampeders needed

The 34-year-old Smith compensates for the half step he might have lost with experience and an understanding of the game. If you don’t notice him Sunday against the Ottawa REDBLACKS he’s probably doing his job.

“Am I still as fast as I once was at 22 and 23? Absolutely not,” said Smith, who had 56 tackles, one sack and three fumbles in 17 games this year. “I’m still able to match up with good speed against my opponents.

“But the experience does give me a leg up on some of the younger guys, what routes to expect at certain times. It allows me to be in better position.”

Smith prefers to let his actions speak for him.

“Some guys are more outspoken to get them going,” said the 11-year veteran from Oakland. “I like to conserve my energy because I have to chase guys around.

“I’ve played quite a few games. I noticed once I get to talking and getting emotionally involved, it drains me, so I can’t go out and do my job productively.”

While Smith plays with the subtility of a string quartet, Jackson is acid rock. He runs with violence, always looking for contact.

“I play running back,” said Jackson. “Contact is the game. I definitely thrive on it.”

“With Don, you’ve got to make sure his emotions don’t get too high,” said head coach Dave Dickenson. “He’s a very intense person. You have to make sure to calm him down a hair and just make sure he’s doing his job.”

Jackson understands the importance of staying in his lane and not swerving too far into being outrageous.

“Ride that line between being over the edge, wild and crazy, and being subtle and honed into myself,” he said. “That’s what I try my best to do.

Smith played his college football at Sacramento State. He joined the Stampeders in 2008 and helped Calgary win the Grey Cup.

Smith missed the entire 2009 season with a knee injury suffered in the pre-season. He was a West Division All-Star in 2014 when he won his second Grey Cup.

“His skill set, what he possesses, you can’t find it in a lot of guys,” said Joshua Bell, Calgary’s defensive backs coach. “He’ll hit anything. If they have the ball, if they don’t have the horse on their helmet, they will get thumped by Brandon Smith.

“A lot of the defensive backs, especially with our new football rules, they are soft. Brandon Smith is not that. He knows exactly what he’s supposed to do. He communicates better than a lot of other guys.”

Dickenson said Smith’s quiet leadership and experience will be a factor against Ottawa.

“Having veteran leadership will be big to calm people down and get them focused on what is important.”

Jackson, who was born in Sacramento, played his college football at Nevada where he rushed for 1,082 yards and eight touchdowns in his final season. Overlooked in the 2016 NFL draft, he signed with Green Bay and played three games before being released.

The Stamps signed Jackson in May. He scored a touchdown in his first CFL appearance against Toronto then rushed for 123 yards on nine carries in his second game against Toronto.

Jackson said Smith might not be a big talker, but he is helpful with advice.

“Smithy has been doing this for a long time,” said Jackson. “He has a lot of knowledge of the game. He stays on everybody in the room.

“When my ball security is lacking, he’s the guy telling me to tighten up.”

Jackson chuckled when asked about playing in six Grey Cups.

“I can’t think about six,” Jackson said. “I’ve just got to focus on one right now.”

Smith’s advice to Jackson for Sunday’s game is be cool, stay focused.

“We try to talk about not letting the Grey Cup be bigger than the actual game,” he said. “It’s just another game. It’s the last game of the year, it’s the championship game, but we think about all the distractions that come along, it can get bigger than what the game should be.

“The main thing is just go out there and do the same procedures that you do before another game. It’s the biggest game because it’s the next game.”