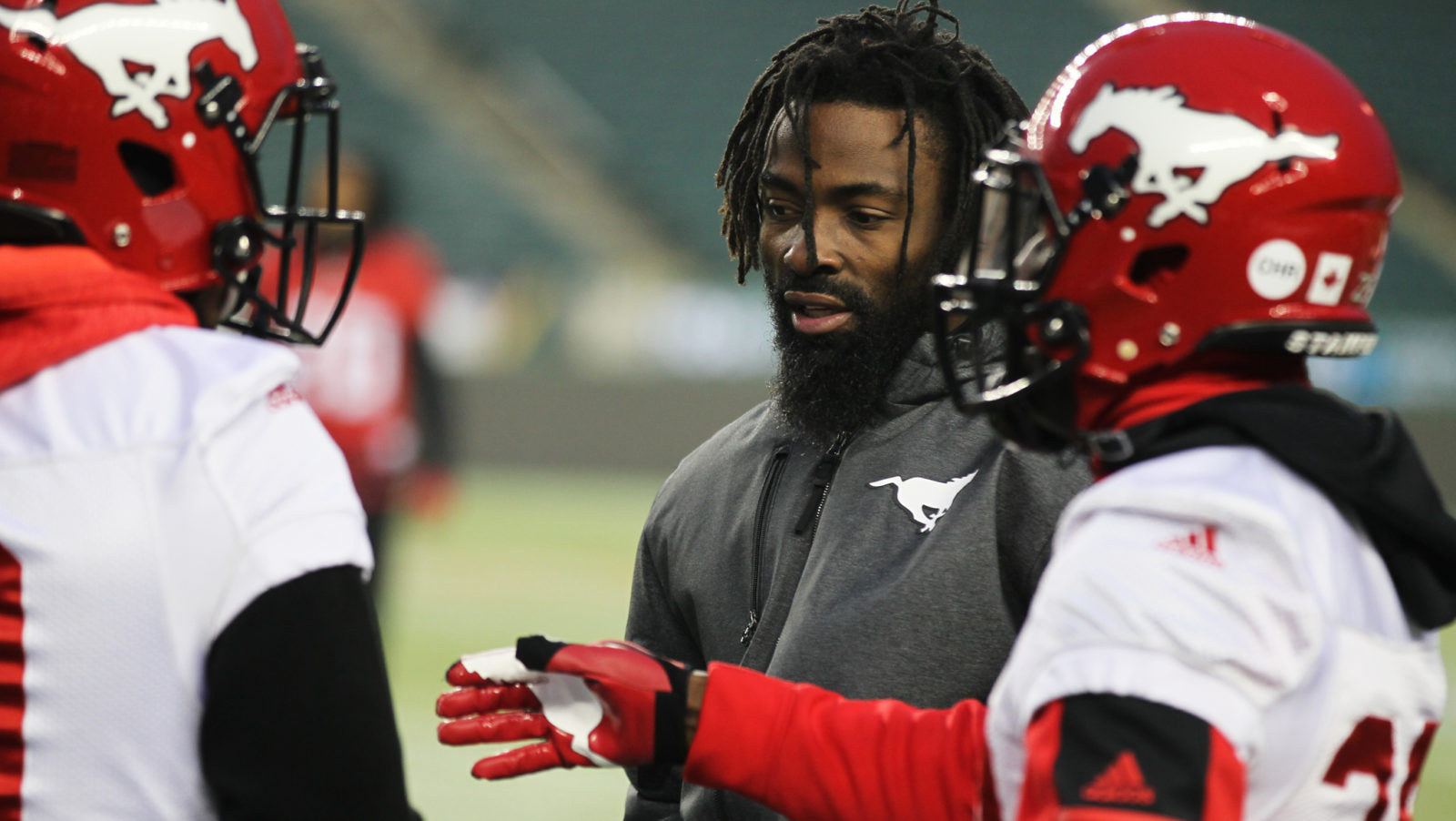 As a player Joshua Bell knew no fear.

As a free safety with the Calgary Stampeders there was no offensive scheme Bell couldn’t unravel, no player he wouldn’t lower his head and deliver a blow.

But in his first season as the Stampeders defensive backs coach Bell found himself on the losing end of a battle with technology.

“That’s been the hardest thing ever, the computer work,” Bell said with a chuckle. “Golly, it took me four or five hours to put three pages into a scouting report.

» Stamps’ ‘silent beast’ not looking for personal accolades
» Berg vs. Ferg Are the Stamps one win away from a dynasty?
» Fuel to the Fire: Daniels finding extra motivation for first championship
» Just In Time: Addition of Matthews exactly what Stampeders needed

“He’s got better but figured out? No,” said Wall. “I think there might have been a mistake on the power point today.

“He’s getting there. Baby steps.”

What ever problems Bell has dealing with Excel he more than compensates with the experience he brings to the Stampeder coaching staff as they prepare to face the Ottawa REDBLACKS in Sunday’s 106th Grey Cup presented by Shaw.

“I still have the same mentally as a coach as I did as a player,” said Bell. “I expect nobody to make a mistake. Don’t make mental mistakes.”

The Stampeders finished first in the West with a 13-5 record. The Calgary defence led the league in both fewest points allowed (362) and touchdowns given up (33) plus forced a CFL-high 49 turnovers.

Bell finds the same satisfaction from winning as coach as he did a player.

“It makes you feel good,” he said. “You just live through other guys on the field. You still get the gratification because we all did that together.”

As a player, Bell would celebrate knocking down a pass or moving up to stop a run. As a coach, he takes pride in shaping an effective defensive scheme then communicating it to his players.

“The gratification comes in the guys actually executing the game plan,” said the 33-year-old Los Angeles native. “My job is to relate information.

“If you can tell the guys are all on the same page, they all see what is happening and they are attacking, then you stick your chest out and (say) ‘I did my job.’”

Bell spent four years playing for the Stampeders and two with the BC Lions. In 86 career games he had 206 tackles, one sack and five interceptions.

Bell was a West Division All-Star in 2015 and 2017 and helped the Stampeders win the 2014 Grey Cup. He also was a member of the Stampeder teams that lost the last two Grey Cups to Ottawa and Toronto.

One concern Bell had when moving from the field to the sidelines was how his former teammates would react to him.

“I was leery of that point,” he said. “As a teammate I spoke up and we had conversations back and fourth.

Stampeder cornerback Ciante Evans said Bell’s credentials as a player gave him crediability as a coach.

“I knew what to expect from him,” said Evans, who had 30 tackles, two interceptions and a forced fumble this year. “I know what he’s like, how he was able to see defences.

“I was able to listen to him when he was a player. I got to learn from him as a player, now he’s a coach.”

Veteran half back Brandon Smith, who will play in his sixth Grey Cup Sunday, said the transition has been seamless.

“Even when he was playing, he was doing a lot of coaching,” said Smith. “I knew it wouldn’t be a hard transition because he’s a very knowledgeable player.

“When he transformed to be a coach, he still has that knowledge.”

Head coach Dave Dickenson was impressed with the way Bell dealt with adversity. Calgary faced a rash of injuries and battled through a three-game losing skid near the end of the season.

“He has a lot of learning still to do,” said Dickerson. “I told him it’s easy when it’s doing well. You can really decide what type of coach you are when it’s not going your way.

“We’ve had a few games where that’s happened. He put his nose to the grindstone, found a different way to approach the guys.”

During his playing career Bell laid the groundwork to be a coach. While at attending Baylor University he volunteered to coach the track team.

During the CFL off-season he would work with high school football teams.

“I’ve learned to temper myself as a coach, even though I have been a player,” he said.

Down the road, Bell would like to become a defensive coordinator then a head coach.

“That’s the plan,” he said. “Once you start, who want to be at the bottom? You always want to climb up.”

Bell has experienced the heartbreak of losing back-to-back Grey Cups the Stampeders were favoured to win. A win Sunday would ease some of the pain from those losses.

“To win it all . . . it will still have a sweet feeling. It doesn’t negate you lost the past two, but it does symbolize you won this one and you got it right.”