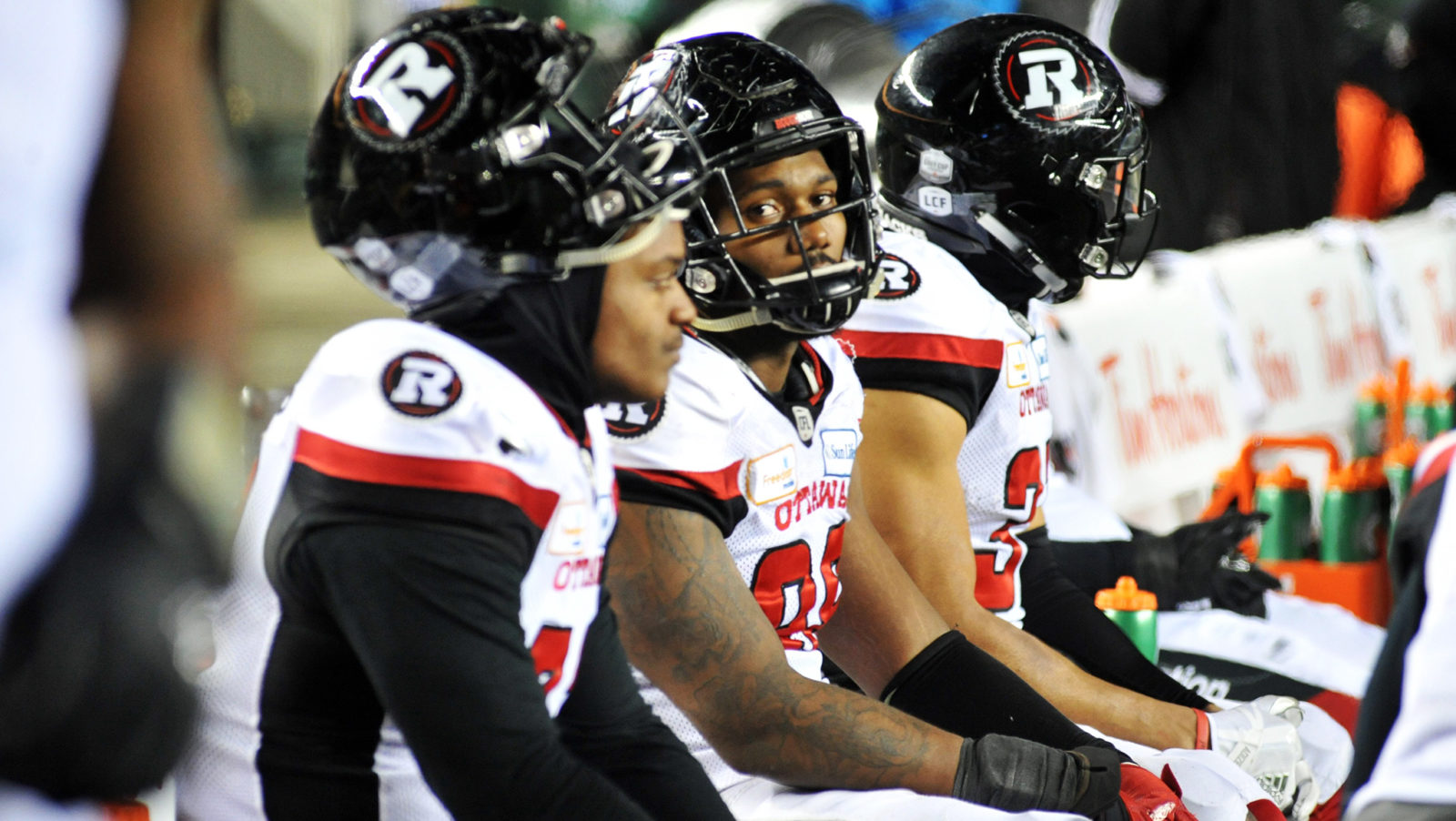 Regrets, they had a few. And, no, not too few to mention.

The Ottawa REDBLACKS were quick to credit their opposition in the aftermath of their loss in the 106th Grey Cup presented by Shaw, but it is certainly true that mistakes they made on the way to a 27-16 loss to the Calgary Stampeders also played a large role.

Some of the mistakes led to Calgary scores, while others sucked away any momentum that had just been gained by the REDBLACKS.

The evening began with Greg Ellingson dropping a sure strike for quarterback Trevor Harris, meaning the REDBLACKS suffered a two-and-out on their first possession.

That’s not what you’d call a usual occurrence, an Ellingson drop. A harbinger of what was to come for Ottawa. Not from Ellingson, specifically, who came sensationally close to making a tremendous touchdown catch that would have changed the complexion of the game in the fourth quarter. There were drive killers and back breakers all over the field for the REDBLACKS, particularly in the first half.

Collectively, they altered the game immeasurably. The REDBLACKS may not have beaten themselves, exactly, but they did make things much more difficult in endeavouring to win.

Quarterback Trevor Harris was picked off during the first quarter of a scoreless draw, moments after Ottawa defensive back Jonathan Rose had intercepted Calgary’s Bo Levi Mitchell in the Ottawa end zone to snuff a Calgary salvo. The Stamps turned Harris’ pick into a major and an early lead.

After defensive back Sherrod Baltimore pilfered a Mitchell pass in the second quarter, the ensuing Ottawa drive was ended with a William Powell fumble. The REDBLACKS were in chip shot field goal range at the time.

Rose dropped what looked like a gifted interception during the second quarter, one that may have seen him race the length of the field for a major had he nabbed it.

Then came the real gut punch, a punt return leak that saw Calgary returner Terry Williams score a major on a 97-yard return with just seconds remaining in the half. That turned a 14-11 game into a 21-11 game in a flash.

“That was a hell of a play,” said Ottawa linebacker Kyries Hebert, refusing to buy into the idea that the REDBLACKS might have sabotaged themselves on that and some other plays. “The footing was bad, but he was able to keep his balance. Hats off to him and their entire organization. They’re a good team. That’s the reason they’ve been here three years in a row.”

Did the REDBLACKS bless the Stamps with too many gifts? 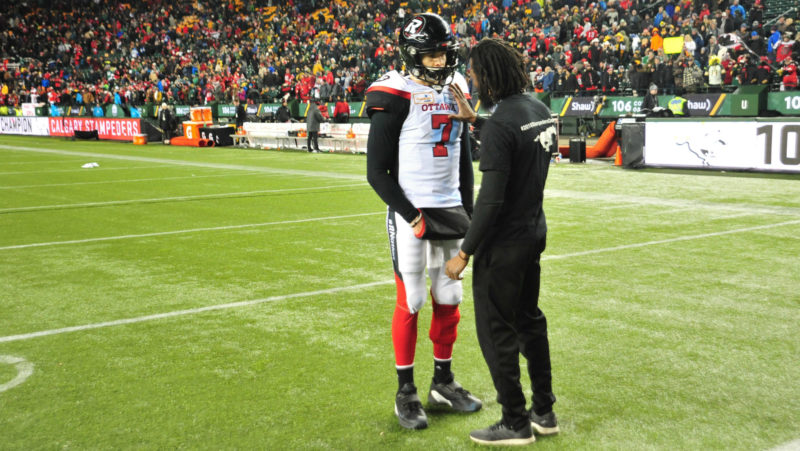 Trevor Harris gets consoled by a teammate following the REDBLACKS’ 27-16 loss in the 106th Grey Cup. (Walter Tychnowicz, CFL.ca)

“The punt return before the half was big,” said Diontae Spencer, of the big swing in momentum. Spencer would, unfortunately, provide another momentum boost for the Stampeders later in the game.

“Pretty much a defensive game all the way through, and then a few explosive plays happened,” said Ottawa defensive back Rico Murray. “The advantage went to Calgary early and then we had to play from behind.”

“The thing about Calgary is they don’t beat themselves,” said Ellingson, as he stood in a quiet locker room, moments after the game was over. “They played better than us.”

The REDBLACKS were certainly bemoaning the fact that they commited six turnovers during the game, although two of the three interceptions given up by Harris came late in the game, with Ottawa pressing hard to make something happen.

That is precisely what happened on Spencer’s punt return, early in the fourth quarter, just after the Ottawa defence had critically stopped the Calgary offence, in a ten-point game. In looking to get the corner, Spencer had the ball hit his knee as he was being disrupted by Calgary tackler Riley Jones, and it popped out. Calgary recovered and kicked a field goal to stretch their lead.

“Gotta hang on to the ball no matter what,” said Spencer, offering no excuses.

If the Ottawa offence and special teams stubbed their toes on a number of occasions throughout the night, the defence was mostly the lifesaver that kept hopes afloat.

Still, Murray exhibited some regret that his unit couldn’t get the ball back for the offence just a few more times.

“We were hoping that, as a defence, that we coulda gave our offence a few more extra possessions,” he said.

“You can’t go back and change it,” said Hebert. “They made the plays. We were close on some. We gave ourselves a chance.”

“I’m proud of our guys,” he added. “Offence, defence, special teams.
Throughout the season, the guys fought.”

That was certainly something that echoed throughout the Ottawa locker room, along with the sound of a consoling beer can being opened now and again. There was still the sting of a loss hanging fresh in the air, but there was at least some room for underlying pride to leak out.

“We got a close bunch here,” said Murray. “There’s no regrets. Everybody played their hearts out, so I’m just proud of our guys.”

“Everybody really came together towards the end of the year,” added Ellingson. “We created an identity for ourselves. I’d be proud to work with these guys next year and any year after that.”

That was an overriding theme for these REDBLACKS, happy to have gone into battle with each other, hopeful that a great many of them will be back in 2019 to pick up the challenge again.

Underneath, at least a little regret for a game that might have gone another way entirely, if not for the moments that turned things in Calgary’s favour.

“We feel like we left a lotta plays on the field,” said Spencer. “Credit to those guys, man. They’re a great team but it was a lot of plays that we left on the field.”