Dickenson returns to the elusive stage 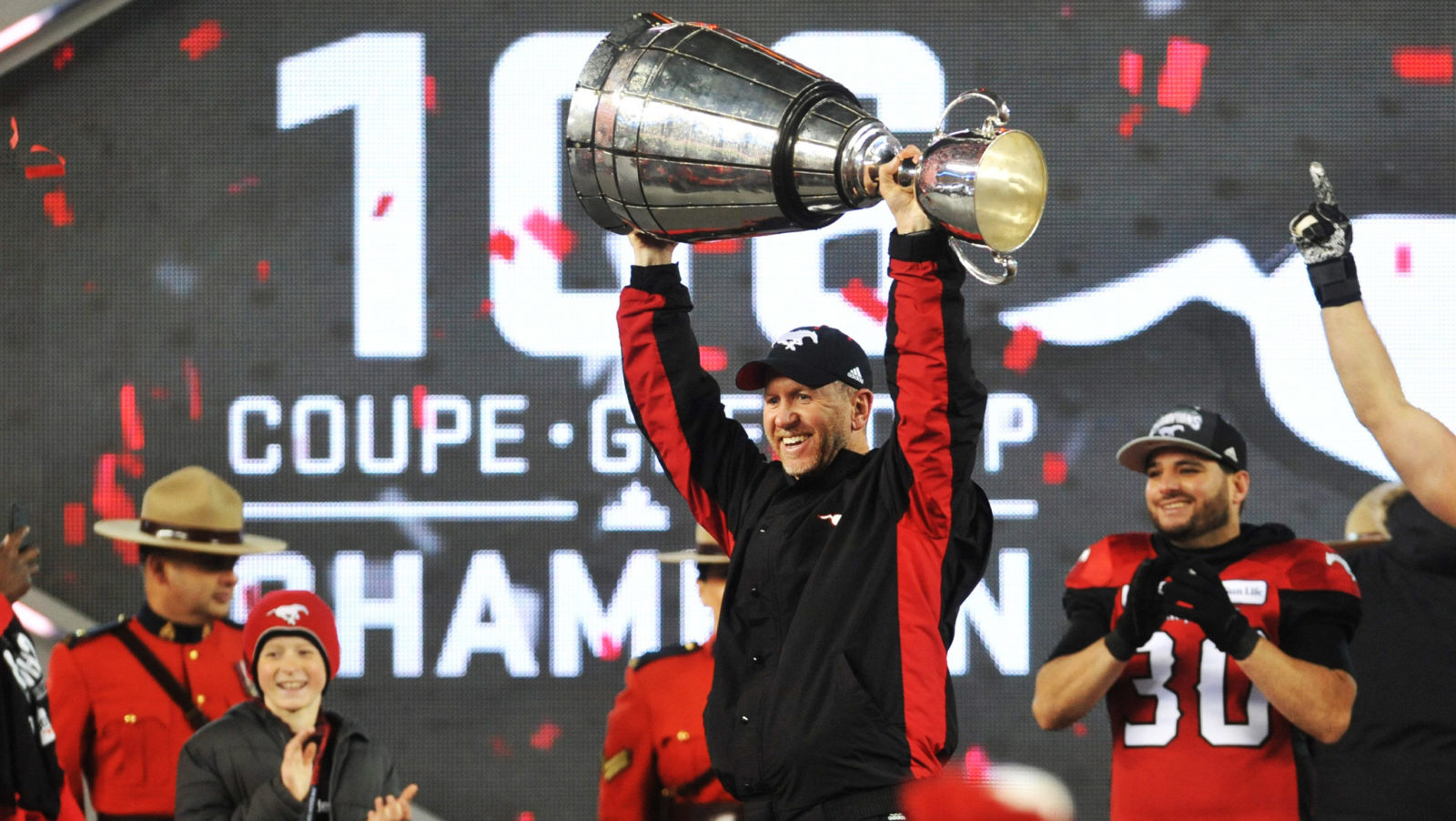 Dickenson returns to the elusive stage

The Calgary Stampeders were given some down time Saturday night, a chance to relax and unwind from their intensive preparations for the 106th Grey Cup presented by Shaw.

Quarterback Bo Levi Mitchell was walking around the team’s hotel when he stuck his head into head coach Dave Dickenson’s room. Mitchell wasn’t surprised to see Dickenson working on the game plan by himself, making changes, finetuning.

“Dave is not talked about enough in the right way,” said Mitchell. “That’s the greatest coach I’ve ever been around.”

When the final seconds ticked off the clock in the Stampeders’ 27-16 win over the Ottawa REDBLACKS in Sunday’s CFL championship Dickenson ran onto the field wearing a big white cowboy hat. After suffering painful, back-to-back losses Dickenson had finally taken his team to another level.

“You want to see the view from the top,” said Dickenson, his young son Cooper sitting beside him. “We couldn’t get it done the last two years.

“As a starting quarterback, you just don’t feel right unless you can win one (championship). I don’t think my life would have been the same without a head coach title as well.”

During his 20-year CFL career, nine as a player, Dickenson has participated in nine Grey Cups. He won three as a player, but only once as a starter in 2006 with the BC Lions. He was offensive coordinator with the Stampeders when they won the 2014 Grey Cup against Hamilton.

In his first year as a head coach in 2016, Dickenson was named coach of the year after directing Calgary to a 15-2-1 record. Taking home the Grey Cup looked like a formality until the Stampeders were ambushed 39-33 in overtime by Ottawa in Henry Burris’s last hurrah.

The Stampeders regrouped and finished 13-4-1 last year and had retribution on their mind when they faced a 9-9 Toronto Argonaut team. The Stampeders could almost taste the champagne, but things went flat after a late fumble snatched defeat from the jaws of victory in a 27-24 loss.

Dickenson didn’t want to get labelled as a good regular season coach that couldn’t win the big game.

“You want to make sure you give your guys a chance,” said Dickenson. “Players win the championships. I really believe that. I believed it more as a player.”

When the Stampeders finally hoisted the trophy that had eluded them the last two years the players danced for joy. They were happy for themselves and thrilled to finally win for their coach.

“I’m proud of coach Dickey,” said receiver Juwan Brescacin. “He was probably facing heat, losing it two years (in a row), but to come out and get that monkey off his back, and that monkey off our back, it’s an incredible feeling.”

“Realistically he can get fired just like a player can get fired,” said Wall. “It’s great for everybody but he can breathe a little easier.”

During the season, and in the days leading up to Sunday’s final, Dickenson said the Stampeders weren’t dwelling on the past and were focused on the present. Privately, the two defeats ate away at him like bad coffee on an empty stomach.

“You look at it, what can we do different, how can we get over the hurdle?” said the 45-year-old. “We didn’t want to answer question after question about that.

“To do it in 2018 with this group, a lot of people doubted us. We had a lot of talented people. Somethings talent isn’t enough. I’m not sure this team was as talented as the last two year. We were very tight, and we just got the job done.”

Mitchell, who was named Sunday’s MVP after taking league Most Outstanding Player honours earlier in the week, said he and Dickenson can be oil and water sometimes.

“Me and Dave butt heads a lot,” said Mitchell, who completed 24 of 36 passes for 253 yards, two touchdowns and a pair of interceptions against the REDBLACKS. “Through the entire season, we argued a lot.

“We butt heads a lot because we are both perfectionists, we’re both very intelligent when it comes to this game. He’s been doing it for a very long time. He wants to win more than anybody.”
The Stampeders overcame a late-season three-game losing streak to finish first in the West with a 13-5 record. They then defeated Winnipeg 22-14 in the West Final.

Dickenson said the win helped removed a cloud of doubt from the team. He also hopes it proves to be a boost to a city battling an economic downturn.

“It’s been a tough the last few years,” he said. “We needed it, we needed it as an organization, as a city.

“We are down a little bit in Calgary now and we are looking to build something and show people we are proud to be from Calgary.”