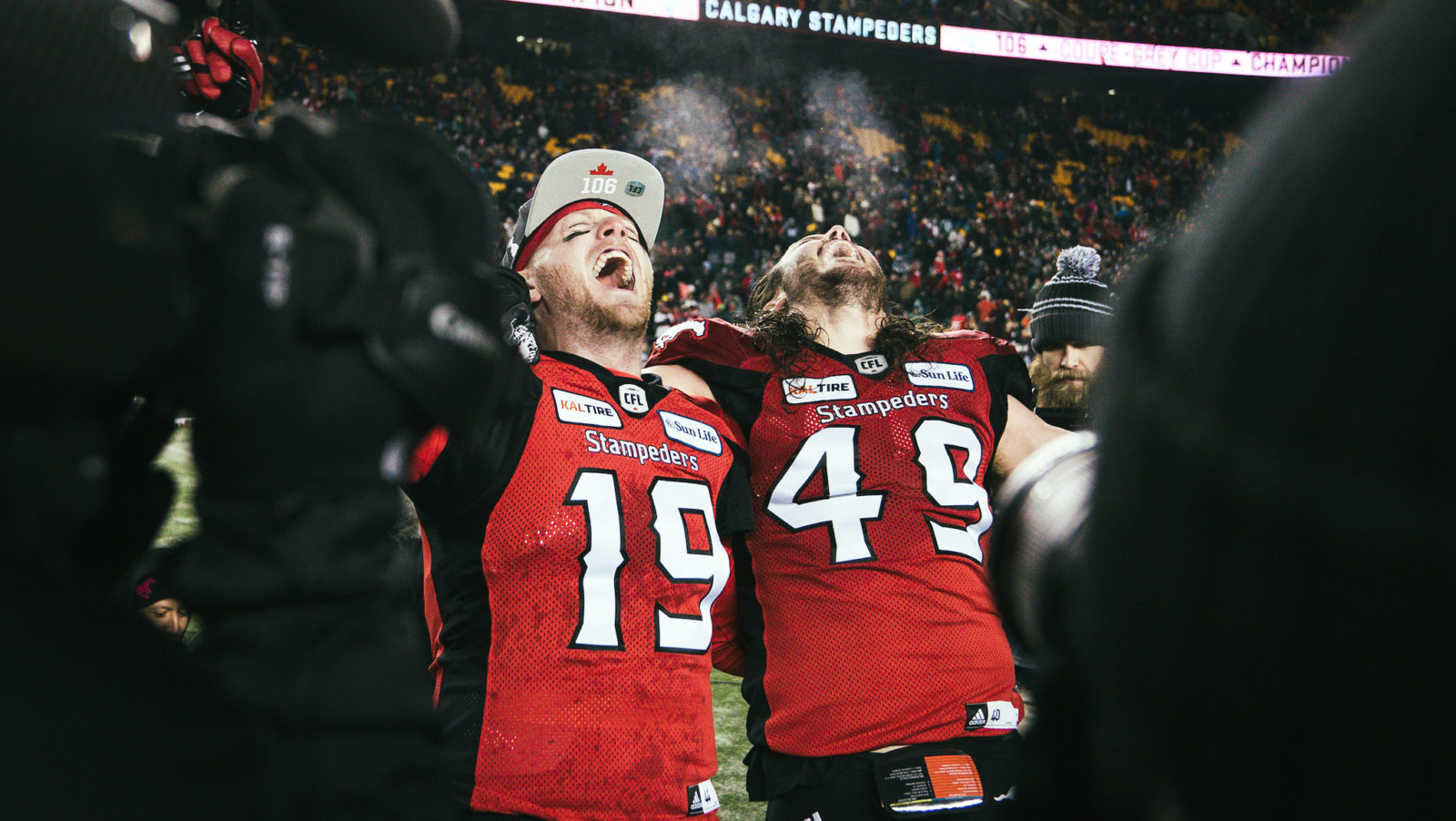 They came looking for him, like little hammers patiently chipping away at a rock, waiting for it to break open.

There was the bug that worked its way through Bo Levi Mitchell this week, a virus that aimed to hobble this year’s Most Outstanding Player, leaving him in his words with it, “coming out of both ends the entire week.”

There was the interception he threw on the ninth play of the game, a dart to the end zone snagged by Jonathan Rose. There was another pick late in the second quarter that could have given the Ottawa REDBLACKS life. 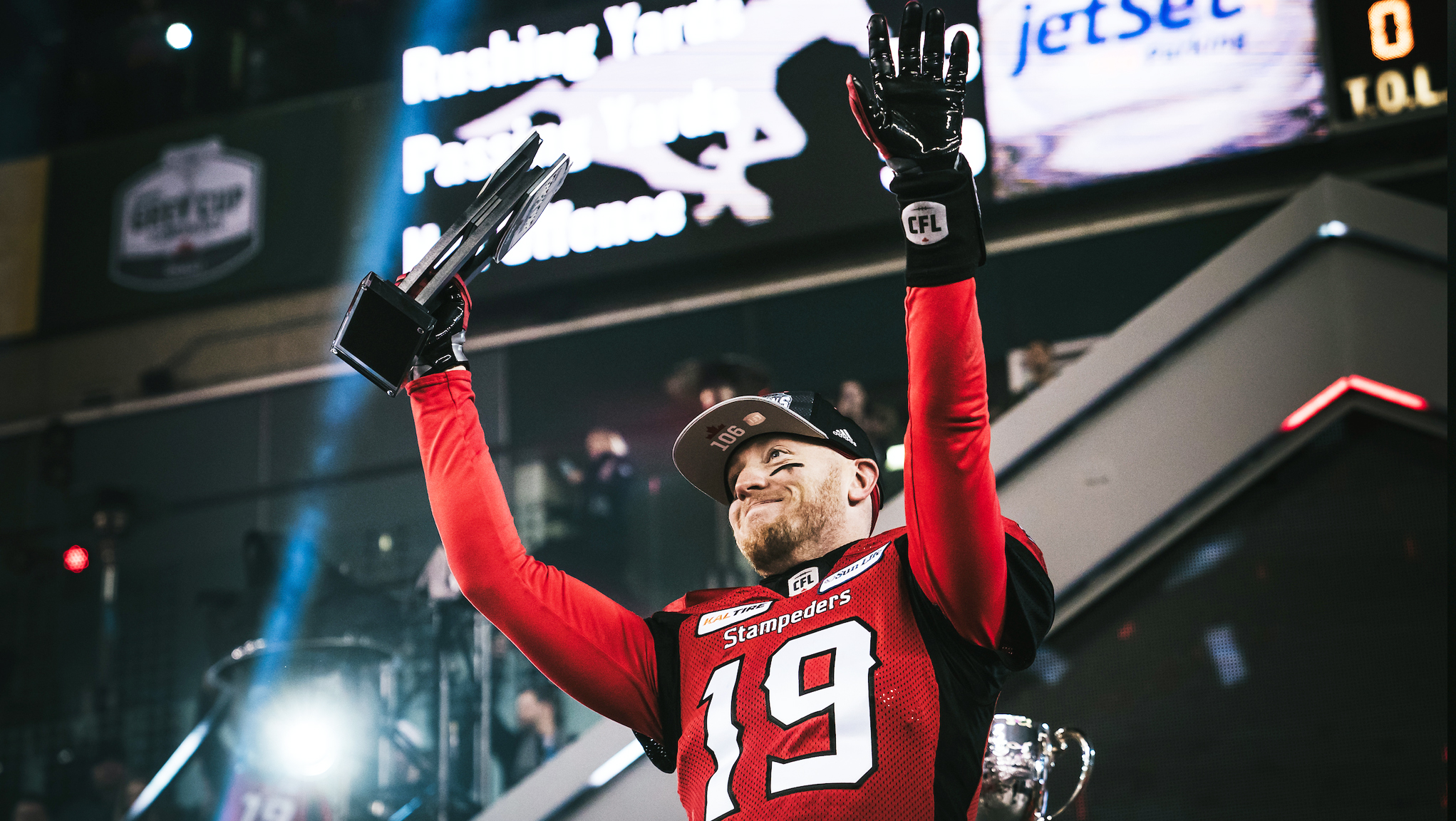 Stampeders QB Bo Levi Mitchell celebrates his second MVP nod in the Grey Cup becoming only the seventh in history to do it twice (Johany Jutras/CFL.ca).

There was the weight of three consecutive Grey Cup trips, the previous two leaving him empty-handed and heartbroken. He spoke this week of dreaming over the last two years of those games, of feeling the rush of the win in his sleep. He’s known all year that he and his teammates will explore their options fully in free agency this year and that Sunday, in the 106th Grey Cup presented by Shaw, he had to get this one. He had to make it right.

If he were the type to rattle easily, Mitchell might have cracked and he could have had a different outcome. The confetti that fell in front of 55,819 fans at Commonwealth Stadium might have been the same colour, but it wouldn’t have been Mitchell and his Calgary teammates on that stage.

“It feels surreal. I know we talked that way, that it didn’t mean anything, because we couldn’t make the game bigger than it was,” Mitchell said, reeking of cigar smoke and soaked in champagne.

It wasn’t a pretty game, but Mitchell and the Stamps made less mistakes. He was 24-36 for 253 yards with two touchdowns to nullify his two interceptions.

“I think the guys that were on those two teams, or even on the team last year, the emotions as the (final) 30-second mark hit, you really started to understand it wasn’t about redemption against anyone else or against the league or against fans or anything like that,” Mitchell said.

“It felt like as an organization we’ve been on top too much not to finish the job for them. They’ve given us everything as an organization. The coaches, everybody. It just feels amazing to get it done for the city of Calgary.”

As the Stamps ramped up their party in their rival Esks’ locker room, Kamar Jorden stood on the periphery, a bottle of champagne in his hand, his championship hat on backwards. The team’s leading receiver, he was lost for the season on Labour Day with a knee injury. The unfortunate face of the game-changing fumble in last year’s Grey Cup, he was halfway down the road to the goals he was chasing.

“It’s about being a leader. An easy thing to do for anybody is to leave and start fresh. It’s hard to be on a team where every CFL fan is saying we choked. Choke this, choke that. You guys can’t win at the end and all that stuff.

Calgary never trailed on Sunday. Their largest lead was 13, their smallest three points, but they had their vulnerable moments. There were Mitchell’s two interceptions and there were Outstanding Canadian Player Lamar Durant’s two early drops before he broke through with a touchdown. There was the threat of the field, which was frozen and slippery, an X-factor that neither side wanted to be impacted by.

“I had the two drops and Bo had the two interceptions and he’s one of the best quarterbacks to ever play in this league,” Durant said. “He showed who he is, he’s a champion. In practice, we always talk about that. He never lets anything rattle him. He really does have ice in his veins.”

“Bo is great, man. I think one thing about Bo is he’s the ultimate leader,” Jorden said.

“If things are going down with the team he’s going to let everybody know to keep their cool, to stay focused. And he’s going to make plays. He’s not just going to talk the talk. He’s going to walk the walk.”

His 2-2 record as a starter in Grey Cup games changes the conversation around him and adds to his legacy. The choke talk will die down and his dominance over the league through the past seven years will shine through. The smack talkers and rapid-fire fingers on Twitter will always say otherwise, but winning is hard. You’re not going to do it every year just because you’re the best team. Anthony Calvillo’s greatness in the CFL is unquestioned and he won three out of seven Grey Cups he played in. At 28, Mitchell has a ways to go to get to that level of conversation, but he’s headed in the right direction.

He’ll wake up on Monday morning and the rest of them after through this off-season and he won’t have to worry. The dreams aren’t nightmares anymore and when he wakes up, reality won’t crush him.