Steinberg’s MMQB: Are the Stamps ready to ride into the sunset? 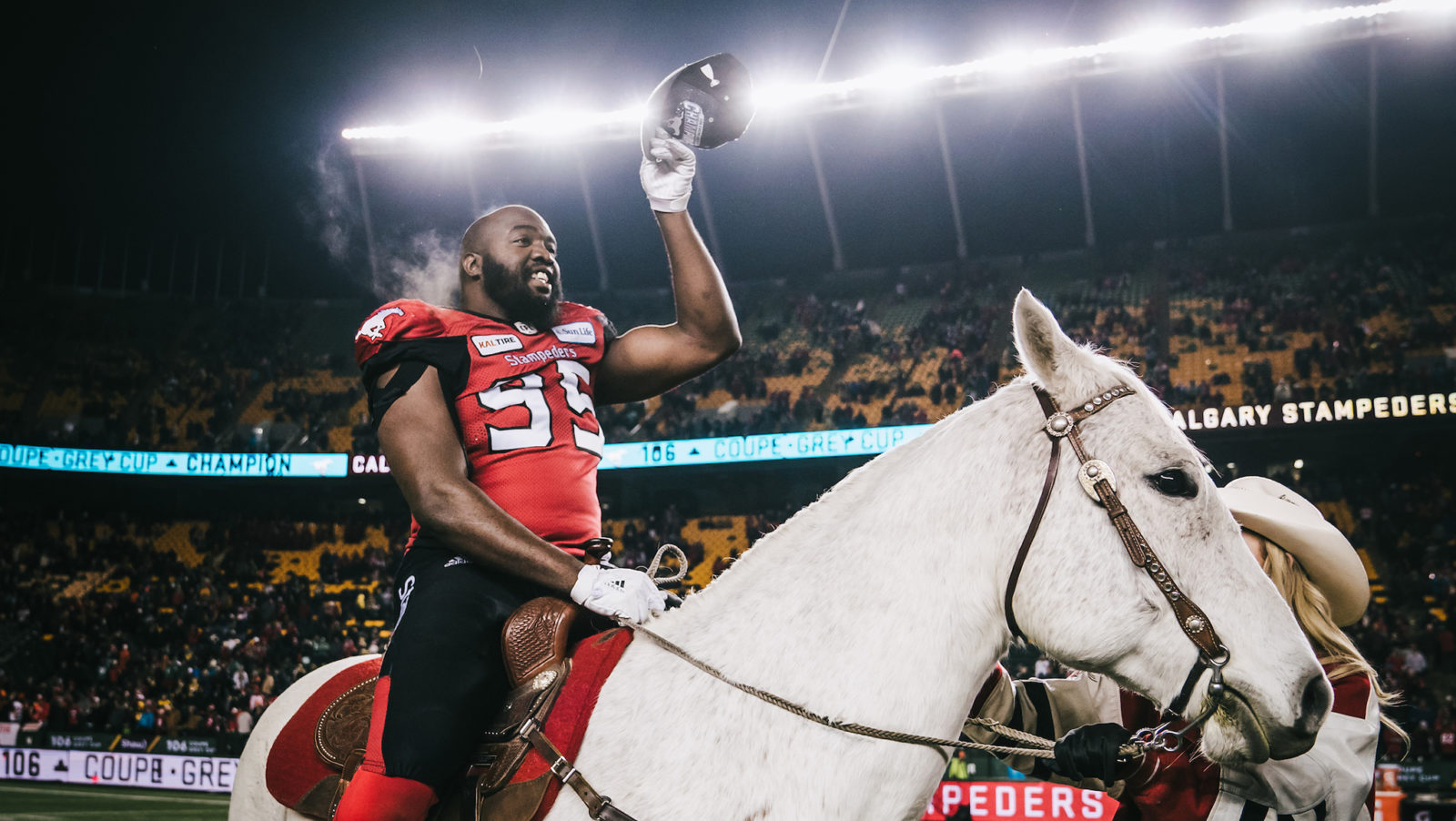 Steinberg’s MMQB: Are the Stamps ready to ride into the sunset?

I don’t know whether the 106th Grey Cup presented by Shaw was the last hurrah for this core group of Calgary Stampeders, but there’s enough to suggest it was. If Sunday was indeed their final salvo, this group of Stamps regulars will finish things on the highest note possible and erase so much heartbreak of the prior two years.

When you think about how many of these mainstays could be moving on this winter, the significance of Sunday’s 27-16 win over Ottawa really starts to sink in. Some members of this core group might be trying their hands south of the border, others may be moving up elsewhere in this league, and some others might be saying goodbye to professional football all together. Now victorious in 2018, it’s a good time for this group to reflect on all they’ve accomplished.

It’s hard to imagine a Calgary football team without Bo Levi Mitchell at quarterback. Since taking over the starting reins in 2014, Mitchell has two Most Outstanding Player nods, a pair of Grey Cup MVP awards, and most importantly, two championship rings he can wear forever. With all he accomplished in 2018, though, it should surprise no one if Mitchell isn’t under centre in Calgary to start next season.

For so many different reasons, there’s never been a better time for Mitchell to take a shot at the NFL. He’s 28 years old, at the end of his contract with the Stamps, and coming off his most impressive pro season. As a runaway MOP winner, Mitchell’s stock has never been higher and no one should begrudge him if he tries to maximize that opportunity.

He’s not alone, though. There’s a decent chance the NFL comes calling for a number of other prominent members of this team. Scuttlebutt suggests defensive cornerstones Alex Singleton, Jameer Thurman, and Micah Johnson could all be on the radar for tryouts this winter, which would be extremely well deserved in all three cases.

Soon to be 25, Singleton has back-to-back season of 123 tackles and major CFL awards under his belt in three stellar seasons. Thurman is soon to be 24 and has been in an impact playmaker in two seasons with Calgary. And Micah Johnson, while a little older at 30, just completed one of the most dominant seasons from an interior lineman this league has ever seen. Of course they’d be on the radar.

Then there’s defensive back Brandon Smith who just won his third Grey Cup in his 10th CFL season. Knowing the season he just had, it wouldn’t surprise anyone to see him back for season 11 in red and white. Similarly, though, there’s been enough talk this might be Smith’s last season; is there a better way to go out after a decade with the Stampeders?

And you can’t mention this team’s core without bringing up DeVone Claybrooks early in the conversation. Calgary’s defensive coordinator is loving his decision to stand pat last off-season and pull out of Montreal’s head coaching search. But make no mistake: this guy is one of the hottest coaching commodities, regardless of country or league.

If it’s what he wants, Claybrooks will be a CFL head coach one day very soon. But from what I’m told, he has plenty of nibbles south of the border, both professionally and at the college level. With what Claybrooks has done with this Stamps’ defence since taking over in 2015, you can understand why he’s one of the sought after names in football right now.

There’s no guarantee Sunday’s Grey Cup win was the last hurrah for Calgary’s central figures, as much stranger things have happened. There’s a chance most, or all, of this core group is back in 2019, in which case they’ll be favourites once again.

If this is the last ride, though, the Stampeders made sure it was worth it. Mitchell has sealed his legacy as one of the best quarterbacks this league has ever seen. Two devastating losses have been redeemed, if not erased. And Calgary can reflect on how elite this era has been.

Transition is equally exciting as it is unnerving most times. If these changes end up happening, they were going to regardless of Sunday’s outcome. Now the Stamps can bask in a deserving championship as an uncertain off-season begins.

Apparently Rene Paredes wasn’t happy seeing a bunch of his records shattered this season. Calgary’s kicker saw a pair of consecutive field goal marks surpassed by Ottawa’s Lewis Ward in 2018, so Paredes opted to set a new record in the final game of the year.

After nailing both of his attempts on Sunday, Paredes is now the CFL’s all-time leader in Grey Cup field goal percentage. He’s now perfect on all 11 attempts in five trips to the big game, breaking Mike Vanderjagt’s previous record of nine-for-nine. The irony is Paredes set the new mark head-to-head with Ward, who finished two-for-three in his first Grey Cup appearance.

Speaking of irony, I certainly saw a little in seeing Calgary’s Terry Williams set a new record with a 97-yard punt return touchdown to end the second half on Sunday. Williams shattered the previous Grey Cup record of 82 yards set in 1995 by Baltimore’s Chris Wright on one of the biggest plays of the game.

The serendipitous part is seeing the Stamps set a new Grey Cup record after being on the other foot one year ago. Calgary was the victim of not one, but two record-setting plays in a loss to Toronto in 2017. DeVier Posey completed a 100-yard touchdown catch in the second quarter before Cassius Vaughn returned a 109-yard fumble recovery to the house late in the fourth quarter.

In so many ways, Sunday was all about redemption for the Stampeders. Well, in this instance they got some in the karmic form. I’m sure it ranks right near the bottom of the list of significant achievements for Calgary on Sunday, but I thought it was a nice little cherry on top of their outstanding sundae (apologies for the truly awful pun).

Finally, cap tip to the REDBLACKS, because they deserve one. Yes, Sunday’s loss will sting, but this team has solidified themselves as an East Division powerhouse. With three Grey Cup appearances in just five years of existence, Ottawa should be extremely proud of what they’ve accomplished.

Free agency will determine lots this winter, but the REDBLACKS have cultivated an impressive core that includes Trevor Harris, Brad Sinopoli, Greg Ellingson, Diontae Spencer, William Powell, SirVincent Rogers, and Jonathan Rose, among others. If they can keep the lion’s share of this group together, which isn’t out of the question at all, they’ll be a 2019 frontrunner once again.