Tale of the Tape: Ferguson breaks down 106GC 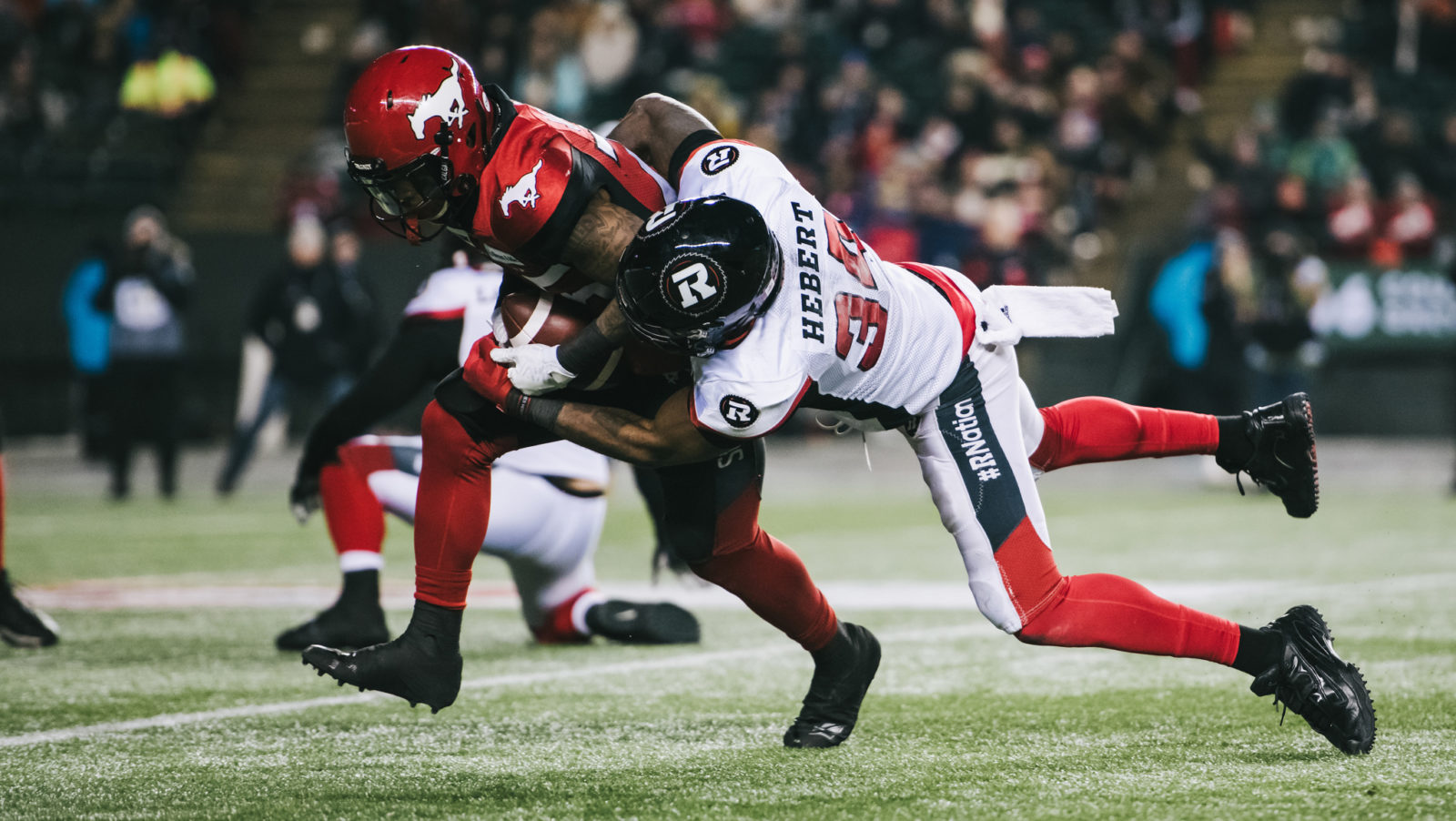 Tale of the Tape: Ferguson breaks down 106GC

The 106th Grey Cup presented by Shaw is in the books and the Calgary Stampeders are finally champions again. Throughout 2018 I’ve been amazed that the pressure to win the big one didn’t make Calgary implode. It’s a legitimate concern for a team who has to play 20 games over a five-month period, all the while knowing that they would only be judged on the result of the final game.

Nevertheless, Dave Dickenson and Bo Levi Mitchell found a way through adversity and receiver injuries to put together a squad who will forever be known as Grey Cup Champions. Let’s take a look back at the game – and week – that was.

First off, thank God for James Duthie. This guy just gets it, from a super serious opening to the game on national television through the post-game ceremonies presenting Bo Levi and Calgary with the Grey Cup, the guy is pure class.

He also knows how to dramatically chug a beer in front of a full theatre to get a laugh. RESPECT.

Duthie made an appearance again later in the week on television as TSN personalities made fun of themselves in the type of way that only the CFL can.

To the game we went, and buildup at Commonwealth Stadium as 55,000 people climbed into their yellow and green seats was special. The Sirius XM kickoff Show started the only way it should have, with The Reklaws dominating the stage.

Heads up, they have a new song coming out called ‘Roots’ that is a guaranteed hit.

After the Reklaws it was time for the national anthem, as always sung by a packed house of passionate CFL fans. Oh, and this little flyover thing by THE SNOWBIRDS!!

Seeing the reflection of fireworks off the bottom of the snowbirds flying low over a CFL stadium is one of the coolest visuals I’ve ever experienced.

Uh oh, was Ottawa going to find a way to make Bo look unlike himself as they did in 2016? I was standing 10 feet away from this interception and it shocked me how much ground Ottawa defensive back Jonathan Rose covered to rob Bakari Grant from a corner route touchdown. I’m guessing it shocked Bo too.

Thankfully for Calgary, Trevor Harris gave it right back in a second-and-10 situation while trying to pipe a hot shot into a window that just wasn’t big enough.

That interception was followed by a perfect call from Dave Dickenson. A screen pass back to the boundary against a Kyries Hebert blitz. Nobody was home as Don Jackson skipped into the end zone.

Giving up points off turnovers. The surest way to lose a Grey Cup.

Again from the end cut you get an even better sense of how perfect this call from Dickenson was.

Throughout the evening Canadians showed their best on Canada’s biggest football stage. Julian Feoli-Gudino had an out of body experience, making a play that I thought would have earned him Most Valuable Canadian honours had the REDBLACKS pulled it off.

Meanwhile, eventual MVC winner Lemar Durant caught this touchdown pass on a strange angle and was able to stretch for the end zone just before going down.

The one truly memorable play from the 106th Grey Cup has to be this 97-yard punt return touchdown by Terry Williams.

The Stampeders’ formula to win seems to always involve one of these jitterbug returns for a score and Williams’ effort certainly changed the dynamic of the game as Ottawa went from right there in the mix to trailing yet again. I wonder what that locker-room was like at half.

As halftime ended I saw Calgary linebacker Wynton McManis sprint from the locker room screaming for well over the length of the field. Needless to say he was fired up. Some guys talk. Others act on their outward aggression.

WOOF. Might have been the special teams tackle of the year in the biggest game. Clean, fast and hard hitting.

As the game wound down, the REDBLACKS – despite how it felt in the stadium – still had a very real chance to come back and make it a ball game in the fourth quarter.

What an effort on a well-thrown ball, but just barely unable to hold on.

After that, for Ottawa it was all downhill while trying to press for points as the clock increasingly became the enemy. Tre Roberson got this interception late, resulting in many stories being told about his family connection to the city of Edmonton and Commonwealth Stadium as the game wound down.

I was standing next to John Hufnagel as the interception was made. ‘Huf’ smiled ear to ear, turned around and screamed “did he get it, HE GOT IT!”

There were plenty of great moments in the post-game celebration but just three that stick out to me. The first is Alex Singleton with his sister. The visual speaks for itself.

The next was also Singleton as he rode into the Edmonton night atop Quick Six – who I think deserved MVP for the amount of work put in taking pictures post-game.

Win the #GreyCup, ride off into the sunset 😂 #Stampeders #CFL pic.twitter.com/M6ZuF20fje

And the final was long time Calgary trainer George Hopkins – who I first met when in training camp with Calgary in 2013.. he couldn’t have been more welcoming – trying to pop a bottle to celebrate with his Stampeder sons.

It took a while, but the payoff was worth it, just like Calgary waiting for their eight Grey Cup Championship in franchise history.