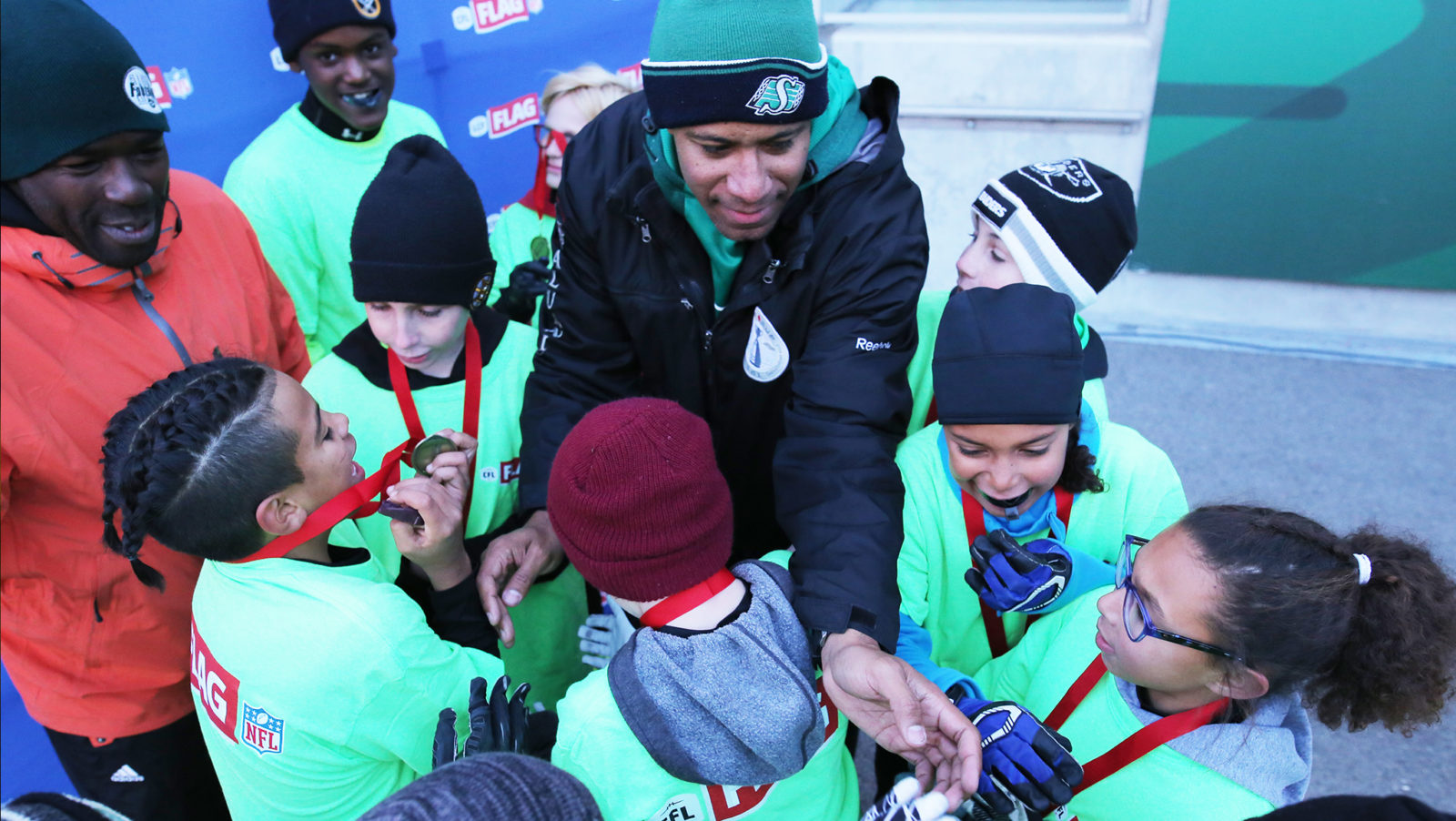 Plenty of athletes, past and present, have moments when they like to utter distinctive comments that have a positive impact.

Matt Dominguez is no different.

The former gridiron wide receiver, Grey Cup winner with the Saskatchewan Roughriders and fan favorite, also likes to talk about special times, focussing in on the personalities, the spirit and the character of some football players quite a bit younger than him.

A former Canadian Football League all-star, his pro days behind him, Dominguez is now centred on a career in real estate – but he hasn’t forgotten about a sport that has been part of his life since those teen years when he was a multi-sport athlete and an all-State football all-star in Texas.

Confident of his knowledge of the game, Dominguez has turned to mentoring.

Living in Regina, which happens to be home to one of the largest flag football league in Canada, with some 3,000 players actively involved, Dominguez is using sport to assist youngsters to learn, gain experience, as well as develop special goals and relationships. 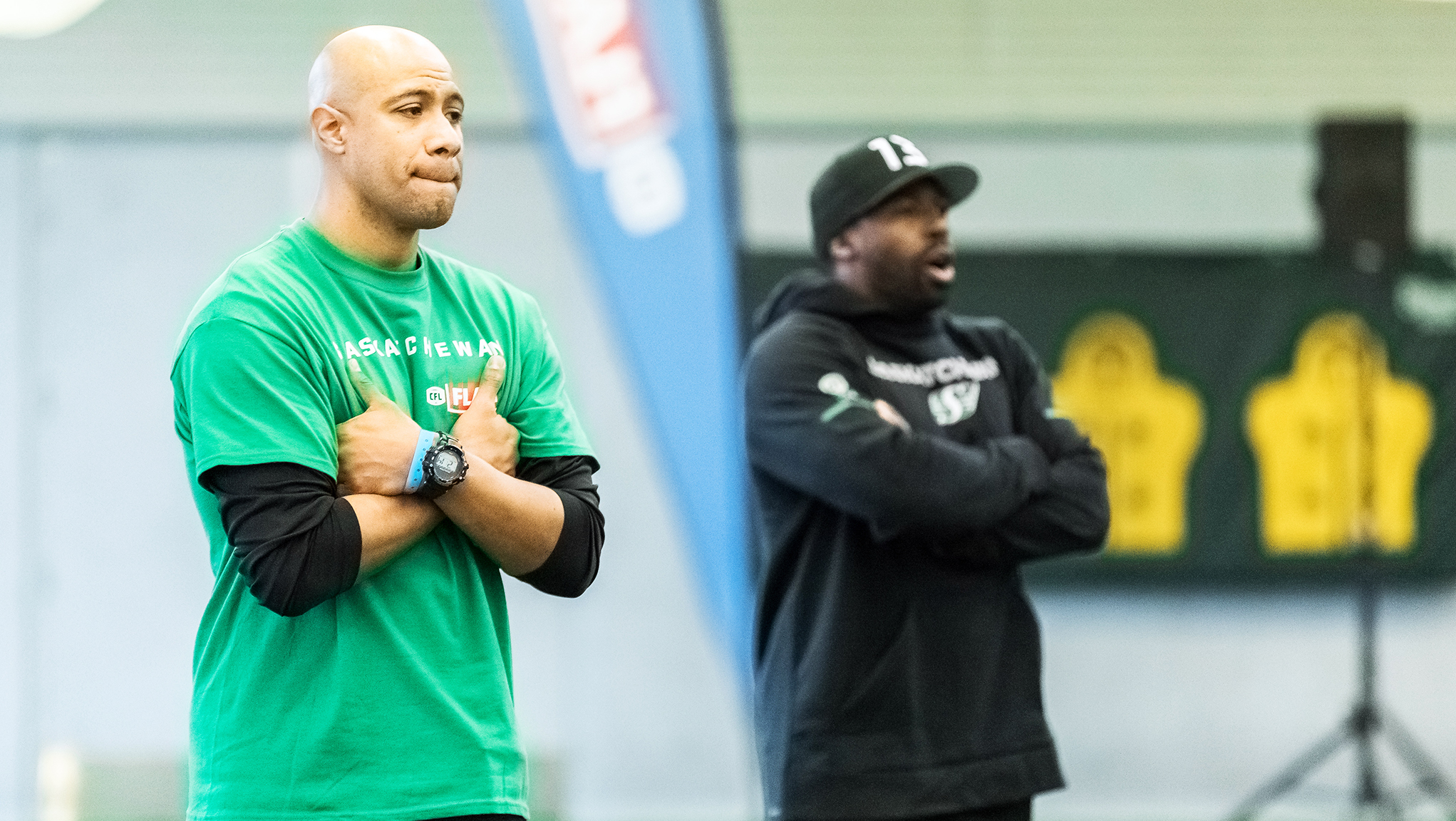 Looking back at the past couple of months, it has been something incommensurable for Dominguez.

“This was the first time that I had coached a team to a championship – and it was something quite memorable,” said the native of Georgetown, Tex., who got a taste of the NFL with Denver and the New York Jets, before ending his career after six seasons with Saskatchewan.

“While most people only see results, this was special because I got to see how hard these kids worked, the practicing, the focus, the dedication they put in – and it was the first year the team had won the big prize.”

For years, the cynosure of fans, Dominguez acknowledges that it takes more than just a football and a playbook to excel.

“You can’t put a price on role models, good teachers and coaches – it certainly helped me,” he said. “Instructing youngsters, who are passionate about learning, understanding the fundamentals, the work ethic and teamwork, is important to me. These are skills and things they will need to know as they get older and pursue their own careers and lives.”

Among the youngsters who have benefited from him are his three children: Matthew, 14, Victoria, 13 and Marcel, 10.

The co-ed team, that Dominguez coaches, is made up of 10 and 11-year olds, and nicknamed the Bomb Squad. They dominated the CFL NFL Flag Saskatchewan Regional tournament which took place at Mosaic Stadium in Regina. The Bomb Squad finished with an impressive 6-1 record which included a 19-15 win over the Bears in the championship game.

Marcel, by the way, was explosive on offence scoring the eventual winning touchdown and, on defence, was credited with the sack (held the flag up) on the opposing teams third down gamble that failed.

The victory gave Dominguez a chance to compete in Grey Cup Week. But this time, he was the coach. With his youngest son Marcel, and niece Samantha Minor on the squad, they qualified for the CFL NFL Flag Football championship tournament.

The team finished with a record of one win, two losses and a tie.

Worth noting is that Dominguez also spent a good portion of his Fall time coaching others – the Regina Minor Football (RMS) Thunderbirds tackle team, which lost in the league Final Four. His 14-year old son, Matthew, was part of that group. 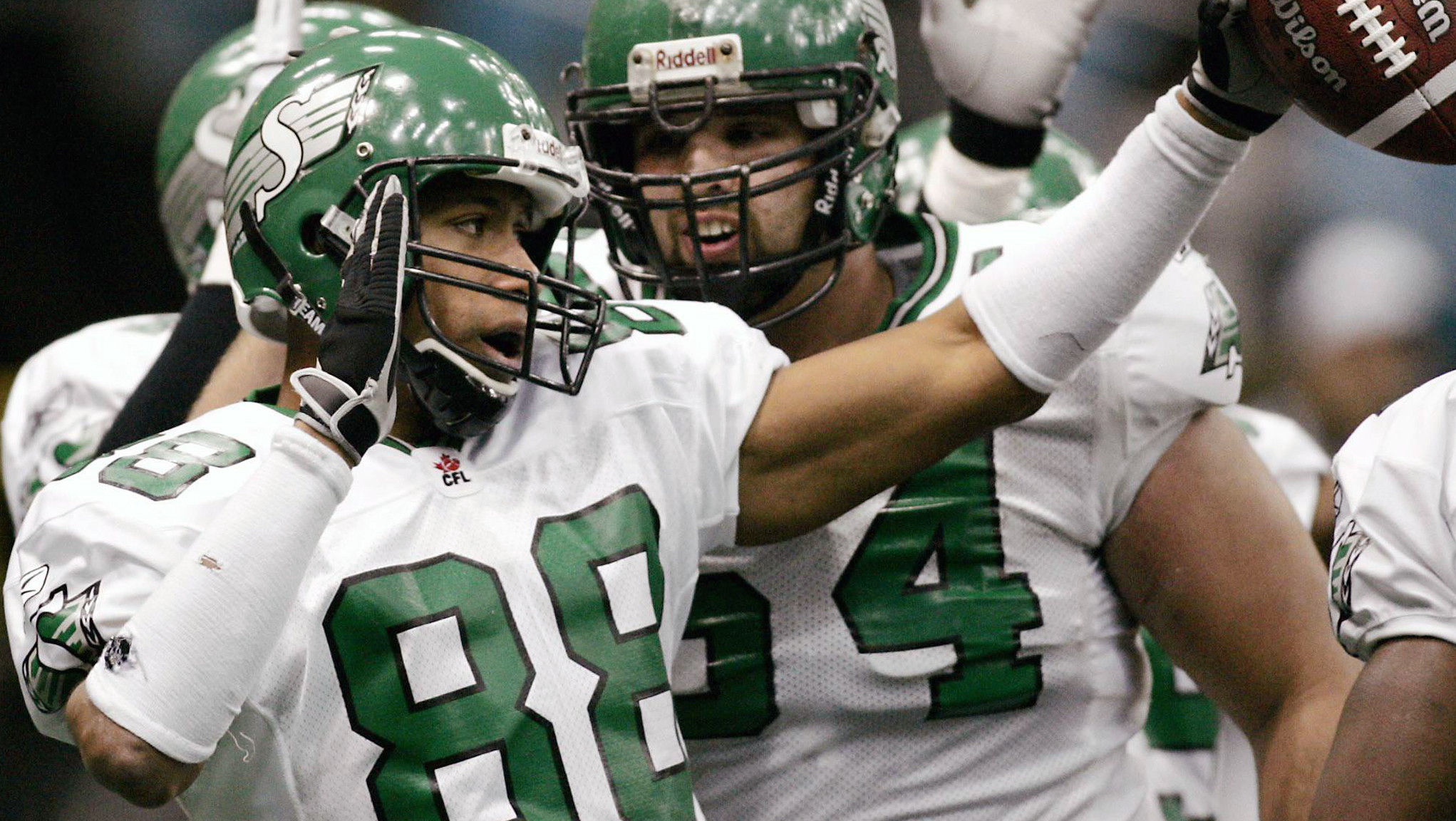 In his playing days, Matt Dominguez was an all-star receiver with the Saskatchewan Roughriders and was recognized last year by the club when was added to their Wall of Honour (CP).

“I have seen him coach and he’s very good at it – just had a huge positive impact with the kids,” said Mike Thomas, Convenor of the Regina CFL Youth Flag Football League. “His time, his popularity as a player in the community, the kids know and respect him.

“Parents are very supportive of what he’s teaching and he gets everyone involved. Kids from different backgrounds, you can see their emotion, the confidence they have and they’re overcome with joy to play, listen and have fun.”

Ali DeBruyne speaks volumes of Dominguez and his work ethic with young players – which includes her 11-year old son, Caleb, just one of some 250 young people that have been coached by the former CFL star.

“Caleb loves football and (Dominguez) has made it that much better,” she said. “He’s what a parent would expect of a coach working with their kids.

“He makes time for them, gets them to understand how important it is to play as a team, and I have seen him put fun in the game and show them the right way to play. We’re very lucky to have (Dominguez) on our side.” 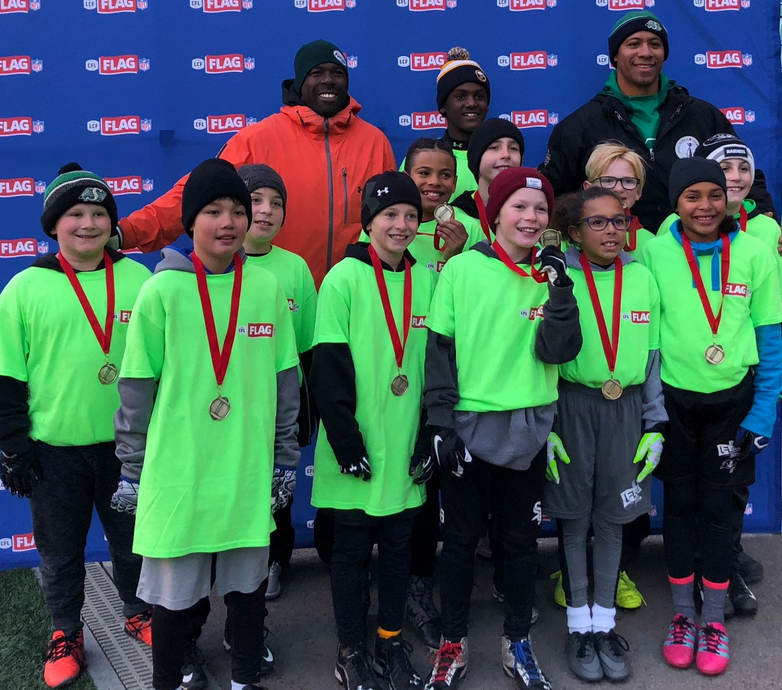 Dominguez seen here with the flag football squad he has coached after winning the championship at the CFL NFL Flag Saskatchewan Regional Tournament.

“When I was seven years old, I played flag football – and it was my first introduction to the sport,” recalled Dominguez, who is writing a book with his experiences as a football coach. “I was part of a team and that meant a great deal. Minimal contact and I knew how much fun it was back then.”

While times have changed in many ways, Dominguez continues to push cooperation and progression.

“I have a special set of skills that I can share with kids and watching them progress is awesome,” he said. “I tell parents that I will never be disrespectful, but I am also not quiet and they accept that. Sometimes, you need to give a kid a bit of motivation. For me, the coaching experience has been great because I have also learned so much working with kids.”