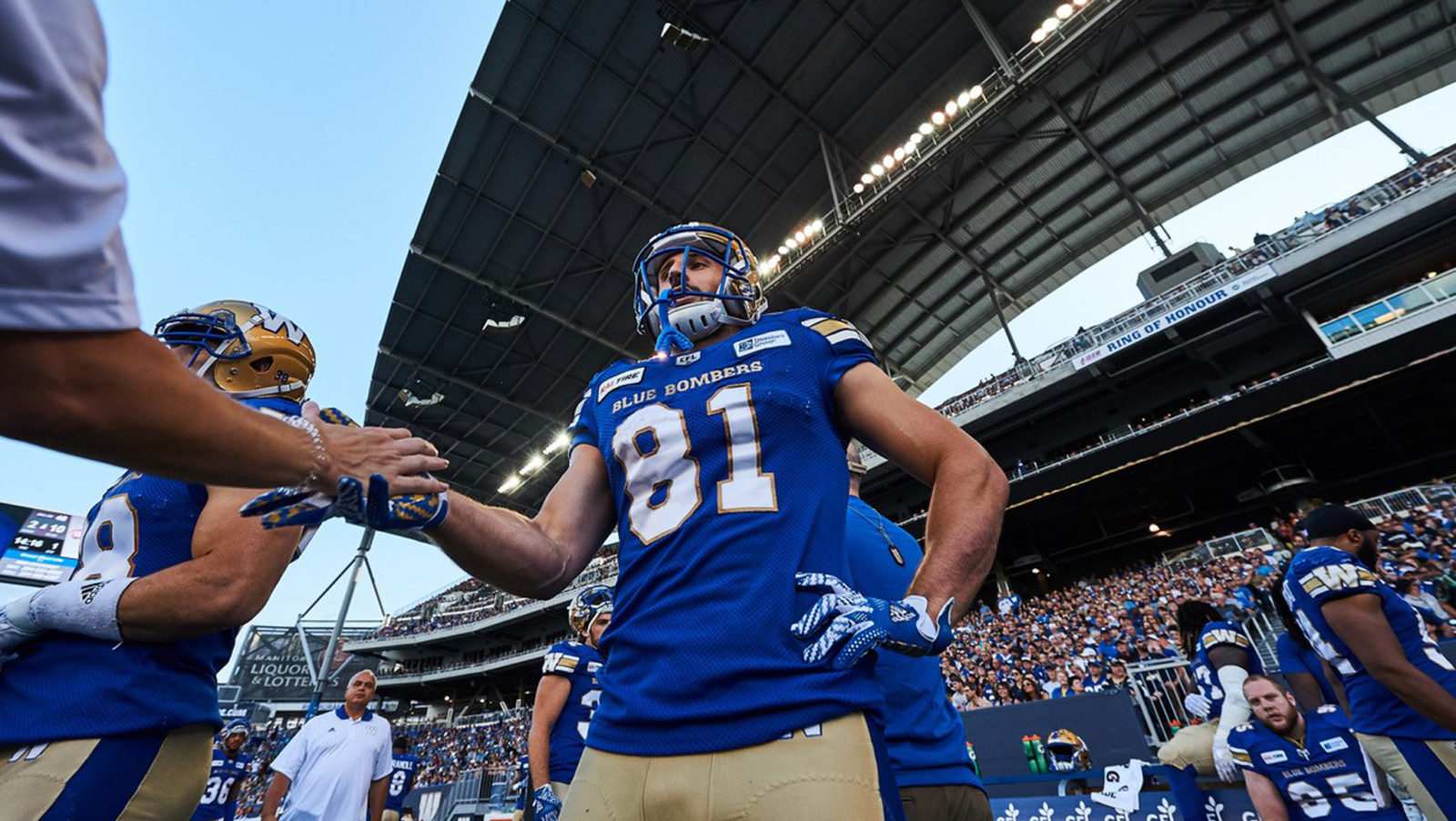 It happens to almost everyone.

There are times, when your thoughts return to a particular moment: the day, the place, the event, and you spend a few minutes to reminisce.

Now, a 23-year old pro wide receiver with the Winnipeg Blue Bombers in the Canadian Football League, football has impacted him in a positive way.

From embracing those high school days, going to extreme lengths to achieve and build self-confidence, to some remarkable times at the next level – and then, that moment when he paused after hearing his name called as one of the top university players in the country.

Special times for the guy from the small community of Winona, which later became part of Stoney Creek in the Greater Hamilton Area. That’s just where it may have been the catalyst to his success – in those grade school days at Immaculate Heart of Mary Catholic School.

“I played a lot of flag football, back then, and it sparked my love for the game – there is no doubt about it,” said Petermann, who praised his mother for getting him introduced to the sport. “Friday nights and Saturday mornings, I remember it well. So much fun and there were times when we just couldn’t get enough of it.”

» Bio: Daniel Petterman
» Former CFLer Dominguez giving back to sport that made him a star
» TDSB prioritizing equipment certification

Petermann was on a 5-on-5 team, with his sister Alexandra, who is a few years older than him. The team not only won local bragging rights, but also went on to win a pair of National championships. In Grade 8, Petermann also played on his school’s flag football championship team.

Moving on to Cardinal Newman Secondary, the urge to play sport continued – but Petermann decided to turn to the tackle game and, with a proven ability to haul in passes, contributed to the team winning two league titles. In one of them, his versatility at the sport helped, as Petermann kicked the winning field goal.

A multi-sport athlete, twice chosen Athlete of the Year at his high school and going on to become one of the most recruited post-secondary players in Canada, Petermann didn’t look far. He chose McMaster University.

Again, the similarities of success showed.

Elusive on the gridiron, Petermann controlled the outcomes by the smart decisions he made for McMaster and was the 2014 Rookie of the Year in Ontario University Athletics. A three-time league all-star, he also owns three school records in receptions: in a game (15), in a season (61) and in a career (181).

“Determination, good teammates and the fact that there are no assurances,” paused Petermann, punctuating his words. “You want to reach goals and to do that you have to work hard to try get there.”

With a Degree in Labour Studies from McMaster, Petermann had to make some decisions about his career. He likes helping people and sees himself as a fire fighter one day. But those plans have been put on hold – especially since Winnipeg scouts were so impressed by what they had seen at the league combine, that Petermann was selected 26th overall in the 2018 CFL draft.

“My objective is to be a starter (for Winnipeg), but to get there requires experience, patience and to keep impressing,” said Petermann, whose first pro touchdown came in a 32-27 home-field loss this year to Saskatchewan in the Banjo Bowl. “With maturity comes a sense of confidence and pride. You have to make a positive difference and that’s the way I am in everything I do.”