The flight crashed into Slesse Mountain on the evening of Dec. 9, 1956, claiming the lives of all 62 souls onboard including five Canadian Football League players; the quintet was travelling back from the league’s East-West All-Star Game in Vancouver. 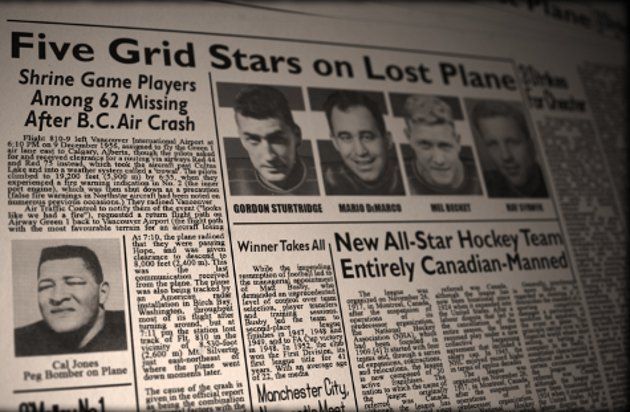 Mel Becket, a centre and tight end with the Saskatchewan Roughriders, was 27.

Mario DeMarco, an offensive lineman with the Riders, was 32.

Cal Jones, an offensive lineman who took the league by storm as a member of the Winnipeg Blue Bombers in 1956, was 23.

Gordon Sturtridge, a three-time all-star at defensive end as a member of the Riders, was 27.

The plane crashed into the side of the mountain, located roughly 30 kilometres southeast of Chilliwack, B.C., while on the Vancouver-Calgary leg of a cross-country trip. Remote terrain made recovery efforts difficult, and the remains of the both the plane and its passengers remain on the mountain to this day.

Despite an extensive search in the aftermath of the flight’s disappearance, the crash site was not discovered until the following May.

At the time of the disaster, the tragedy was Canada’s worst aviation incident; no definitive cause for the crash could be determined due to the state of the wreckage on Slesse Mountain.