If it were an in-game situation, the Toronto Argonauts were in short yardage and didn’t get cute.

In making Corey Chamblin the team’s 44th head coach on Monday, they took an experienced, successful guy with a very recent familiarity with the organization and punched it in for the score.

The 41-year-old from Birmingham, Alabama, is the perfect fit to fill the void created by last month’s firing of Marc Trestman. The head coaching experience he gained in Saskatchewan came in one of the highest-pressure single-season situations a coach in this league will face, steering the Roughriders to a Grey Cup at old Mosaic Stadium in 2013. When things didn’t end there the way he wanted, he took a year away from the CFL and resurfaced as the Argos’ defensive coordinator in 2017. His defence was a key piece of the Argos’ shocking Grey Cup win a year ago.

He went from that snowy, confetti-littered field in Ottawa last year to the University of Arkansas, where he was the Razorbacks’ quality control and defensive backs coach. Argos GM Jim Popp and team president Bill Manning said that Chamblin was the first of six candidates they interviewed for the job.

“It’s awesome to be back. This was home at one point in time and it’s going to be home for the next couple of years,” Chamblin said. “I’m excited to be here and excited to see the players, coaches, ownership. It’s going to be a fun time, I can tell you that.”

He returns to that familiar Argos double blue in a similar situation to the one he walked into in 2017. Those Argos were coming off a five-win season that saw Popp in as the new GM and Trestman as the new head coach. The 2017 season saw the Argos bottom out, falling to a league-worst 4-14, with their defence allowing a league-worst 560 points.

Chamblin knew it before he came to Toronto the first time, but things can change quickly in the CFL. Five-win teams can turn it around and host an East Final the next year. They can stun a favourite in the Grey Cup. And they can plunge back down the standings again. He saw it unfold in slower motion while in Saskatchewan.

“Like anything else, it’s just about growth and learning how to build a better boat,” Chamblin said of his time in Saskatchewan.

“At the end of the day that’s what it’s about, going through each situation, learning from those successes, learning from those things that were not as successful as I wanted them to be. (It’s about) being able to find a way to have as much success as we can on a day-to-day basis.”

More than anything, that’s what the Argos need and have needed over the last 10 years. They’ve matched extreme lows with extreme highs, but haven’t been able to string together consistency.

Manning stressed the need for consistency on Monday. The Argos are last in the league in attendance. With one full season under MLSE’s guidance, Manning said putting a winning product on the field is the first step in getting the team’s attendance up around the 18,000 to 20,000 mark per game.

“Corey mentioned it, it starts with winning. We’ve seen that with our other franchises,” Manning said.

“We need to put a winning product on the field and we want to support Corey and Jim however we can business-wise.

“It starts with the right attitude and the right performance on the field. It’s really tough to sell a team when you’re at the bottom of the standings. That’s why we put a lot of faith in Corey to get us back up to be competitive, to be a playoff team, something our fans can be proud of.”

The head coaching job in Toronto is different than any other head coaching job in the CFL. Chamblin isn’t expected to be a ticket sales guy or to sit in on marketing meetings, but there’s an ambassador-type role that comes with coaching in the league’s biggest market when it has its eyes set on substantially boosting its attendance. 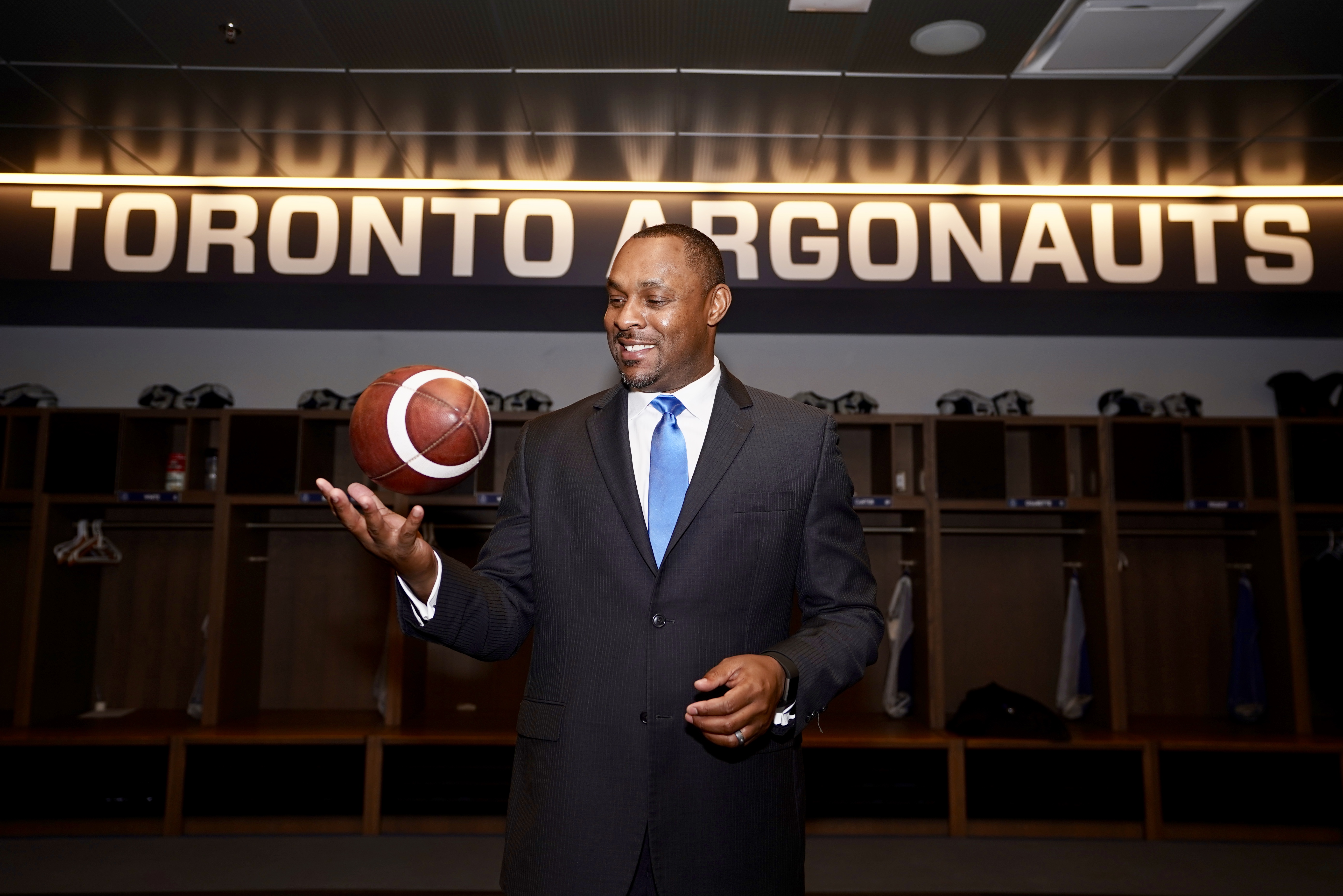 Corey Chamblin poses in the Argonauts locker room after a press conference confirming his hire as the 44th head coach in team history (Adam Krueger/Argonauts.ca).

Chamblin’s part in turning the red seats at BMO Field into ones stuffed with people in navy blue will be through building a winner, but he acknowledged a partnership of sorts with the business side of the organization.

“Bill and I have talked about that, everything has to mesh,” he said.

The offseason has just begun and there’s still much to be sorted out for the Argos. Chamblin needs to round out his staff, calling the offensive side of the ball a clean slate at this point. Popp has 37 free agents on his roster to wade through and of course, the league and its Players’ Association need to strike up a new collective bargaining agreement.

Defensive back Alden Darby Jr. is one of those pending free agents, but he was happy to be at the press conference on Monday, singing the praises of his new head coach. He admitted that there’s a lot of work to be done, but he saw an important first step made with Chamblin returning.

“Given what happened with the team last year and everything and knowing how (Chamblin) is, this is what we needed,” he said. 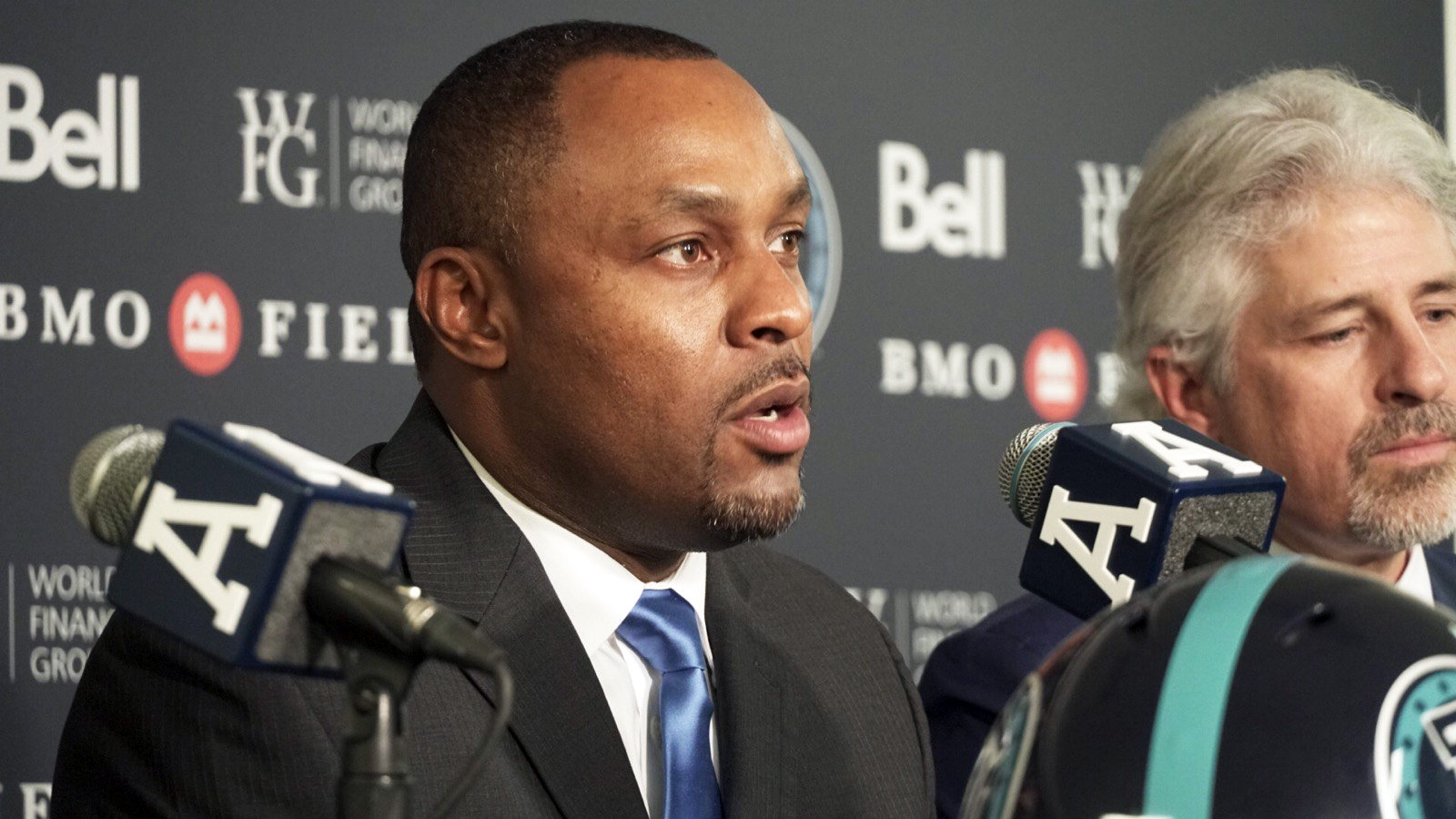 Chamblin addresses the media Monday in his return to Toronto at BMO Field (CFL.ca).

“We needed a standup guy, a guy that’s black-and-white, no grey areas. We needed to know what we’re going to get. He walks and talks the same. This is what we needed.

In his CFL rookie season in 2017, Darby said Chamblin believed in him, and pushed him, getting the most out of him. The Long Beach, Cali. native is spending the offseason in Toronto. He loves the city, loves volunteering in the community and sees Chamblin as a big part of his happiness here.

“I’m excited to have the opportunity to play under him again, if everything works out,” he said. “This is a great hire.”