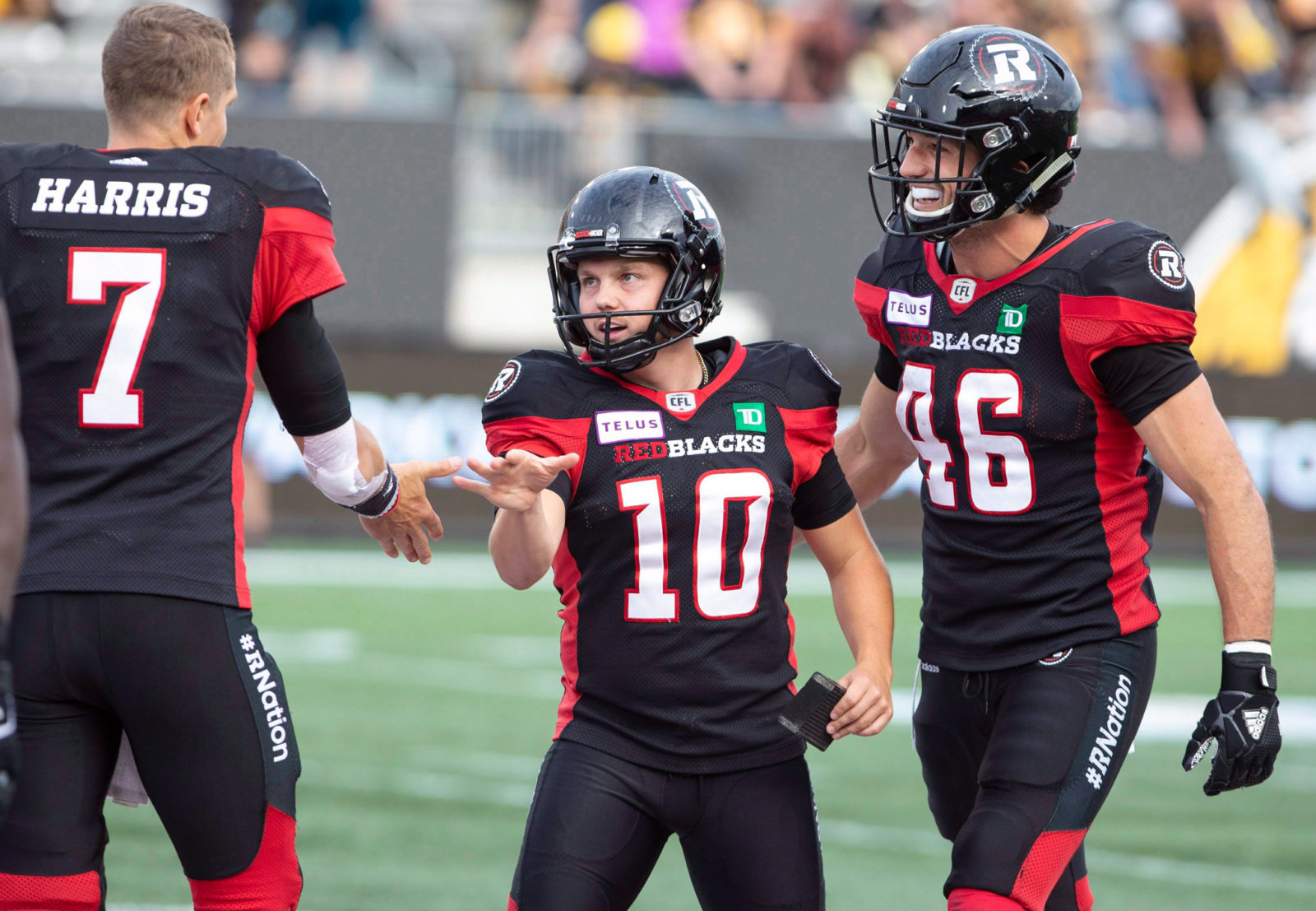 For people who celebrate Christmas there are so many traditions this time of year depending on what this holiday season means to you. From last-minute shopping to gaining 10-15 pounds to ugly sweaters, the month of December is filled with our own particular holiday habits.

For me, the arrival of Christmas means a month long deep dive into my favourite Christmas movies, and for the purposes of this column how I can relate my favourite Santa-inspired films with certain players, teams or some of the most memorable moments from this past CFL season. So as you’re getting to set watch Kevin McAllister, Ralphie, Buddy the Elf or your favourite shoeless cop fighting inside the Nakatomi Plaza, please enjoy my annual Christmas-movie-themed final CFL column of the year.

1. Johnny Manziel = Every Christmas movie on the W Network/Hallmark Channel

Beyond lots of sweaters being worn and awful titles (do we really need ‘A Very Merry Mix-Up’ and ‘Switched for Christmas’?) the most common theme all these films share is that they’re almost all bad yet you can’t help but get sucked in. We’ve all been there where we look up and realize we’ve been watching Candace Cameron Bure learn the true meaning of Christmas for the past 45 minutes.

The same is true of Manziel. For a variety of reasons he had a rather lousy debut season but whenever he was on the field I couldn’t take my eyes off of him. Maybe it was the novelty factor or my desire to see him succeed but I always watched more of the Alouettes than I was intending to whenever he was on the field. In both cases we know the outcome would probably end poorly yet we’re still not changing the channel.

This one is almost too easy. Rudolph for so long wasn’t allowed to play in any Reindeer games and was only called up when things looked bleak. Then when the red nosed one was finally pushed into service he performed a near miracle, guiding Santa’s sleigh on that foggy Christmas night.

The Argonauts’ season was going horribly when Marc Trestman announced Bethel-Thompson would make his first ever start in the CFL. Thompson had gone undrafted and had bounced around many NFL training camps without ever making an impression. Clearly no coach or general manager wanted McLeod to play in any football games. But then on that August night, Thompson had a stunning second half of football, coming back from 24 points, hitting Armanti Edwards with a touchdown pass with one second left on the clock giving Toronto a 42-41 win and one of their few positive moments from this past season.

3. The BC Lions coaching staff = ‘Rise of the Guardians’

Just look at the some of the former all-stars and Grey Cup Champions who are now coaching in Vancouver! DeVone Claybrooks (head coach), Ryan Phillips (DBs), Bryan Chiu (OL), Nik Lewis (RBs **Yes, Lewis is the running backs coach) and Keith Stokes (STs & offensive assistant). Not only are we looking at a hell of collection of former CFL stars but this list makes me feel old as I remember watching them all play in their primes.

In case you haven’t seen it, ‘Rise of the Guardians’ also features a who’s who of famous people with Santa, the Easter Bunny, the Tooth Fairy, the Sandman and Jack Frost teaming up to help ensure that the world is not taken over by the evil Pitch Black. This movie may have slipped through the cracks but it’s worth a watch, solid Christmas movie.

4. Jason Maas vs. a Gatorade Bucket = The Clark Griswold freak out in ‘Christmas Vacation’

Both are moments of controlled rage that are hilarious to re-watch over and over. One involves Clark finally losing his temper as all his Christmas plans are being ruined by a variety of forces as he has to come to grips with not getting his Christmas bonus, which will sink his chances of building his family a pool in the backyard.

Maas was in a far better position than Clark as his team was winning in the first half of their Week 8 contest against the Saskatchewan Roughriders, but that didn’t stop the coach from attempting and ultimately failing to body slam the bucket. Mass may have lost the battle with the inanimate object but at least his team ended up winning 26-19.

‘Gremlins’ starts off in the sleepy town of Kingston Falls, where everything is all Christmassy with the whole town looking like a winter wonderland. But soon this Norman Rockwell image is replaced by chaos and destruction with the appearance of the Gremlins. Toronto was coming off of a magical Grey Cup win with a healthy Ricky Ray to start the year. We all know how that one turned out.

6. Calgary wins the Grey Cup= The end of ‘A Christmas Carol’

It’s not until Ebenezer Scrooge is visited by three ghosts does he finally get salvation from his miserable lifestyle and can fully embrace the joy of living and the company of his fellow man. The Stampeders were haunted by three successive years of playoff failures despite being the league’s best team during that span (42-10-2) before finally taking home the trophy and in the process dispelling the specter of not being able to “win it all” with such an impressive array of talent. I think if you go back and watch the end of the Grey Cup you can hear Bo Levi Mitchell say “God bless us. Everyone.”

One is an intense battle of charismatic stars filled with explosions and incredible feats of athleticism and the other is John McClane fighting off a group of well-trained thieves posing as some sort of terrorist group. John McClane (Bruce Willis) going up against Hans Gruber (Alan Rickman) is the cinematic version of Bo Levi Mitchell versus Mike Reilly. One involved a giant sky rise building blowing up and the other had over 1,000 combined yards and 90 points! Both were wildly entertaining.

8. The on-going pursuit of an Atlantic based CFL team = ‘Miracle on 34th Street’

When it finally happens we can call it Miracle on Barrington Street. The plot for ‘Miracle on 34th Street’ is all about finding proof that Santa Claus truly exists. We’re all rooting for Santa to be true and it takes a court case before it finally happens. In the football world all of us are hoping for that 10th team to become a reality soon. It got another step closer with the announcement that Toronto will be taking on Montreal in late August for the “Touchdown Atlantic” game. Something tells me before it is a done deal the process of getting the Atlantic Schooners off the ground will also require much deliberations in a government building.

Hebert was rightfully suspended twice this season for reckless hits to both B.J. Cunningham and DaVaris Daniels. But just like Billy Bob Thornton’s character also had an actual good side when he wasn’t inside a mall posing as Santa, the same can be said for Hebert when he wasn’t targeting vulnerable receivers. Just to remind everyone, Hebert did win the Tom Pate Memorial Award in 2013 and is a driving force for the KY Cares Foundation, which is all about helping children and giving back to the community.

Each involves a high number of intersecting storylines involving people of just about every background. In ‘Love Actually’ the characters range from the Prime Minister of England to Adult Film stand-ins. While this off-season we will see players, coaches, general managers and owners all trying to find the best way to improve their own respective situations. In both film and reality there are so many characters we are rooting for but just like it doesn’t work out for everyone in ‘Love Actually’ (See Laura Linney), there are going to be fan bases bummed out about losing their favourite players (See Kwaku Boateng) to free agency.

11. Alex Singleton hugging with his sister Ashley after winning the Grey Cup = The end of ‘A Charlie Brown Christmas’

I always tear up at the end of the movie with all the kids cheering up Charlie Brown by fixing up his old Christmas tree as they start singing ‘Hark the Herald Angels Sing’. The same can be said when you witness the pure emotional joy of Alex bear hugging his sister.

12. Orlondo Steinauer finally gets to be the head coach = ‘It’s a Wonderful Life’

Here’s a constant for this article: I will always find a way to work in my favourite Christmas movie. The end of the movie is the classic moment of triumph for George Bailey as all his hard work pays off as he realizes that he truly belongs in Bedford Falls. Orlondo has been working up to this moment since 2010 when he was a part of the Argonauts coaching staff.

George Bailey wanted to get out of Bedford Falls while Steinauer briefly left the CFL to take a job for the Fresno State Bulldogs. In the end they both found exactly what they were looking for.

In ‘Elf’ Will Ferrell comes out of nowhere to make a huge difference at both Gimbels department store and more importantly helps bring his real family together. Ward went from an undrafted kicker with the Ottawa Gee-Gees to breaking the consecutive field goals record and becoming the first ever kicker in CFL history to win the Most Outstanding Rookie Award.

Every time Ward set either a team, a CFL or a professional football record I wanted to quote Buddy when he enters that New York City diner: “You did it, congratulations!”