Tale of the Tape: Ferguson looks back on 2018 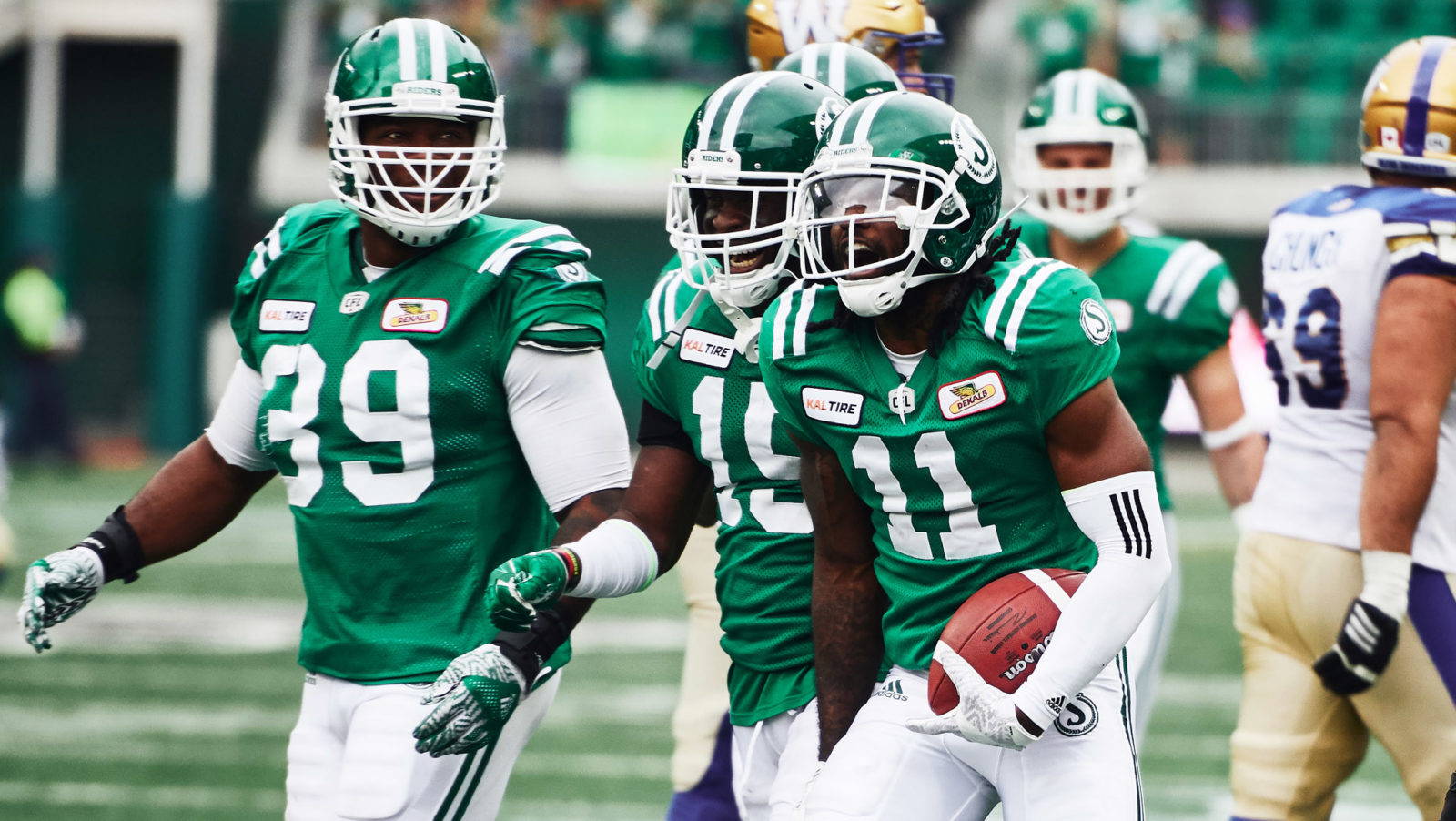 Tale of the Tape: Ferguson looks back on 2018

Out with the old and in with the new. It’s time to say thanks for 2018 and begin to answer some questions about what the 2019 CFL season will look like, but before we get there let’s take a look back at some of my favourite moments from 2018 for all nine teams.

It’s a year-end recap of my weekly in-season visual bonanza, Tale of the Tape!

We all remember where we were when Johnny Manziel caught a pass. Wherever you were I’m sure the earth rumbled with the magnitude of the moment.

Okay, maybe not, but it was a nice design and smart way to get an otherwise meaningless play put on SportsCentre endlessly.

There was a section of 2018 when I genuinely thought the only way Manziel and the Alouettes were producing on offence was trick plays. Be that a false narrative or a cold truth, the fact is it became fun to see what sideways manner of moving the ball Montreal would attempt next, including this double pass from Week 20.

Somehow Stefan Logan continues to make people look stupid in the open field. This slow motion captured juke from Week 14 stuck out for me as one of the best open-field moves of 2018.

The Eskimos clearly did not have the year anyone in the city or organization wanted, after starting strong and finding a way to miss the Grey Cup playoffs altogether. With that being said, the eventual Grey Cup Champion Calgary Stampeders played two games against Edmonton, which showed just how little difference there can be between the mountaintop and rock bottom in this league. This hit by Chris Edwards was one of my favourites from the Green and Gold in 2018.

The next two plays I picked because – to me – they symbolize what the season was for Edmonton. Great hope followed by a shake of the head. Perhaps no play visually represents that more than the Hail Mary that could have been one of the most stunning late game results in recent memory, but was just a footnote at the end of a story that included a late-game pick-six for Saskatchewan’s ‘Monstar’ defensive end Willie Jefferson.

And finally, a drop. Why? Because nothing hurts more than a drop and 2018 hurt for Eskimos fans. How sweet it would be for Edmonton to turn it around in 2019 and have a chance to storm McMahon in late November for a Grey Cup…

In the last look at a non-playoff team in this 2018 recap, we look at none other than the Toronto Argonauts. This misdirection run from Week 16 was one of my favourite small wrinkles the Double Blue threw into their 2018 game plan.

Whatever the Argos did well in 2018 seemed to involve S.J. Green.

As he has aged, S.J. has remained steadfast as a leader vocally and physically for this Argos team despite crashing from Grey Cup Champion to playoff elimination before the dance began, all the while making ridiculous jaw-dropping catches.

No play better characterizes the Argos’ reasoning for missing the 2018 playoffs than one that displays their struggles at quarterback after Ricky Ray went down early in the season to injury. In a single video clip, this Macleod Bethel-Thompson interception could set the scene for a new CFL fan on how Toronto struggled in 2018.

What a ride the 2018 BC Lions went on. It included a playoff game in the East, Wally’s last dance, and oh yeah.. A game where everyone in the stadium was on their feet for seven minutes from fourth quarter game-tying drive start to end. A drive that included this ridiculous throw by Jonathon Jennings into tight coverage.

And this toe-tapping masterpiece by Bryan Burnham. I was there calling that game for TSN 1150 Hamilton and it was unlike any finish I have ever been around. An incredible display of the unpredictable CFL, resulting in an understandably dead quiet Ticats red-eye flight home.

For the BC Lions in 2018, the secondary and pass rush emerged as the driving force of their success. One of my favourite league-wide plays this year came from this near interception by Anthony Orange. Pretty obvious how the film room work pays off when you see a jumped screen like this. Now Orange and the rest of BC get defensive specialist DeVone Claybrooks as their head coach. I can’t wait to see what he and his staff bring to Vancouver in 2019 with players like this close to consistently making game-changing plays.

The Riders defence is the best. It just is. They fly around, they hit, they get to the quarterback and they have defensive backs doing superman impersonations as Ed Gainey did on Labour Day to get an interception.

Unfortunately for Riders fans, their downfall was the offence. It is a group with big potential moving forward, but that needed a little luck such as this play in 2018.

My favourite play for the Riders in 2018 wasn’t a big kick by Brett Lauther or a punt return touchdown. It was a singular play that defined their season: Willie Jefferson being one of the best defenders in the whole league making a game-changing play.

I’m blonde. I have been known to grow a beard. I used to play quarterback and I love me some flannel worn while slinging the rock in the snow because CANADA!

This visual confirmed what I already believed in 2018. Chris Streveler is one of my favourite players in the CFL.

As an aside, he’s actually fun as hell to watch too. He runs like a wild animal in search of food after months grazing a barren wasteland and has a suddenness to his game through the air or ground that makes football fun to watch. Need an example? Look no further than this SWEET lefty throw with an underrated and forgotten one-hand snag by Streveler’s main man Drew Wolitarsky.

The Bombers had plenty to celebrate in 2018 and when they did it often included the fans, be it in a Nic Demski stair walk or this terrifying visual of a 300-pound man jumping at full speed towards you.

As a result of being around the Ticats each day for work, I could go on and on about what their season entailed, but I thought I’d just pick three of my favourite 2018 Ticats visuals to summarize their season.

The first is an amazing cable cam shot of Jeremiah Masoli’s pocket movement and accuracy while finding Luke Tasker downfield. I can’t tell you how irrational it would be to say Masoli could make a throw like this back when I started covering the team in 2015. Jeremiah’s development has been the best part of my four years following the team because it’s resulted in throws like this that make your jaw drop.

Oh, you wanted more? How about dropping a ‘tempo’ or ‘feel’ route perfectly between four defenders to one of the CFL’s smallest players.

And finally for you, I could have gone defence with the Larry Dean interception returned for a touchdown against Calgary or Simoni Lawrence doing just about anything, but this Mike Jones double move was way too smooth not to be celebrated in one of my favourite clips of 2018.

Ahh yes, the Ottawa REDBLACKS. What a memorable year for Ottawa football fans. One that was in large part dominated by the story of their diminutive rookie kicker who they celebrated wildly each week as he shredded the record books.

The REDBLACKS had home field in the East thanks to their dominant late-season efforts over the Ticats. A series which I believe was punctuated by Trevor Harris’ accuracy in driving wind and rain at Tim Hortons Field. Even his backup Dominique Davis – who I really love and would be interested to see get more playing time elsewhere in BC or Edmonton as he’s a free agent this off-season – got in the action that day in Hamilton!

The REDBLACKS made it to the Grey Cup where I watched a special play by Julian Feoli-Gudino from 10 feet away on the sideline. It was one of those plays that get seared into your memory because it comes out of nowhere. Thanks to Feoli-Gudino the REDBLACKS still had a shot at taking home the ultimate prize in 2018.

For the Calgary Stampeders, I picked three of my favourite shots from their Grey Cup victory season with a heavy emphasis on the game itself. The first is the top Canadian on the day – Lemar Durant – getting into the end zone way back in Week 19 before celebrating with Quick Six.

While Durant played a big part in the Grey Cup win in Edmonton, the true spirit breaker came from Terry Williams just before the half.

No visual in 2018 better summarized what it means to win a Grey Cup than George Hopkins struggling to open the bubbly before finally getting the sweet taste of victory.

Happy New Year to CFL fans everywhere. You all make covering the league enjoyable with your passion. BRING ON 2019!