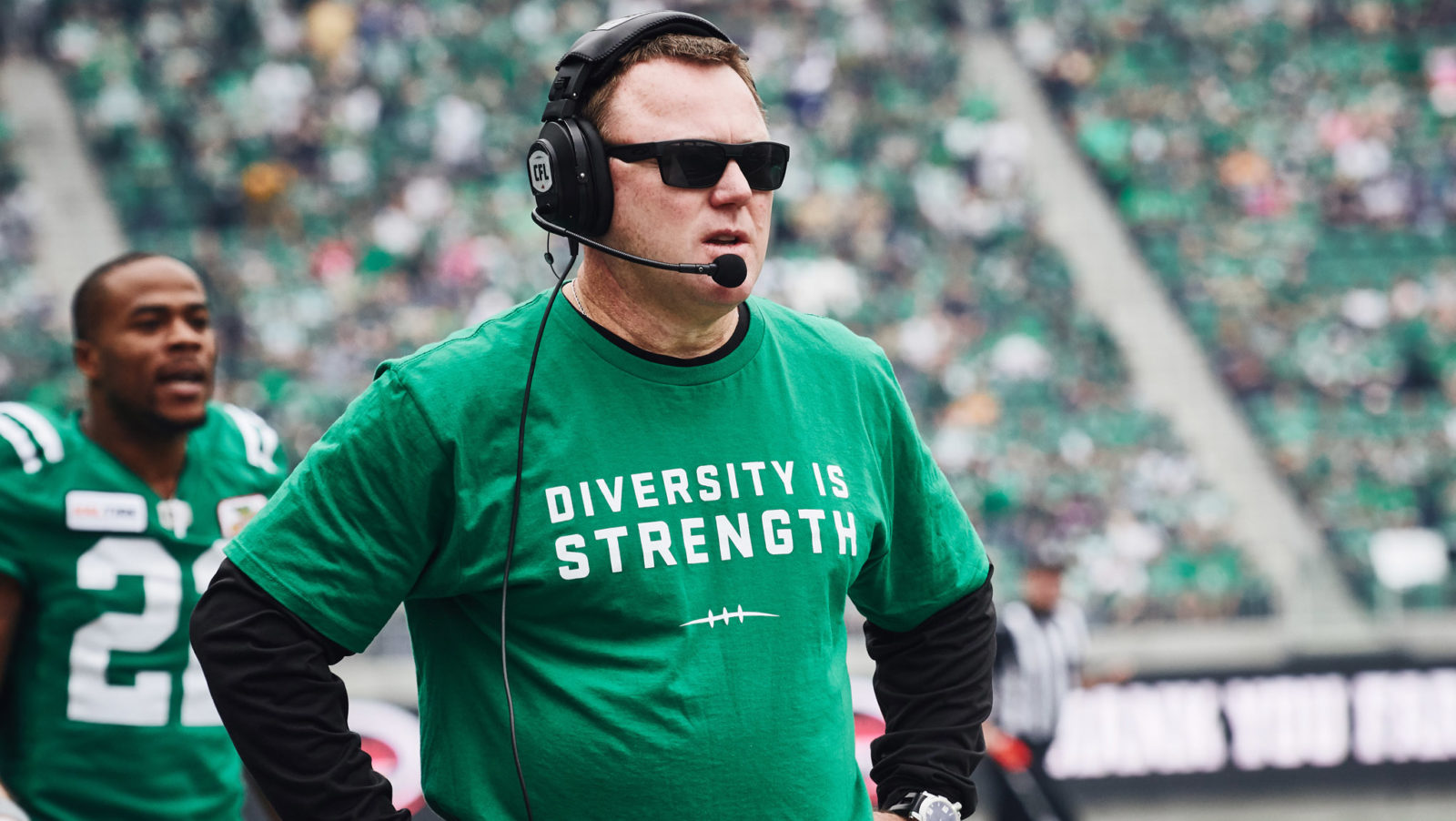 Since Chris Jones took the reins for the 2016 season, all the Saskatchewan Roughriders have done is improve each and every year. With Jones signing an extension through 2020, it gives the team’s head coach and general manager an opportunity to finish the job he started three years ago. The Riders are trending up under Jones and they’ve returned to “Grey Cup or bust” territory.

After a rough first year at the helm in which Saskatchewan went 5-13, Jones has seen his teams improve to 10-8 and 12-6 in two subsequent seasons. 2018 saw the Riders finish the season 9-2, hosting a playoff game for the first time since 2013. While Saskatchewan fell 28-13 to the Bombers in the Western Semi-Final, this past season was still a step forward.

What’s impressed me most under Jones is how quickly the Riders adopted Jones’s personality on the field. Throughout his tenure in the league, Jones has been known for having speedy and versatile defensive groups that fly to the ball and force turnovers. I would suggest that description was quite apt for Saskatchewan over the last two years.

Defensive mainstays Willie Jefferson, Ed Gainey, and Sam Eguavoen were all brought in under Jones and have transformed into big time impact makers in three years with the Riders. Along the way, we’ve seen Saskatchewan make big additions like Charleston Hughes and Loucheiz Purifoy to round out an impressive defensive group.

The results were staggering in 2018, as you can see below:

I also have appreciated Jones’s willingness to make big splashes, even if they haven’t always proven to be ultimately successful. Jones knew he had to find a quarterback for 2018 and pounced on the top available guy when the Riders acquired Zach Collaros from Hamilton. Sure, Collaros had his struggles, both on the field and with injuries, but I appreciate the attempt to fix a problem.

Similarly, it was Saskatchewan coming out ahead in the Henoc Muamba sweepstakes in the fall of 2016. Muamba was returning from a short stint with the NFL’s Dallas Cowboys when he chose the Riders over a number of teams bidding for his services. In the end, Muamba played parts of two seasons in Regina before spending 2018 with the Alouettes.

What lies ahead for the Riders is uncertain, much like every other team due to free agency. Eguavoen has already signed with the NFL’s Miami Dolphins while Jefferson leads the list of unsigned impact defensive players. Add to that a completely uncertain future at quarterback and Jones has a lot on his plate over the next few months. Knowing his history of courting big time players, though, would it surprise anyone if Jones went hard after Mike Reilly or Trevor Harris?

There’s no doubt Jones marches to the beat of his own drum and he’s turned into a polarizing figure across the league. But it’s tough to argue with the results and even tougher to dispute Saskatchewan’s decision to extend him. Jones had reported NFL interest but has opted to remain with the Riders.

This is a team on the precipice and Jones has been a huge part of their ascent. It stands to reason he’d want to stick around to try and get his team to the top of the mountain.

A match made in heaven

The Calgary Stampeders will miss Alex Singleton in a big way. After all, a ratio busting perennial defensive MOP candidate is a rare commodity. With Singleton signing with the NFL’s Philadelphia Eagles last week, the Stamps are losing their defensive quarterback while the league is saying goodbye to one of their great ambassadors, at least temporarily.

While Singleton’s departure will leave a huge void, the legacy he leaves in Calgary and across the league won’t soon be forgotten. As a young, ferocious, gregarious, friendly, and well-spoken linebacker, Singleton was an easy player for the league to market around. But it’s his work off the field that I believe will leave the largest lasting impression.

In three years with the Stampeders, Singleton did an incredible job of bringing national attention to Special Olympics and the powerful impact the organization makes in the lives of so many athletes, parents, and volunteers.

If you’re not aware of the story, Singleton’s older sister Ashley has been involved in Special Olympics from a young age in Thousand Oaks, Calif. That means younger brother Alex was essentially born into the Special Olympics family, which is something he attributes his drive and determination to. 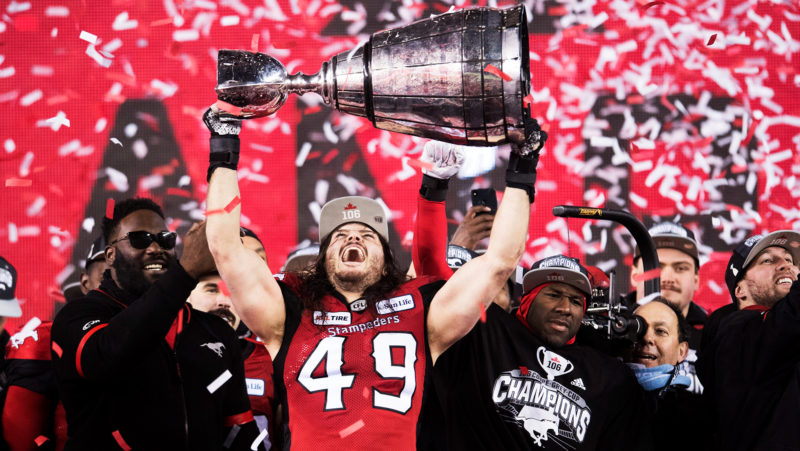 If you’ve ever heard or seen Singleton talk about his sister, you’d know there’s no fabrication when he talks about how important she’s been throughout his career. To say she’s been the reason he plays would be an understatement.

“She’s the only person in my life that I know that with Special Olympics will be able to compete in sports her entire life,” Singelton said. “I’m just trying to prolong my existence in sports just to be able to keep up with her.

“She’s the biggest role model. It’s just so cool what she does and how big of a competitor she is. The second I came home from signing with the Eagles she was like: let’s go bowling so I can kick your butt again. She’s 100 per cent always ready to compete and it’s where I get it from. Having that big fan in my corner is truly special.”

Now a member of the Eagles on a futures contract, Singleton likely couldn’t have chosen a better fit.

“I grew up a big Packers fan for whatever reason. I just liked Brett Favre (because) I played quarterback when I was little. But my sister always liked Donovan McNabb and was an Eagles fan. I don’t think she cares where I go. You know, because I was with Seattle, New England, and Minnesota my first year, she still cheers for those teams just because I was on them. Now she hates all the other 31 teams. Now she wants the Eagles to win the Super Bowl.”

Singleton isn’t done with his association with Special Olympics Calgary, either. The city is hosting the Alberta Provincial Games Feb. 8 to 10 of this year and he’ll be there supporting and cheerleading as per usual. Plus, Singleton will be using his day with the Grey Cup to help raise funds for the Games in the coming weeks with details to come shortly on his Twitter (@Singleton49).

“Honestly, you know, all of Special Olympics, whether it’s Calgary or Thousand Oaks, both sides have reached out with so much thankfulness and gratitude.”

As Singleton has proven, that gratitude works both ways.