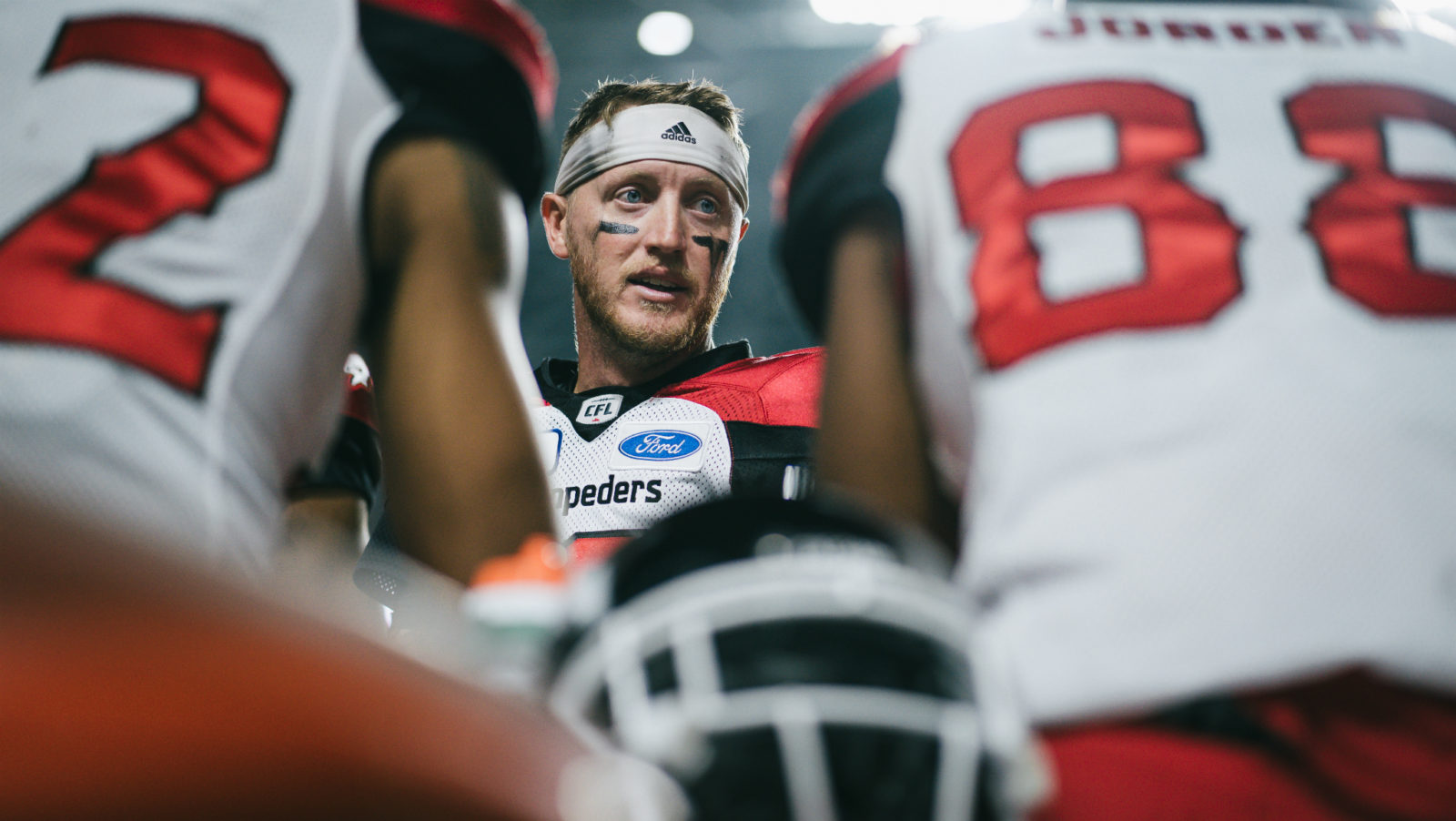 lmost 24-hours after signing a new contract with the only team he’s known in the CFL, you can hear the relief in Bo Levi Mitchell’s voice.

“It was more stressful than I thought it was going to be,” Mitchell said, the process now behind him and a four-year, $2.8 million deal in front of him.

It was the 28-year-old’s first venture into free agency in the CFL. It was a fun experience, he said, but he felt the burden that comes with being one of the top free agents in the market.

“The toughest part about being a quarterback is it’s one of the bigger contracts,” he said.

“You realize you’re holding up a lot of people being able to sign. I had a lot of guys (over the last few months) at the Stamps hitting me up; players on other teams trying to get me to come to their team.

“It’s stressful, man. You realize how many people your decision impacts but you’re trying to make the best decision for you and your family, for your legacy, for winning and everything.”

In the few hours he was on the market, Mitchell had his suitors. Saskatchewan and Toronto came calling and made great offers. But he promised the Stamps that he’d give them a shot to counter the best offer he got and team president and GM John Hufnagel did just that.

Mitchell went into details on the offers, why he chose the Stamps and what a West Division that’s loaded with QB talent might look like in 2019. This interview was edited and condensed for clarity.

Chris O’Leary: As you were entertaining offers, could you really picture yourself anywhere else?

Bo Levi Mitchell: I think I was trying to, to try to help myself imagine it. It’s not easy. I’ve only seen myself in one jersey and you learn to hate all the other teams, so yeah it was definitely hard to imagine it, but it was fun. It was a fun experience and I’m glad that we ended up in a place that we love and a place that we’re happy.

CO: Jim Popp was on the radio in Toronto Wednesday morning and said he offered you a half-million more than what Calgary did. Is it hard to leave that much money on the table?

BLM: It is, but the decisions aren’t all about money. The other offer (from Saskatchewan) was good as well. The tax bracket we’re in as quarterbacks, we get taxed at 50 per cent. So you kind of take that (offer) with a grain of salt. Everything you look at with teams contracts, $50k more per year is really $25k more in my pocket. There are a lot of sponsorships and things here (in Calgary) that I have a very good relationship with and that kind of came into play as well. So I was trying to weigh those things out. It’s hard to turn down that kind of money, but it’s a team you’re not familiar with. I wasn’t sure about the pieces that they had are in place yet — not to say that they won’t be successful over there — but I was more comfortable with the GM and head coach that I had and knowing our offence and what I can continue to help do with it.

BLM: I think they offered 750 (thousand) in the first year and then basically going up by 50 (thousand) every year for however many years I wanted to sign for. It could have gotten ridiculous. But at that point, you don’t know if Popp tries to re-sign you to a different contract, renegotiate (later in the deal). Those numbers are all kind of fluff until you actually get to that year, every year.

CO: You signed your last deal when you were 24. You’ve grown a lot in that time. Would the younger you, 24-year-old Bo, have jumped at that kind of offer and made the move?

BLM: I wish I could go back in time and ask him (laughs). Maybe at that point, not having a family yet, it may be easier to move around and take chances, things like that. I’m always focused on legacy and trying to become one of the best players that’s ever played up here. When it came down to it, I talked with my wife Madison and Calgary gave us that chance better than anyone else did. That kind of made the decision for us.

CO: What’s legacy mean to you? Are you thinking about things like chasing Anthony Calvillo, setting passing records? What do you look at when you talk about legacy?

BLM: For me it’s championships. Championships first, then you can go to individual accolades. To me, I want to continue to chase championships. Tom Brady…he’s been in nine championships in the last 18 years. It’s a ridiculous number and something I’m trying to emulate. I think if you’re doing that, if you’re getting championships that often, the numbers, the passing records and all that stuff will come with it.

That’s how I’ve viewed my career so far. I worry about winning games and with winning comes a lot of other things. That’s kind of what I see. But you can tell Anthony I’m coming after that number, too.

CO: How big a part of your future will Dave Dickenson be?

BLM: (Dickenson as head coach) came into a big part of the decision. That’s not just as a player but the possibility of being a coach as well, whenever I’m done playing. I just wasn’t sure if that was a bridge that I was willing to burn (in leaving Calgary). Whenever I’m done playing football my passion is going to be coaching. I know that Dave’s a guy that’s going to be going places and that’s not a bad person to be learning from for a long time. As much as I can learn from him and Huf I can continue doing that and continue to build my career as a player.

CO: Did you talk with Mike Reilly on Tuesday?

BLM: Mike and I talk a lot. We continue to talk about the fact that (free agency) is going to change the CFL landscape and how fun these next couple of years are going to be. He texted me in the morning and we were talking, saying, ‘Enjoy the process. It’s going to be a fun time no matter where we end up.’ I think we’re both excited to take these next steps in our career and look back on everything we’ve accomplished in the last couple of years.

CO: What was it like to be a part of such a big day and to just watch all of those signings unfold on Tuesday?

BLM: It was definitely crazy, knowing that this was a very unique year in the sense of the CBA happening and how many free agents would affect the entire league. It’s kind of interesting to find out (how it unfolds). As soon as Mike signed you’re hearing rumours about Trevor going to Edmonton. You’re thinking that’s a lot of the top quarterbacks in the West and that’s going to create some hectic times.

Mike and I were talking about how we wish it was one division. Me and him have had so many discussions about how we have wanted to play each other in the Grey Cup. We’re not getting that opportunity because there are two divisions and nine teams. It’s disappointing, to us.

CO: The West was so tough last year and Trevor Harris going to Edmonton makes it a lot tougher.

BLM: I think Trevor moving over helps push that discussion. It’s not to say the guys in the East aren’t great — they beat us in the Grey Cup two out of the last three years — I’m not trying to say that. I just think when you put pen to paper and look at the teams and people project things…everyone sees one team running the East and a dogfight in the West.

Me and Mike were saying, I mean it’s all speculation because you don’t know (how the future unfolds) but we’ve had kind of the No. 1 and No. 2 teams the last couple of years. Our chances of being No. 1 and No. 2 and both having a bye and saving our bodies and how much buzz it would create. Going to the Grey Cup and us two playing each other and how fun that would be. It’s just speculation, nothing that can be taken too seriously but I think it raises an interesting question.