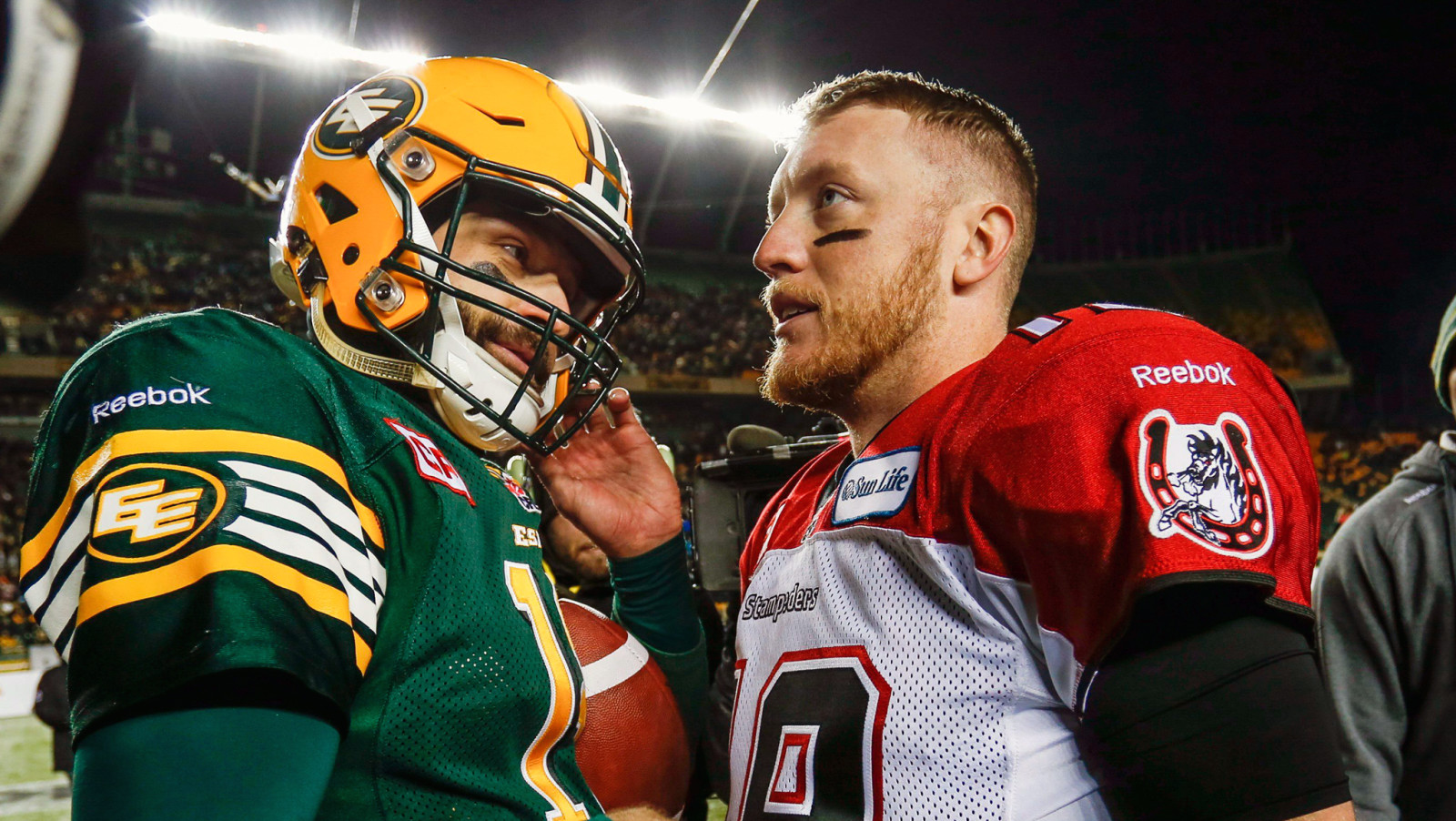 They’re bitter rivals on the field and are unquestionably the CFL’s top quarterbacks, but Mike Reilly and Bo Levi Mitchell don’t let a professional rivalry affect their friendship. Not only is there an immense amount of mutual respect, but Reilly and Mitchell are good friends off the field.

The pair shared an important connection this off-season, too. The playing futures of Reilly and Mitchell defined an unprecedented 2019 CFL free agency period and set a brand new market for their position. Yes, one changed teams and the other stayed put, but the parallels this winter were striking.

“I kept in pretty good contact with Bo throughout a lot of the off-season,” Reilly told me last week. “I was obviously curious to see what he was thinking and we had some interesting things come up in terms of us both working out for Jacksonville within a day of each other.

“I’d been asking him how the workouts had gone a couple weeks before and picking his brain a little bit. Then the first thing I did when I was finished with my workout in Jacksonville was, you know, I texted him about how it went and told him what to expect when he got in the next day.

“We stayed in close contact throughout a lot of that process as free agency came closer. We were talking a decent bit about, you know, what we were each thinking and how crazy it was going to be, if there were changes in terms of how the league was going to go, and stuff like that.”

You can understand why there was so much dialogue between the two leading into free agency, even without the very cool NFL connection. Reilly and Mitchell, along with Trevor Harris, formed an elite trio of free agent quarterbacks that all became free agents at the same time. That wasn’t a coincidence.

“We’re all represented by the same group,” Reilly said. “Me and Bo are represented by Dan Vertlieb and Trevor by his partner. We all, when we signed our contracts, knew when the CBA was expiring and knew that we didn’t want to be locked into something when that CBA expired.

“Knowing there was going to be a lot of movement around the league, we wanted to be able to sit back and kind of, you know, take it all in and make sure that we had the ability to make the right choices for us individually. That in and of itself created a bit of a jump in the market for our position, just with everybody’s contracts expiring.

“I think all three of us, or even the other quarterbacks around the league, I think in general were all looking at the other guys at our position and trying to figure out where everybody was going to land and what the market value was going to be and things like that. We were all aware of what was going on and tried to keep tabs on it there’s no doubt.”

In the end, Reilly signed with the BC Lions, which left a void in Edmonton. Harris almost immediately filled that void, as he signed with the Eskimos minutes after Reilly’s deal was made official. Mitchell, on the other hand, decided to stay in Calgary after reportedly weighing options from Saskatchewan and Toronto, along with NFL offers.

But you can chalk up 2019 free agency as a win for the quarterback fraternity. Whether it was intentional or not, a new salary bar was set, as all three of Mitchell, Reilly, and Harris cashed in on their leverage. In the process, all three helped changed the landscape of the West Division. Not bad for the span of, oh, 16 hours or so.

Speaking of Bo Levi Mitchell, his decision to remain with the Stampeders wasn’t an easy one. Knowing how much success he’s had with Calgary, and how much success they’ve had as a team, it was going to take significant offers elsewhere to not make staying a slam-dunk.

Mitchell had offers from the NFL’s Denver Broncos, Indianapolis Colts, and Minnesota Vikings to weigh before deciding staying north of the border was the way to go. Once that was declared, the Riders and Argos made massive overtures in an attempt to woo Mitchell away from an ideal situation, making things even more difficult.

After some internal discussions, the Stamps came up with an offer that worked for them and was fair for Mitchell and their relationship will continue for four more years. Sure, despite having the credentials, Mitchell isn’t the highest paid quarterback in the league, but that wasn’t the only thing important to him.

Mitchell has played in one city during his professional career and has made a huge impact in Calgary, both on and off the field. The on-field stuff is easy to quantify, from Grey Cup appearances and titles to a pair of Most Outstanding Player nods.

Mitchell’s work in the community is worthy of mention, too. From Mitchell’s Miracle Day to his work with Big Brothers Big Sisters, he has gone out of way to use his significant profile in the city to truly make a difference. It’s all part of building a legacy for Mitchell, which was one of the biggest reasons for his return to Calgary.

“I think the legacy part, you know a lot of people start putting numbers and things like that about accolades and trophies,” Mitchell told me last week. “I’m thinking of it more from the standpoint of a (Stampeders legend) Herm Harrison and (Calgary Flames legend) Lanny McDonald.

“Guys that have cemented themselves in the Calgary community, you know, throughout their time here. (They) have the respect of the city and they can go anywhere and say hi to a person and they know who they are. It’s an exciting time to truly make Calgary our home and commit here for the next four years.”

Mitchell may already lay claim to the greatest quarterback tenure in Stampeders’ history. If he doesn’t right now, though, it’s almost certain he will when this contract comes to an end. Mitchell’s regular season 69-15-2 record is ridiculous, while he has four Grey Cup appearances and two titles to his name as a starter.

Even if Calgary doesn’t pace the league for the entire duration of the next four years, Mitchell is only going to add to some, if not all, of his accomplishments. The Stamps have churned out some great quarterbacks in team history, from Doug Flutie to Dave Dickenson, Jeff Garcia, and more.

The one thing Mitchell has on all those guys, though, is longevity. At the end of this four-year contract, he will have spent 11 seasons in Calgary. In terms of building a legacy, it doesn’t get much better than that.