Ferguson: Pipkin could be the answer in Montreal

Ferguson: Pipkin could be the answer in Montreal

MONTREAL — With Johnny Manziel out of the Montreal Alouettes’ quarterback situation, what’s next behind centre for the Als?

Manziel was released in a sudden and stunning move Wednesday that was mandated by the CFL after he contravened the agreement which made him eligible to play in the league at this time last year.

For CFL.ca’s Marshall Ferguson, however, Manziel’s release may not change much for the Alouettes.

“I actually don’t think the Alouettes are in a bad situation when it comes to their quarterback play,” said Ferguson. “I even thought Antonio Pipkin would likely be the starter going into the regular season.”

Pipkin’s name has been heard all off-season, as the 23-year-old was expected to compete with Manziel for the starting job in training camp. A 6-foot-3, 225-pound prospect out of Tiffin, Pipkin temporarily took hold of the job last season, leading the Als to back-to-back wins over Toronto and Ottawa after Manziel was injured.

Manziel reclaimed the job for the final six starts of the season, but Pipkin remained involved in the Als’ offence, both in short-yardage situations and in the second half of games.

“I genuinely think that Antonio Pipkin gave them the best shot to win going into 2019,” said Ferguson. “It’s a huge year for him because for three or four weeks in 2018 he showed the ability to be a game-changer and make that franchise better, then he fell off the cliff with his in-game performance and his accuracy and if he can just find a way to harness that, he’ll be able to make them a contender in the East Division until Labour Day.”

Despite showing progress throughout his first CFL season — Manziel finished the year with a 5:2 touchdown to interception ratio in his last five starts — the production on the field never did match the hype. The former Texas A&M star and Heisman Trophy winner leaves the CFL with 1,290 passing yards, five touchdowns and seven interceptions, to go with a 2-6 record over eight starts.

“The name notoriety of Manziel never connected with the production on the field in the CFL, that’s just the fact,” said Ferguson. “The best game he had was not even up to snuff with a Mike Reilly or a Bo Levi Mitchell subpar game.

“In the big picture, I look at it for Montreal and say there’s work to be done. Not having the draft picks is going to hamper them. But they’ll be able to work around that whether it’s through free agency or recruiting otherwise.” 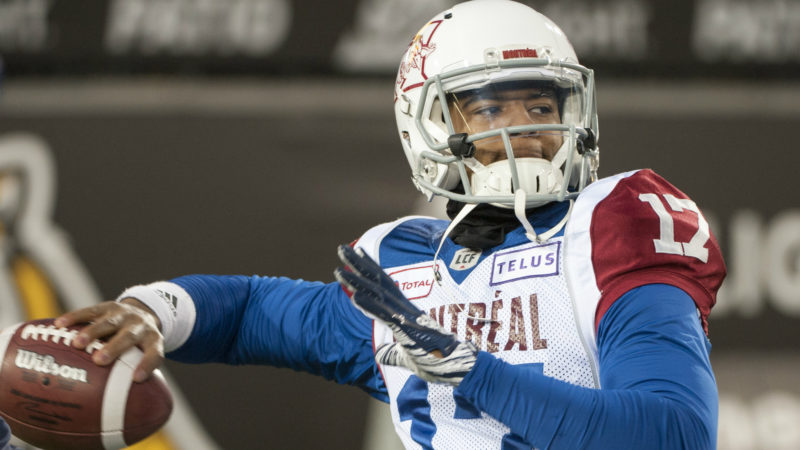 Despite showing off a strong arm and ability to make plays with his legs, Pipkin isn’t fully polished as a CFL quarterback prospect, finishing his second professional season with just three passing touchdowns and eight interceptions. He’s joined by Vernon Adams, Jeff Mathews and Matthew Shiltz as potential Alouettes starters in 2019.

As for Manziel, Ferguson calls his departure a disappointing ending roughly nine months after arriving amid so much fanfare — first with the Ticats, then with the Alouettes.

“Whether it was him walking over from the dorms at McMaster University or him stepping on the football field and warming up, the cameras were pointing his way,” said Ferguson. “He certainly moved the needle, he certainly drove interest in Hamilton even at a time when he didn’t take meaningful snaps.

“We will never get to see where that journey ends. Whether you liked him or hated him, everyone was willing to give this a look and say ‘let’s see what happens’, and now we don’t even get the ending to the movie of what could have been. It’s just a mystery and a big question mark that will linger over Johnny Manziel’s time in Canada.”