Going on nine years later, Travis Lulay can still take you through the play by play of the final moments of his first start in the CFL.

He’d played well, overall. He made 26 of 40 passes for 330 yards in a game where his BC Lions had opened up a 17-3 third-quarter lead on the road in Toronto.

“The game started off with a bang,” Lulay said, in the tone of a 10-year CFL vet. “Then, as CFL games go, all of a sudden it’s a close game in the fourth quarter.”

The Lions were up 20-17 and had the ball with just under three minutes to play. On second and six at his own 34-yard line, Lulay looked to his right and threw to Manny Arceneaux on the sideline.

“I didn’t make a great throw and I remember I got hit when I was throwing it,” Lulay said.

“I was like, ‘Oh boy, I hope that gets there.’ Then I heard the crowd at the SkyDome and it was the wrong people cheering. I’m on my back and I’m kind of looking through my helmet. I see Byron Parker, who was later a teammate of mine, scored.”

Just 26 then, Lulay remembers teammates telling him in the locker room to shake it off, that they’d get the next one. They didn’t. They lost their next two games with Lulay starting.

“So now I’d lost three games as a starter and Wally (Buono) threw Jarious (Jackson) back in before our bye week and I kind of got sat down,” he said.

“I remember Wally talking to me at the end of that three-game stretch and he said something to the effect of, ‘Trav, I hope you were born in the school of hard knocks, eh?’

“I got it. He was just saying, ‘I hope you’re mentally tough. We still think you can play but you’re going to have to be tough enough to not let this bother you.’ And sure enough later in the year I played well, the team played well and that kind of catapulted us into the 2011 season, which was the storied season of my career.”

Lulay announced his retirement on Thursday, cementing his place as one of the Lions’ all-time great quarterbacks. He finishes his career third in all-time passing yards (21,352), pass attempts (2,613), completions (1,658) and touchdown passes (127).

Most important to him, as he said, was that Grey Cup-winning season in 2011. That team’s story will live on forever. Their 1-6 start was erased with an eight-game win streak and a first-place finish in the West Division that earned Lulay a Most Outstanding Player award. Those Lions finished 11-7, stole the swagger from Winnipeg’s Swaggerville squad in the Grey Cup and won at home in front of a sold-out crowd of 54,313 fans at a freshly renovated BC Place. Lulay picked up game MVP honours as well.

“You play to win a championship,” Lulay said. “That was the one season at the end where you feel really good about it, when you’re a starter on a championship team.

“That was the most fulfilling one. It was just special because we started 0-5. Everything happened so fast and furious. You’re just fighting to get out of the basement and all of a sudden we’re back in the hunt. Then boom, we win the West, we almost won out.

“We moved into BC Place that year and the Grey Cup was in Vancouver, so there was all this pressure to get into the Grey Cup as the host city. It all just kind of happened at once, really fast. I was awarded the MOP that year and all that. That will be the most memorable season.” 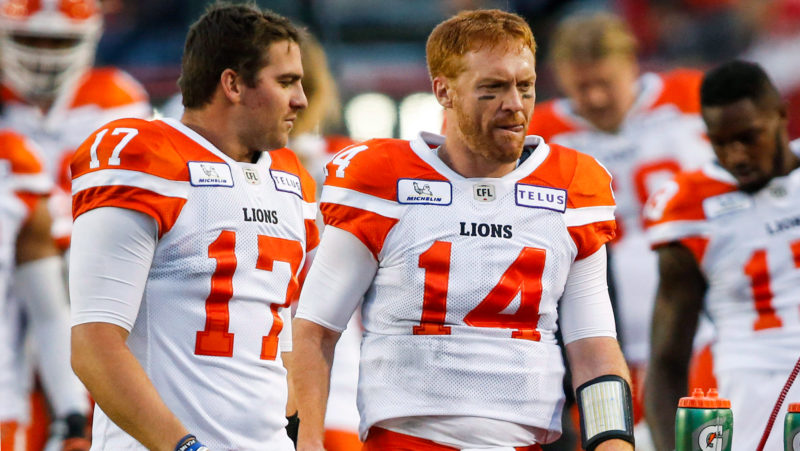 Lulay will be celebrated for leading that team to its historic run and for all of the success he had in the Lions’ orange, but the underlying theme of his career is how he handled the adversity that seemed to always come looking for him. He shook off his 0-3 record as a starter. Months later, when the walls were closing in on that 2011 Lions team as it fell to 0-5 and 1-6, he never flinched, never stopped believing that his team had something. When injuries piled up on him between 2013 and 2018, when Jonathan Jennings appeared to supplant him as the starter, he stayed his own course and supported the young QB from the sidelines.

“I don’t know. I’m kind of an eternal optimist,” he said of how he assessed that 0-5 hole he and his teammates were in. It could apply to a lot of the later moments in his career, when the injuries looked bad enough to make you assume that this would be it, that this newest one would be how it ended for him.

He’s gone through multiple shoulder dislocations, getting surgery on his throwing arm twice earlier in his career and opting to rehab the injury on its own later in his career. A knee sprain opened the door for Jennings in 2016 and halfway through the 2017 season, after Lulay had taken the starting job back, he blew his ACL. He returned for Week 5 in 2018, regained the starting job and dislocated the shoulder in his non-throwing arm. He was still back on the field for Week 18 to help the Lions clinch their unlikely playoff berth.

He said he actually feels physically better now than he did a year ago and that he’d been told his knee wouldn’t feel all the way normal in that first year. But when this past season ended, he sat down with Buono and GM Ed Hervey for his exit interview and told them he wasn’t sure about what his future would look like.

“The physical and emotional toll of doing everything I needed to do to be out there, it just kind of wore on me,” Lulay said. You’re drained at the end of a season no matter what, but the end of the 2018 season felt different for him.

“I sat down with Wally and Ed after the season, both of them said to take your time, your body will tell you. I wanted to wait. I wanted to be sure. I don’t want to say I’m retiring and get into the spring and go, ‘Oh man, what am I doing?’”

Images: Travis Lulay through the years

He entertained a few offers in free agency, but there wasn’t a scenario that sparked something in him. After all of the highs and lows of a decade in the CFL, he’d made up his mind.

“You don’t always have that at the end, the option to continue if you choose to. Maybe that was the thing I needed, was just knowing that even when I still have the option to play the feeling was still strong to be done.”

He looks back on a decade in Canada, on two years in the NFL, some time with NFL Europe, on offers to play in the Arena League and he realizes that he was lucky to have a strong support group to help him navigate those difficult decisions. He thinks of his wife, Kim, and how easily she could have said she’d had enough of what he calls “the suitcase life” early in his career. She never did, though.

Then there are the relationships forged in BC. He called Buono this week to tell him that he’d be following him in retirement.

“I worked with Wally for 10 years and some of my best friends are teammates and guys I’ve gone to work with,” Lulay said.

“That’s my biggest takeaway from football. It’s just given me an opportunity to make some really cool relationships in my life and strengthened the ones I had before. I lived out some pretty fun experiences and getting to see parts of the world that I may never have had I not gone on this football journey.”

He feels better about leaving the Lions knowing that Mike Reilly, one of his closest friends and his backup on that 2011 Grey Cup-winning team, will take the reins as the starting QB.

“It would be hard for me to be retiring, which I would be doing, if the Lions didn’t have a quarterback lined up,” he said. “I’d be conflicted about it, but the fact is that they’re in good hands.”

He doesn’t know exactly what’s next for him, but ever the optimist, Lulay sees that as a good thing.

“I spoke with Wally the other day and let him know that I was going to retire,” Lulay said.

“He said, ‘Trav, don’t rush into anything. Take your time, pray on it. It’ll always be better when you don’t dive into the first thing. Take a little bit of time to survey the landscape and you’ll know what you want to do.’

“Just the rhythm of life to this stage, this has always been the off-season time of year, so that feels comfortable. That’s how I’m approaching it.”