VANCOUVER — Travis Lulay‘s decorated football career has come to an end after the BC Lions’ quarterback announced his retirement on Thursday.

Lulay spent his entire 10-year career with the Lions, starting 81 games and throwing for 21,352 passing yards, good for 33rd on the all-time list and third in franchise history. The 35-year-old compiled a 48-33 record in his career, throwing 127 touchdown passes and completing 63.5 per cent of his attempts. A dual-threat pivot, Lulay added another 2,148 yards and 23 touchdowns on the ground.

A Montana State grad who went from a Portland free agent camp in 2009 to become the CFL’s Most Outstanding Player and a Grey Cup MVP in 2011, Lulay departs the CFL after 146 regular season games in total. He was also a two-time West Division All-Star, in addition to his CFL all-star nod after an historic 2011 campaign.

Overcoming tremendous adversity numerous times during his tenure, Lulay threw for 300-plus yards 19 times during his career and led the Lions to 13 game-winning fourth-quarter drives. Easily one of the Lions’ most popular players in their 65-year history, he enjoyed a winning or .500 record against every other team in the CFL.

Often performing his best in an always-tough West Division, Lulay went 9-4 against Saskatchewan, 9-5 vs. Edmonton, 6-4 vs. Winnipeg and 7-6 against Calgary. 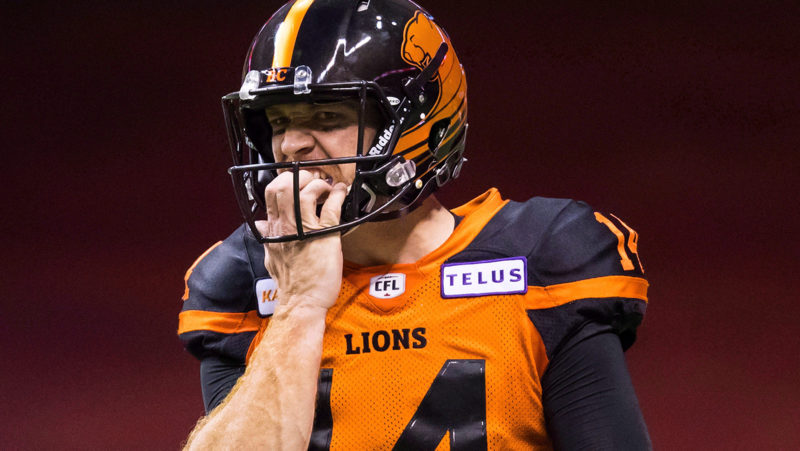 For Lulay, 146 career games didn’t come easy. After emerging as one of the CFL’s best quarterbacks, a shoulder injury hampered him late in the 2013 season, eventually leading to surgery. The resulting rehab sidelined him for all but two games in 2014.

In 2015 Lulay faced a new challenge in his career, tearing his MCL in a game against the Montreal Alouettes. With the emergence of a budding star in Jonathon Jennings, Lulay recovered and became a backup in 2016, extending his stay with a two-year contract through 2017.

Jennings had his ups and downs in his young career as a starter, and in 2017, in an early-summer game against the Hamilton Tiger-Cats, Lulay entered the game in the first quarter for an injured Jennings to set a new CFL record with 436 yards off the bench. The Lions blew out the Ticats 41-26 and while Jennings would return weeks later, Lulay would eventually re-take the starting quarterback job in BC. It was short-lived, as a torn ACL would end Lulay’s 2017 season.

After signing a one-year contract extension before free agency, Lulay rehabbed his injured knee and took over for Jennings again in Week 5 of the 2018 season. Despite being sidelined with two separate injuries thereafter, the veteran pivot helped the Lions get back to the post-season, finishing 9-9 en route to an eventual loss to the Ticats as the crossover team in the Eastern Semi-Final.

Lulay finished his final season with 2,494 yards, 13 touchdowns and 11 interceptions, and while his 60 per cent completion rating was the second-lowest of his career, he still managed wins in half of his 12 starts.