Ferguson: Looking back on Manziel’s time in the CFL 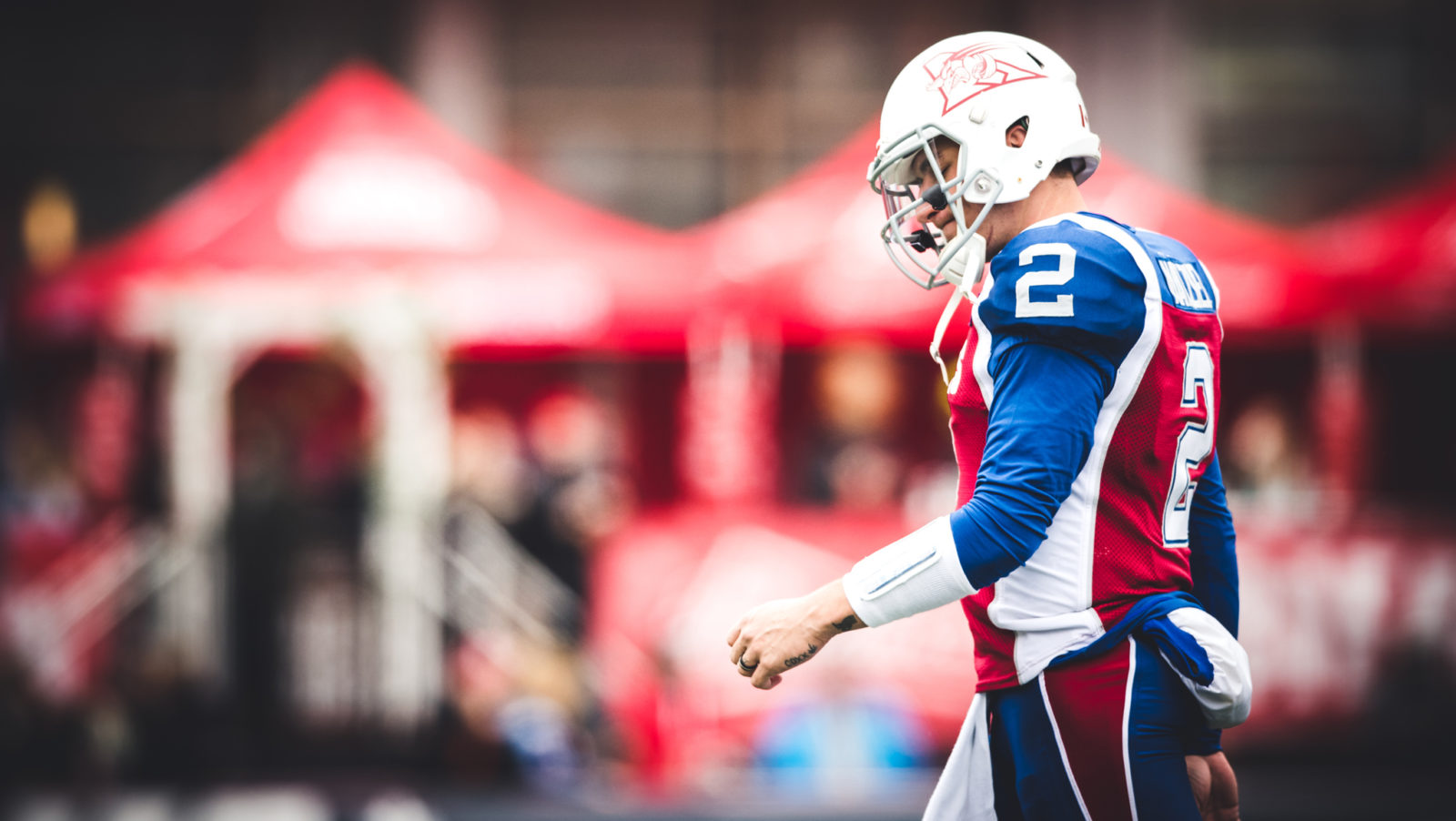 Ferguson: Looking back on Manziel’s time in the CFL

That’s it. It’s the end of Johnny CFL.

It came abruptly to many fans, even if you believed – quietly or aloud on social media – that Manziel was not here for the long haul. For the last couple of days I’ve seen everything from “this is sad, he would’ve been great” to “good riddance, who cares”.

In all honesty, I do. Manziel was the most dynamic collegiate football player of my young life and he did it at a time I myself was still playing university football in Canada. By now we all understand the background on Manziel’s struggles off the field, but every time I hear the name Manziel, like many of you I flash to a different time when – just seven years ago – he was outrunning player after player in the most athletic conference in the NCAA.

I never stop wondering how.

How did we get here, to the point where Manziel is not only no longer part of the Canadian Football League, but was an afterthought while entrenched in his one and only CFL season. 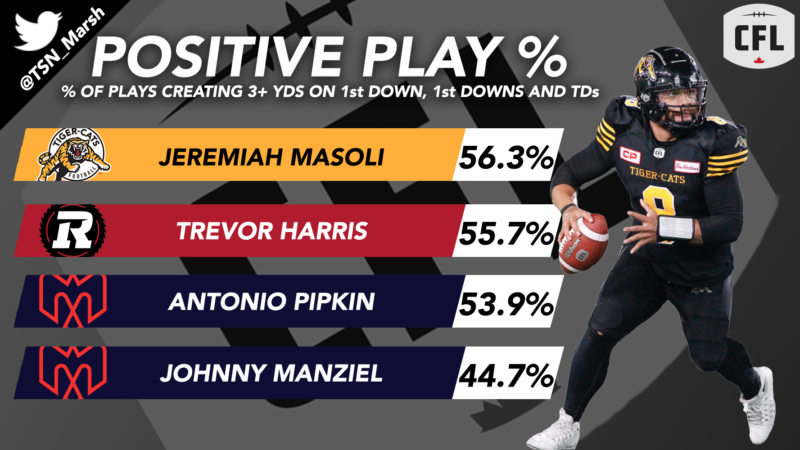 I set out to answer a couple questions with Manziel’s time north of the border come to a close, the first and most important in my mind being who was Johnny Manziel as a CFL player.

To put it as simply as possible, Manziel’s time in the CFL is defined by three things. All three, as you would expect in the game of football, are directly affected by his Alouettes surrounding on a five-win football team, but nevertheless these three trends dominated his time in Montreal. 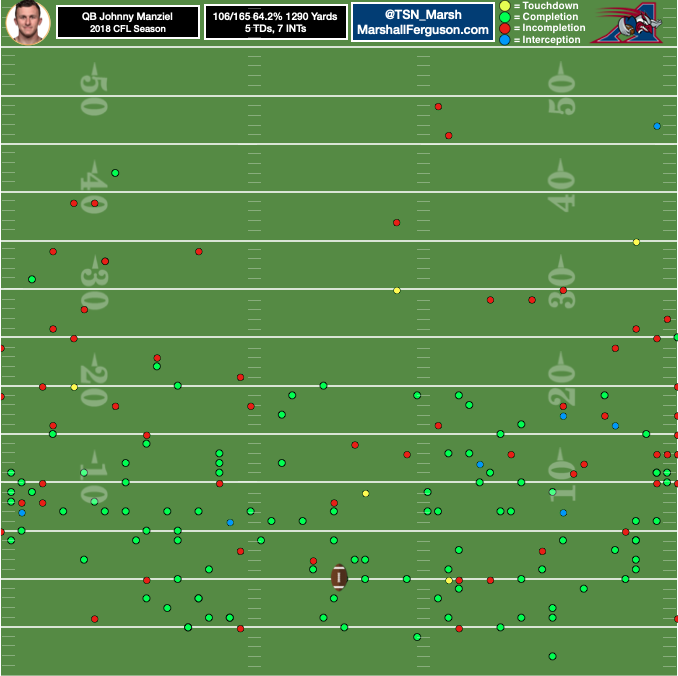 Johnny was a scrambler on called pass plays the likes of which the CFL hasn’t see in recent years.

Johnny threw a lot of check downs, be it due to discomfort adjusting to the CFL game or an evolving Alouettes offensive line which forced him to find targets quicker than his usual standard.

First the scrambling. We all believed that Manziel would bring that Flutie-esque style to the wide field. It’s the tried, true and tested take which all American gas bag radio hosts rely on when suggesting a quarterback who can’t seem to make it in the NFL.

True to form Manziel became the pocket breaking juke machine we all remembered, but with minimal success at the end of each adventure. 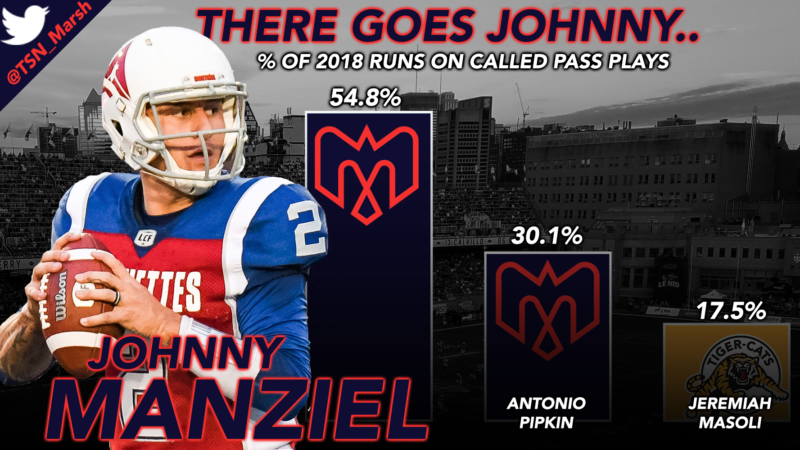 Manziel’s willingness to scramble away from pressure was no surprise. It’s an innate part of his game that has always set him apart when he created big plays but in the CFL defensive coordinators consistently found ways to turn Johnny’s escapades into short lived east-west jogs. 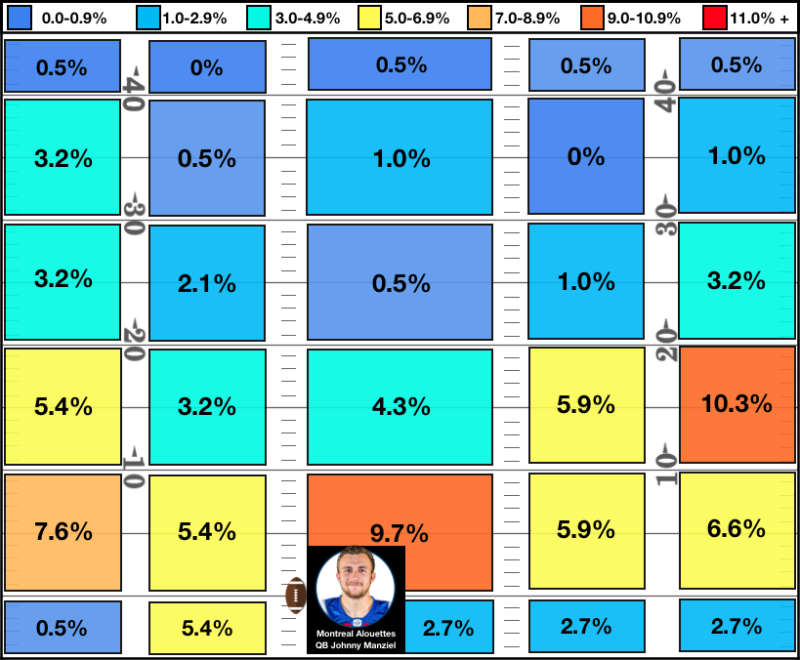 Manziel spent much of his time in Montreal evading pressure and trying to create, which led to predictable results of a high check down zone attempt percentage and a higher than normal strong side target percentage.

Quarterbacks with pressure in their face are – of course – more likely to take what’s in front of them and Manziel favoured his vision’s right side while in the CFL at a relatively high rate. Compare the hot spot completion percentage chart of Johnny below to that of his former teammate in Hamilton Jeremiah Masoli from the same year and you’ll see what I mean: 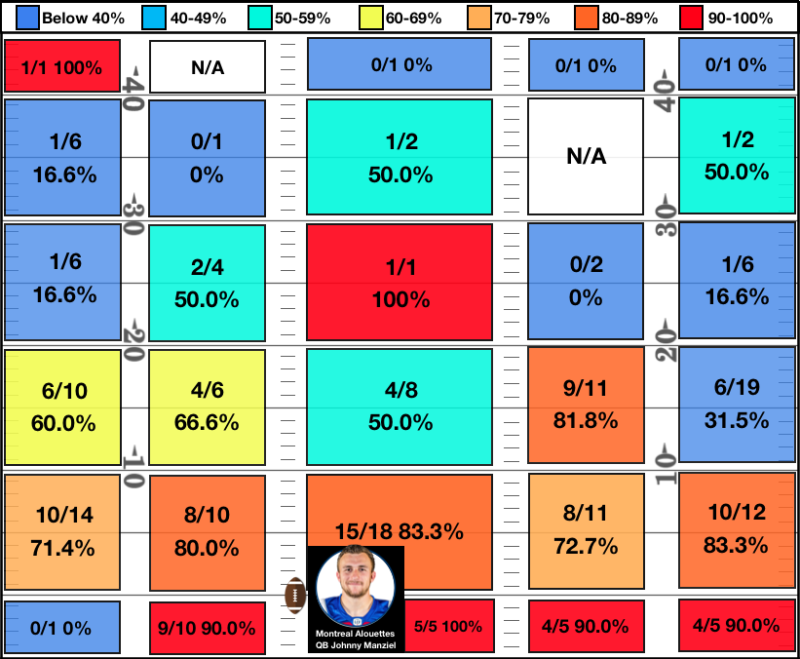 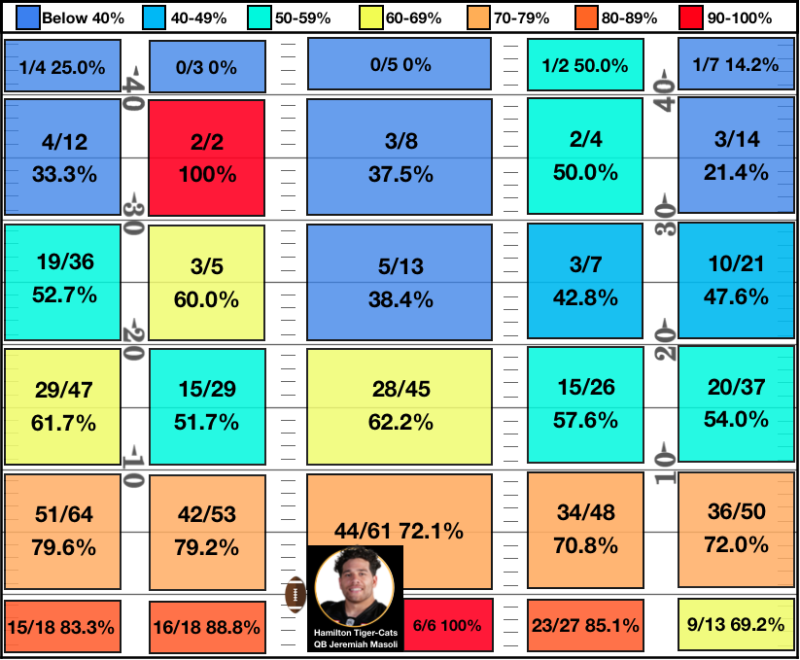 Johnny didn’t open it up much while up here but when he did the results were anything but ideal for Alouettes fans. Here’s how he stacks up against notable CFL East Division quarterbacks in 2018 when keeping it conservative. 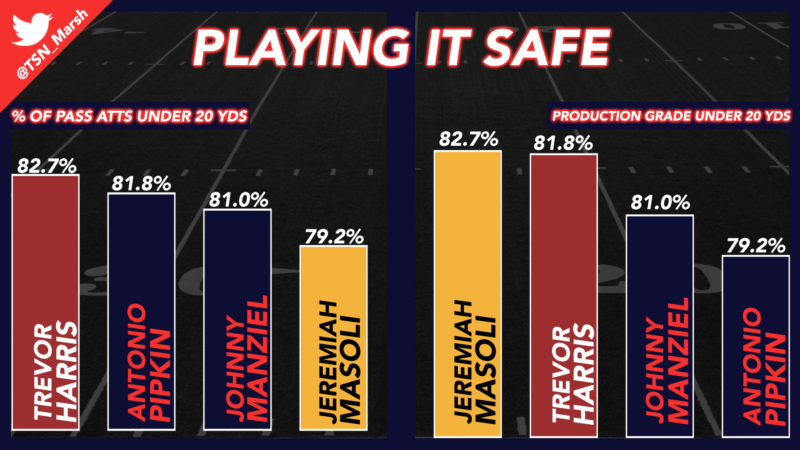 Due to the pressure or some other unforeseen circumstance both Pipkin and Manziel attempted an alarmingly high rate of passes under 20 yards, to the point they nearly surpassed the ball control, high volume, high efficiency passing attack of Trevor Harris and the Ottawa REDBLACKS last season.

Manziel actually had the same accuracy grade on passes under 20 yards in the air as Harris (68.0%) which might be an interesting discussion for another day, but the real note on the short yardage passing attack for Manziel’s time in the CFL is the lack of production he got out of it compared to Masoli and Harris shown above.

The third trend for me of Manziel’s time in Canada that stood out was an inaccurate deep ball and the resulting lack of production from vertical shots for Montreal. Having older receivers like Ernest Jackson and Adarius Bowman certainly doesn’t help but one would have to think with BJ Cunningham and Geno Lewis last year Manziel would have completed more than FIVE passes beyond twenty yards in the air last season, but that’s the number he barely reached in the Week 21 finale of his CFL career. 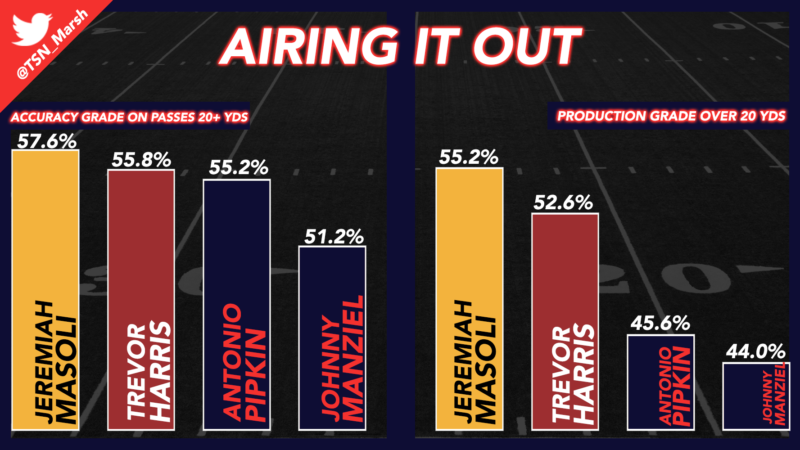 The funny thing about Manziel is that we kept waiting for the moment of brilliance. All the hyperbole and expectation that came with his Canadian arrival never played out.

Except for a three-play stretch in what was widely deemed his best CFL performance – which came in a loss to Saskatchewan. If you remain a Manziel fan these three plays are likely what you’ll remember from his time in our great league.

Next he gave the classic false target to a free rushing defender before regathering and throwing what appears to be a prayer as it leaves his hands for a touchdown.

Before finishing the sequence with vintage Manziel craziness.

THAT is what anyone who was excited for Manziel’s arrival wanted, somewhat expected. It never came to be outside of that brief minute long stretch that brought Percival Molson fans to their feet in a way that just sounded and felt different because of the guy that was making it happen.

The question becomes now where do the Alouettes go from here with the starting quarterback door swung as wide open as it has been since.. the start of essentially every year since Anthony Calvillo retired? 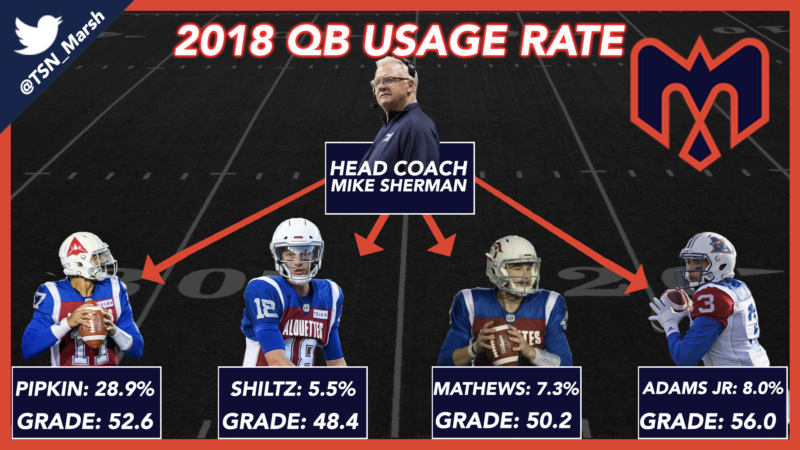 In 2018 Manziel led all Alouettes with a usage rate of 34.7 per cent followed closely by the man I believe to be the right fit for the 2019 job: Antonio Pipkin.

In 2018 Pipkin arrived like a comet on fire screaming for downtown Montreal. He grabbed your attention with heroic efforts featuring surprisingly powerful runs for a quarterback and flashes of top end touch passing, but as the weeks went on defences caught up to Pipkin and he regressed as so many young quarterbacks do in their first kick at the can. 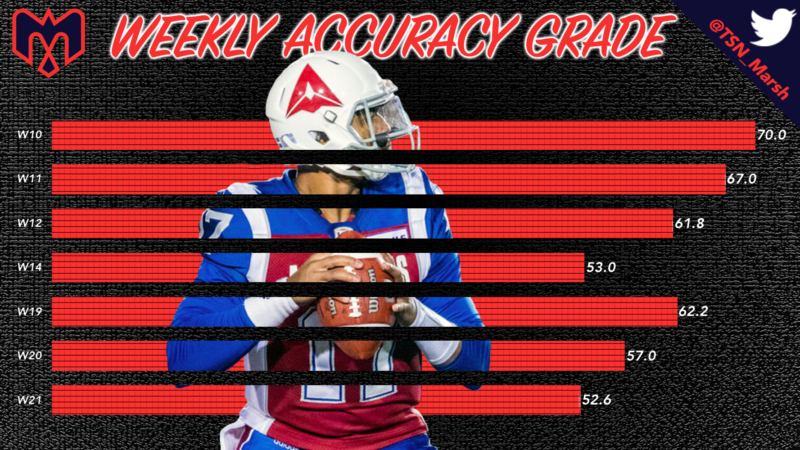 Pipkin can stretch the field, he has potential and easily the highest ceiling of all Alouettes quarterbacks on the roster – save for you diehard USPORTS fans out there that believe Hugo Richard is the answer. 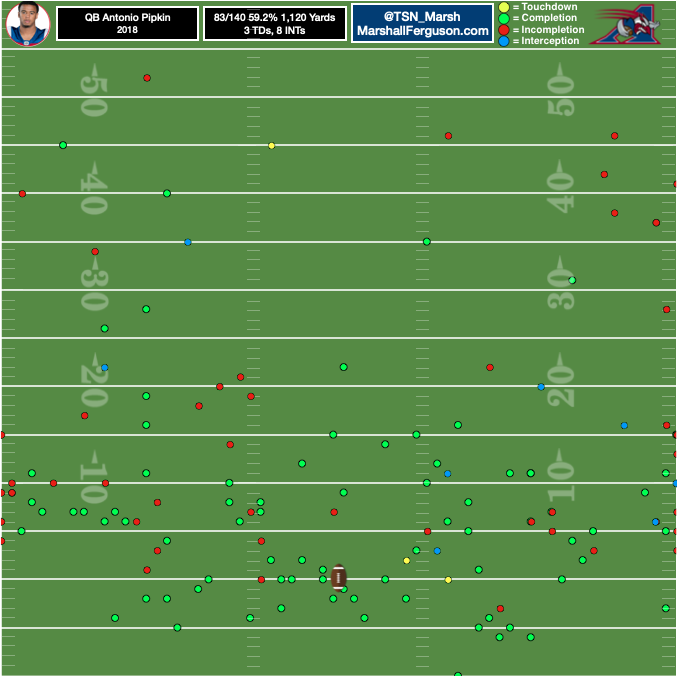 In Pipkin the Alouettes at the very least have talent and a chance to develop it coming out of an unfortunate falling out between a Heisman Trophy winner and the club. Pipkin offers stability and with patience has shown the ability to grasp CFL concepts in a way that suggests he deserves the time to get it right.

Without consistency Pipkin’s career will become just another footnote like Rakeem Cato, Alex Brink or your favourite modern Alouette passing flame out. But at the very least now he can approach his daily work without looking over his shoulder to see one of the most notable college football players in recent memory and the man who helped recruit him calling the shots ready at the smallest slip up to replace the young Tiffin grad for a bigger name.

It’s time to move on for Montreal. Pipkin is the right man to lead them into 2019. The season – I’m sure – can’t come soon enough for him, and I know I can’t wait to see what he offers up CFL fans after another year of development.