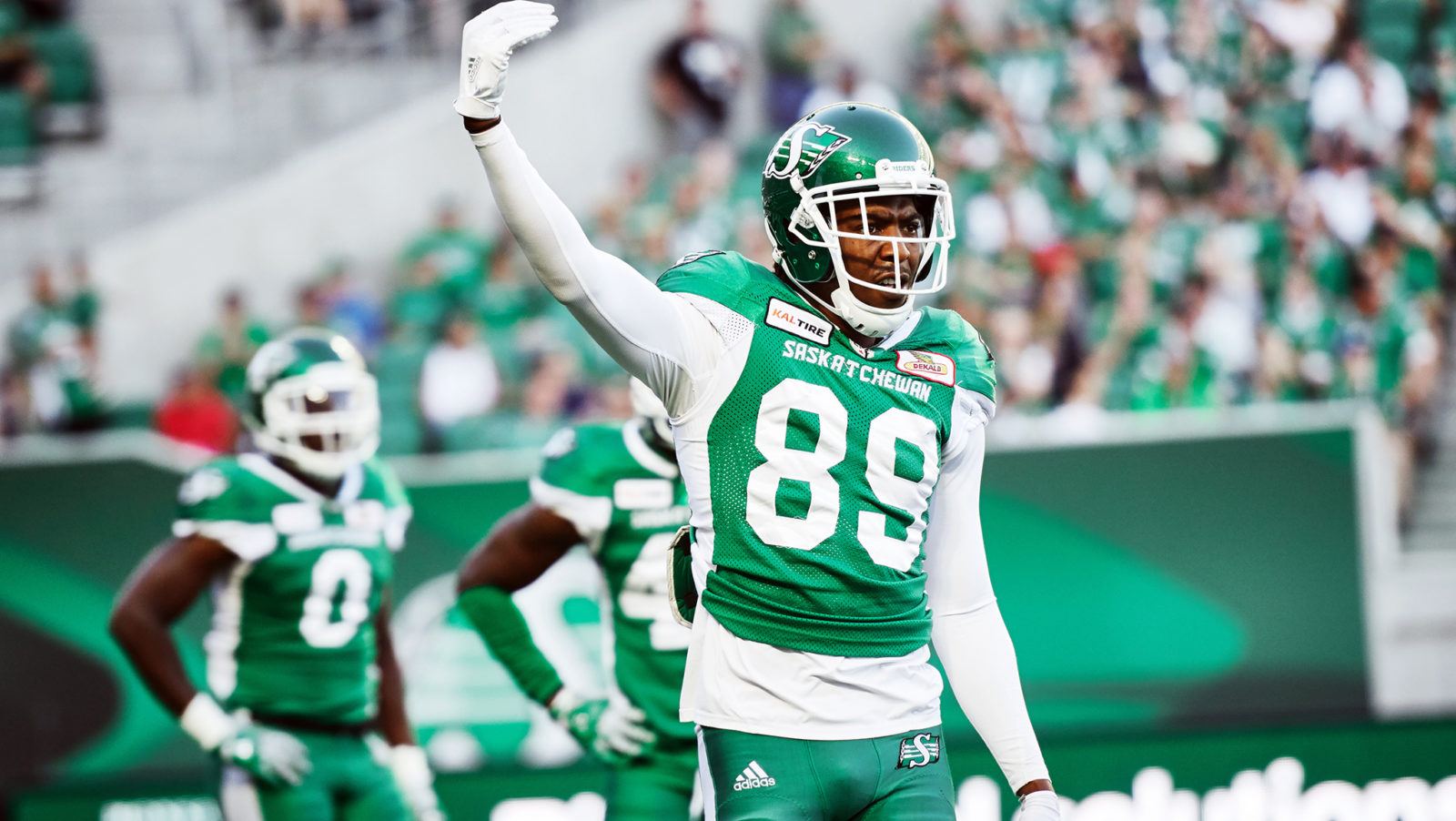 TORONTO — The schedule release back on Dec. 20 was an early holiday gift for CFL fans, who could begin making plans for another exciting season in the three-down game.

A Thursday night season-opener, a Canada Day clash in Regina and the return of Touchdown Atlantic are just a few important dates for fans to circle, with kickoff arriving on June 13 in Hamilton and the season concluding with the Grey Cup on Nov. 24 in Calgary.

After a busy month of free agency, it’s time to get out the calendars again. CFL.ca revisits the 2019 schedule and circles some of the most anticipated dates affected by familiar faces in new places.

The cat comes back

In addition to kicking off the 2019 schedule, June 13 also happens to mark Zach Collaros‘ first game in Hamilton since being traded. All of that was supposed to be out of the way last season, but Collaros never got to face his former mates thanks to an early-season injury.

After missing out on the highly-sought-after Bo Levi Mitchell, the Riders opted for another season of Collaros, signing the 30-year-old pivot on a one-year deal. Collaros still has plenty to prove as a CFL starting quarterback this season, and a return to his former home of four years is quite a place to start as Tim Hortons Field will be buzzing.

It’s time to move on

After four months to reflect, the Eskimos will have had plenty of time to move on from departed star quarterback Mike Reilly, who signed with the BC Lions in free agency. But the season-opener on June 14 will be a major milestone for Esks fans, who will get their first real glimpse of a new-look roster that includes quarterback Trevor Harris and receiver Greg Ellingson.

Reilly leaving the Eskimos was viewed as a nightmare scenario for fans of the Green and Gold, but General Manager Brock Sunderland was the busiest executive in free agency, signing several high-profile stars on both sides of the football. A win over the Alouettes would be a promising start to an exciting new era.

When Mike Reilly signed with the Lions, he was considered the biggest free agent acquisition since Doug Flutie signed with the Argos in 1996. Quite the comparison, but if anyone’s worth the hype it’s Reilly, who’s thrown for 5,500 yards in each of his last three seasons and won Most Outstanding Player in 2017.

Reilly is tasked with not only bringing a champion to Vancouver but also engaging the city and fan base in a new era of Lions football. June 15 will be an important starting point as the Lions take on a division rival in the Bombers and try to assert themselves in the highly-competitive West.

While the Riders’ early-season Ontario road trip continues, Week 2 will be a personal matter for running back William Powell, who returns to the nation’s capital to face his former team. It’s unclear how much interest the REDBLACKS showed in bringing back the CFL’s second-leading rusher in 2018, but Powell was allowed to hit the open market, where he was quickly scooped up by Saskatchewan.

Powell has been one of the CFL’s best running backs the last two years, rushing for 1,000-plus yards in back-to-back seasons, including a career-high 1,362 yards in 2018. The 30-year-old is ready to become the featured back in one of the league’s most productive rushing offences last season, and you can bet he’d like to put a dent in his former team.

There will be some hard feelings when Mike Reilly returns to Commonwealth Stadium for the first time since signing with BC. Reilly spent six seasons with the Eskimos, becoming one of the league’s biggest stars, winning a Grey Cup and becoming the CFL’s Most Outstanding Player. Either way, it’ll be an emotional night in Edmonton, as Reilly and Eskimos fans look back on his time wearing the green and gold.

Setting aside those emotions, Week 2 is expected to bring us one of the more highly-anticipated football games of the season. While Reilly will be leading the upstart Lions, Trevor Harris and Greg Ellingson look to get on the same page with Jason Maas as both clubs look for a key early-season victory. Suddenly, a BC-Edmonton rivalry could emerge in the West.

After a forgettable four-win season, the Argos have to wait a week longer than everyone else to take the field in 2019. On June 22, though, they’ll start a new chapter as Corey Chamblin returns to the sideline as head coach and several marquee free agents make their debut.

With former Argos great Orlondo Steinauer on the opposing sideline and new additions Derel Walker, Micah Awe and Tobi Antigha set to debut, there’s plenty to be excited about for an all-East clash — and one of the league’s great rivalries — on June 22 on the shores of Lake Ontario.

From new logos and uniforms to some exciting free agent additions, it’s been a productive off-season in La Belle Province. However, Alouettes fans will have to wait until Week 4 to see their team take the field at Percival-Molson Stadium, as the Als host the Hamilton Tiger-Cats in Week 4.

Recent developments put Antonio Pipkin in line to become the team’s starting quarterback, the signing of DeVier Posey adds a new dynamic to the offence and Bo Lokombo and Taylor Loffler are incoming starters on defence. Add to that some sweet new threads and there’s reason to be pumped for football on the island this summer.

After years developing into one of the best defensive players in the CFL, Micah Johnson broke the bank with the Riders, becoming one of the highest-paid non quarterbacks in the three-down game. Johnson’s impact on the field makes him worth the money, and he’ll be excited to face his former team on July 6 as new Mosaic Stadium.

While the Stamps have undergone plenty of change this off-season, the Riders have managed to keep most of their core intact, even if Chris Jones has departed south of the border. Week 4 will be a critical early-season clash between two teams planning on winning the West Division this season.

Once considered the Riders’ biggest star, Duron Carter was mostly a spectator when his Argos fell to Saskatchewan in a dramatic last-minute finish last September. You can be certain his next shot at the Riders will be different, as he’ll be catching passes from recently-signed star quarterback Mike Reilly when the Lions visit Mosaic next July.

Carter, now on his fourth team, has seen a revolving door of quarterbacks throughout his CFL career, and he’s never played with anyone like Reilly. As Reilly, Ed Hervey and the Lions put their trust in the ultra-talented pass-catcher, expect a career season from Carter in 2019 — and he’ll have something on tap for his return to Riderville, to say the least. 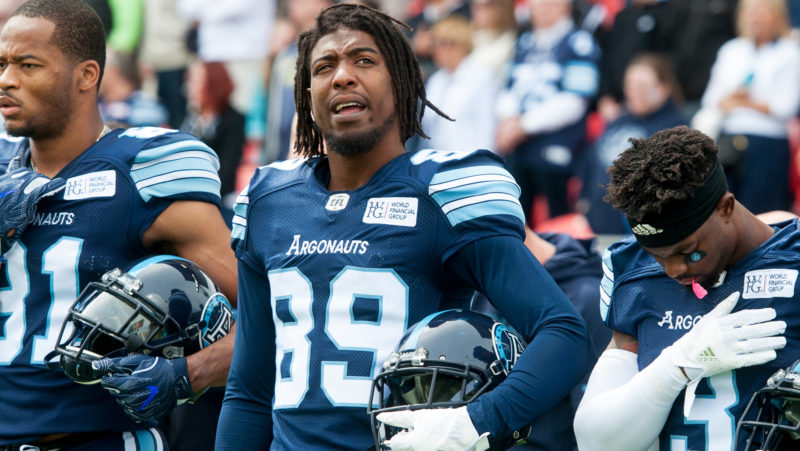 The BC Lions will be Duron Carter’s fourth team since arriving in the CFL in 2013 (Adam Gagnon/CFL.ca)

The hype has cooled off on once highly-touted prospect James Franklin, but the Argos’ quarterback is looking to start fresh in 2019 with a new head coach, offensive coordinator and surrounding cast. After splitting his two starts against Edmonton last year, Franklin joins another familiar face in Derel Walker as the two visit their former team on July 25.

While Frankin gets another chance to prove himself in 2019, the Argos’ quarterback has already had success throwing passes to Walker, the two previously forming a successful duo during their time in Edmonton. Jim Popp hopes Franklin’s re-emergence, along with a revamped defence, can be the difference for an Argos team looking to rebound and make the playoffs.

He may not show it, but REDBLACKS GM Marcel Desjardins may be a little nervous when his team travels to Edmonton on Aug. 9 to take on former teammates Trevor Harris, Greg Ellingson and SirVincent Rogers. That core group of players helped Ottawa appear in Grey Cups three of the last four seasons, and all three players will have a little extra fire to face the team that let them go.

The Desjardins way has worked up to this point, with the REDBLACKS’ front office replacing proven stars with less proven, lower-cost options that have produced at a high level. But this season will provide new challenges for Rick Campbell’s team, and the visit to Edmonton in Week 9 will be a particular challenge.

Oh, how times have changed. Last year defensive end Willie Jefferson showboated on a pick-six, receiving a thundering chorus of boos from Bombers fans at Investors Group Field. He’ll now go from hated to fan favourite in the ‘Peg after becoming one of the biggest free agent additions of the off-season.

Jefferson’s move from Saskatchewan to Winnipeg adds fuel to the fire in an already hot rivalry, as the Bombers and Riders are expected to contend for the West this season and will meet in a home-and-home starting Labour Day Weekend and culminating in the annual Banjo Bowl.

A score to settle

There’s no guarantee Jonathon Jennings will be the Lions’ starter this season, but if he has his way, a return to BC Place on Friday the 13th will be part of a resurgent season for the 26-year-old signal-caller. Once considered one of league’s budding stars, Jennings’ time in BC had a rough ending after a well-documented public spat with General Manager Ed Hervey during the 2018 season.

While Hervey’s comments have sparked questions about Jennings’ work ethic, Ottawa provides a fresh start for the REDBLACKS’ newly-signed pivot, including the chance to work with one of the CFL’s top up-and-coming coordinators in Jaime Elizondo. If Jennings becomes a star again, a head to head battle with Mike Reilly in Vancouver would be must-see TV.