MONTREAL — After breaking two combine records, Carleton University defensive back Jacob Dearborn was one of five players added to the roster for the CFL National Combine presented by New Era.

Dearborn set an all-time combine record at his position on Wednesday at the Eastern Regional Combine with an 11-foot, one-inch broad jump, while his 41-inch vertical was the highest ever by a defensive back at a regional combine, setting him apart from the rest of the competition.

“I had a pretty good idea that I wanted to be around there,” Dearborn said of his impressive jumps. “I had no idea it was record-breaking, I knew those numbers were within my range so I was pushing for them. To hear that, it’s surprising, it’s exciting.”

The national showcase will take place March 22-24, as prospects look to impress the scouts before the 2019 CFL Draft on May 2. All 35 of Wednesday’s participants are draft eligible. 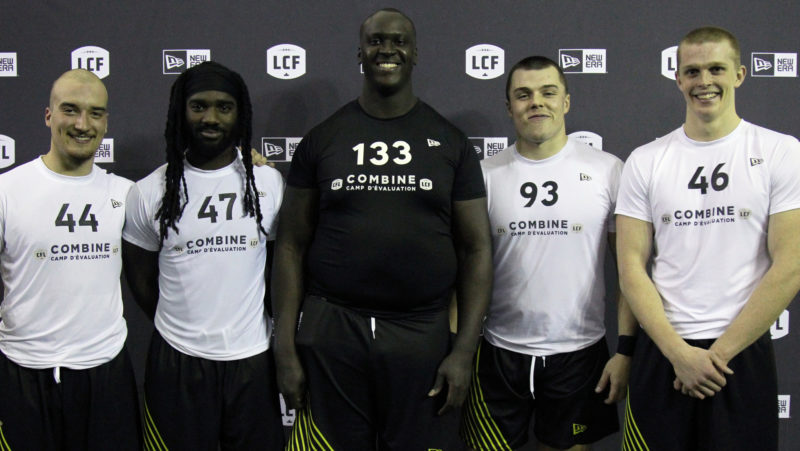 Five players were chosen to be added to the national combine roster in March (Brianna Thicke/CFL.ca)

Laval defensive lineman Clement Lebreux set the tone early in the day, setting a new benchmark for 2019 combines with 33 reps on the bench press.With only two offensive linemen testing, the defensive linemen dominated the bench, as Concordia’s Lukas Redguard (26 reps) and Sherbrooke’s Samuel Piche-Luneau (25) round out the top-three.

Of course, that was before Dearborn nearly jumped out of the gym, or, in Wednesday’s case, the bubble. The Ravens defensive back showed his explosiveness by topping both the broad and vertical jumps, while his 40 time of 4.74 was third overall and tops among DBs.

“I think overall it’s important rather than to have a standout test it’s good to have good, well-rounded numbers that are respectable,” said Dearborn. “I do feel it took a little bit of stress off when I did the vert and then the broad. I knew those were good numbers and I felt like it helped me settle into the day knowing I completed those two and I was happy with the results.”

The 6-foot-3, 201-pound defender also kept receivers at bay during the much-anticipated one-on-ones, including a couple of nice pass breakups.

“I was happy with all my reps one-on-one. I’m a pretty detail-oriented guy, so there are little things that can be fixed and should be fixed that I’m going to be working on, but overall I think I did well on the reps themselves.”

Despite not getting the invite to national, Ottawa Gee-Gees receiver Kalem Beaver stood out in the testing portion of Wednesday’s events. The 5-foot-9, 185-pound pass-catcher had the fastest 40 by nearly two tenths of a second, sprinting to a time of 4.55, and also ranked top-three in both the short shuttle (2nd, 4.28) and three-cone drill (3rd, 7.31).

One of the biggest players at Wednesday’s regional, Carleton O-lineman Omara has booked his ticket to national after a strong performance in the one-on-ones. The 6-foot-5, 324-pound blocker also had 15 reps on the bench press. 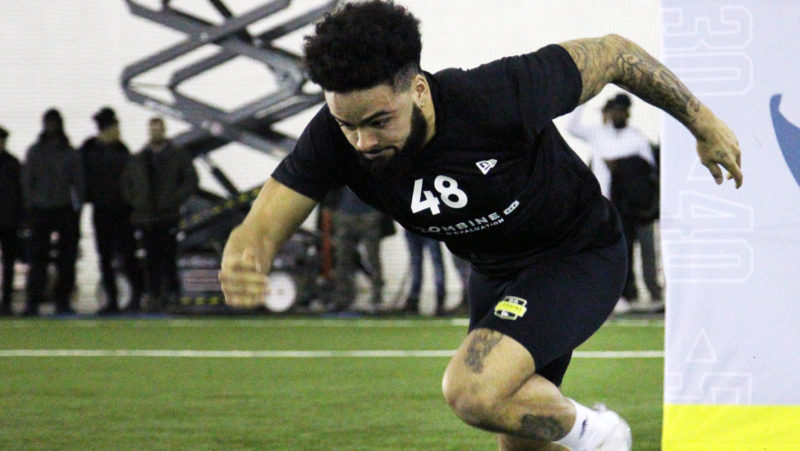 Ottawa receiver Kalem Beaver had the fastest 40 with a time of 4.55 (Brianna Thicke/CFL.ca)

Like the offensive linemen, the linebackers were also outnumbered throughout the day, but Whyte took advantage of the additional reps, impressing the scouts during individual drills. The St. Francis Xavier product had 11 reps on the bench press and led all linebackers with a 7.84 in the three-cone drill.

Kerfalla-Emmanuel showed his speed and explosiveness in the testing portion of the day, ranking top-five in both the 40-yard dash (4.78) and three-cone drill (7.34). His Montreal teammate, Belisle, will join him in Toronto after running a 4.79 in the 40.

Following showcases in Edmonton and Montreal, the regional combine circuit caps off on March 21 in Toronto, a precursor to the national event the following three days.