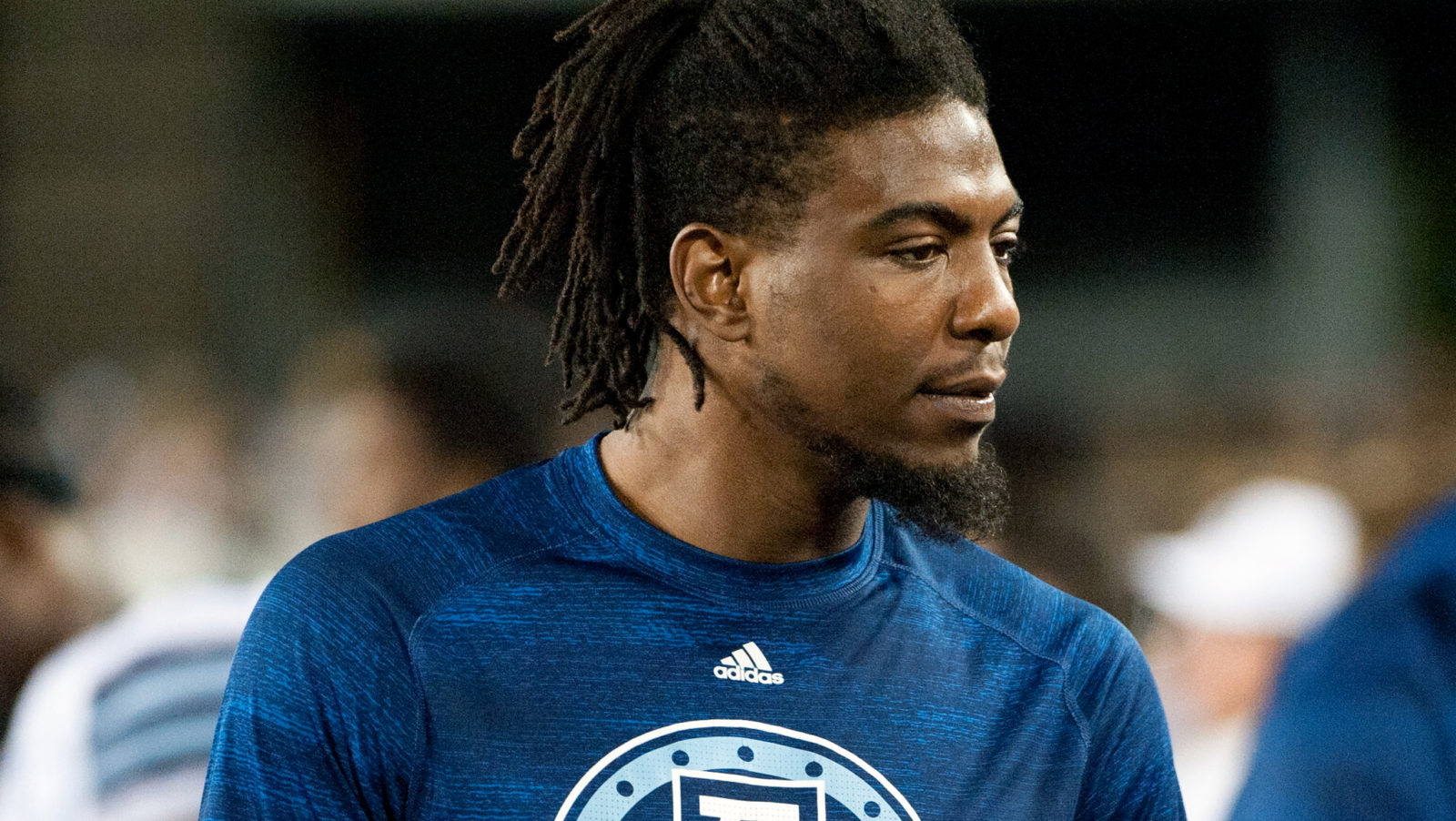 He’s thrilled a quarterback of the calibre of Mike Reilly will be throwing him passes this year. He’s pumped over the prospective of having his best season ever in the CFL. He’s anxious to prove he can take on a leadership role with the BC Lions.

And, although he might not want to admit it, Carter should be happy for another chance to prove to fans and teammates he’s the kind of player you want on your roster.

“I hope that through being a successful team in BC, all the good can show,” Carter said. “When we were successful in Saskatchewan, all of a sudden I was such a great guy and I was a team leader. Everything is going well.

“As soon as you lose, the same thing happened in Montreal, there always has to be somebody to blame. At this point in my career, I would much rather not be the guy to blame.” 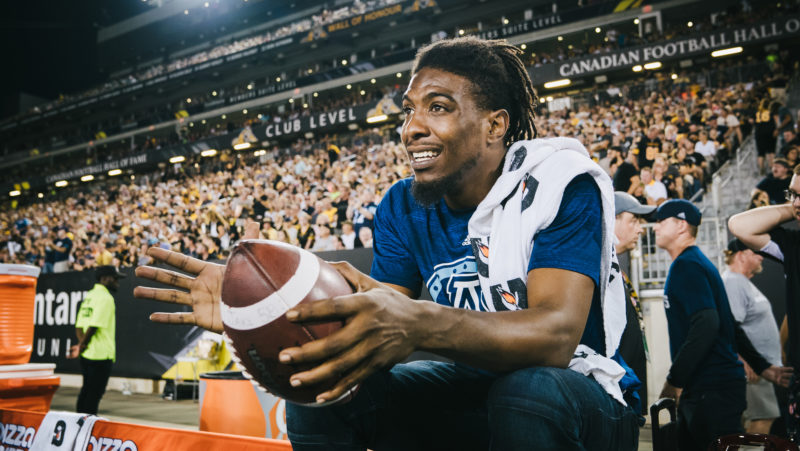 After being release by the Riders last year, Duron Carter latched on with the Argos (Johany Jutras/CFL.ca)

At six-foot-five, and 205 pounds, Carter has all the tools. It’s just sometimes he lacks the tool kit.

He checks the boxes with the size and strength to make catches in traffic and the speed to beat defenders. Lions head coach DeVone Claybrooks praises Carter’s “elite level football IQ.” Offensive coordinator Jarious Jackson loves his ability to stretch the field.

In 276 CFL games with Montreal, Saskatchewan and Toronto, Carter has 276 catches for 4,150 yards and 27 touchdowns. He’s scored a touchdown on a missed field goal turn and returned an interception while playing defensive back.

Carter can be the most exciting player on the field and the most unpredictable. With the good comes the bad.

There’s been off-field distractions, run-ins with teammates and the law. Carter is like the likeable kid you knew growing up who somehow always found himself in trouble.

The Lions know the baggage Carter brings. They also believe they can solve the riddle he presents.

“He can be misunderstood,” said Jackson, who was an assistant coach in Saskatchewan when Carter had his best season. “He’s just an outspoken person. He wears his emotions on his sleeve. You have to pat him on his back for his passion, try not to harness that and make him be somebody he’s not.

Claybrooks dismissed concerns Carter can be a dressing room cancer.

“If you ever talk to any of Duron’s teammates, no one says anything bad about him,” said Claybrooks. “Even teams he’s been on in the past, teammates don’t do that.”

Carter laughs when asked if the move to the West Coast gives him a fresh start.

If anything has rejuvenated Carter’s attitude it’s the prospective of playing with Reilly, the best quarterback he’s played with in the league.

“It literally means everything to me,” he said. “I haven’t taken my off-season this serious since I was a rookie first coming into the CFL. I just want to be ready because he’s a superstar.

“I have seen him elevate other guys’ play. I just want to be part of that. I’ve been through 15 or 18 different quarterbacks in my career. It would be nice to have an All-Star quarterback where he can put the ball up and I can go get it.”

Carter’s most successful year in the CFL was 2017 with Saskatchewan where he had 73 catches for 1,043 yards and eight TDs. It also was the only time in five seasons he played a full 18 games.

The Fort Lauderdale, Fla., native believes he can better those numbers in 2019.

“I can’t wait to be with a quarterback that is not only able to get 40 to 45 attempts in a game but complete 30 of them and deep ones too,” he said.

“I think I will be able to do some things that people have never seen before. If you look at the numbers as far as targets and everything, I’m nowhere near the top of the CFL in my career.” 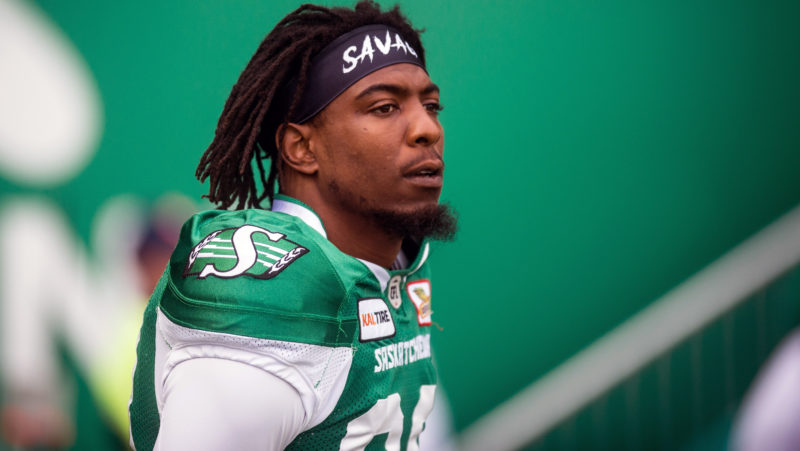 Carter’s best season in the CFL came as a member of the Roughriders (Matt Smith/CFL.ca)

With Reilly in the pocket, Carter hopes to be targeted seven to 10 times in a game instead of “scraping for three or five.”

Carter has flirted with trouble most of his career. There were off-field issues and academic ineligibility in college.

While playing in Montreal he was ejected from a game after brushing Ottawa head coach Rick Campbell and knocking him down. There also was an altercation with quarterback Rakeem Cato during a practice.

After his release from Montreal Carter joined the Riders. After his stellar 2017 season, he was released seven games into 2018 for reasons that were never defined.

The Lions were interested in signing Carter then, but he elected to join the Argos instead.

“That turned out to be a bad idea,” Carter said. “I was put in even more turmoil.”

Carter turns 28 later this month. He admits coming into the league with a chip on his shoulder but now wants to take his responsibility as a veteran seriously.

“A lot of guys look to me as a sort of a reference point for what they want to do,” he said. “They have seen what I have done in the league, what to do and also what not to do.

“I have to be more responsible for that in the upbringing for the young guys on the team. That just creates a better team and hopefully a championships team.”

Carter, the son of NFL Hall of Fame receiver Cris Carter, has been around the media all his life. Although he’s often painted with a negative brush, Carter shrugs of the press’s criticisms of him.

“I understand the job that everybody has and the things that they are doing,” he said. “I appreciate the attention.

“Sometimes I wish that it (the media) said some things different. I just wish that people, especially in the media, they go off so much speculation and they use my name in speculative comments that create thoughts in people’s heads. They don’t use actual facts about things that happen.”

For example, Carter said he never got in a fight with Cato in Montreal.

“Really, the whole thing, I was breaking up a fight,” he said. “Sometimes I just wish there was somebody on my side.”

Carter comes to the Lions with a clean slate. General Manager Ed Hervey and Coach Claybrooks are willing to give Carter some rope. It’s up to him what he does with it.

“You only get so many chances.”