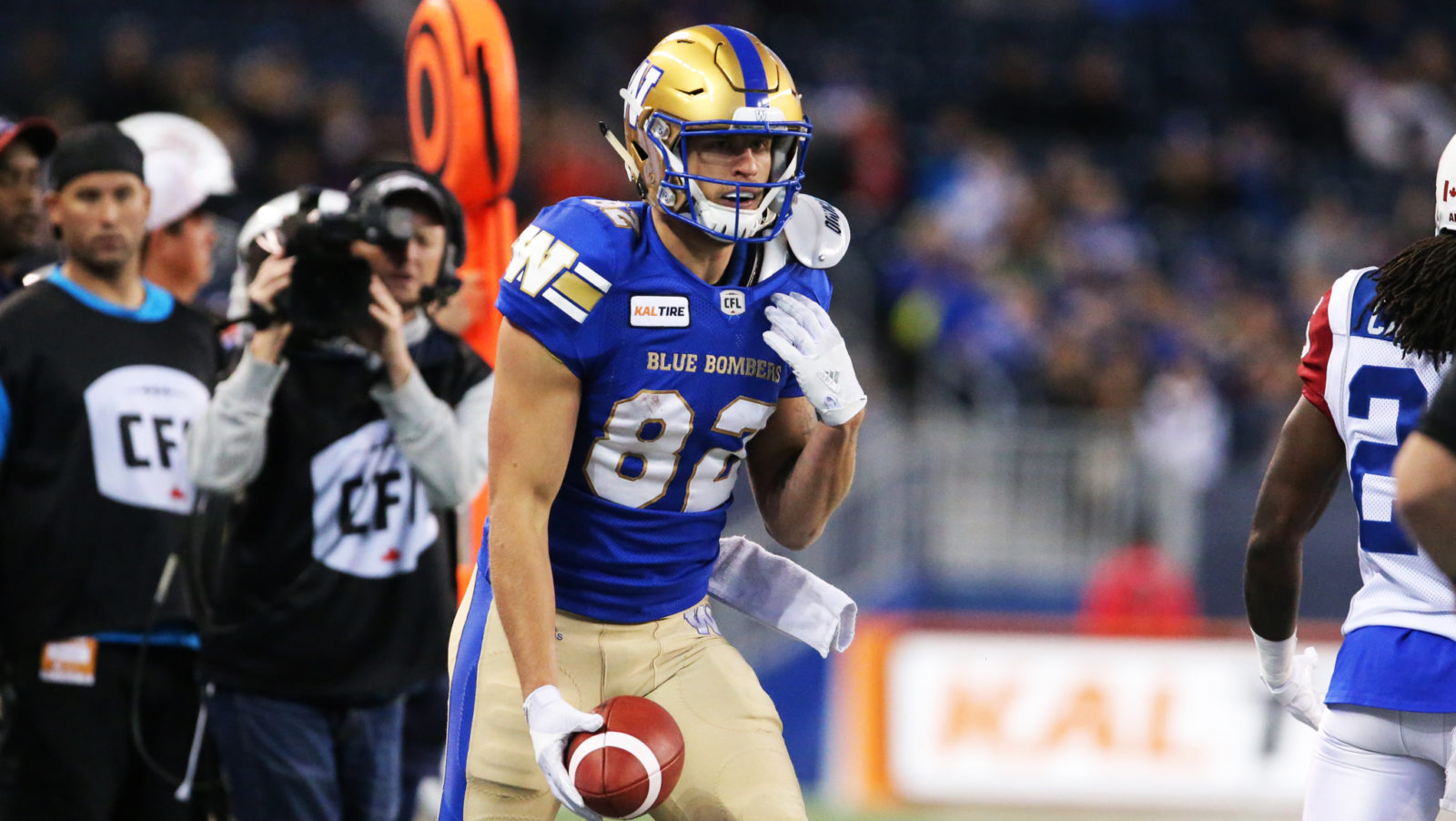 It’s like a marriage. That’s how the Winnipeg Blue Bombers’ Drew Wolitarsky describes the relationship between a quarterback and a receiver.

It also might explain Wolitarsky’s breakout CFL season in 2018.

The 24-year-old wide receiver admits at the start of last year he didn’t know quarterback Matt Nichols particularly well. That changed as the season progressed and, with time, they picked up the traits of a married couple.

“You have it in long-term relationships,” said the six-foot-two, 223-pound native of Santa Clarita, Calif. “You know things about your wife. You know what she is going to do before she does them. If you say something, you know how she is going to respond.

RELATED:
» Mock Draft 1.0: Who do the Bombers take?
» Bombers bring back Nevis for 2019
» Steinberg’s MMQB: Actions speak louder than words 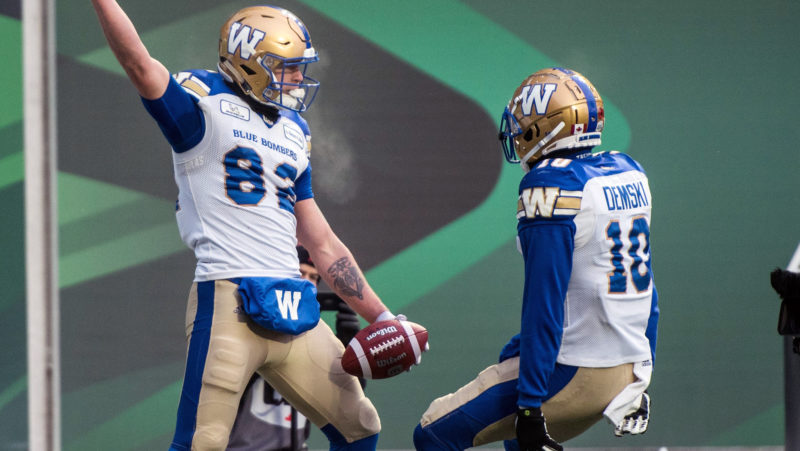 Wolitarsky celebrates a touchdown in the Western Semi-Final in 2018 (Matt Smith/CFL.ca)

Wolitarsky played five games with the Bombers in 2017, making one catch for 15 yards. In his first eight games last year he had 10 catches for 157 yards and four touchdowns.

“I started pretty slow, I expected that to happen,” he said. “I just stayed patient.”

With each game Wolitarsky become more comfortable in the offensive scheme and gained more of Nichols’ confidence. He finished the year as Winnipeg’s second-leading receiver behind Darvin Adams with 46 catches for 665 yards and five touchdowns. His best game was eight catches for 90 yards in an Aug. 25 match against Calgary.

Wolitarsky, who attended the University of Minnesota, credits Adams and Weston Dressler with spending extra time before and after practices, teaching him about the waggle, the different motions and a totally new offence.

“It’s a really cool thing to be that close with your teammates and have that relationship with those guys,” he said. “You are able to make spectacular plays that you wouldn’t have been able to before that.”

The Bombers were a bit of an anomaly last year. They finished with a 10-8 record, third best in the West, then defeated Saskatchewan in the Western Semi-Final before losing to Calgary.

Adams, who had 61 catches for 1,028 yards and 10 touchdowns, was the league’s eighth leading receiver but the only Bomber in the CFL’s top 20.

Of course, your offence gets a big boost when you have the league’s leading rusher in Andrew Harris, who had 1,390 yards on 239 carries, plus made 58 catches for 451 yards.

“You can look at percentages and placement in the West, but at the end of the day we made the (West Final). Could we have thrown for more yards? Sure, but we have a lot of plays that cause deceptions that are very tricky to stop. Our guys know what they are doing. I’m not worried about how many yards we are going to throw for this year.”

Wolitarsky followed a twisting path to Winnipeg. He had 130 catches for 1,749 yards during his career at Minnesota but was overlooked in the NFL draft.

He attended the Minnesota Vikings’ rookie camp but was released. Not long after Wolitarsky was working at a restaurant in Minneapolis and served dinner to Chad Greenway, how had just retired from the Vikings. 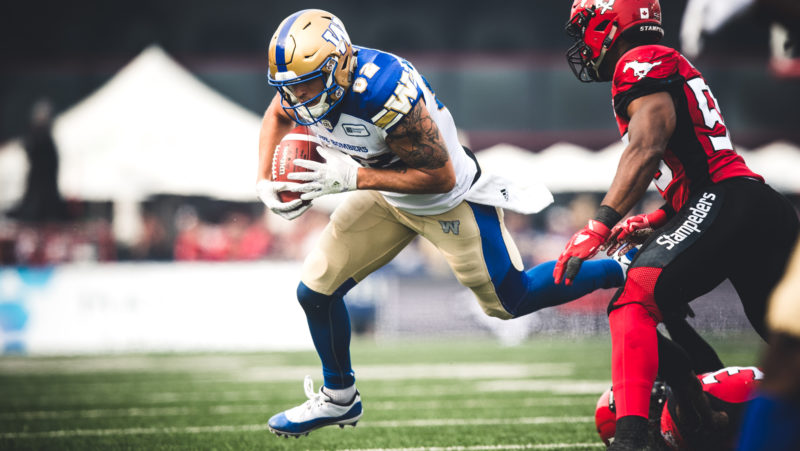 Wolitarsky remembers thinking, “this is crazy. A year ago I’m playing in front of 50,000 people. Here I am severing this legendary linebacker.

“It was a humbling experience.”

An older brother suggested Wolitarsky consider the CFL. Since his mother was born in Montreal, Wolitarsky could apply for Canadian citizenship.

Another piece of the puzzle fell into place when it turned out a friend knew former CFL coach Marc Trestman. The two spoke on the telephone and it was Trestman who convinced Wolitarsky how big an asset it would be to have a Canadian passport.

Several CFL teams showed an interest in Wolitarsky but Winnipeg wasn’t one of them. So it was a surprise when the Bombers selected him in June of 2017 in the CFL Supplemental Drafts.

Wolitarsky is happy he made the move north.

“I love being in Canada and playing up there,” he said. “It’s a great empierce. I love the cities.

“I’m in LA right now. I can tell you dude, I’m not about this life. It’s too hectic for me. I miss that Prairie life.”

Wolitarsky knows his learning curve will continue this season but he’s working from a solid foundation.

“I’m coming in with a good base,” he said. “Last year I was the newest guy on the squad, just trying to earn trust. I think I did that, and I feel like I will be more incorporated earlier on in the season.

“That will lead to more plays, more opportunities for me to make plays on the offence. I just catch what comes to me. That’s my job.”