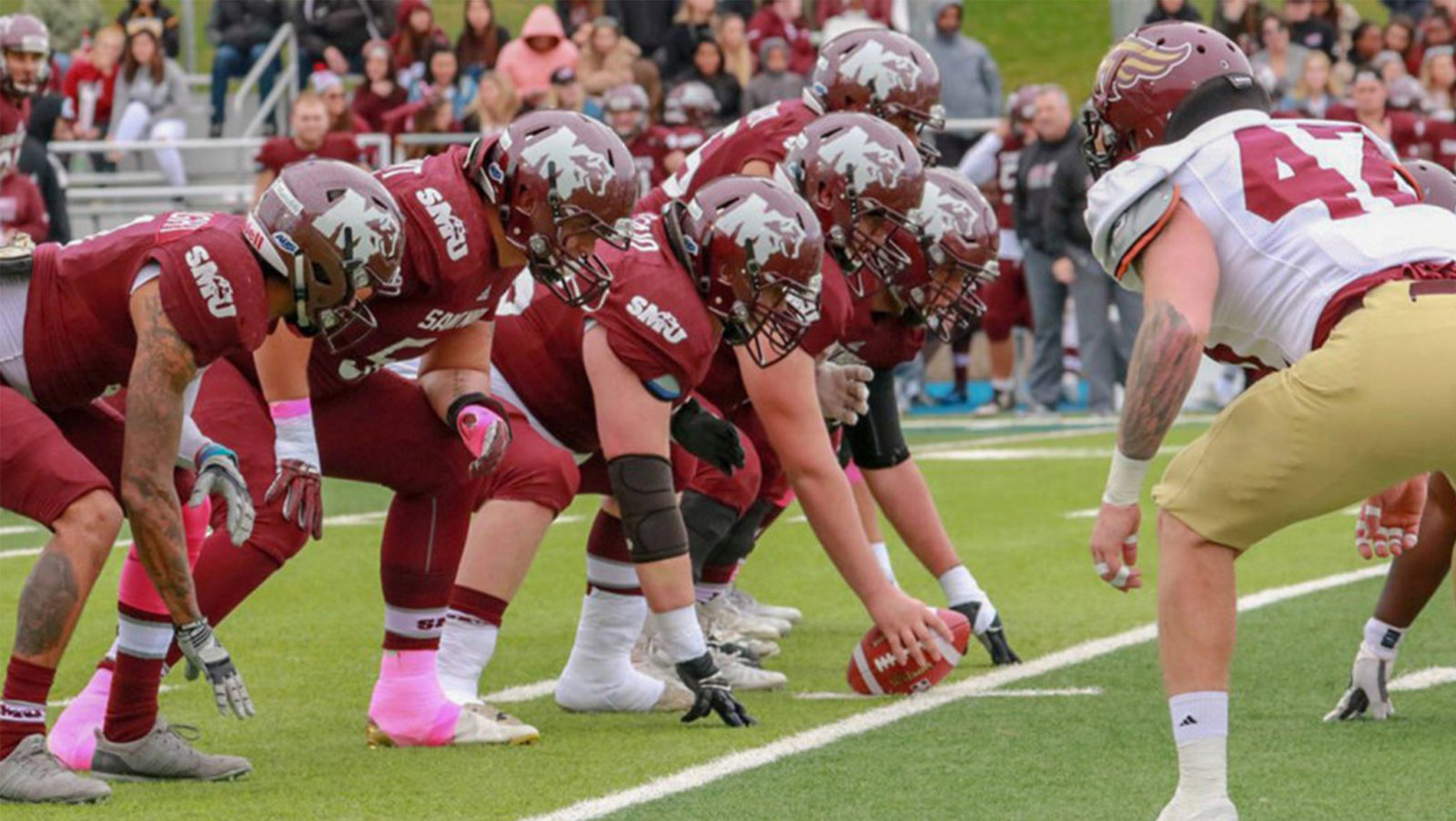 There is something about AUS football in the autumn.

Perhaps it’s the parity, with the conference’s major players routinely trading wins and losses and the conference winner never a sure thing. Maybe it’s the scenic college towns — Wolfville, Sackville and Antigonish — balanced out by the relative metropolis of Halifax.

Regardless, it’s one of the best-kept secrets in Canadian sports, and offers unique opportunities for football players and coaches.

We sat down with the four maritime-based coaches in the AUS to discover what makes football in Atlantic Canada so unique. 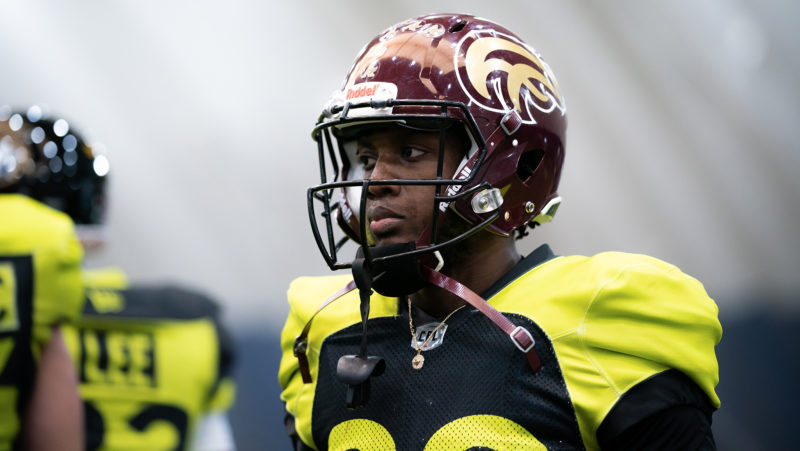 Mt. Allison receiver Malik Richards was one of a number of AUS players to feature at the CFL’s National Combine last month in Toronto. (Johany Jutras/CFL.ca Photo)

The Maritime provinces have an inherent magnetism to them.

For those from the region, like Mount Allison head coach Peter Fraser, the chance to return home is one not to be passed up.

“The thing about the East Coast is you’re the biggest show in town,” says Peter Fraser, an Oromocto, N.B. native entering his second season at the helm of the Mounties. “You’re not competing against the Argos or Ticats. In Sackville and at Mt. A., it’s a football town. We average 2,000 (fans) a game, and the town practically shuts down.”

For others from elsewhere, such as Saint Mary’s head coach James Colzie III, the call to the East Coast comes with the promise of opportunity and a chance to build a national program.

“You get a certain amount of kids from Ontario, Quebec, B.C., plus local kids here in Nova Scotia,” explains Colzie, who was once a dual-sport athlete during his time at Florida State in the 1990s. “That resembled Florida State, where Coach (Bobby) Bowden made sure we had some of the best kids from across the country.

The word of a certain Blake Nill — who Colzie worked with at UBC during its 2015 Vanier-winning season — helped sell him on making the move to Halifax.

“He’d show old games in ’01 and ’02, when SMU was winning Vaniers and playing in front of crowds of 9- or 10,000,” explains Colzie. “That was unheard of, (and) SMU was struggling before I got here. I wanted to return to that tradition of Vanier Cups.”

ST. FX breaks it down prior to a game last season. (X-Men Football Twitter)

St. FX head coach Gary Waterman will be the first to tell you that the Atlantic conference plays a unique brand of football.

“We play each team multiple times, (so) execution becomes critical,” said Waterman, who is entering his 11th season leading his alma mater. “We tend to get some weather out here — wind at times — so you have to have a sound running game.

“But, when you get favourable conditions, you also have to be able to throw the ball well.”

Away from the field, the AUS is a conference which offers a unique opportunity to student athletes.

“Being mostly smaller schools, what you have is a great sense of community,” continued Waterman. “Kids that come here form really close bonds with each other, (and) schools understand the concept of a student-athlete and engaging in a community experience.” 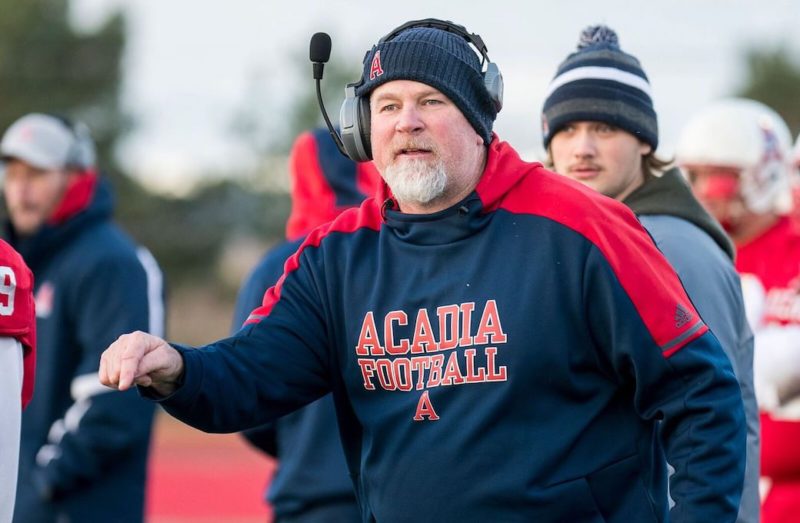 Acadia head coach Jeff Cummins is another transplant to the East Coast.

The former CFL defensive lineman has made a home in Wolfville, N.S. as the head coach of the Axemen since 2004.

“My wife is from the East Coast,” he explains. “Obviously, I like it quite a bit — I’ve been here for years, (and) enjoy the small town, the people and the relationships that have been built over time.”

The potential introduction of a 10th CFL franchise in Halifax is something the 49 year-old sees as a massive boon for Atlantic football as a whole.

“It’d be incredible, and would give all these young kids something to shoot for right in their backyard,” says Cummins. “The ability to have tangible evidence of guys that are playing right in front of you, that you see at the store — at the mall, around town — you can’t really tell the impact on the kid until far afterwards.”

A native of San Pedro, Ca., Cummins had an experience of his own that stands out in his memory.

“I remember running into (FOX Sports analyst and former NFL star) Howie Long at a movie theatre, and I was just in awe of this guy,” he laughs. “I can’t imagine having one of these fourth- or fifth-year CFL guys walk out of the theatre with his wife, and some 16-year-old kid goes ‘wow’.

“The impact is going to be huge.”