It can be tough being a hardcore CFL fan in Southern Ontario. Now, before you think this is going to be yet another piece about the struggles of CFL fans when you live in the shadow of the CN Tower, I am here to tell you this is the exact opposite. In fact, this is the tale about a small moment of triumph that may have slipped through the cracks that I want to highlight.

Like so many other industries across Canada the sports media business is going through a difficult time. With technology constantly changing how we consume sports and younger generations finding other alternatives to traditional media outlets, we have seen giant media companies like Bell and Rogers forced to make some painful cuts to adjust to these new realities. It has affected so many good and talented people in the business and has impacted a great number of loyal readers/listeners/viewers. Career stability has become so much more elusive as we all try to figure out what the new normal is.

Which brings me to the story of our very own Marshall Ferguson and his rather eventful month of March with his day job hosting the morning show (‘Marsh & Melo’) on TSN 1150 in Hamilton. What I love about their show is just how much CFL content makes their airways. Like so many CFL geeks I was riveted on the first day of Free Agency, and when they did a special show dedicated to all the player movement, I ended up catching most of it. 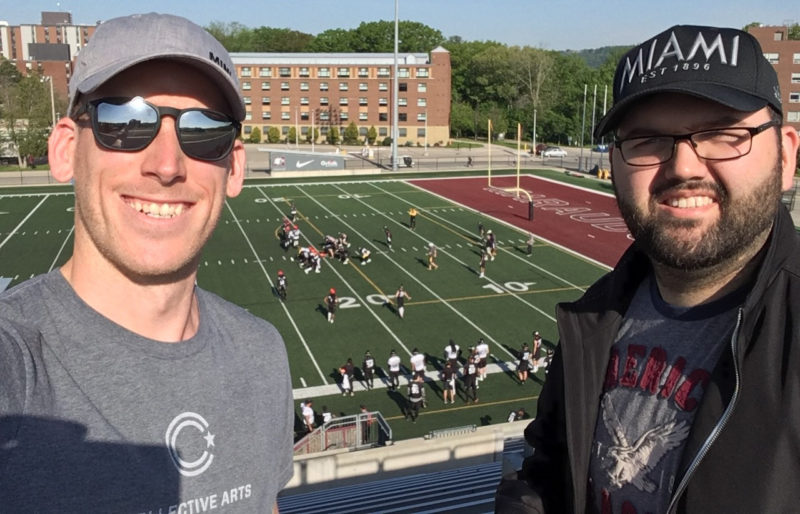 So it was especially tough in mid-March when the news came down that Marshall and the other host Kyle Melo were being split up, and that the morning show was being cancelled. This news stunk on so many levels. I consider both those guys as friends. As someone who works in radio, I always hate it whenever there are cuts no matter what the station is, and as a CFL fan this development would leave a big void to not only me but also to so many other three-down devotees.

But then, about two weeks later, it was suddenly announced that the band was getting back together again and, like that, ‘Marsh & Melo’ were back on the air and one of my favourite sources for CFL news and opinions was again humming.

So what happened? I got the feeling from Marshall that it was one of those grassroots movements that helped convince that shadowy group known as the “higher ups” to put the show back on the air.

I spoke with Marshall and the demise of their show was about the bigger picture. Isn’t it always? Whenever there are national cutbacks, disruption and job loss is inevitable. The initial solution was to split up the team with Marshall on air for the busiest hour of the morning commute, while Melo would handle the afternoon drive home. This lasted about as long as a Johnny Manziel tenure with any one team. The problem was, despite coming from such different backgrounds, these guys just clicked working together. They were fine on their own doing one-hour shows in an attempt to give Hamilton and the surrounding area a voice for local sports, but the chemistry that had been built was gone. Thankfully just as swiftly as their show was taken off the air, a new plan emerged that saw the two back together again in the mornings in their original time slot of 6-9 a.m.

What I appreciate about their show is it’s an alternative from the mainstream. Now full disclosure, I am part of the “mainstream” at TSN 1050 in Toronto doing a job I wildly love, but life is all about choice and when I need a break from William Nylander conversations and I want to hear a debate about where Jeremiah Masoli ranks, I tune into TSN 1150. The guys have a vision of their show as being a destination for a different take on the traditional sports talks with a heavy heaping of CFL.

The Waggle, Ep. 152: Life after Elizondo

With the news that former offensive coordinator Jaime Elizondo suddenly left the REDBLACKS for a role south of the border, Donnovan and Davis debate the timing and etiquette of the move, as well as where Ottawa goes from here.

Shows like this are important because when the Tiger-Cats are doing well, the entire city of Hamilton has a different vibe and you need programming that can reflect that. I appreciate that Marshall doesn’t hide from his strengths. The sports media industry is littered with people who fake their knowledge level about specific sports but Marshall is up front and honest that he can’t go as in-depth with the Jays or the Leafs as he can with football. Kyle Melo can do more of the heavy lifting on those fronts as Marsh goes full geek on which quarterback relies too much on the screen game.

On a bigger level, even if you’re living outside of Ontario their show still matters as they release every hour of the show in podcast form as quickly as possible. So yes, while the show will focus on the Ticats and Argonauts first, there will be plenty of yammering about what the retirement of Jovan Olafioye will mean for Mike Reilly that you can easily access for your morning commute in Vancouver. As a content junkie all of this is important to me.

Now let me apologize to the rest of Canada for this hyper local piece. I understand how this story may not directly impact you, but I think it is an important one. This story is not an infomercial for 1150’s morning show but rather a small little celebration for the return of something that is needed in Hamilton and the entire Golden Horseshoe area, and that’s giving a voice to the local perspective. Local coverage in all its forms from news (the most important obviously!!) to the arts to sports is so important to all communities no matter what the area code is.

I’m just happy to have this little slice of CFL coverage back in my life.