For Comparison’s Sake: Stacking up the draft’s top prospects 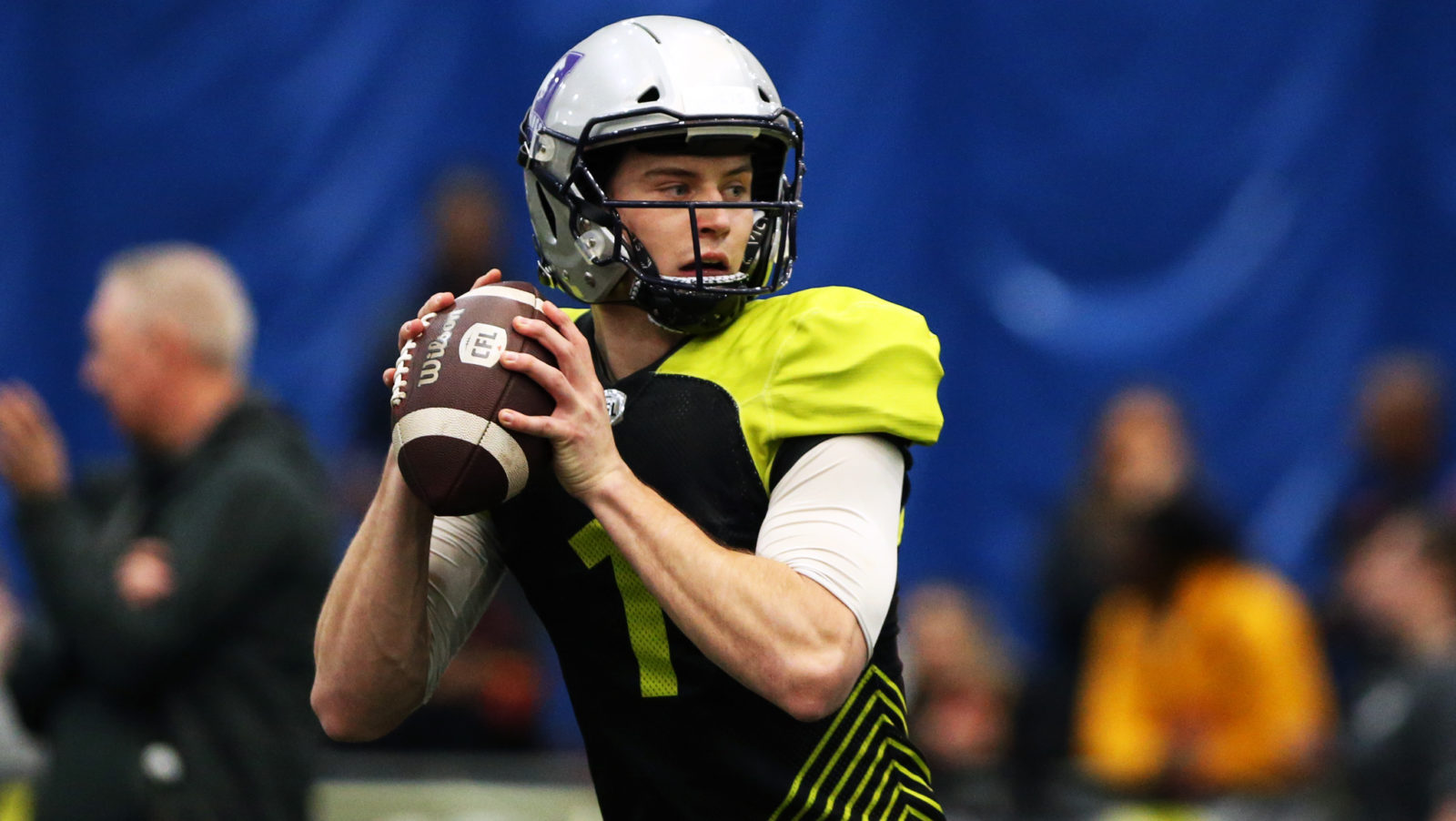 For Comparison’s Sake: Stacking up the draft’s top prospects

One of my favourite – and most challenging – exercises every year while covering the CFL Draft is to make this year’s crop of CFL Draft talent relatable for both you and I to better understand what CFL teams could be getting if they take the names we talk about so much throughout the spring leading into the draft on May 2.

Some of the below comparisons are based on combine testing, others on style of play and the eye test of watching their game. Others are a combination of the two or just a feeling about who a player could evolve into down the road. There is no science to it, but it is a worthwhile puzzle to evaluate who the next Canadian stars of the CFL might be. 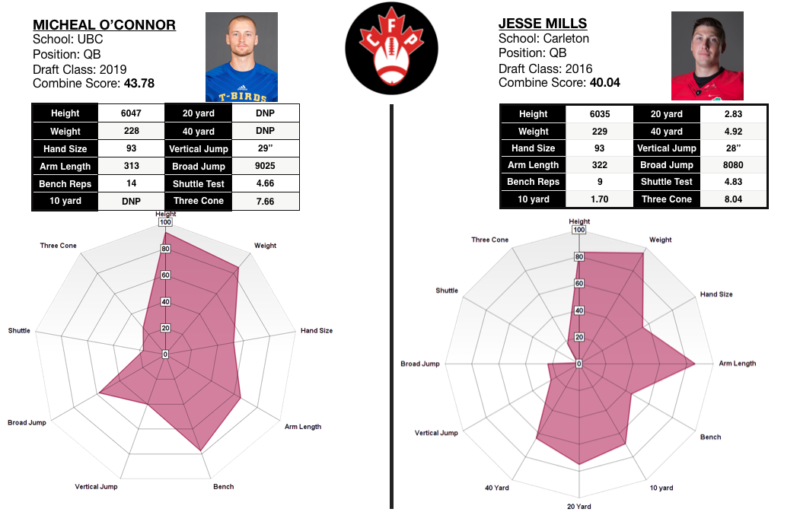 Micheal O’Connor is a unique prospect in the sense that he comes from a professional and polished development background and possesses that always sought after QB frame. That in combination with his superior ability to many before him and the way the ball comes out of his hand with the eye test makes finding a comparable difficult.

You can quickly see why finding someone who relates to his combination of attributes is difficult. For me he’s a more refined Erik Glavic but his frame and combine performance lean more the way of Carelton’s Jesse Mills. 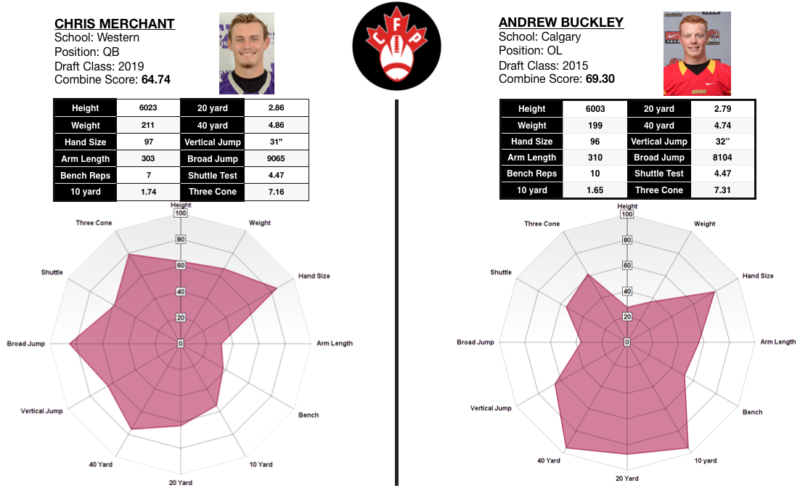 All-around well-balanced quarterbacks with a great mental approach to the game. Merchant is originally from Calgary and has every bit the ability that Buckley did before retiring last year from the hometown Stampeders. I talked to a U SPORTS scout who said he actually believed Merchant has a better chance to be in the CFL long term than fellow 2019 draft class QB Micheal O’Connor. Why?

“If O’Connor is everything people believe him to be, why didn’t UBC get more out of him? Merchant did everything asked of him in pressure passing situations and should develop nicely once in a camp with a team who gives him more than five minutes to find his feet.” 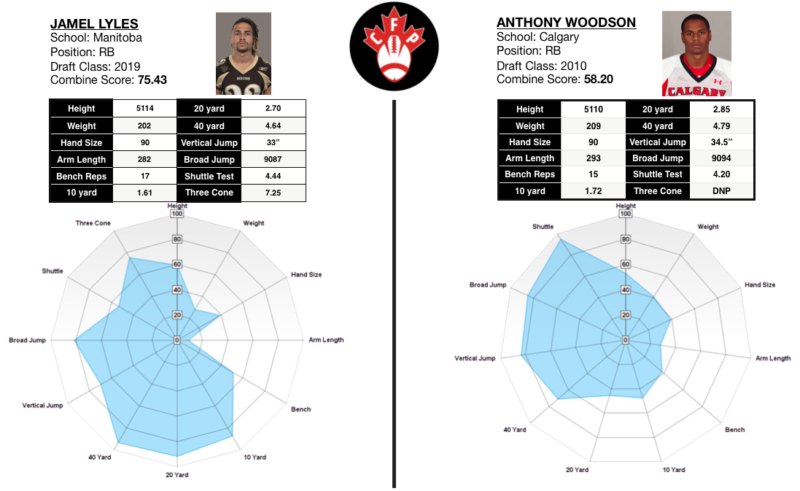 Jamel Lyles carries himself as a man ready to become a pro. So did Anthony Woodson and it led to a successful career featuring stops in Calgary, Hamilton and Toronto after being drafted 29th overall by Winnipeg back in 2010.

Lyles is a downhill slashing back with hands who will likely have to earn respect on special teams early on but, given his likeness to Woodson and physical preparedness, it’s hard to imagine he won’t be around for a while contributing like his fellow CanWest counterpart. 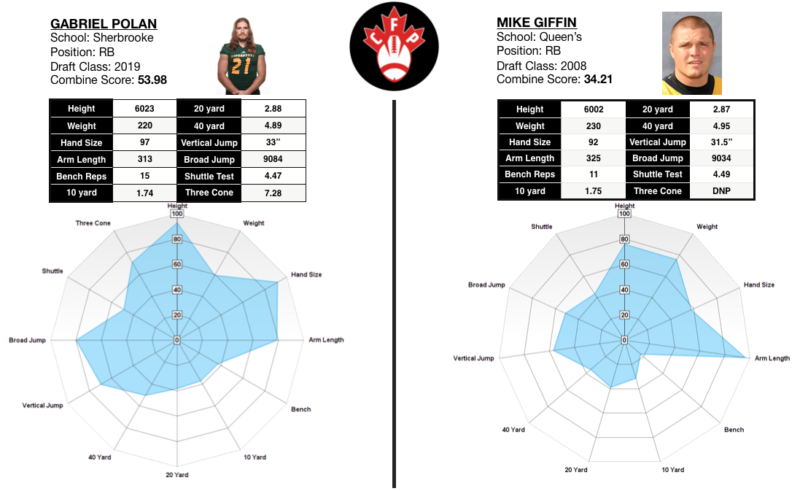 Tall, physical runners with one goal: Get yards now.

This one might twist some eyebrows in Kingston due to the Gaels fanbase’s never-ending affinity for all things Giffin memories, but Polan is a similar style player who tested out remarkably close to how Giffin did all the way back in 2008 before being drafted 17th overall by Hamilton.

Don’t expect Polan to get taken that quickly but DO expect him to earn an award Giffin took home in 2010 with the Alouettes after being signed as a free agent: Team special teams MVP. 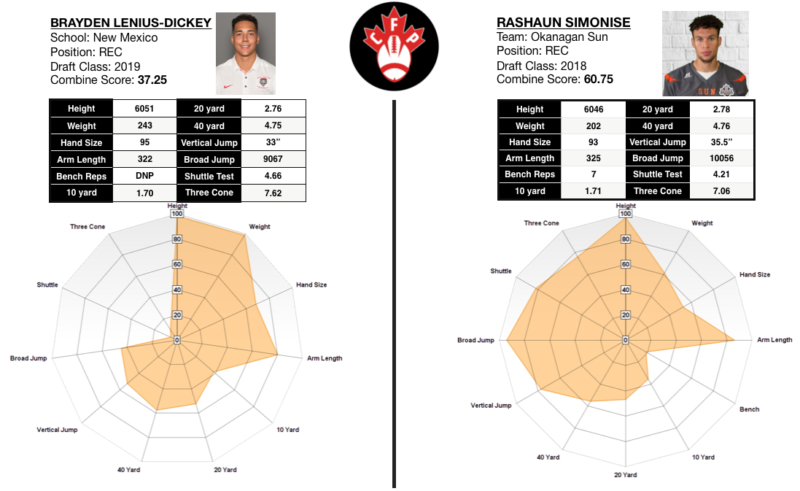 Both players bounced around for their final few years prior to the draft and both have a long frame with a massive wingspan. Simonise has more pure speed out of the blocks but Lenius’ game speed from Washington – before moving to New Mexico – looks to be more than suitable to the CFL game.

Simonise landed in Winnipeg and contributed in year one. It would be hard to imagine Lenius won’t find a similar fate in 2019 if he applies himself and a team gets the most out of all that raw ability. 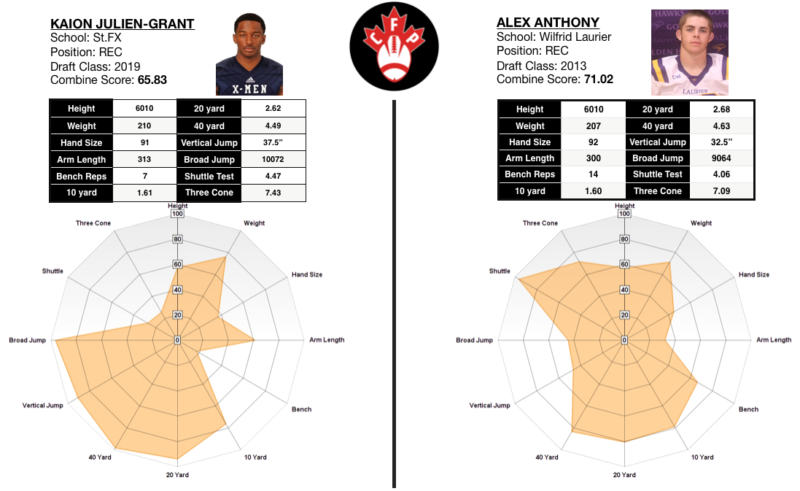 My primary goal in finding a comparable for Kaion Julien-Grant was to find a receiver of the past with similar size who showed great acceleration in the 10/20/40 splits and is understood to be a smooth route runner.

It was damn near impossible. Not many receivers have that combination of attributes – especially in recent years – making Alex Anthony formerly of the Wilfrid Laurier Golden Hawks the best available comparable. Anthony was a quick route runner in his time playing university with great ball skills and the ability to out-run angles on crossing routes. Sounds a lot like St.FX’s next great player hopeful. 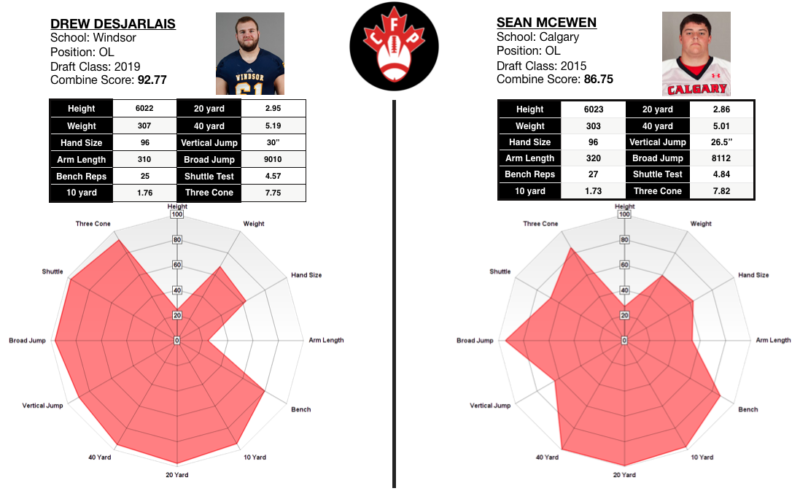 Both athletic freaks slightly undersized by traditional standards who have an innate ability to understand protections and win 1-on-1 battles. I see Desjarlais as a guard, not a centre as McEwen has anchored the Argonauts the last few seasons admirably and expect Desjarlais to be a starter by Week 2 or 3, similar to Calgary’s Darius Ciraco in Hamilton last June.

Both McEwen and Desjarlais have the old drawback of shorter arms but it’s about hand placement and having the ability to anchor the lower body, creating movement which allows both to overcome natural ‘disadvantages’. 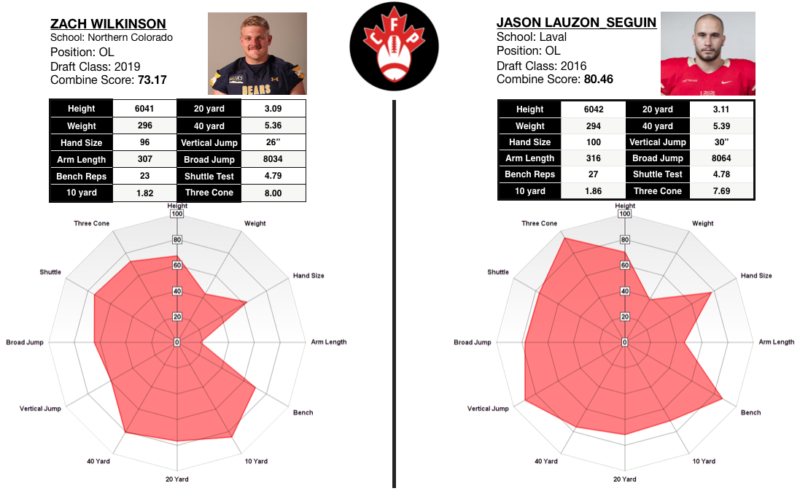 I had to try finding a comparable for Wilkinson after the CFL Scouting Bureau decided to shoot him flying up the final pre-draft rankings. The best I could do was Jason Lauzon-Seguin. Both men possess average height while being a little light in the backside at testing time but carry good healthy maneuverable weight with their frames.

Lauzon-Seguin was taken seventh overall by the REDBLACKS in 2016 and Wilkinson appears headed to challenge that height in the draft with his forward momentum. 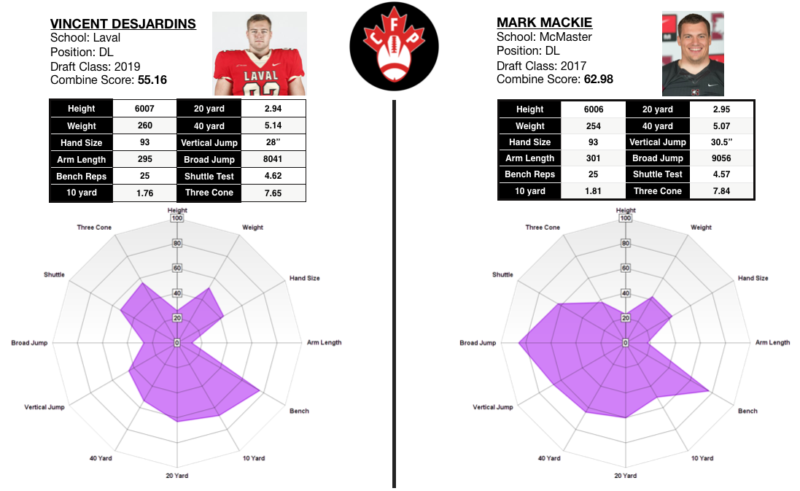 Low and powerful with the ability to push the pocket right back into passer’s laps, this one was easy. Both Desjardins and Mackie were best appreciated in their respective drafts when watching the little ways they influenced blockers and ball carrier while adding solid production. 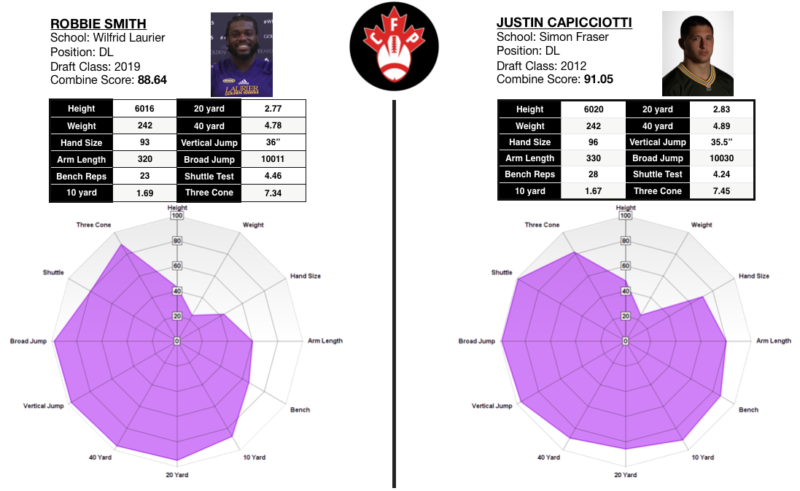 DON’T fall into the trap of having to compare Robbie Smith to another in a long line of Laurier Golden Hawks defensive lineman. The profile I was looking for here is that of a slightly undersized defensive end with exceptional and well-rounded testing numbers capable of getting to the quarterback in a variety of ways.

Enter current Ticats defensive end Justin Capicciotti, drafted 14th overall by Edmonton in 2014. Smith shouldn’t have trouble besting that number on May 2 in my evaluation but I also had Kwaku Boateng going much earlier than he ended but being drafted in 2017 (41st overall). 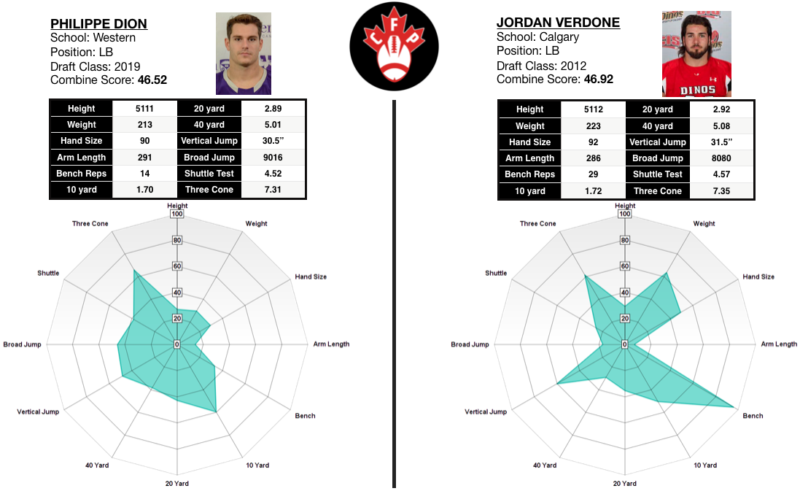 While everyone was watching Fraser Sopik fly around and make plays for Western over the last three seasons, perhaps the more pro ready linebacker was playing alongside him in London. Philippe Dion is obviously undersized for a backup WILL linebacker but with some work I could absolutely see him becoming the staple of a CFL team’s special teams units. 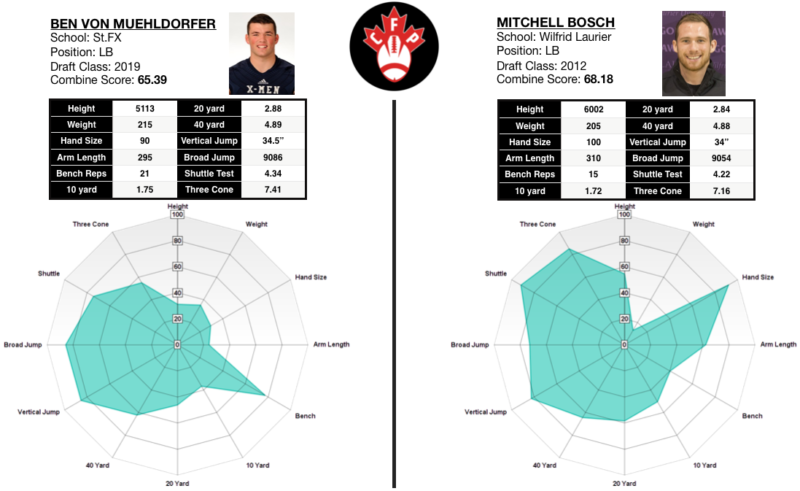 Von Muehldorfer is under the radar as an Eastern Regional Combine invitee but he jumped out to me with his above average testing numbers and production as a tackling machine with the X-men. A very similar profile to Wilfrid Laurier’s Mitchell Bosch in 2012. 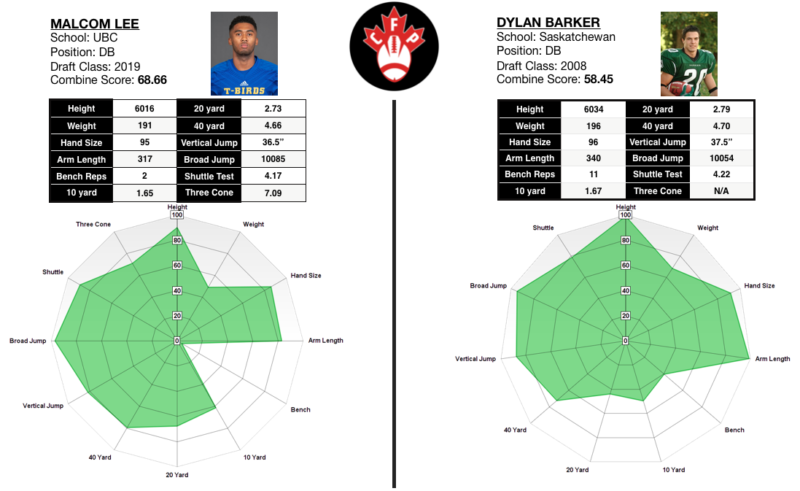 Let me start off by saying Malcom Lee is NOT going 1st overall like Barker did. Glad that’s out of the way.

Length, length, and more length. Sprinkle in some speed and ball skills and you realize where I was going with this one. Queen’s Andrew Lue is a more similar style player but has a significant size advantage on Lee which allowed Lue to dabble into the realm of weak side linebacker work.

With a similar frame and size, Lee will have to evolve into a more natural free safety in the CFL and whichever team wants him will have to hope for a smoother ending than Barker’s, which was unjustly halted due to a degenerative disk disease in his lower back after only a couple years active in the CFL. 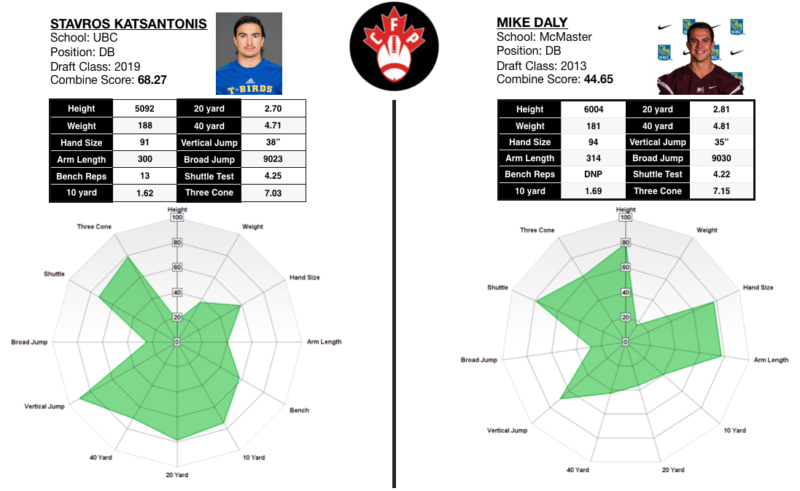 I had a U SPORTS coach at the national scouting combine point at Katsantonis unprompted and say, “tell me that guy isn’t Mike Daly.”

It’s hard to disagree after watching Stavros play. He drives on the ball like Daly did at McMaster making an interception in the 2011 Vanier Cup. He attacks the football to cause fumbles like Daly did for so many years at McMaster, and both entered their respective draft year as truly experienced players at the position they would be asked to play in the CFL – free safety.

Both are leaders of the back end capable of making big plays in the ground game who bring Vanier Cup-winning leadership to special teams in Week 1 of their rookie year.