TORONTO — One of Canada’s most cherished treasures, the Grey Cup trophy, is now sitting atop a new throne.

For the third time in its 110-year history, the chalice that is emblematic of Canadian football supremacy has a shiny new base.

The change was prompted by a simple reality: the base that has supported the original Cup since 1987 has run out of room for the plaques that list the names of Grey Cup champions.

“This is our holy grail, a symbol of Canadian spirit and unity, as well as the trophy every Canadian Football League player wants to claim in victory,” said Randy Ambrosie, Commissioner of the CFL.

“We wanted any change to its appearance to be absolutely minimal as well as tasteful. We’re thrilled with the final product.”

The Grey Cup trophy with its new base will be front and centre on Monday when Commissioner Ambrosie tours media sites in Calgary, which will host the 107th Grey Cup presented by Shaw game and festival this November.

It will be the star attraction again on Tuesday at the 2019 Grey Cup Kickoff Breakfast at Olympic Plaza in downtown Calgary, an event that marks the start of the public sale of tickets for this year’s Grey Cup.

“The shape is the same and the cosmetic changes are very minor,” he said.

On the new base, the panels bearing the names of Grey Cup champions are still mounted in vertical columns, but those are now made up of individual plaques. The champions’ names on those plaques are darkened so they are easier to see.

Starting next year, a plaque from the past will be removed each year to make room for a new one honouring the newest champion.  A plaque listing the names of the 2020 Grey Cup champions, for example, will replace the 1909 plaque.

“The Cup has such a long history, it just isn’t feasible going forward to display on its base the names of every team and every champion, not without making the trophy too large and cumbersome for it to be shared with Canadians at countless events across the country,” DeNobile said.

“And sharing it is really important: Canadians who see it often refer to it as ‘our cup’ or ‘the people’s cup’. We have been using the lower rim of the old base to hold champions’ plates since 2008 even though it was never designed for that purpose. The time for change has finally come.” 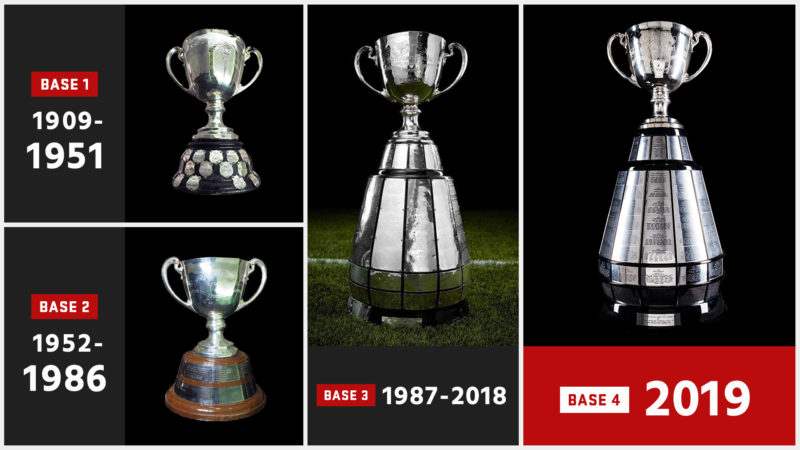 The Grey Cup trophy was donated as an award for the amateur rugby football championship of Canada in 1909 by His Excellency Earl Grey, the Governor General of Canada.

The sterling silver Cup originally sat on a wooden base. Its total cost is said to have been $48. In 1952, the wooden base was replaced a by broader, black one that featured champions’ plaques around its circumference. In 1987, it was replaced by the much larger barrel-shaped base that is now familiar to fans.

Over its lifetime, the Cup has been hosted by Prime Ministers and Governor Generals, hoisted by the game’s greatest players and heisted by mysterious villains. It has survived a terrible fire and terrific victory parties and has often needed timely repairs.

It has been stolen, held for ransom and stashed in a railway station locker, where it was retrieved by relieved officials. Most of all, it has brought Canadians together, in fandom and friendship, year after year. Like the country that loves it, it has stood the test of time, defying doubters and making its supporters proud.

“The base that holds the Cup has evolved over our history,” Ambrosie said. “But the Cup itself has proven to be beautifully timeless, even as our game has evolved and our country has grown.”