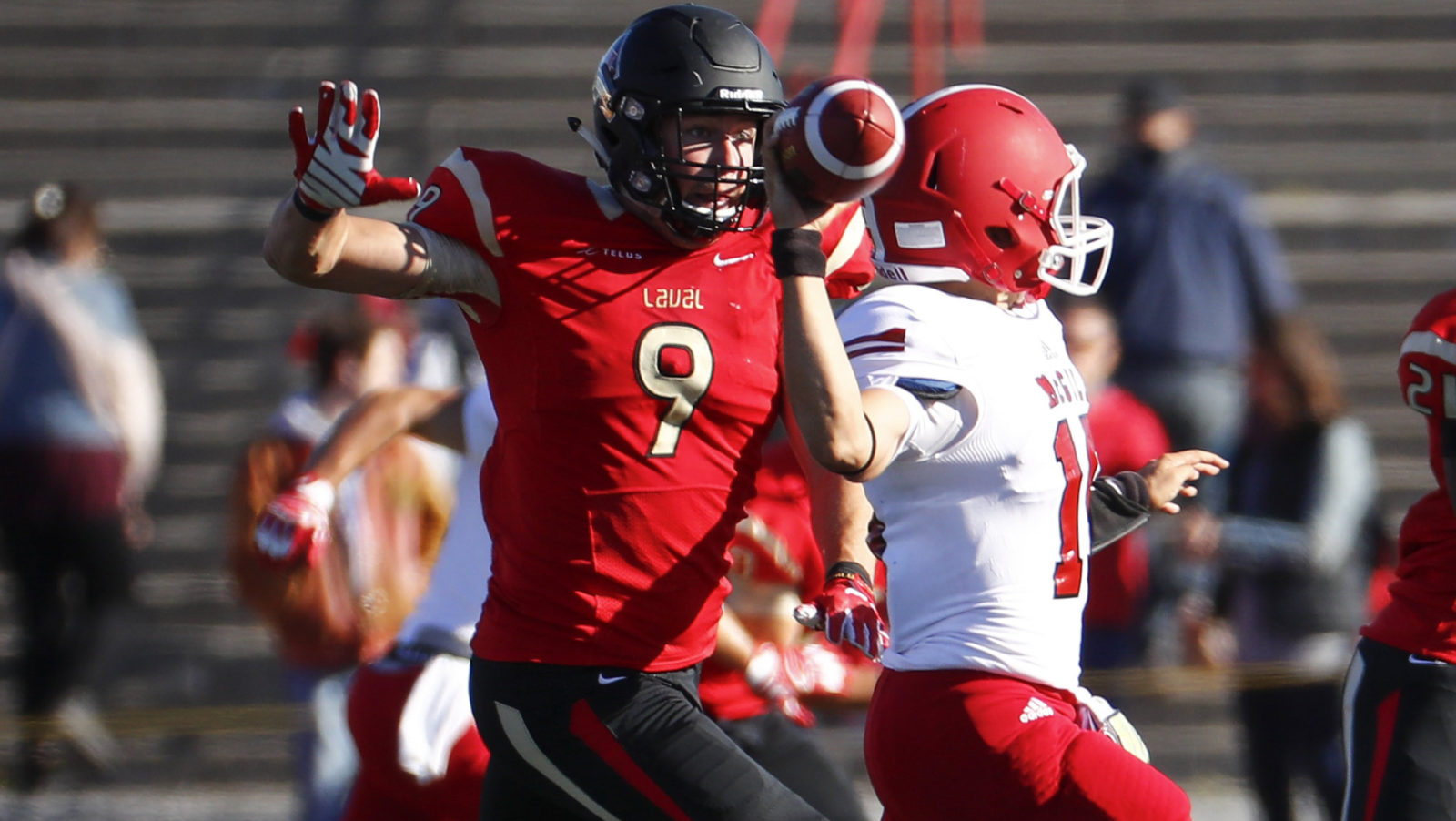 “We understand there’s a little bit of risk.”

Those were the words of Edmonton Eskimos general manager Brock Sunderland Thursday night after selecting Mathieu Betts number three overall at the 2019 CFL Draft. Sunderland isn’t wrong; there is risk associated with taking the Laval defensive lineman as high as Edmonton did. But the Eskimos are thinking big picture here, and the reward could end up being huge.

As we talked about last week, Betts signed as a free agent with the Chicago Bears, which puts his status for the 2019 CFL season somewhat in doubt. However, Edmonton didn’t make a decision like this with eyes solely on the coming season, which is why some of CFL.ca’s brightest minds like Marshall Ferguson (nailed it in Mock 3.0) and Jeff Krever were confident Betts would remain a high first round pick.

“I think when an NFL team invests a draft pick in a player it’s a little different to signing as a priority free agent, which is what Betts did in the NFL,” Krever said with me on Calgary radio last week.

“I think that Betts, like a lot of these undrafted signings, is going to have a really good chance to become available in a year or two. For that reason, I don’t think teams are going to be scared to take a player as talented as Betts. The reward probably far outweighs the risk in the first round.”

RECAPPING THE 2019 CFL DRAFT
» View full results from the CFL Draft
» Team by Team: Who landed where?
» Eskimos see transcendence in Betts

For many, Betts was viewed as the most talented player in the 2019 draft class. The CFL Scouting Bureau would be included in the group; he was named top prospect in both their mid-term and final rankings. He’ll get a shot with the Bears, but in the end, playing in Canada could very well be the best fit for Betts.

“He’s a really good fit for the CFL as far as his skill set. He’ll defend well against the run, he’ll beat a guy one-on-one to get to the quarterback,” Krever said. “We’ve seen a lot of teams go with those, sort of, futures picks.

“The guy that’s going to go to the NFL, he’s going to develop his skills further along south of the border, learning some new techniques, getting a chance to work with some really talented people, coaches and players. Then, a year or two later, you’re going to get him as a developed player who’s ready to come in and play.”

If that’s the case, the Eskimos could be in line to land a true impact maker down the road. Sunderland called Betts “a Canadian version of John Chick,” which is praise that isn’t going to be thrown around without good reason.

This isn’t new territory for Edmonton, either, as they went down this road two separate times at the 2016 draft. The first payoff came in the form of Arjen Colquhoun, whom the Esks took at 16th overall. The Michigan State defensive back was ranked fourth by the Bureau but saw his stock fall after signing with the Dallas Cowboys prior to the 2016 draft.

Well, it was just over a year later we saw Colquhoun join Edmonton and he’s trending in a very promising direction. After an encouraging rookie campaign in 2017, Colquhuon battled injuries last season, which limited him to just five games. That said, the form he showed in the backfield late in the season was promising and Colquhoun has a great chance of being a ratio busting corner in 2019.

More recently, the Eskimos have added 2016 first round pick Tevaun Smith to their list of options for this season. Much like Colquhoun, Smith saw his CFL draft stock fall after signing with the Indianapolis Colts in the days leading up. Ranked number two by Central Scouting, Edmonton nabbed the Iowa receiver at the end of the first round. 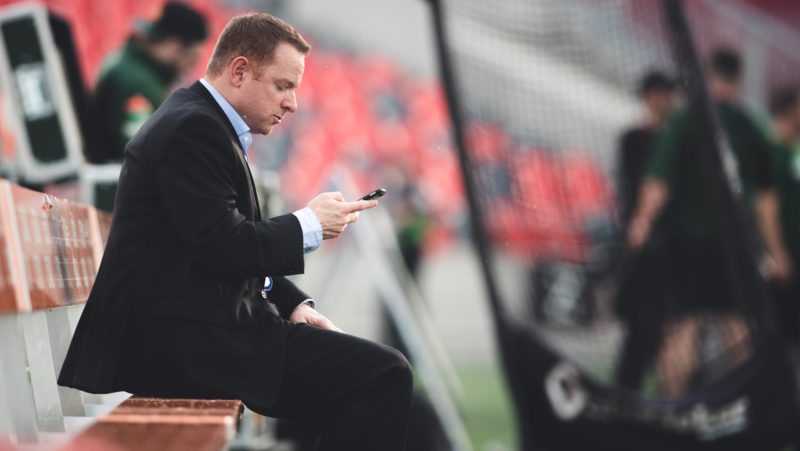 Brock Sunderland is hopes the Mathieu Betts pick will pay off down the road (Johany Jutras/CFL.ca)

The Eskimos had limited options at Canadian receivers in 2018, which makes the addition of Smith extremely intriguing. The opportunity to have impact national players in traditional American slots like corner and receiver presents all kinds of options for Edmonton.

If Betts does the same thing at defensive end in a year or two, I think most fans of the Esks will have forgotten all about the risk involved with taking him number three overall.

We saw all kinds of potential star players fly off the board in the first couple rounds of Thursday’s draft. Oklahoma State offensive lineman Shane Richards went number one to Toronto and could bolster their starting five for years to come.

Richards fills a huge area of positional hole for the Argos, which was the theme of the 2019 draft, at least for me. So many of the picks not only saw teams add outstanding Canadian talent, it also saw them strike in an area of need. Here are four more examples of just that.

Remember when the Riders boasted the league’s deepest group of Canadian receivers thanks to the likes of Andy Fantuz, Rob Bagg, and Chris Getzlaf? Things have changed in recent years, but Saskatchewan’s pick of Arkansas State product McInnis is a huge step in revamping the team’s national talent base at receiver.

The Riders took McInnis sixth overall and he has the chance to step in and make an impact right away. With 23 receptions and 194 yards, 31-year-old Patrick Lavoie was Sask’s leading Canadian receiver in 2018, so it’s an area the team needed to address. With McInnis’s size (6-foot-6) and talent, there’s a good chance we see him getting reps at receiver slots usually reserved for Americans in short order.

Ottawa’s eye for O-linemen in the first round has proven to be pretty strong over the last half decade. With Alex Mateas (1st overall 2015), Nolan MacMillan (9th overall 2013), Jason Lauzon-Seguin (7th overall 2016), and Evan Johnson (9th overall 2017) already mainstays, Kansas’s Fontana is in good company.

The best news for Ottawa here is they don’t need to rush Fontana along thanks to the Canadian depth they’ve already built up on their line. The REDBLACKS have a serious hole to fill with the departure of SirVincent Rogers, which will be difficult. The good news is they boast the league’s deepest group of national talent on the line to play around with.

The Stampeders certainly had a need at receiver, regardless of passport, which is why seeing them target the position at number eight made nothing but sense. The Stamps have said goodbye to international receivers Marken Michel, DaVaris Daniels, and Chris Matthews this winter, while Kamar Jorden is unlikely to be in starting form to start the season.

Further complicating matters was the departure of Grey Cup Most Outstanding Canadian Lemar Durant, who signed with his hometown BC Lions in February. In Mayala, the Stamps are getting a potential impact receiver in the slot, and not necessarily the position typically occupied by a Canadian. The UConn product has the chance to be a great CFL possession receiver, which makes this a really good potential match for Calgary.

The Bombers seemed like an obvious choice for North Dakota’s Oliveira to land, and not just because he’s a Winnipeg Oak Park grad. The Blue Bombers were earmarked to take one of the talented running backs in this year’s class in an attempt to keep their ratio advantage for years to come.

Andrew Harris, also an Oak Park grad, will be 32 this season, which means a contingency plan for a few years down the road makes sense. Oliveira torched NCAA 1A defences this season, running for 940 yards and eight touchdowns. A few years behind Harris in this Winnipeg offence could do wonders for Oliveira when it’s time to pass the torch.