Early Returns: 10 rookies that could start in 2019 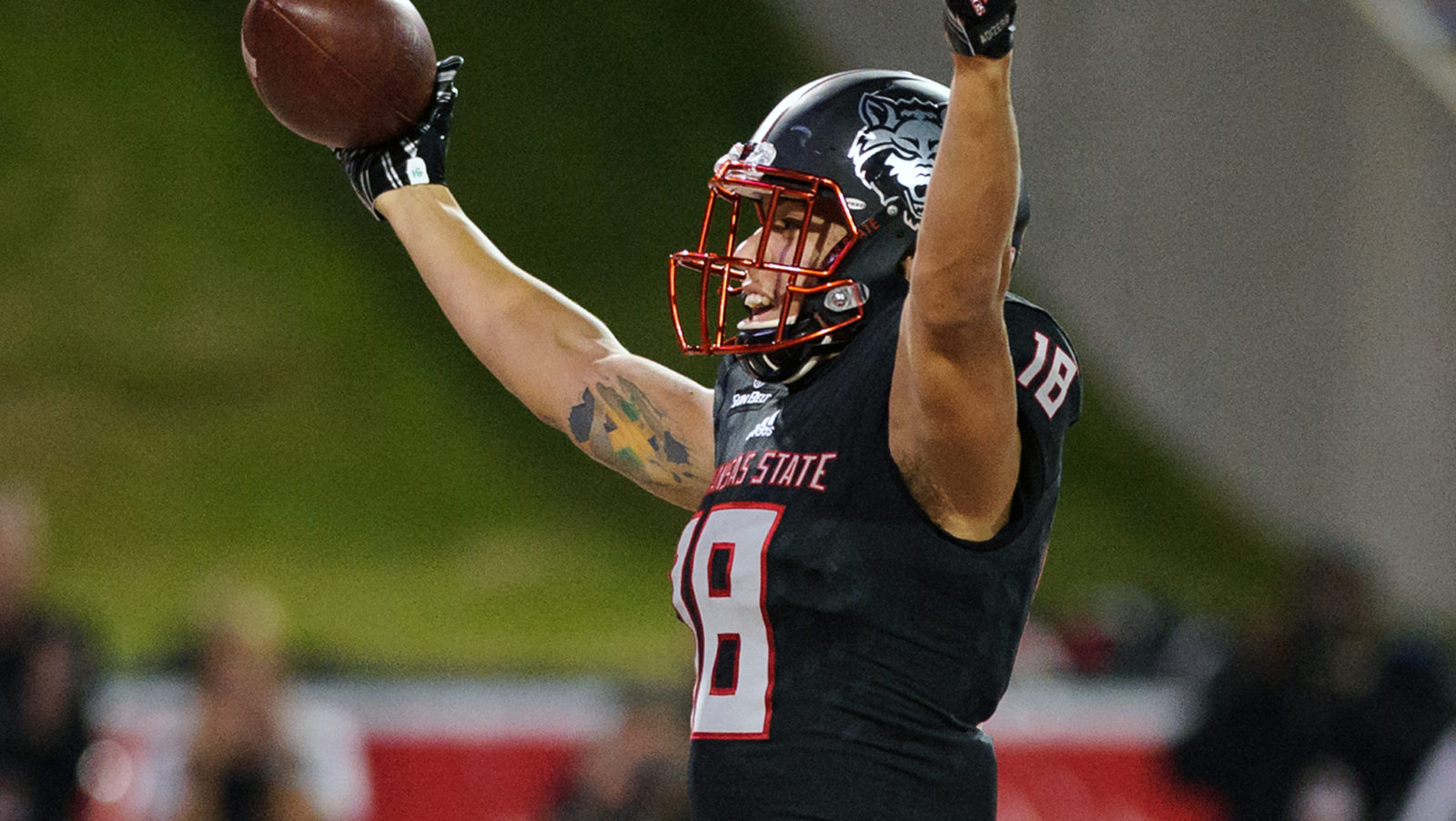 Early Returns: 10 rookies that could start in 2019

TORONTO — The training wheels could come off early for some of the 2019 CFL Draft picks.

While the draft is viewed as a long game in the eyes of front offices across the league, every year there are at least a few prospects that make the early leap to become regular starters.

Sometimes a player proves to the coaching staff he’s advanced enough to handle playing time so early in his career. Other times opportunity comes out of necessity, caused either by injuries or a lack of depth.

History tells us that only a small handful of rookies will make an impact in 2019. With that, CFL.ca takes a look at 10 players that have a chance to become starters at some point this season.

RECAPPING THE 2019 CFL DRAFT
» View full results from the CFL Draft
» Team by Team: Who landed where?
» Eskimos see transcendence in Betts

With the first No. 1 pick of his career, Argos general manager Jim Popp made it clear he wanted a player he could get under contract right away, and into the lineup sooner rather than later. In other words, Oklahoma State offensive lineman Shane Richards wasn’t picked first overall to sit on the bench.

The Argos’ O-line appears set going into 2019, with a projected four Canadian starters along the offensive line. But the 23-year-old adds a vital injection of youth that the Argos desperately needed, with three of their starters on the wrong side of 30 including a 35-year-old tackle in Chris Van Zeyl.

Richards’ versatility means he should be able to step on the field in different positions throughout games as a backup, while he could push one of the Argos’ veteran in camp for a job.

A second overall pick with local ties, Jesse Gibbon is likely an injury away from starting for the Ticats on day one this season. It happened last year with Darius Ciraco, who started 18 games for the Ticats in an impressive rookie season, and Gibbon has the capacity to do the same following a polished career at the University of Waterloo.

The Ticats go into the season with Mike Filer at centre and Darius Ciraco and Brandon Revenberg at guard, while Americans Avery Jordan and Kelvin Palmer are projected to start at tackle. Gibbon is projected by most to play guard in the CFL, but he was a left tackle in school, leaving plenty of possibilities for the Ticats’ coaching staff.

Wherever he ends up, Gibbon is a pro-ready prospect who should see the field in 2019 as he launches what’s expected to be a long and prosperous CFL career playing for his hometown team.

Receivers take time to develop, that’s a simple fact whether it’s the NFL, CFL or any other professional league out there. It’s why most of the time you don’t see Canadian receivers make a real impact until their second or third year after coming into the CFL — take Nate Behar or Juwan Brescacin for example.

Justin McInnis could be an exception, already physically mature for his age and also coming off a productive career at Arkansas State. The other factor is the obvious need at receiver for the Riders, who head into the season with Cory Watson and Patrick Lavoie as the top nationals on the depth chart.

The Riders’ current roster means either one or both of McInnis and second-round pick Brayden Lenius will have a chance to make an impact at some point during the 2019 season.

Though the Stamps are likely to take a patient approach with their top draft pick in 2019, Hergy Mayala has a chance to push the envelope. Some scouts had graded Mayala as the top receiver available going into last week’s draft, while the Stamps believe they’ve gotten quite a steal at the bottom of the first round.

Mayala, who Calgary general manager John Hufnagel says will line up inside, fits an immediate need following the departure of Lemar Durant to BC, and could form a solid duo with Juwan Brescacin should the team start two Canadian receivers. Of course, Mayala would have to overtake Richard Sindani, Julan Lynch and Austen Hartley first.

Despite the off-season departures of Sukh Chungh (free agency) and Matthias Goossen (retired), Bombers GM Kyle Walters has little to worry about on the offensive line, as the arrival of former first round pick Geoff Gray and the development of young nationals Cody Speller and Michael Couture should provide adequate relief. The Bombers also have the opportunity to start an American inside in Manase Foketi if they so choose.

Now you can add this year’s first round pick to the list in Drew Desjarlais, who was regarded as one of the top offensive linemen in the draft going into last Thursday. Walters said before the draft he was open to competition on the O-line, which could potentially include any new draft pick. Don’t be surprised if Desjarlais, who was one of the combine’s biggest stars back in March, makes a strong push for playing time.

As a mid-second round pick, UNLV’s Kyle Saxelid was drafted right where many expected. He may not have the ceiling of some of the top prospects, but the perception will change quickly if he can become a starting tackle down the road, a luxury only a couple of teams across the CFL can afford.

Tackle, guard, it’s a little early to say what the Eskimos plan for the 6-foot-7, 299-pound offensive lineman, but Saxelid’s versatility could come into play as early as this season. The Esks project to start three Americans on their O-line with Matt O’Donnell and David Beard slotted in as starters, but plans can change quickly, and a strong camp could put Saxelid ahead of Jean-Simon Roy, Jacob Ruby and Mason Woods on the depth chart.

While his name surfaced late after becoming draft eligible at the last moment, David Ungerer is an intriguing receiver prospect in a pass-happy offence. The 5-foot-10, 171-pound receiver is coming off a productive season with Idaho, having recorded 69 catches for 697 yards and four touchdowns — including four games of nine or more catches.

We saw regional combine star Justin Buren work his way onto the field last year for the Ticats, while another Canadian in Mike Jones had a career season in June Jones’ explosive downfield offence. If he can out-perform Shamawd Chambers and free agent addition Brian Jones as Canadian receivers righting for reps in Hamilton, Ungerer could go from draft mystery to CFL household name.

After labeling receiver as one of his biggest priorities going into the draft, Kavis Reed must be happy with how things unfolded. The Alouettes’ general manager was able to land both Kaion Julien-Grant and Chris Osei-Kusi, considered two of the draft’s better prospects at the receiver position.

Julien-Grant showed off both his natural ability and polished route-running at the CFL Combine back in March, making him a candidate to start at some point in 2019, possibly even right out of camp. Osei-Kusi, meanwhile, booked himself an NFL rookie camp thanks to his testing measurables and big-play ability.

While the Als do have the ratio flexibility to start an all-American receiving corps, either Julien-Grant or Osei-Kusi could change their approach with a strong training camp. It’s reasonable to expect one of these draft picks to become a starter in 2019.

The star of the Western Regional Combine, Shai Ross has the natural athletic ability to become an effective receiver at the next level. Ross was well-coached at the University of Manitoba and should be able to make the jump to the professional ranks thanks in part to a time of 4.63 in the 40-yard dash, clocked in Edmonton back in March.

Should the Eskimos opt to start two Canadian receivers, which they did occasionally last season, Tevaun Smith and Natey Adjei would be the first to get starting roles with the veteran Anthony Parker close behind. But if Ross can open some eyes at camp, his speed could become a weapon for new starting quarterback Trevor Harris.

An eighth-round pick may be a stretch to start at all in the CFL, but there’s a case to be made for running back Jamel Lyles, who had a productive 2018 season with 619 yards on 112 carries (good for 5.5 yards per carry) at the University of Manitoba. In addition to a strong university career, Lyles also turned heads at the combine with his strong, physical playing style.

With a 40-yard dash time of 4.64, speed won’t prohibit Lyles from making an impact at the next level, while his versatility as a blocker, receiver and special-teamer should keep him on a roster at least in a developmental role. The true question for Lyles will be the same as for any Canadian running back: will he get an opportunity to start and become an every-down back?

The Lions’ backfield looks set for the season, with John White and Brandon Rutley firmly entrenched at the top of the depth chart. But things can change in the blink of an eye, and if Lyles makes a statement in May and June, the ratio benefits of a Canadian starter can’t be ignored.